To Escape an IntractableWorld Situation? A CompletelyNew Paradigm of Thinking!

May 18—The number of increasingly complex and directly or indirectly related crises is on the rise: after the U.S. embassy’s transfer to Jerusalem, the Israeli army’s murderous crackdown on Palestinian demonstrators in the Gaza Strip, and military strikes against Hamas institutions, the worst-case scenario would be a war between Israel and Iran, which has the potential to spread further. At the same time, the hopeful perspective of a peaceful solution to the Korean crisis was torpedoed by National Security Advisor John Bolton with his provocative reference to the Libyan model as a blueprint for North Korea. The unilateral cancellation of the nuclear deal with Iran by the Trump administration naturally has an effect on North Korea; and the potential secondary sanctions against European companies operating in Iran, in addition to those affected by Russia’s sanctions, threaten to trigger an escalation of the spiral of sanctions and further shatter the trans-Atlantic relationship—and above all this, hangs the sword of Damocles of a new trans-Atlantic financial crash, the “ticking time bomb” of the derivatives, of which Pope Francis now also warns in a new document. 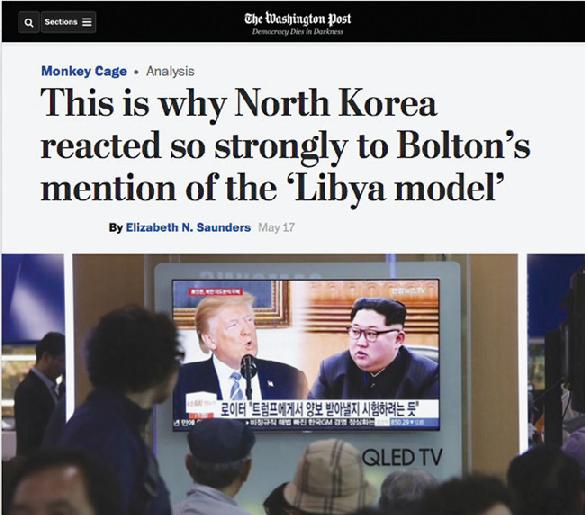 In the case of the North Korea situation, it is difficult to believe it was just a blunder by Bolton: After the very successful summit between the presidents of North and South Korea in Panmunjom on April 27 and the equally productive visit of U.S. Secretary of State Pompeo to Pyongyang, the outlook was very good for the planned summit between President Trump and President Kim Jong-un on June 12. Bolton’s assertion that the Trump administration’s policy towards North Korea follows the Libya model—knowing that the entire purpose of Kim Jong-un’s nuclear weapons program was to avoid the fate of Saddam Hussein and Qaddafi—had the effect of a grenade, as one might expect.

Bolton was apparently referring to the 2003 agreement, in which Qaddafi gave up his nuclear weapons program, still in its initial phases, while Trump was more likely referring to the NATO intervention in 2011, which ended with Qaddafi’s assassination by U.S.-backed rebels. But Trump’s correction of Bolton’s statement, saying that the Libya model is only an option if North Korea does not give up its nuclear program, is unlikely to restore confidence, particularly in combination with the planned U.S.-South Korean military maneuvers three weeks before the planned summit—which, while somewhat reduced in scope, are still taking place. The way this affair developed is typical of the way in which attempts are still being made to force Trump into the establishment’s agenda. 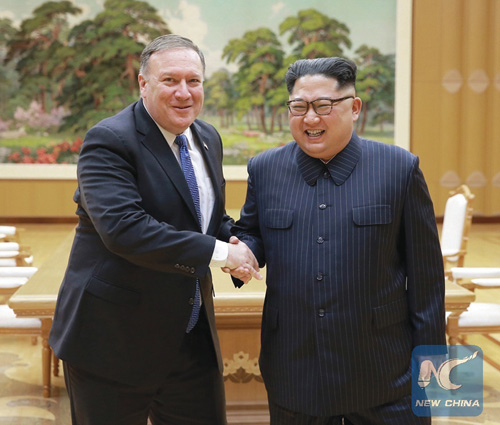 Whether one can trust the United States to adhere to its concluded treaties is one of the most debated issues of the day, given the unilateral termination of the nuclear deal with Iran. It was only in 2017 that the Washington National Security Archive released new documents dating from the end of the Soviet Union, which clearly demonstrate that clear commitments were made to Soviet leader Gorbachev at that time “not to move NATO one inch to the east,” as then Secretary of State James Baker had expressed it. But unlike Baker, Trump is not a neoconservative, in fact he won the election against the American establishment, and he has pledged to replace the canceled Iran deal with a better one. But what would such an agreement have to look like to represent an actual solution for the situation in Southwest Asia? 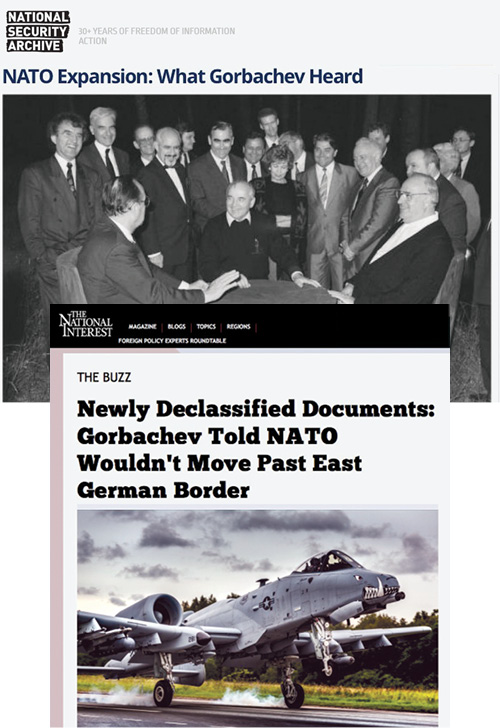 Another aspect of this interconnected and complicated situation is the threat of sanctions against European companies that have invested in or are doing business with Iran. The EU is now engaged in a counter-offensive to activate the “blocking statute” adopted in 1996, a law prohibiting entrepreneurs from EU countries from submitting to unilaterally imposed U.S. sanctions. For example, if a company withdraws from its business in Iran in order to avoid being prosecuted in the United States if it is also active there at the same time, it would have to expect legal consequences from the EU. German and other European companies are also under tremendous pressure, as a result of the recent, unilateral U.S. sanctions imposed on Russia on April 6.

Trump has virtually no influence on these sanctions, and his constitutional right to formulate U.S. foreign policy was taken away from him by an earlier Senate vote that overruled his veto. However, this is never reported by the mainstream media, but instead exploited in the daily anti-Trump propaganda.

These sanctions hit around 60% of all Russian companies. Thus, e.g., Rusal, the aluminum concern of Russian oligarch Oleg Deripaska, which is on this list, accounts for nearly 40% of the primary aluminum processed in Europe. Within about ten days, the price of aluminum on the world market rose by almost 30%, forcing a cutback for a number of companies. Russia, on the other hand, began to take countermeasures by imposing sanctions on companies that comply with American or generally foreign sanctions. German Minister of Economics Peter Altmeier voiced extreme criticism of the “blocking statute” activated by EU Commission President Juncker, which he fears could lead to a “race for sanctions.” Chancellor Angela Merkel, for her part, warned against any illusions that the affected companies could be financially compensated.

The new U.S. ambassador in Berlin, Richard Grenell, had been in office for only a few hours before issuing an order, in the manner of an imperial governor, for German companies to withdraw immediately from Iran. And Sandra Oudkirk, head of the U.S. Department of Energy Resources Bureau, made it clear that the United States will do everything possible to prevent the construction of the Nordstream II gas pipeline from Russia to Europe. She promised that the United States would use all of its powers of persuasion. Despite the show of confrontation against Trump, EU leaders at the recent Sofia summit in Bulgaria rushed to offer the United States accelerated imports of liquefied gas from slate fracking, which of course is being developed as an alternative to natural gas supplies from the Nordstream II pipeline.

Another geopolitical theme of the Sofia-EU summit was how to prevent the West Balkan countries from pursuing their economic and political interests via closer links with Russia, China and Turkey. 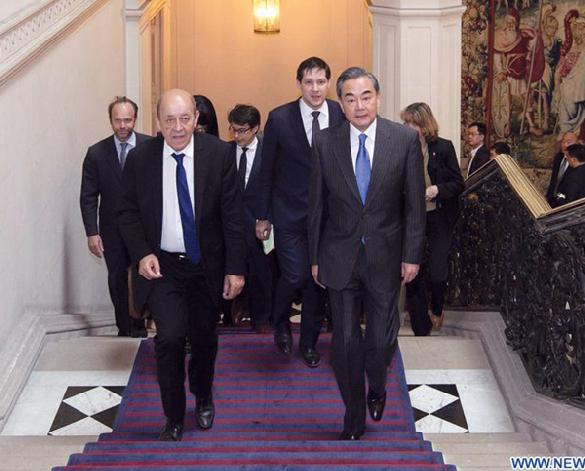 A New Paradigm Reflecting the Character of Humanity

Given this seemingly intractable situation, which can only be outlined here in brief: Is there any possibility of a solution, any path that does not necessarily lead to a major Western war against Russia and China? Certainly no such approach was offered at the recent EU summit in Sofia, where the geopolitically motivated position held that the countries of the Western Balkans must absolutely be prevented from orienting towards Russia and Turkey (author’s note: and of course China).

As Lyndon LaRouche emphasized many years ago, we can only overcome the confusing jungle of various geopolitical games by establishing a higher level of the common goals of humankind, on which the world’s most important nations, especially the United States, China, Russia and India, can work together. Therefore, the announced summit between Trump and Putin is the most urgent step to tackle the numerous crises. As Chinese Deputy Prime Minister and State Councilor Liu He emphasized on his recent visit to Washington, the close personal friendship between Trump and Xi Jinping is of paramount importance. The close strategic partnership between Russia and China and the first steps towards reorienting India towards China are further building blocks for overcoming geopolitics.

The key to overcoming all the crises mentioned here—from North Korea and Southwest Asia to the threat of trade and sanctions wars and the threat of a new financial crash—lies in the cooperation of European nations and the United States with China’s New Silk Road Initiative. As Chinese Foreign Minister Wang Yi has just said in a joint press conference with his French colleague Le Drian, the volume of trade in this initiative has exceeded $4 trillion in just under five years since its inception. “Given the international situation, which is characterized by uncertainty, the Economic Belt Initiative offers a new path for common development and prosperity, and has demonstrated tremendous momentum and prospects of success,” Wang Yi said.

The idea of the New Silk Road is deliberately designed to overcome geopolitical rivalries and replace them with cooperation for mutual benefit. Very much, perhaps everything, will depend on whether there are enough people in Europe and the United States who can rid themselves of the idea that politics is always a zero-sum game in which one party wins and the other loses. We will only have a positive future if we usher in a new era of international cooperation that reflects the character of humanity as the only known creative species.