This article appears in the June 1, 2018 issue of Executive Intelligence Review.

Developments in Italy Offer Chance for a Reorganization in Europe

Written one day before the EU blocked Italy’s popularly-elected government.

May 26—It is no coincidence that the reactions to the proposed new government in Italy from neo-liberal circles are as hysterical as the reactions to Trump’s election victory were. There are two options now: financial warfare, as some suggest, and thus the end of the euro and the EU, with the risk of developments occurring such as those during the 1920s and 30s; or the positive, programmatic approaches in the coalition agreement of the Lega and Five-Star Movement—such as the Glass-Steagall Act and a national investment bank—to carry out the already urgent reorganization of the trans-Atlantic financial system. 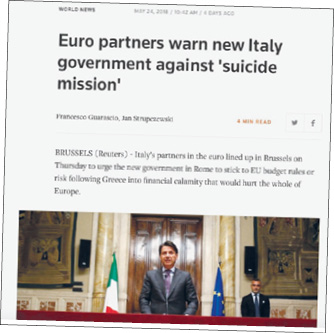 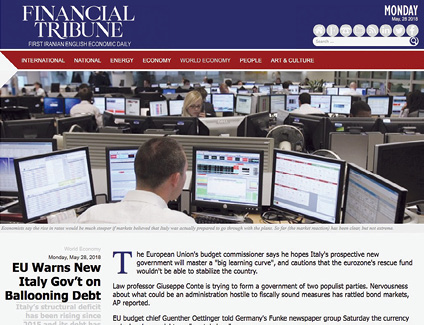 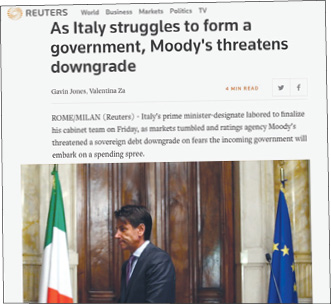 In an astonishing combination of arrogance and economic misunderstanding, politicians and media representatives have threatened to put Italy on a tight rein from Brussels (Claus Kleber on ZDF); suggested that the new government was on a “suicide mission” (Spiegel); that “the putative government’s legislative program would plunge the country into insolvency so quickly that it is widely regarded as a joke” (London Times); that Italy has its proverbial dolce far niente [“idle sweetness”] financed by others, which is “aggressive freeloading” (Jan Fleischauer in Spiegel); or—in an undisguised threat of financial warfare—“If necessary, the financial markets would put them back on the path of virtue” (Daniel Caspary, Chairman of the CDU-CSU group in the European Parliament); “A storm is brewing,” no solidarity with Italy if it changes course (Elmar Brok); or, “a government program for the document shredder” (Deutschlandfunk).

It is food for thought when circles that normally can’t stop harping on the alleged lack of democracy in China, have no problem deriding the electoral decision of an EU member state.

These representatives of the neo-liberal establishment are obviously as incapable as Hillary Clinton of reflecting on the reasons why voters reject a policy they see as an attack on their standard of living and their prospects for the future. The revolt against this policy (which serves the interests of banks and speculators) has continued since Brexit in a series of similar voting results: the electoral victory of Donald Trump, the “No” vote on the constitutional amendment in Italy, the election in Austria, and just now the election in Italy. 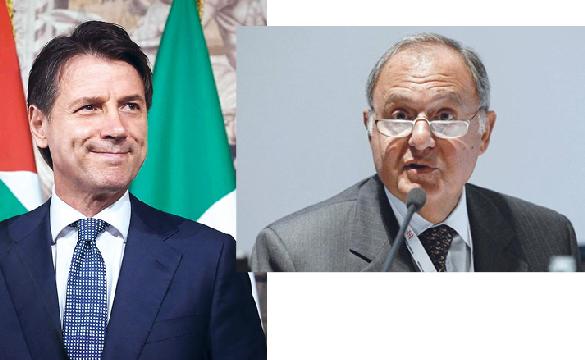 The reason that two Euroskeptical parties won there is obvious. The experience that Italy has had with the austerity policy imposed by Brussels and former German Finance Minister Wolfgang Schäuble has been negative. Thanks to compliance with the Maastricht criteria, the Italian economy went from growth to stagnation and then sank into recession. Actual unemployment is around 20%, and youth unemployment in the South is 60%. More than 250,000 Italians emigrate per year, which obviously represents a massive weakening of economic potential, and the health care system has deteriorated massively.

In addition, Italy feels totally abandoned by the EU on the refugee issue. Over the years Italy has been a prize pupil of the EU, achieving a steady primary surplus and a balanced or even positive trade and payments balance, but nevertheless economic output has fallen since the introduction of the euro. Thanks to the budgetary discipline required by the EU, the average income has fallen behind that of Spain and industrial production is 20% below that of 2008. This “discipline” has also widened the gap between the industrialized North and the less developed South.

The best example of the change in sentiment towards the EU and the European Monetary Union is economist Paolo Savona, who went from being pro-Euro to a staunch opponent when he saw the consequences for Italian economy and society. Savona, who was a banker and a minister in previous governments, proposed a “Plan B” if staying in the euro proved to be too painful for Italy. He also described the euro as a “German prison” for Italy. The Manager-Magazin described him as a “true Euro-fright.”

But much more appropriately, the former chairman of the Italian metalworkers union, Giorgio Cremaschi, sent out a tweet, commenting: “The fact that a moderate like Paolo Savona, a supporter of La Malfa and a minister in the Ciampi government, is today considered a public enemy of the EU & Co., is a sign of how far to the right the policy has drifted in Italy and Europe, after decades of neo-liberal policies by center-left and center-right governments.”

A Crash of ‘Biblical Proportions’

The truth is, that in the case of Greece or of Italy, it was never about saving those countries—it was always about the banks. It is interesting to note that the first initiative of the new Prime Minister Conte was to meet with the victims of the bail-in operations which the EU had ordered earlier Prime Ministers Renzi and Gentiloni to undertake against small savers in banks and savings banks in Tuscany and the Veneto region. Conte promised them that they would be entitled to protection for their savings, which often took a lifetime of work to accumulate, and which are guaranteed by the constitution. Those who were betrayed or deceived, he said, would be compensated.

While the neo-liberal protagonists are working themselves up about Italy, we should instead be glad that there is an important government in Europe that is considering solutions to the looming financial crisis. Because the next crash could happen at any time and tear down the foundations of our societies. The business blog, Mauldin Economics. joined those sounding the alarm, speaking of a new financial crash of “biblical proportions” in view of the enormously increased debt, especially corporate debt.

Perhaps it would be a good thing for the parties in Germany who have a “C” for “Christian” in their names, to pay heed to the recent paper of the Vatican Congregation for the Doctrine of the Faith, which warns that the banks’ derivative transactions are a “ticking time bomb,”and that the current financial system is totally unacceptable, both economically and morally. Another aspect was emphasized by President Putin in his speech to the St. Petersburg International Economic Forum, where he warned against the effects of sanctions and the unilateral break with previously accepted rules [by the U.S. Senate]. This could trigger a systemic crisis that the world has never seen, he warned, or at least not for a long time.

Perhaps the turmoil and changes at the Deutsche Bank are an indication of the realization among some of those responsible, that the neo-liberal course was the wrong track. Two years ago, Lyndon LaRouche demanded that the German bank return to the tradition of former chairman Alfred Herrhausen, and its reducing its investment banking business today is definitely a step in the right direction. But the clock is ticking. The social protests in France should be a warning that people no longer want to accept policies that favor the speculators. 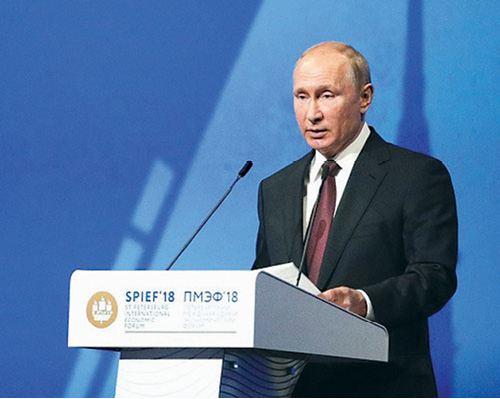 What is needed is the full program proposed by Lyndon LaRouche in the “Four Laws”: in capsule summary, a banking separation law in the tradition of Glass-Steagall, a National Bank for investment in the real economy, an international credit system, and a massive increase in economic productivity through crash programs for nuclear fusion and international space cooperation.

Even if it is difficult to imagine where such a reorganization should come from in Europe, given the prevailing ideologies in Brussels and, unfortunately, Berlin, it is existential. President Trump has repeatedly promised to reintroduce the Glass-Steagall Act and Alexander Hamilton’s American System of economics. As the turmoil surrounding the Italian government’s program is sure to increase, this will provide the opportunity to put a reorganization of the hopelessly bankrupt transatlantic financial system on the agenda—provided that there are enough citizens who support the efforts of the BüSo party and the Schiller Institute.

Another aspect, which has a lot to do with the issue being addressed here, is the fact that China is in the process of completely transforming its population policy. Chinese media report that the previous demographic policy of allowing only one, and then two children per family is now considered completely wrong. This policy was formulated under the impression that there are only limited resources, so that every additional person is a burden. However, this has given way to the realization that every additional child represents an enormous creative potential and thus a gain for the entire society. Young people, especially, are a tremendous source of creativity, and the more people there are, the more exuberantly is creativity inspired. That viewpoint is absolutely in line with the concept of LaRouche’s “relative potential population density.”

As the President of the European Chambers of Commerce and Industry, Christoph Leitl, has just correctly stated, as long as Europe itself remains innovative, there is no reason to be afraid of the United States or China. But Europe’s creative potential and neo-liberal ideology are incompatible. Support the BüSo, so that the outcome of this issue is positive. If we can not even establish win-win cooperation in Europe, we need not be surprised that China is more attractive to many countries.