Xi Jinping, AestheticalEducation, and Africa—And the Deep Moral Crisis of the West

Sept. 1—While the political establishment in Europe still sees itself as the sole possessor of the only true wisdom regarding the alleged superiority of “Western values,” more and more so-called “ordinary citizens” have long realized that there is an ever wider gap between the official depiction of events by politicians and the media, and reality as it presents itself in different aspects of life. The negative media coverage of China and the New Silk Road might also be fake news. In fact, between these so-called “Western values” and the concept of the “New Silk Road,” there is a clash of two diametrically opposed sets of values and two completely different images of mankind.

For the past ten years, and more intensively over the past five, China has been involved in many infrastructure projects as part of its Silk Road Initiative, including railway lines, industrial parks, hydropower plants, and the industrialization of agriculture in Africa. African heads of state, as well as the populations, have a completely new sense of self-assurance: for the first time they see a realistic chance of overcoming poverty and underdevelopment in the foreseeable future. Thanks to Chinese aid, a number of African states now aim to achieve a very good standard of living for their entire populations in the medium term.

On the eve of the FOCAC summit, which 53 African leaders are expected to attend in Beijing, Ghana’s ambassador to China Edward Boateng, in a Global Times commentary, expressed the spirit of the New Silk Road which has taken hold of the African continent: “The Chinese believe it is possible for a country like Ghana to be transformed into a technologically developed and modernized economy within a generation;” 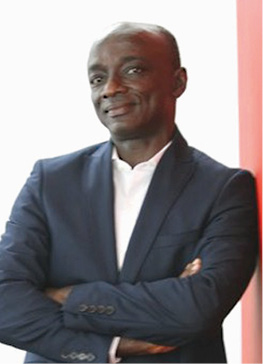 In the year since he was accredited ambassador in China, Boateng has visited more than 16 provinces and many cities to study the success of the “Chinese economic miracle.” As he summed it up in the GT commentary, “I believe that Ghana could use China as a mirror to reflect on how we can achieve a similarly successful development path. I note, in particular, the fact that China has been transformed into a major economic and technology powerhouse, and how it has still been able to maintain distinct aspects of its rich culture.”

Boateng emphasized that building a strong manufacturing base, investing in human capital, widespread discipline, a serious approach to problem-solving at all levels, unceasing innovation, economic growth, and infrastructure development have all contributed to the success. He further stated that China’s “discipline of purpose” and confidence in its cultural/traditional and humanistic values is part of a mindset which would greatly benefit Ghana. He recalled that Ghana was the first African country to throw off the yoke of colonialism, and that its founding president, Dr. Kwame Nkrumah, had been the father of Pan-Africanism, which sits deeply in the conscience of Africa and the Africans. 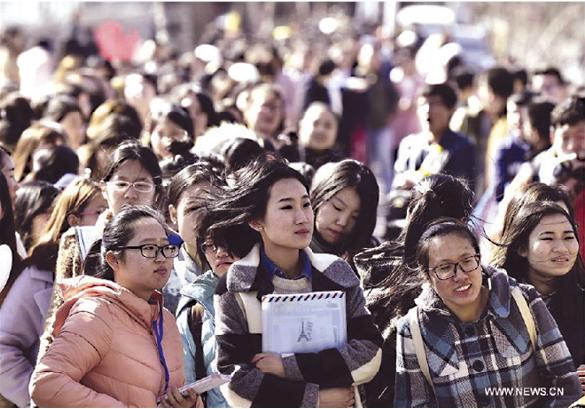 China upholds its classical tradition, but Germany does not, writes Zepp-LaRouche. Here, Chinese youth in Beijing.

Colonial Thinking in the West

Of course, Europeans would have been able to develop the African continent infrastructurally and industrially, just as China has done for ten years now. What prevented them was the persistence of colonial thinking, as expressed in the IMF’s brutal credit conditionalities and the World Bank’s anti-development policies. While China and the African countries emphasize their deep-knit friendship, the few Europeans who are beginning to wake up to the gigantic changes in Africa seem to worry, at best, that China and other Asian countries are securing access to Africa’s raw materials.

During his recent trip to Africa, which took him to seven countries, German Development Minister Müller criticized the EU’s and the German government’s Africa policy, which has consisted of erecting walls against the refugees. “In the next ten years, more will be built in Africa than in the whole of Europe in the last hundred years,” stressed Müller. He said he had seen in Mozambique the great resources that this continent has at its disposal; the Chinese, Indians, Japanese, and Americans are already here, he said—only the Germans are not, and they are missing out on many opportunities.

Chancellor Merkel, who was traveling at the same time to Senegal, Nigeria and Ghana, where she met up with Müller, had the sudden realization, after meeting Ghana’s President Nana Akufo-Addo, that the EU would only have a prosperous future if it were possible to “manage” the question of migration and the question of a partnership with Africa; otherwise she does not believe that the cohesion of the EU can be guaranteed. 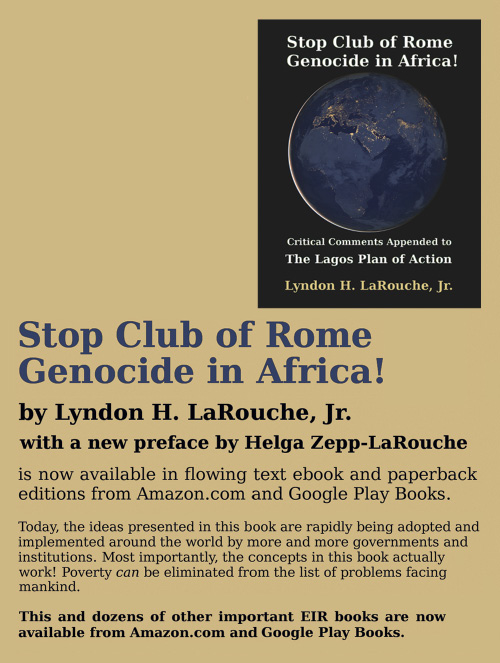 Buy Stop Club of Rome Genocide in Africa from Amazon.com

But it remains to be seen what this “managing” means concretely, and whether it goes beyond the cynical policy of the past, which was only arrangements with African governments on stopping migration and on the construction of refugee camps, which Pope Francis has already compared with concentration camps. The latest proposal from the German government’s Special Representative for African Affairs, Günter Nooke, which seriously proposes a new colonialism (Reuters, Aug. 29), does not bode well: “Why not set up special development zones there, in which countries give up their sovereign rights for 50 years, and the EU could perhaps guarantee the legal framework for investments by foreign companies?”

Even more outrageous, however, is the article “Towards ‘Eurafrica’ ” in the Bayernkurier of Aug. 26, which essentially repeats the horrendous theses of Stephen Smith’s recent book La Ruée vers L’Europe (The Rush to Europe: Young Africa on the Way to the Old Continent). Africa is experiencing the “most rapid population growth” the world has ever seen, the article states; there is a “population explosion” and a “youth surplus.” With their development aid, “the rich countries are shooting themselves in the foot,” Smith writes in his book. “By helping poor countries reach the threshold of wealth which allows people to start leaving in the first place, they are subsidizing migration.” He views the “return of protectorates” (which Nooke also calls for), as the only way to ward off the “storm surge of migrants,” and believes the EU could make deals with African “dictators” [to stop migratory flows in exchange for becoming protectorates].

Obviously, the Bayernkurier is not above mobilizing in the spirit of Björn Höcke (of the Alternative for Germany party), barely seven weeks before the state legislative election in Bavaria. In other words: development aid, let alone investment, should be avoided—it is better that people stay poor and die as soon as possible. Are these the “Christian values” with which the Bayernkurier wants to support the election campaign of the Christian Social Union Party?

A totally different message was delivered by China’s leading news agency, Xinhua on August 31. It reported as the top news of the day that President Xi Jinping, in a letter to professors of the Chinese Academy of Fine Arts, stressed the importance of aesthetical education for the sound physical and mental development of youth. Aesthetical education, he wrote, plays an important role in the formation of a beautiful mind, a beautiful soul.

And even though one would never suspect this in the illusory world that the mainstream media in Germany is trying to maintain, the world is moving swiftly in the direction that Lyndon LaRouche and his association have fought for, for decades. China today is implementing the policy that we had published in a book on the industrialization of Africa in 1980, and have since presented in many conferences, and in the state election campaign of the BüSo in 2009 under the slogan: Hesse’s future lies in Africa! 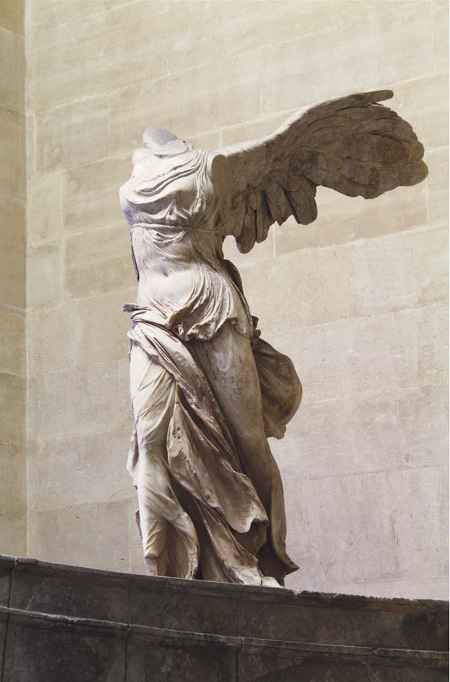 As a work of classical art, the Winged Victory of Samothrace (2nd Century B.C., ancient Greece, now in the Louvre in Paris), symbolizes the aesthetical education essential for the formation of a beautiful mind—almost lost in Europe today.

And the emphasis on aesthetical education by President Xi also proves this author’s thesis, presented in a speech in New York in April 2017, that there is a great affinity between the image of man and the aesthetical education method of Confucius, and those of Friedrich Schiller.[fn_1] The difference is that China upholds its classical tradition, while in Germany we have moved far away from our classical-humanistic culture. But perhaps it is not too late—we just need to bring Nicholas of Cusa, Kepler, Leibniz, Bach, Beethoven, Schiller, and von Humboldt, to name a few, back to life in the minds and the souls of our youth. We must place more emphasis on their aesthetical education, rather than on preparing them for a career to earn as much money as possible, and to satisfy all desires in the here and now. If you, dear reader, can agree with these lines, you should become active with the Schiller Institute.