This article appears in the November 9, 2018 issue of Executive Intelligence Review.

Are We Sleepwalkers?What Have We Learned fromHow World War I Broke Out?

by Helga Zepp-LaRouche, Chair of the International Schiller Institutes 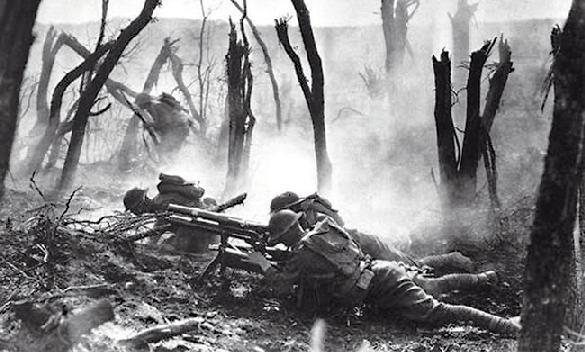 NARA
U.S. Infantry, World War I in the Meuse-Argonne Forest.

Nov. 3—Only five days after the landmark congressional election in the U.S., which will be decisive in determining the course for either war or peace, Presidents Trump and Putin will meet in Paris on the anniversary of the end of the First World War. Among the topics of discussion will be the unilateral termination of the INF Treaty by the United States, and, it is hoped that these two leading nations, despite an extremely strained international situation, can ensure that humanity will be spared a third World War, this time one that can wipe out humanity.

During my recent trip to Moscow, in several meetings with representatives of leading institutions, I had the opportunity to get a first-hand impression of how the strategic situation looks from the Russian perspective. From the various steps taken by the West and NATO—the extension of NATO to the borders of Russia, the establishment of the missile defense system in Romania and Poland (which can be transformed into an offensive system within a very short time), the termination of the ABM and now the INF Treaty, as well as the various “narratives” portraying Russia as an enemy and Putin as a demon—the Russian leadership has clearly concluded that a major war cannot be ruled out. 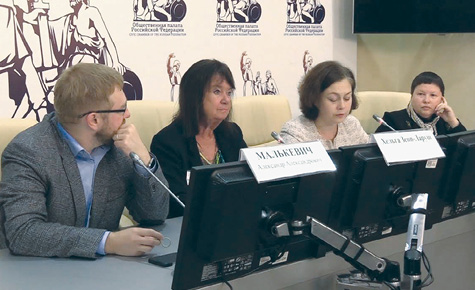 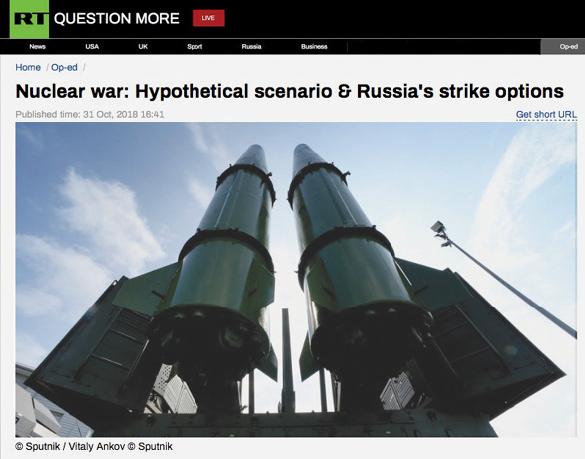 On October 31, Mikhail Khodarenok, a Gazeta.ru military commentator, published a sobering account on RT.com of the technical process which would take place under emergency war conditions, under the title: “Nuclear War: Hypothetical Scenario & Russia’s Strike Options.” He stressed that there were no financial, territorial or ideological contradictions between the U.S. and Russia that should lead to a massive nuclear strike, but then Khodarenok went on to detail the sequence of decisions, coded procedures, and sealed orders, which would lead up to the launch of the nuclear arsenals. The moment a massive attack of ICBMs from U.S. territories and submarines is registered, the targets in Russia and the flight time are calculated. The Russian leadership decides upon “launch on warning,” and in seven to nine minutes, Khodarenok explains, there will be a massive counter-strike with strategic nuclear weapons from Russian territory and adjacent waters.

In the worst-case scenario, Khodarenok continues, the political and military leadership is cut off from communications and unable to issue the necessary orders. In this case, the perimeter system, or its modern equivalent, will be activated—an installed nuclear weapons command system originally developed during the Cold War, which would automatically trigger an all-encompassing counter-strike. Khodarenok concludes that all options for the use of nuclear weapons would mean a disaster for the parties involved and other nations around the world. Nuclear winter would set in a short time after the nuclear exchange and threaten the lives of the few who survived the nuclear Armageddon.

Khodarenok thus points to the current readiness of this mechanism, whose existence was common knowledge during the Cold War, but which has since given way to the fantasy of a “winnable tactical nuclear war.” 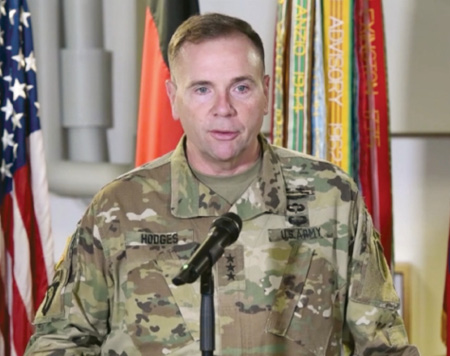 The former commander of the U.S. troops in Europe, Lt. Gen. (ret.) Ben Hodges, appearing recently at the Security Forum in Warsaw, said quite matter-of-factly that the likelihood of war with China in 15 years is very high. Answering a question from the U.S. Daily Beast, Hodges said his intention was to make it clear to Europeans that a simultaneous war with Russia and China would entail the deployment of the greater part of the U.S. arsenal in the Pacific.

Given the accumulation of such belligerent statements by various military personnel (especially American and British), as well as numerous provocations such as the current NATO maneuver “Trident Juncture,” which simulates an attack on a NATO member by “some country,” it is high time to acknowledge that any use of nuclear weapons would set the “doomsday mechanism” into motion. We need only reference the argument of U.S. military analyst Ted Postol, that it is in the nature of nuclear warfare for an emergency to lead inevitably to the use of all weapons.

On the occasion of the centenary of the end of the First World War, whose history began with the dismissal of Bismarck in 1890, followed by a quarter century of British-inspired geopolitical manipulations—from the Entente Cordiale, through the Triple Entente, the Russo-Japanese War of 1904-05, to the Balkan Wars, until finally, the shot fired in Sarajevo, which was only the trigger—it is important to keep in mind how easily mankind “sleepwalks” on a prepared chessboard into catastrophe. None of those who were involved in the First World War could have foreseen its course, but especially for the German and French soldiers who slaughtered each other for four years in senseless trench warfare, this war meant the total uprooting of a whole generation. The ground for the seizure of power by the National Socialists and for the Second World War was prepared.

In Russia, the experience of the “Great Patriotic War,” which killed 27 million Russians, is still fully felt today, even among the young generations. In the West, on the other hand, the attitude of the representatives of the generation who consciously experienced World War II, is very different from that of the post-war generations. For many younger people, the idea of war is at best as “virtual” as their video games. Otherwise, it is impossible to understand why the contrived narrative about Russia and Putin, despite its unrealistic consequences, is parroted with downright pathological “groupthink” in the “western” establishment. 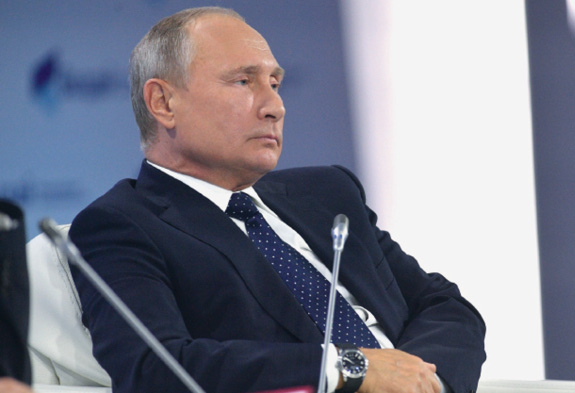 In contrast, in Russia, despite the recent resentment towards Putin over his raising of the retirement age, the overwhelming majority of the population sees in him the man who saved the nation, by freeing it from the dreadful decade of the Yeltsin era. Largely forgotten in the “West,” but fully present in Russian consciousness, is the shock therapy induced by the International Monetary Fund, with which Jeffrey Sachs reduced Russia’s industrial capacity by 70% during 1991-94. The resulting collapse of the demographic curve—the Russian population shrank by one million people per year—was experienced by the population as genocide.

On the contrary, Putin is seen as the president who, at least politically, has contained the power of the oligarchs, and has nullified the West’s plans to reduce Russia from the superpower status it enjoyed in Soviet times, to a commodities-exporting Third World country. In Russia, Putin is loved and admired for this, but for the geopolitical establishment of the “West,” which believed that it had already seized control of Russia’s enormous mineral deposits, this is the real reason for Putin’s demonization.

According to a recent Military Times survey of active U.S. military personnel and officers, 46%, almost half, are convinced that their country will be drawn into a major military conflict with Russia in 2019. Colonel (ret.) Rolf Bergmeier, formerly a Colonel of the German General Staff and Deputy Head of Planning and Leadership at NATO, recalls in a critique of the latest NATO maneuver “Trident Juncture,” which he describes as an unnecessary provocation, that in the current NATO strategy for a war between East and West, Germany would be the nuclear battlefield.

For former presidents Reagan and Gorbachov, who signed the INF Treaty in 1987, it was clear that a nuclear war could not be won. With the threatened termination of the INF Treaty by the U.S., we could very quickly find ourselves in a situation that parallels the mid-range missile crisis of the early 1980s, when hundreds of thousands took to the streets because they knew that Germany would be wiped out in a war between East and West. Today, the overall situation is far more dangerous: will we sleepwalk this time into the Third World War?

We should take the anniversary of the end of the First World War as the occasion to realize the necessity of overcoming geopolitics and replacing it with a new paradigm of the idea of mankind as a whole. The Chinese president’s concept of the Community of Common Destiny for the One Future of Humanity, which underpins the New Silk Road initiative, defines this new paradigm as a completely new form of international relations through cooperation for mutual benefit. If we have learned anything from the tragedies of the twentieth century, then we must learn to think differently about mankind.