Europe Can Only Survive Through Cooperation, Not Confrontation!

by Helga Zepp-LaRouche, Founder of the Schiller Institute

Nov. 24—While France’s increasingly unpopular President, Emmanuel Macron, prophesies the need for a chimerical “European army” to defend Europe against “China, Russia and even the United States of America,” his finance minister, Bruno Le Maire, is gushing about the need for Europe to become a “good empire”—and Germany’s Angela Merkel, still Chancellor, has discovered relatively late in her career that Europe must take its fate into its own hands. It is increasingly obvious that the Western neo-liberal system is in a collapse phase, while its Establishment has lost touch with the real world, and has no inkling of why there is such unrest among its citizens. 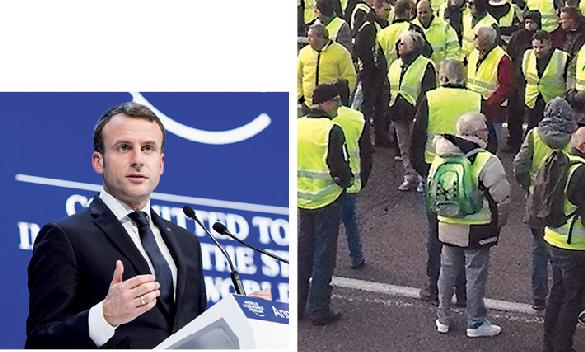 In France, motorists and truck drivers, farmers, fishermen, and mayors are donning yellow vests and blocking traffic as a protest against Macron’s economic policy that benefits the financial sector, but no longer allows average people to provide for even their basic necessities. The yellow-vest movement has already spread to Belgium, and similar demonstrations are taking place in Bulgaria. In Greece, the population is completely disillusioned with the EU, whose austerity policy has led to a 42% collapse of average household income since 2009—almost halving over nine years!

The Italian government, which was elected because of its rejection of the EU austerity policy, is committed to an investment and moderate growth program that would allow new borrowing to rise to 2.4% of GDP, instead of the 0.8% demanded by the EU Commission, but which still remains lower than the 3% maximum defined by the Maastricht Treaty. European Commissioner for Finance Pierre Moscovici’s attitude toward Italy could hardly be more arrogant (“I am not Santa Claus”), and there is a fight ongoing in the European Central Bank over how far the confrontation with Rome can be taken. If it goes too far, Italy might ultimately be pushed to leave the Eurozone.

Given the protests brewing against years of austerity programs, Macron’s demand for greater European integration—for further “pooling of decision-making power” in foreign, migration and development policies, and in a growing part of the budget and even tax revenues—will only intensify the centrifugal forces in Europe. 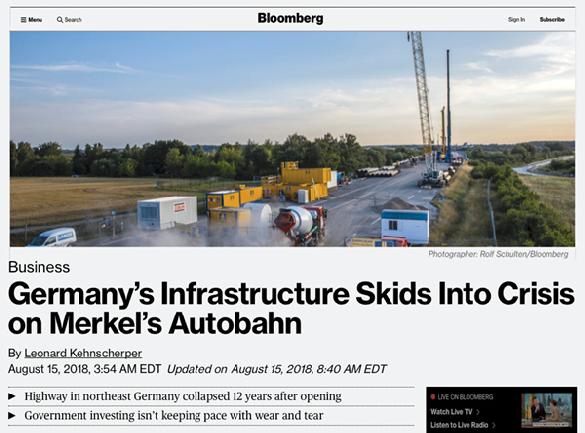 After all, not even in Germany—the country which supposedly benefits from EU policy—has the neo-liberal austerity policy of former finance minister Wolfgang Schäuble and his worthy successor Olaf Scholz, brought about anything positive. While leniency toward the banks and businesses guilty of the “Cum-Ex” tax fraud was apparently astonishingly widespread, Schäuble’s policy of “black zero” [zero deficit budgeting, or budget-balancing] has had far worse consequences for the public interest. Around 20% of Germany’s motorways and 40% of its federal highways are in need of renovation; thousands of bridges are no longer safe; many schools and their sanitation facilities are decrepit; the shortage of personnel in hospitals endangers the health of the patients; and Germany’s geriatric care is headed toward a (predictable) absolute disaster. The 13,000 new jobs in that sector announced by health minister Jens Spahn are not even the proverbial drop in the ocean.

Lack of affordable housing, shortages in energy supply, lack of daycare facilities and staff, and lack of police personnel—the list of the “success stories” of the “black zero” goes on and on.

In the EU and Britain

In the EU, a total of 90 million live below the poverty line, amidst a growing gap between the rich and the poor. The UN Special Rapporteur on extreme poverty and human rights, Philip Alston, published a report on British poverty on November 16. Fourteen million people live in poverty there, and their numbers are rising. 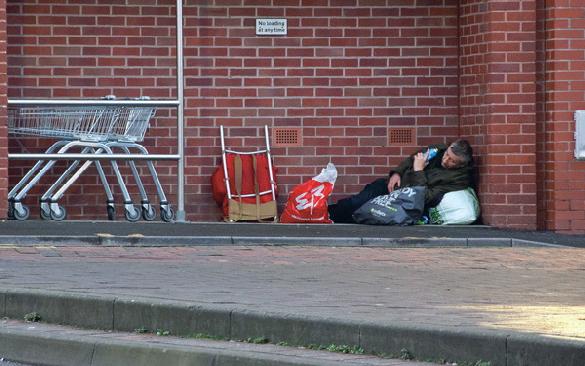 CC/Roger A. Smith
Rough sleeping in an alcove in Barnstaple, England.

It further states, “British compassion for those who are suffering has been replaced by a punitive, mean-spirited, and often callous approach, apparently designed to instill discipline where it is least useful, to impose a rigid order on the lives of those least capable of coping with today’s world, and elevating the goal of enforcing blind compliance, over a genuine concern to improve the well-being of those at the lowest levels of British society. . . . Various sources predict child poverty rates of as high as 40%,” and both students and teachers are forced to rely on food donations. The unemployed and the sick are forced to work under threat of sanctions. In Germany, on the other hand, “only” every sixth child is at risk of poverty, but more and more pensioners are poverty-stricken.

Anyone who wants to sell Britain or Germany as a model for success, in the face of these effects of EU policy, is either a charlatan or a hardened neo-liberal. Despite all the differences, the EU’s economic parameters are more in line with the final phase of the Comecon.

Not only is EU economic policy directed against the common good, but its foreign policy endangers the security interests of European nations. When Macron demands that the integration of the EU be consolidated because there are supposedly “too many powers that want to slow us down” and “attack our open democracies,” he is creating an enemy image to justify the geopolitical doctrine of the European Union’s “empire.” In reality, Europe needs dialogue and cooperation with Russia, and it is in the essential self-interest of European nations to cooperate with China’s New Silk Road on the basis of mutual advantage. As for the supposed threat to Europe from President Trump, remember the German proverb: “What one shouts into the forest is what echoes back!” Simply recall the immediate fundamental opposition of the European establishment to Trump’s election victory in November 2016.

It should be food for thought that the EU member states that have been attacked by the EU Commission and the mainstream media, including Italy, Greece, Hungary and others, have all opposed the sanctions against Russia and supported cooperation with China’s Silk Road Initiative—and also feel no fear of contact with Trump. In fact, unprejudiced contemporaries (are there any left?) would do well to re-analyze and reassess the three supposedly threatening “powers” named by Macron: “China, Russia and even the United States of America.” It is interesting in this context that recent articles in the New York Times of November 18 and in Le Monde, feature a more realistic re-evaluation of China, in stark contrast to the hysterical anti-China campaigns of the Western think tanks.

One of the five articles in the New York Times by author Philip Pan, titled “The Land that Failed to Fail,” describes the disappointment in the “West” over the fact that, despite its economic opening-up, China has neither adopted the “Western” democratic model nor collapsed under its “authoritarian rule.”

Instead, China has a track record of forty years of uninterrupted economic growth. It has the world’s largest number of homeowners, largest number of Internet users, and largest number of university graduates—and a rate of extreme poverty which has fallen below one percent. In another article titled, “The American Dream Lives—In China,” the authors asks the reader, in which country would an 18-year-old who grew up in poverty, have a better chance for a bright future? In the past, the answer would have been America. But today, China’s future prospects far outstrip those in the U.S. While China is still poorer than the U.S. over all, it has taken the most impressive leadership in the most valuable economic indicator: optimism.

China has freed 800 million people from poverty over the past 40 years, created a wealthy middle class of 300 million, and has the goal of eliminating poverty completely by 2020. This is the basis for the attractiveness of the Chinese economic model, in which the nations of Africa, Asia and Latin America see an unprecedented opportunity to overcome their own lack of development. 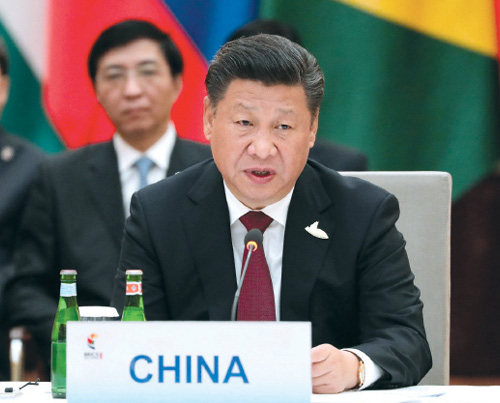 kremlin.ru
China’s President Xi Jinping speaks to the Heads of State and Government of the BRICS countries ahead of the G-20 Summit in Hamburg, Germany, July 7, 2017.

President Xi Jinping delivered the opening speech at the APEC CEO Summit in Papua, New Guinea, last week, where he asked the crucial question that concerns us all: “Humanity is once again at a crossroads. Which direction should we choose? Cooperation or confrontation? Openness or closing one’s door? Win-win progress or a zero-sum game? The interests of all states and even the future of all humanity depend on the choices we make.”

The EU has long had imperial fantasies, as the former advisor to Lady Ashton and Tony Blair, Robert Cooper, openly wrote, saying he would have liked to see the eastern expansion of the EU (and NATO) never reach a limit. Today, now that the neo-liberal model has clearly failed, if we permit them to follow the path of confrontation, this can only lead to disaster

Putting conceit aside, we should explore the reasons that the Chinese model is so much more successful, and then we will find, among other things, that China is much closer to Friedrich List and the historic “American model” than to Brussels. We must abolish the casino economy, introduce the Glass-Steagall banking separation system, and return to a credit system like the Kreditanstalt für Wiederaufbau [Reconstruction Finance Corporation, similar to the U.S. agency of the same name] at the time of the German economic miracle after World War II. Then, cooperate with China, Russia and other countries on the New Silk Road projects worldwide.