This article appears in the December 14, 2018 issue of Executive Intelligence Review. 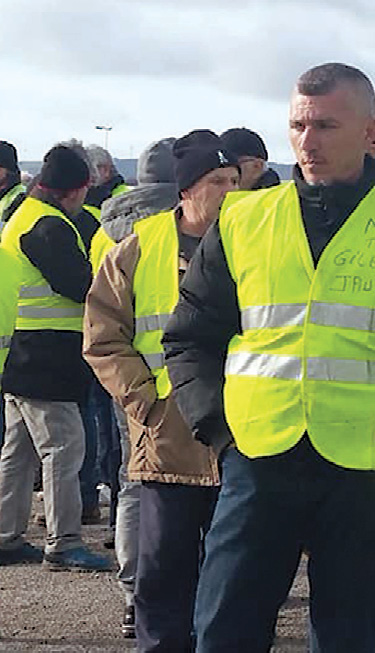 Dec. 8—There is a revolt against Macron in France; Brexit chaos in Britain; and in Germany, the probable continuation of the same policies which have resulted in the decline of the popular parties—the Social Democrats (SPD); the Christian Democracy (CDU); and the CDU’s sister party in Bavaria, the Christian Social Union (CSU). In these three largest countries of the EU, the chickens are coming home to roost after years of neoliberal politics. The EU as an “empire,” as French Economy and Finance minister Bruno Le Maire advocates, is going the way of all empires: They disintegrate in the medium-term because of the conflict of interests between the claims to privilege by the ruling elite, on the one hand, and the common good of the population on the other—and because of overextension.

In France, with the protest of the “yellow vests,” as they are called, the long pent-up anger of the population has raged for three weeks against the policies of the last decades (in favor of the rich, the banks and the speculators.) For years, the French state encouraged Frenchmen to buy diesel-powered cars, so that by 2016, 62% of all cars and 95% of all delivery vans and light trucks used diesel as fuel. When Macron announced an increase in carbon and air pollution taxes, inclusively to motivate citizens to switch back away from diesel-powered cars, they saw this as a total betrayal by the politicians. Raising fuel prices to motivate new-car purchases, even when drivers can afford neither gasoline nor diesel—that was the last straw.

The protest spread quickly, as farmers, truckers, fishermen, mayors, and students of all ages responded to the consequences of the upward-redistribution policy that has been the common denominator of every French government of the last 40 years. Macron’s capitulation—his withdrawal of the taxes—came too late; the genie of principled resistance to a system that was considered deeply unfair, had long been out of the bottle. Violent provocateurs mingled with the demonstrators, but this did not really affect the character of the movement. Faced with planned nationwide protests on December 8, the state mobilized 89,000 law enforcement agents. The government spokesman, Benjamin Griveaux, warned that provocateurs wanted to overthrow the government, while other sources spoke of plans to storm the Elysee Palace—but in their demand for the resignation of Macron, the various groups were all in agreement. In view of the fact that the police union has declared its solidarity with the “yellow vests,” and that of course soldiers have families whose living conditions have also been hit, the proclamation of a state of emergency by the government is a two-edged sword.

The protest movement, which incidentally came about largely independent of all political parties, underwent a qualitative transformation within just a few weeks; what began as rage over tax increases, immediately turned into a process of discussion throughout a broad spectrum of the population about the nature and purpose of society, and the injustice of a government that deprives people of their minimum requirements for survival. Whether this mass-strike process will end in a Jacobin Revolution, or whether a new political class will emerge from this ferment that can achieve a victory for the common good—this will depend essentially on whether or not genuine leaders can emerge, who credibly represent the new paradigm. 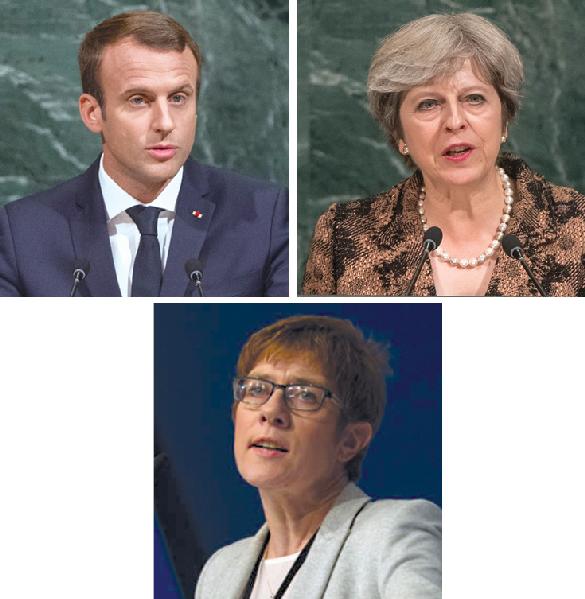 In the United Kingdom, the destabilization of the government has taken a different form, but could lead to no less dramatic consequences in the event of a disorderly Brexit. Prime Minister Theresa May already lost a vote in parliament, when she tried to keep secret her government’s legal advice which she had received on the Brexit agreement she negotiated with Brussels. Twenty-six MPs from her own Tory party, and nine out of the ten members of her coalition partner, the Democratic Unionist Party of Northern Ireland, voted against her, and Mrs. May and her Cabinet were accused of disrespecting Parliament. If, when it comes to a vote on Dec. 11, MPs do not accept her agreement, or change the text so that it is no longer acceptable to the EU, a chaotic Brexit would be the likely consequence. [Editor’s note, Dec. 11: Amidst deeper chaos, May yesterday postponed this vote sine die, that is, without naming a future date, to try to renegotiate part of her agreement with the EU, acknowledging that she would lose the vote were it held on December 11.]

For derivatives trading through the City of London financial center, such a development threatens to become another “last straw”—that is, the occasion for a new financial crash. But in every other respect too, an uncontrolled Brexit would be uncharted territory. However, the other option of simply dropping Brexit, which is open to May as well, could cause an enormous political explosion, because the causes that led the British people to vote for Brexit in the June, 2016 referendum are still operative. Either way, May’s future prospects are bleak. However, if there are new elections, there is an alternative in the leader of the Labour Party, Jeremy Corbyn, who has a program for the re-industrialization of Great Britain.

But even in Germany, the EU’s largest member country and its economic heavyweight, the shifts in the political spectrum to the detriment of the two former major parties, are an indicator of the underlying instability. With the election of Annegret Kramp-Karrenbauer as the new party leader of the CDU, a short-term respite may have been gained for the Merkel government, but nothing more. “AKK’s” lead of 52% to 48% in her run-off against Friedrich Merz was quite close, and thus the influence of the wing within the CDU which pays tribute to the neoliberal and neoconservative policies remains quite strong. More than a few of these CDU members would rather have a new Chancellor by the time of the upcoming election campaign for the European Parliament. And since AKK herself is regarded as a hardliner, both with respect to European policy and in her attitude towards Russia, the likelihood seems rather remote that she will replace the neoliberal paradigm that led to the losses of the major parties, with something new, such as the “New Silk Road” cooperative paradigm.

The common denominator among the governments of France, Britain and Germany, is their lack of insight into the reasons for the political changes of the past two years. These began with the Brexit vote in the UK, followed by the electoral defeat of Hillary Clinton, that in turn was followed by the election of the current government of Italy, and then by the cascading protest movement of the yellow vests in France. All these phenomena, to which we should add similar incipient tendencies in Belgium, Rumania, Bulgaria, Serbia, and other countries, all have something in common: The people of these countries can no longer tolerate the unfairness of the policies of the neoliberal establishment. The representatives of that establishment also share a common trait, which is that they cling to the hysterical conviction that they themselves are the best, the brightest, and the most wonderful—that they are people who could never lose elections, so that consequently only Putin could be responsible for their defeats. Whether they can truly believe this in their innermost selves, or whether, on the other hand, group-think has replaced their own thinking to such an extent that they seem to believe their own narrative, is still an open question.

In any case, six months before the European elections, the European Commission is expanding the taskforce that has existed since 2015 to combat alleged Russian disinformation, by more than doubling its annual budget to five million euros from 2019 onwards. In coordination with social networks such as Google, Facebook, Twitter, etc., which in turn are part of the “Deep State” surveillance apparatus in the U.S., this taskforce is supposed to promote the exchange of information about “Russian Fake News” and interference in election campaigns. And, who would have guessed: The first accusations have already appeared, that, of course, Russia is behind the yellow-vest movement!

Fortunately, more and more European governments are focusing on cooperation with Russia, China, and Donald Trump, beset though he be by the Deep State. According to Forbes magazine, Michele Geraci, the State Secretary in the Ministry of Economic Development in Rome, who has just returned from a successful trip to Washington, said that Italy and China are in the process of promoting close economic relations, and that Rome welcomes Chinese investors to expand the Silk Road program into European countries by investing in highways, airlines and ports. Italian infrastructure has long been in crisis, he said, while China is presently pursuing a most ambitious economic plan, and has proven to be a highly-rated investor in more than 65 countries. In his view, many other EU members, who are trying to stop Chinese investment, have cut themselves off from the potential of working with China.

It should be thought-provoking that Italy—whose new government is the result of the voters’ opposition to the austerity dictates of EU headquarters in Brussels, and to its geopolitical confrontation with Russia, China and the Trump administration—is in the ascendancy, and is quite stable when compared to France, Great Britain, and Germany. The same applies to Portugal, which has just become the first European country to have signed a formal cooperation agreement with China for the development of the New Silk Road, and a total of 17 other specific agreements.

There is indeed a way out of the manifold crises in Europe: The once-again sovereign nations of Europe must work together, as an alliance of the fatherlands (as de Gaulle had wanted), and cooperate with China, Russia and Trump’s America for an expansion of the New Silk Road on the basis of mutual advantage. Instead of militarizing the external borders of the EU, under the illusion that a new Limes [the line of defensive fortifications built by the Roman Empire to defend its southern flank in Africa] could seal off the European oasis, we need instead to create an entire new system of international relations, wherein we would cooperate as equals and on a “win-win” basis with the nations of Africa, Asia, and Latin America, overcoming their underdevelopment and poverty through the development of the New Silk Road into the World Land Bridge. Only in helping others will we save ourselves.