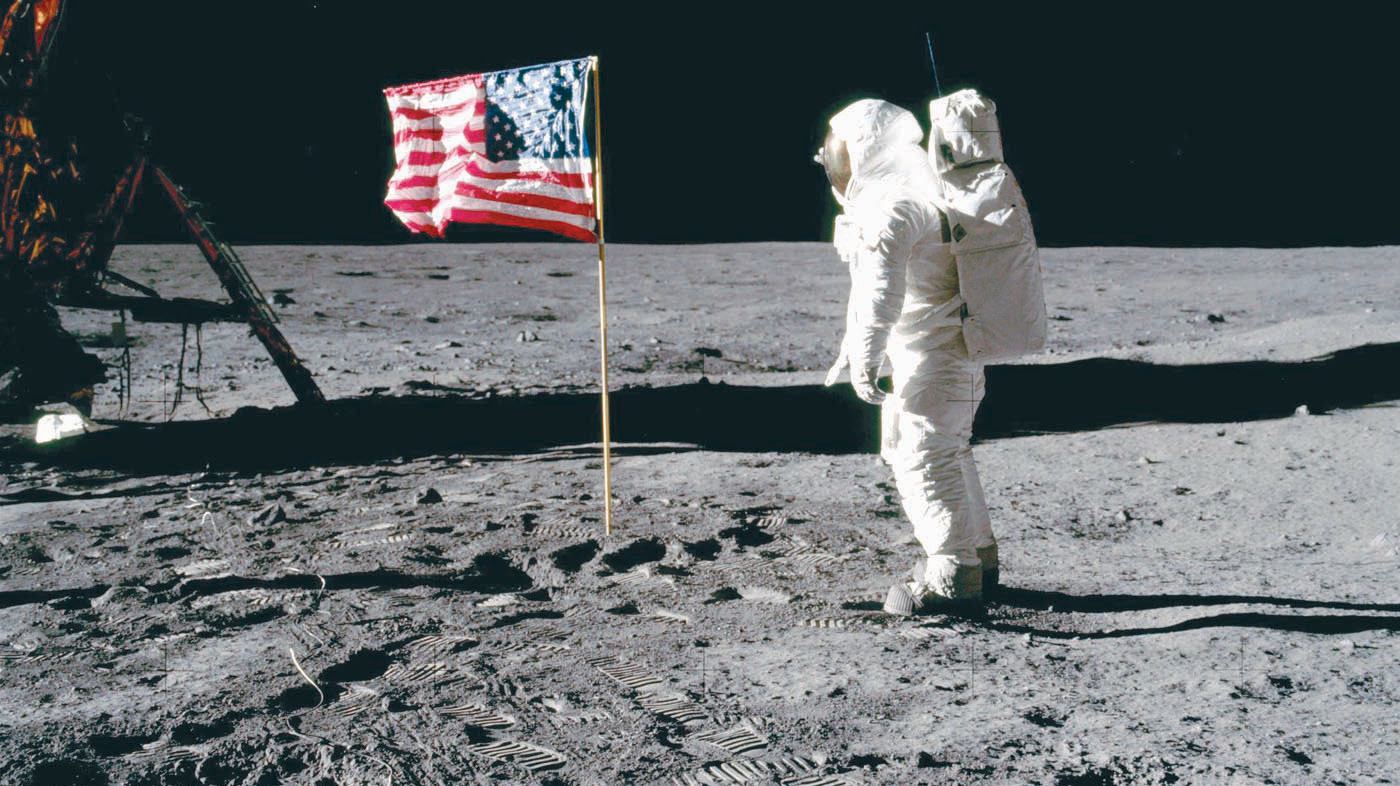 This is an edited translation from the original German, of the presentation that opened the Fusion Energy Foundation conference in Munich, Germany, reported in this issue of EIR.

July 13—There is hardly any other phenomenon of human existence that exemplifies man’s unlimited ability to overcome previous limits by qualitative insights into the laws of the universe, in the way that space travel does. The 50th anniversary of the Apollo Moon Landing on July 20, is therefore the occasion to commemorate all of the great space pioneers, while renewing the optimistic vision of the future of humanity, and our ability to create new civilizations outside the Earth.

Just in time for this commemoration, which is being celebrated worldwide with countless events, China’s National Space Administration reports that its Moon Landing Probe Chang’e-4 and moon rover Yutu-2 are continuing to provide exciting information from the far side of the Moon. India launches its Chandrayaan-2 spacecraft on July 15,[fn_1] which is scheduled to make a historic landing in September near the south pole of the Moon, where ice—meaning water—is suspected to be located in the perpetually shadowed craters. 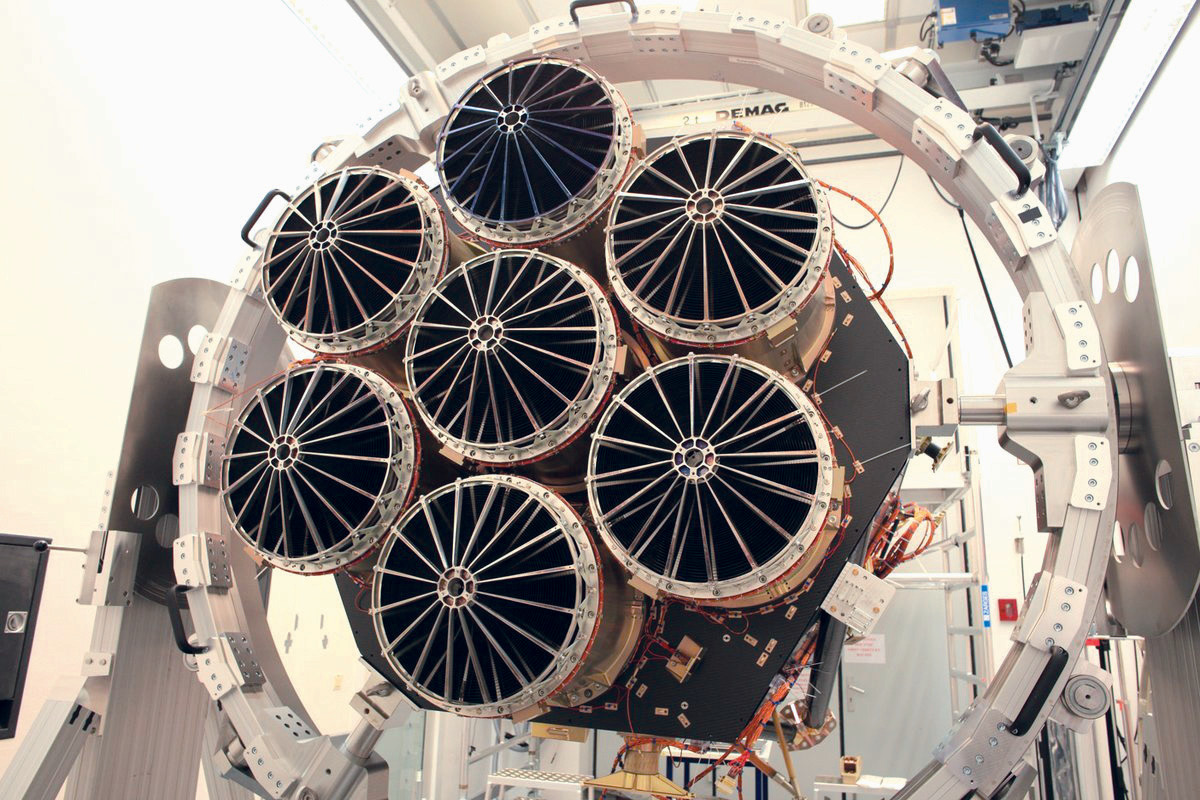 CC/JohannesBuchner
The eROSITA telescope, consisting of 7 identical mirror modules, will conduct the first complete sky survey in the medium X-ray range. It was launched July 13, 2019.

Ouyang Ziyuan, the “father” of China’s space program, recently reported at a press conference that China will launch a Mars mission in 2020 to investigate whether Mars is suitable for terraforming, the process of creating conditions on a planet that make possible a permanent habitat for human beings. And as part of the largest bilateral German-Russian space project, the SRG, launched today, the eROSITA X-ray telescope will explore galaxies billions of light-years distant in unprecedented resolution.

The fantastic thing about these reports is that they provide evidence that human creativity is always able to open up new horizons; as Russian scientist Vladimir Vernadsky recognized, man’s immaterial ideas represent a geological force in the universe, and as Nicholas of Cusa recognized, there exists a correspondence between the laws of the macrocosm and those of the microcosm.

Above all, the importance of space travel and exploration is that it clearly demonstrates that the Earth is not a closed system, and that therefore the entire thesis of the finiteness of resources and the consequent necessity of zero growth or even negative growth, is completely absurd. The Hubble Space Telescope has so far discovered that there are at least two trillion galaxies, that there are more stars in space than grains of sand on Earth, and all of these celestial bodies are full of resources—those we already know, like the helium-3 on the Moon (which will supply the fuel for the second generation of fusion reactors), and those resources for which we do not even have a scientific conception today.

If we are to secure our long-term survival as a species, then the future lies in international cooperation in exploring many fundamental challenges to human knowledge: the study of space and so-called “deep space,” the origin and history of the Universe, the nature of life itself, and the essence of human creativity.

If we combine our efforts internationally to answer these questions, then we have every reason to be optimistic about the future.

I would like to quote here two space visionaries: First, from the article “The Science and Technology Needed to Colonize Mars,” written in 1986[fn_2] by my recently deceased husband, Lyndon LaRouche:

What is the desire of the good person? What else but to discover the laws of creation less imperfectly, to the end that our knowledge, as guide to our practice, deviates less from that will of the Creator expressed in the lawful ordering of this universe. Who can be good, who does not yearn for agreement with the Creator, and, on that account, to lessen the imperfection of one’s own understanding of the lawful ordering of creation?

What could be a more beautiful event in the existence of mortal mankind than to step up from the mud of our planet, into space, to accept whatever challenge we discover to be awaiting us there? To think of such a task as imminently before us, is to experience an awesome sense of beauty within us.

On this planet, especially during the recent 20 years, increasing portions of the populations of even Western Europe and the Americas are afflicted with cultural despair.

“There is no future,” say the doom-saying “ecologists.” Believing the “ecologist” propaganda, the young person seeks momentary escape in the here and now: Drug usage proliferates, destroying growing ratios of our youth, on this account. That same stink of irrationalism and cultural pessimism, which spawned the Nazi upsurge in Weimar Germany, spreads among our nations, spoiling the very will of our nations to survive.

We must turn the mind’s eye of the young upward, to the heavens, while we point: “There lies the future of mankind.”

In that respect, the conquest of space is a prize beyond price. 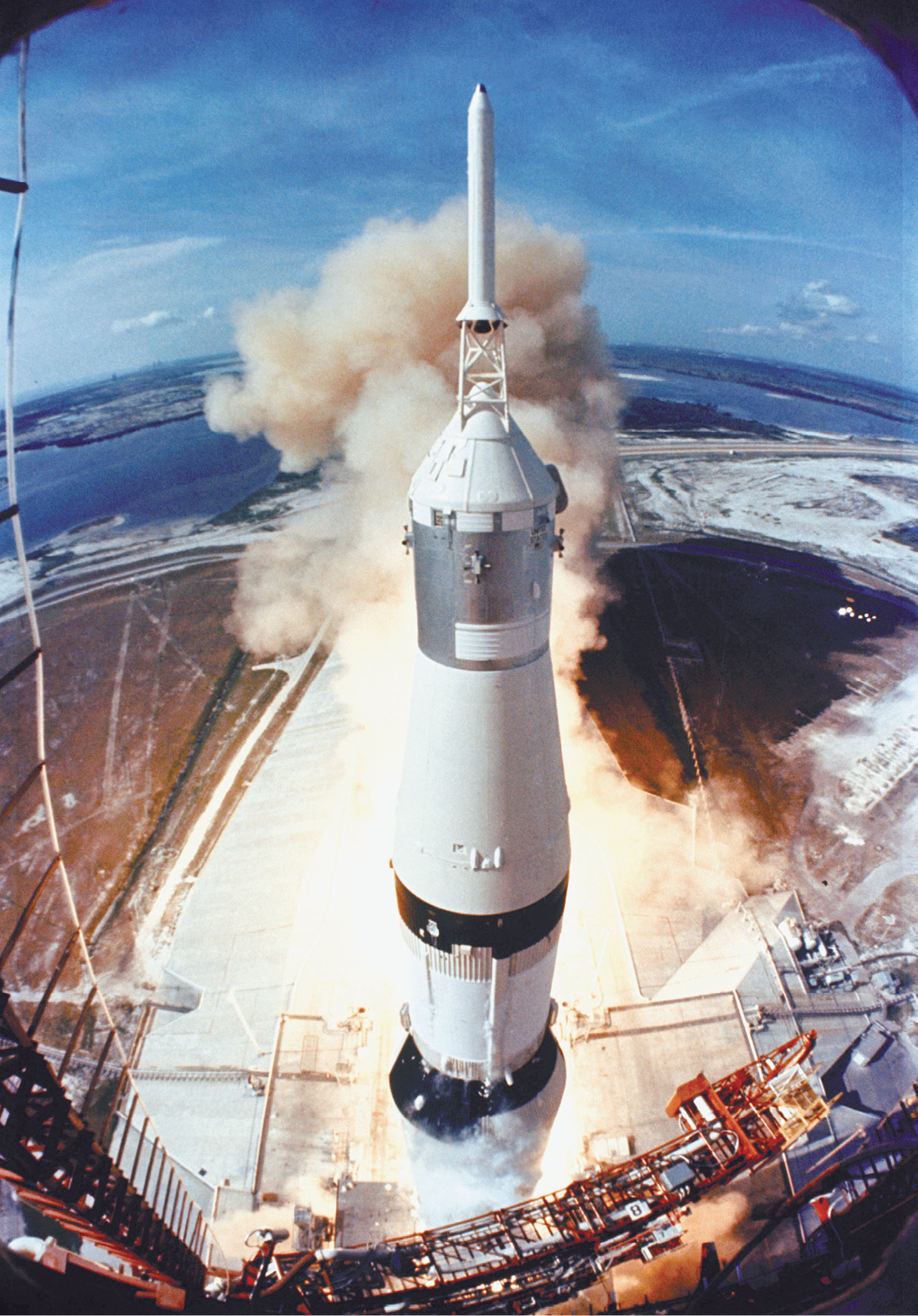 The Killing Fraud of the Green Movement

Twenty-three years after this characterization of the green movement, the manipulated irrationality and the cultural pessimism it has induced have become clinical. During the past year, the Intergovernmental Panel on Climate Change (IPCC), the representatives of the “Green New Deal,” and the whole phalanx of the end-times prophets of the “We Don’t Have Time” networks have said that humanity has only 12 years left to avert the climate catastrophe, and have thus created a phenomenon of organized hysteria among teenagers. However, Prince Charles goes even further. At a meeting with the Foreign Ministers of the Commonwealth, who are effectively the top diplomats of the British Empire, Charles reduced this period to just 18 months in which to bring Nature into balance and save humanity.

Do you still remember the dying forests? On February 14, 1983, Der Spiegel, in an article entitled “We Face an Ecological Hiroshima,” predicted the end of the forests, and all mainstream media massively ran with this campaign. Twenty-two years later, on May 18, 2005, the German public broadcasting network 3sat laid to rest the dying forest tale in its program “nano.” Suddenly, the line was that this thesis was based on “insufficient research” and on the “suppression of critical perspectives,” and that it had fomented a “general depressive mood.”

And what about the ozone hole? After an avalanche of ideologically tainted computer models had conjured up the coming end of the world, Nobel Prize winner Dr. Paul J. Crutzen, known as “Professor Ozone Hole,” recanted his ozone hole warnings in January 1997 as “too apocalyptic,” and today hardly anyone remembers the topic.

The danger does not lie in these alleged catastrophes, but rather in the ideology of the environmentalists and climate protectors, which is being promoted in ever-new versions by the financial oligarchy: On the one hand, to ensure huge profits for investors who invest in “sustainable financial products,” and on the other, to keep the population in a state of pessimism that makes them feel small, scared and powerless.

Behind this is nothing more than a veiled call to abandon the development of real scientific progress, to increase the wealth of a small class of speculators and investors, and to tell hundreds of millions of people that they are not entitled to food, clean water, healthcare, housing and education. These two completely opposite images of humanity—expressed in space travel and eco-hysteria—determine whether people are conscious of their creativity and are therefore free, or whether, reduced to fearful bundles of nerves, they accept the axioms of the neoliberal oligarchy. 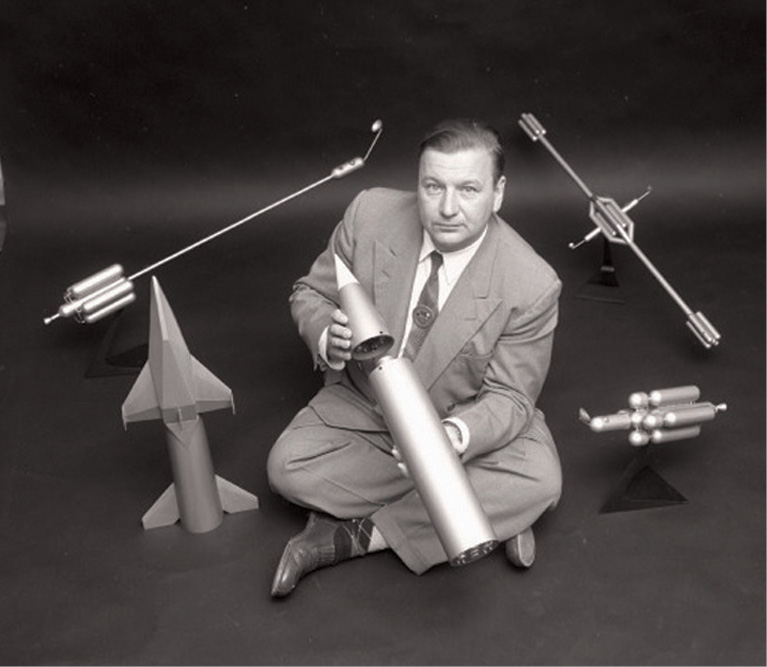 A Positive Trajectory, Based on Science

Global Times reported last year that China has found it necessary to correct its one-child policy. It was previously assumed, mistakenly, that resources were limited and that population control would help lessen the pressure on resources. Since then, the new focus is on innovation—and people, especially young people, are considered to be a source of creativity. Now it is assumed that more people create more opportunities and inspire irrepressible creativity. The groundbreaking success of the Chinese model speaks for itself.

Not only China, but all of Asia, and Russia as well, are on a very different trajectory from the neoliberal establishment in Europe or the United States. By contrast, the West is in the process of doing away with itself with the green ideology. As one can see in the condition of Europe, with its various protest movements, this policy not only destroys the foundations of the institutions underpinning the state, but it represents an existential threat. Ultimately, this self-induced decline of the West is the source of new conflicts and even the danger of a great war.

The ecology movement is not based on scientific facts, but rather has all the hallmarks of a fundamentalist religion, that rejects, in its fanaticism, the validity of reason. What we need in its stead is a movement to truly protect nature, a movement that develops so-called nature-like technologies that reproduce natural processes that occur in the universe, in accordance with the laws of nature.

The best examples of this are thermonuclear fusion and space travel. With nuclear fusion, we imitate the processes by which heat and light are produced in the Sun, and with space travel we are subject to the “extraterrestrial imperative,” as it was called by the great space pioneer Krafft Ehricke. That is to say, we are forced in space to respect the actual laws of nature if we are to survive there.

The anniversary of the Apollo Moon Landing should fill all of us with optimism for the perspective that Lyndon LaRouche developed in his book, Earth’s Next Fifty Years: that in Vernadsky’s sense, the world is increasingly characterized by the increase of the noösphere, that is, by the effect of human creativity.

The first of the three fundamental tenets of Krafft Ehricke is: “No one and nothing in the natural laws of the universe imposes any restrictions on man—except man himself.” It is up to us to shape a new phase in human history!

[fn_1]. For technical reasons, Chandrayaan-2’s launch was aborted one hour before final countdown. A new launch date has not yet been announced. [back to text for fn_1]