This transcript appears in the December 20, 2019 issue of Executive Intelligence Review. 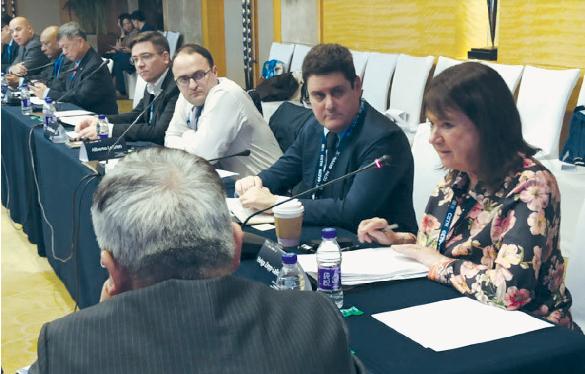 Schiller Institute
Helga Zepp-LaRouche at the founding of the CGTN Think Tank in Beijing, China on December 4, 2019.

Helga Zepp-LaRouche, founder and President of the Schiller Institute, was interviewed by Zhao Yang for China Plus, the official English website of China Radio International, on December 5. This is the edited transcript. Subheads have been added.

The interview was occasioned by Mrs. Zepp-LaRouche’s presence in Beijing to participate in the China Global Television Network’s Third Annual CGTN Global Media Summit on December 4, 2019, as a founding member of the network’s new CGTN Think Tank.

The think tank will function as a platform for exchanges and cooperation among global think tanks, with a goal of offering insights on world developments while promoting inter-cultural dialogue. Mrs. Zepp-LaRouche addressed one of the panels, where she focussed on the rapidly unravelling Western financial system and the urgency to adopt a new Bretton Woods agreement to establish a new system coherent with the spirit of the New Silk Road.

Former U.S. House Speaker Newt Gingrich said some of the greatest failures and weaknesses in the U.S. cannot be blamed on China. Gingrich made the comment in his new book, Trump vs. China: Facing America’s Great Threat. As one example, Gingrich wrote, “It is not China’s fault that old, bureaucratic, entrenched American telecommunications companies failed to develop a global strategy for 5G over the 11 years that the Chinese company Huawei has been working to become a world leader.” Overall, however, the book argues that China poses a real threat to the United States.

For more on this, I earlier had a talk with Helga Zepp-LaRouche, founder of the Schiller Institute, a political and economic think tank based in Germany.

Do you think he has a point when he says that some of America’s failures and weaknesses are not China’s fault?

Helga Zepp-LaRouche: I agree, one time, with Newt Gingrich—probably the first time, ever. But I think that the United States has simply not paid attention to it, and China has set its emphasis on innovation in many fields, so I think that his point is absolutely correct.

China Plus: And despite that particular comment—and the book is overwhelmingly about how China poses a threat to American values, and this seems to reflect a growing bipartisan conclusion among America’s political elite, that the U.S. needs to take a harder line against China—do you think U.S.-China relations are moving on a dangerous trajectory?

Zepp-LaRouche: Yes. But I think the bipartisan consensus only exists in the party leadership, the DNC [Democratic National Committee] and the Republican Party, but not for President Trump and not for the American people. I know that China is very disappointed about President Trump and the trade war, because in the beginning, he said he wanted to have a very good relationship with China, and he talks about his friendship with President Xi Jinping, but I think it has a lot to do with the pressure on Trump, who is confronted with, actually, a regime-change effort by the Democrats. The Attorney General, [William] Barr, has even talked about a seditious attempt to overthrow the U.S. government being behind the impeachment.

So a lot of things that Trump is saying, do not, in my view, really reflect his intention, because he has, in his rallies all the time, told his supporters that China is a great country, that it has a great culture. And I think if there is a defeat of this present coup attempt, I see the chances as actually quite good that the pendulum can swing back, because the people of America don’t hate the Chinese people, and President Trump wants to have a good relationship with Russia and China, but it is the neo-cons in both parties, who are trying to prevent that.

China Plus: But we see that the U.S. has been increasing pressure on China, on a number of fronts, like a trade war, the tech embargo, and the legislation on Hong Kong and on Xinjiang. How do you think China could respond to those matters?

Zepp-LaRouche: On the one side, it’s the United States, but in the case of Hong Kong, you see very clearly the role of the British. I think there were some articles in the Chinese media that correctly traced this policy back to the British role in the Opium Wars. And it is actually the forces of the British Empire, and their associates in the United States, who want to suppress the rise of China by focussing on making a “color revolution” in Hong Kong, which is heavily financed by forces abroad: The National Endowment for Democracy, for example, has been bragging that it is spending millions of dollars on financing the so-called “democracy” movement in Hong Kong.

I think the same thing goes for Xinjiang, with the passing of the recent Act, when there was a move to force Trump to sign it, because of the overwhelming [majority for it] in the Congress, [it is being said that] there is no point in him vetoing it [because Congress would override his veto]. He’s in the middle of an election campaign, which makes it very difficult for him.

But I think what China should just do, is invite more diplomats, more journalists, to Xinjiang. We had two members of our organization [who traveled] to Xinjiang and they spent a week there. And they came back and completely confirmed what China is saying, namely, that this is the way to fight against terrorism through economic development. Xinjiang used to be one of the poorest areas of China, which made it easy for the terrorists to recruit.

Now people have a good economic future. So, I think it’s absolutely on the right path. And for the last three years there has been no terrorism. I think China should just invite more people—diplomats, journalists—and also, be very self-assured. Because I think if you contrast what China is doing in Xinjiang with the absolute catastrophe that was caused by so-called “humanitarian” interventionist wars in Iraq, in Syria, in Libya, in Afghanistan, I think China actually looks like a shining model of good human rights, as compared to what happened in these places.

China Plus: OK, but when we talk about competition between the U.S. and China—they’re the largest economy and the second largest—do you think there is really such a thing as a “Thucydides Trap”?

Zepp-LaRouche: I think if one looks at the substance of the matter, the Chinese model is an incredible example of poverty alleviation. I was in China in 1971, and I have seen with my own eyes the incredible transformation. I can see that the Chinese people for the most part are happy, they’re optimistic. If you compare that, for example, with the poverty in the European Union, or in the United States, where you have for the third year in a row a reduction in the life-expectancy, as a result of drugs and alcoholism and suicides; the infrastructure in the United States is in a terrible condition, so I think that anybody who is objective sees that the Chinese model is actually more successful, from the standpoint of the well-being of the people.

If you really look at it, what China is doing today is much more in line with the intention in the beginning of the American Revolution of the Founding Fathers, of Alexander Hamilton. The principles of the American Revolution were very similar to those of China today. It’s just that the present policy of the United States, at least for the administrations before Trump, were very much taken over by the neo-liberal model, which emphasizes the profit maximization of the speculators.

As a result, the gap between the rich and the poor has become wider throughout the entire trans-Atlantic world. But also, look at the present mass demonstrations—in Chile, in Pakistan, Iraq, Iran, the whole Arab world. Today we have a general strike in France; even the German farmers are having long tractor motorcade protests, because they feel their existence is threatened. You can actually see that the neo-liberal model is completely failing.

And the Chinese model is prospering, and that is why the Belt and Road Initiative has been so attractive to many countries in the world—because they see that their benefit is [an integral part] of working with China.

So, there is a certain challenge, but I think the Western elite would be wise to reflect on why the Chinese model is more successful, and why their model is not. But they’re not willing to do that.

The Future Determines the Present

China Plus: But amid this worsening relationship with the U.S., what do you think China should do to develop its ties with other major powers, like the European Union and Russia?

Zepp-LaRouche: I think we are at the end of an epoch. I think this entire period of history is coming to end, and China has been building a new paradigm, of new relations among nations. But I think it will be very important to include Russia, India, and European nations, but I don’t think that the world crisis can be solved without including the United States. I think the two most important economies are the U.S. and China, and I’m convinced that there is a way of finding common interests: For example, we have incredible needs for the industrialization of Africa. This is a gigantic challenge: There will be 2.5 billion people [in Africa] by 2050. If we really want to solve this challenge, without having the worst migration crisis ever, all the countries must work together to help to industrialize Africa.

Also the reconstruction of Southwest Asia requires the cooperation of all big neighbors, and hopefully including the United States. So, my organization, the Schiller Institute, is working very hard, to try and convince the Americans and the Europeans that it is in their best interest to work to realize a new paradigm of civilizational cooperation—what Xi Jinping calls the shared community for the future of mankind. I think that is a concept which is the first time, the idea of overcoming geopolitics, of defining a solution to the present problems from the standpoint of the future.

We should think of how mankind should look 100 years from now: We will have, hopefully, thermonuclear fusion power, which means you will have limitless energy and raw materials resources, so that a reason for war will no longer exist. We will hopefully have villages on the Moon; we will be looking forward to soon having towns and cities on Mars, and that kind of international space cooperation will be the model for the future cooperation of mankind.

So I think if we elevate our view to that level, we can solve the problems of the present. If we don’t do that, we may destroy each other as a civilization. So, since I’m an optimist, I think we can get the reasonable people in all countries to cooperate for this higher goal.