Only a Cultural Renaissance Can Overcome the Crisis of the ‘West’! 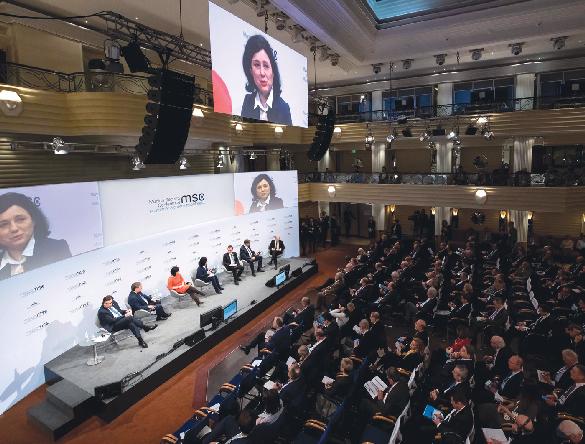 Feb. 22—The mass murder in Hanau caused horror not only in Germany, but all over the world. If such a barbaric, insane act is possible out of the blue, as the act of a lone perpetrator, one must also consider the possibility that it is somehow the result of an ideological delusion in which racism and apocalyptic ideas of alleged “overpopulation” both play a role, a delusion that has been shared by a number of such assassins—then a more in-depth analysis is urgently needed. What is going wrong in our society? Why does the overall structure of society seem to be gradually crumbling, as seen in the growing tensions between the west and east of Germany? Did the events surrounding the state election in Thuringia give only a first taste of something that could also happen elsewhere?

Change of scene. Just three days before the Hanau attack, the Munich Security Conference 2020 concluded, this time with the theme “Westlessness”—a new word that is supposed to express the crisis of the West—both the reduced position of the West in the world, and the decline in its internal cohesion. At the very beginning of the conference brochure, there is a quote from Oswald Spengler’s book The Decline of the West, in which he predicted the impending decline and eventual demise of Western civilization.

In the course of the three-day conference, the extremes of the current strategic spectrum unfolded: from the U.S. side, Secretary of State Mike Pompeo, Defense Secretary Mark Esper and Speaker of the House Nancy Pelosi were all on the same line that the West is winning, and that Russia and China are the problem. Diverse Europeans expressed concern in various ways that they were somehow being sandwiched between the United States and China, and therefore called for Europe to play a larger, independent role. These concerned Europeans ultimately remained vigorously inclined to “stay the course” with regard to neoliberal economic policies. The foreign ministers of China and Russia repeatedly referred to the offers of cooperation they had made, to which there had never been a response.

Pelosi emphatically demonstrated her neoconservative kinship with Pompeo regarding the demonization of China and Russia. But what took the cake, was Pompeo’s sidekick Esper, who accused China of long-term manipulation of the “rules-based order.”

Austerity to What End?

This accusation deserves a closer look.

It should be noted that despite the public relations use of the topic “Westlessness,” not a single representative of this West tried to look for the reasons for this relative loss of power in the policies of the West itself, i.e., to question the reasons for the global rebellion. This rebellion has continued to expand since Brexit, with Hillary Clinton’s election defeat, the yellow vest demonstrations and general strikes in France, the mass demonstrations from Chile to Lebanon and Algeria, and is directed against the neoliberal austerity policy that affects the population and only serves the profit of the financial sector.

The rise of the German political party, AfD (Alternative für Deutschland, Alternative for Germany), which started as an anti-euro party, is due to the same dynamic. And if Europe had not directly or implicitly supported the wars of intervention by the British and the Bush and Obama governments, and had instead turned away from its colonialist policy towards Africa and done what China has now started to do—namely, to develop the African continent by investing in infrastructure assistance—then there never would have been such an escalation of the refugee crisis, from which the AfD benefited in its second phase of gaining influence.

The monstrosity of racism in all its forms should not be excused or relativized in any way; it represents people at their worst. But you make it too easy for yourself if you pretend that all the “good guys” now have to stand together, and if the racists are excluded, then the problem will be solved. The question should be, “Where did these assassins get their end-times vision about an alleged overpopulation of the planet, as was expressed in the so-called manifestos of the assassins of Christchurch, El Paso, Halle, and now Hanau?” Once the notion that we have “only twelve years left”—or that the finite resources of the Earth are not enough for everyone—began to be propagated in the mass media and in the public debate, the aphorism that the sleep of reason that produces monsters, becomes real.

As a consequence, the radical policies of Mark Carney and Mike Bloomberg, the “green financing” sought by the central banks and the EU, and the “circular economy,” are no less racist, because they lower the energy-flux density used in production to such a point that billions of people will no longer be able to survive. And the fact that most of these people who live in developing countries are people of color, has certainly not escaped the attention of the supporters of “green financing.”

The blaming of China for the world’s problems—the China that has just demonstrated in its response to the Corona virus that it was prepared to accept significant losses in its own economy in order to protect people’s lives and curb the international spread of the virus—is immoral and mendacious.

Breaking the Rules in a Rules-Based Order

Let’s see how the West, which has puffed itself up so, actually keeps up with the rules of its “rule-based order.”

• Election according to the rules of electoral laws, admittedly with tricks by the AfD in the third ballot for the Prime Minister in the state of Thuringia? Suddenly “breaking a taboo” is more important than the electoral law system. Is that mentioned in the right to vote? Chancellor Angela Merkel made a short call from South Africa to say that the election result had to be reversed. Then we keep voting until we get the desired result.

• Do people still have the responsibility, established with the Nuremberg trials at the latest, to make public information about the most serious crimes committed by state officials, in order to protect human lives? Not so if your name is Julian Assange. All of Europe is watching as Sweden, Great Britain, and the USA attempt to make an example of Assange. It does not count that the UN special rapporteur on torture, Nils Melzer, sees the “credibility of the rule of law badly tarnished.” After all, rules are there to be adapted.

• The murder of an Iranian military leader in a third country using drones? The Bundestag’s (German Parliament) scientific service sees this as a “violation of the right to life” within the meaning of Article 6 of the UN Civil Pact. No reason for the federal government to take a position. International law is simply given a short vacation, the “rules-based order” can tolerate this much.

• The opposition leader in Venezuela, Juan Guaido, declares himself President instead of the legitimately elected Nicolas Maduro? Naturally the EU supports this; after all, this new guy belongs to the neoliberal camp. Rules-based can also mean that these rules are only used selectively.

• The Hong Kong-based opposition, generously funded by the UK and the U.S. National Endowment for Democracy (NED), uses terrorist methods against local institutions for weeks on end? But of course, they’re not terrorists, they are freedom fighters!

• The EU border control agency Frontex is cooperating with the brutal action taken by Hungarian border officials against refugees, including children, using tear gas and pepper spray, which among other things was criticized by Frontex Commissioner Inmaculada Arnaez and the UN Commissioner for Human Rights, Michelle Bachelet. The German public television investigative program, Munich Report, regards Frontex itself as being involved in fundamental rights violations in many of its operations. Oh, but the Mediterranean is an extralegal zone, and, of course, rules don’t apply there.

• Rules in the U.S. Presidential Election? Election meetings, primaries, equal opportunities for all candidates? For the late starter and multi-billionaire Michael Bloomberg, the Democratic National Committee (DNC) simply changes the rules and the White House is for sale to the highest bidder.

What does all this have to do with the mass murder in Hanau? Nothing directly, of course; quite a lot indirectly. If the behavior of the so-called leadership elites over a long period of time gives rise to the feeling that there is justice only for the rich, that in the end there is no authority for citizens to turn to if their own existential interests are threatened, then social cohesion gradually erodes. Then that dangerous mixture of basic opposition, vigilante justice, and dissolution of boundaries emerges, which creates the breeding ground for all possible evils.

The theme of the Munich Security Conference reveals a certain, albeit late, insight that the West is not doing well. A positive solution was not even offered there. 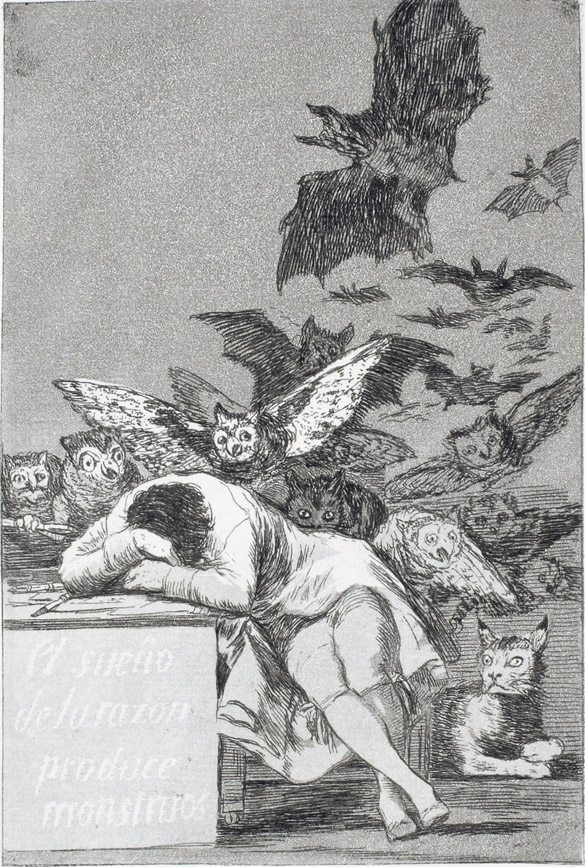 The Sleep of Reason Produces Monsters, by Francisco Goya.

Europe’s leading nations have the potential to overcome the current crisis. We have produced some of the greatest achievements in universal history over the past two and a half thousand years of our history. The ideal of Greek classicism about the inner cohesion of the good, the beautiful and the true; the humanistic image of man in the Italian Renaissance; the irrefutable proof of the creative potential of human reason, demonstrated in the discoveries and inventions of Leonardo da Vinci, Johannes Kepler, and Albert Einstein; the universal view of Gottfried Wilhelm Leibniz, for whom there was clearly only one human race; the wonderful image of man that is expressed in German classical poetry and music—all these and many more treasures are available to us, if we want to renew our society.

Admittedly, it is not easy to see where such a renaissance is supposed to come from. It would have to start with those who profess this humanistic tradition acting to reject the cult of ugliness that we are expected to accept in theaters, opera houses and by the so-called entertainment industry in the media. Of course, racism in all its forms must be condemned and weeded out of society. But this will only work if people again set up the ideal for themselves, to wish to become a beautiful soul in Friedrich Schiller’s sense.