This editorial appears in the April 3, 2020 issue of Executive Intelligence Review.

Dialogue with Helga Zepp-LaRouche:
Apollo Mission to Save Mankind

On March 28, 2020 a Town Hall Meeting on the subject of “An Apollo Mission to Save Mankind—Building the Health Silk Road,” featuring Helga Zepp-LaRouche, was held over the Internet. Joining Mrs. LaRouche were speakers from New Jersey, Houston, Detroit and the San Francisco Bay Area, all of whom reported conditions in their locations. A video of the meeting can be found here.

Helga Zepp-LaRouche began her opening presentation by referencing the March 25 conference call of the leaders of the G20 nations and the subsequent private discussion between President Trump and President Xi of China. She cited the results of these calls as very positive initiatives in the face of the COVID-19 pandemic. In particular she named “four very constructive proposals” put forward by China’s President Xi Jinping, namely (1) that the G20 should jointly help countries which have weak public health systems, (2) the creation of a global network of control and treatment for the virus crisis, (3) supporting the WHO (World Health Organization) to keep treatment and protocols of that treatment enforced, and (4) the development of a macro-economic and policy coordination of all countries.

Later, in the private call with President Trump, Xi urged a stop to all confrontation worldwide. This latter proposal was reiterated by Russian President Vladimir Putin, who said this is a crisis where you cannot have every man for himself. He called for a special fund under the IMF which would give credits for this support of the health systems of all participating countries. He also proposed to establish so-called “green corridors,” which has not so much to do with ecology Green, rather the idea is to have open corridors without sanctions, without tariffs, to bring humanitarian help to all the countries that need it.

Mrs. LaRouche praised these developments. At the same time, she stressed that the only effective and permanent solution to this crisis is for nations to adopt “the full program envisioned by my late husband, Lyndon LaRouche: the Four Laws, a New Bretton Woods system, an immediate end to the casino economy, and a credit system that will finance a World Health Silk Road, meaning that every single country in the world must be supported to build up an adequate health system, no less than it used to be with the Hill-Burton standard in the United States.”

Speaking of the need for a Health Silk Road, she stated,

This is the strongest point I want to make. We must understand that we have to have a global health system, hospitals in every country. We have to have the same kind of treatment that fortunately is now starting to be implemented in hotspots in the United States such as New York and other areas. But you need that same approach in every country, otherwise it will come back. This is a virus that is a pandemic. It does not respect borders or the idea of each nation for itself.

Following Mrs. LaRouche’s presentation to the Internet Town Hall Meeting, there was extensive discussion. Dennis Speed (New York/New Jersey), Susan Kokinda (Detroit), Kesha Rogers (Houston) and Michael Steger (San Francisco Bay Area) all gave reports on current developments in their own locales, as well as insights into the background and the solution to the crisis.

In response to a question from Dennis Speed, Mrs. LaRouche described the twin oligarchical evils that have been unleashed on the world since 1971. On the one hand, since Richard Nixon’s abolition of the Bretton Woods System in August of that year, we have seen the near-global triumph of monetarist financial methods and unchecked financial speculation—all at the expense of needed investments in science, industry and the physical economy.

This same period also witnessed the beginnings of an oligarchical drive for a new cultural paradigm which sought to end scientific progress and impose Malthusianism. In that regard, Mrs. LaRouche mentioned her intervention against John D. Rockefeller III at the 1974 UN Population Conference in Bucharest, Romania, the issuance of NSSM [National Security Study Memorandum] 200 by Henry Kissinger, calling for world-wide population reduction, and the issuance by the oligarchical Club of Rome of its completely fraudulent book, Limits to Growth.

In response to a question from Michael Steger, Zepp-LaRouche stated that her husband had already forecast the type of crisis we are in today, when he established a Biological Holocaust Taskforce, which led to the publishing of six large reports in the 1970s, 1980s, and 1990s about the danger of pandemics and what must be done about it. She stated,

We are now paying the price for the world not having listened to his warnings. I don’t think that the world, after this crisis, will ever go back to the idea of only maximizing financial profit and sacrificing taxpayers’ money to bail out banks over and over again. I think that is already a question of the past. I think this system is finished; it will not come back....

Everything will now depend on the whole world not going under, with this collapsed monetary and financial system. This is why we need a mass mobilization of a lot of people, preferably also a lot of young people, taking to heart the immoral conditions of the world, who will start mobilizing to remedy it.... I think the system is gone; it cannot be revived.

The question now is, can we bring the solutions into the consciousness of enough people in time, so that we don’t end up in a huge Dark Age collapse and chaos? The mechanisms for the solutions exist. There now is a good connection between Trump and Xi Jinping—this is very important; I would say, this is the most important, actually. Putin is demanding a UN General Assembly initiative in the same direction.

Susan Kokinda provided a graphic picture of the decades-long destruction of the productive power of the city of Detroit and asked, “How can we revive and harness that machine-tool spirit?”

I think the crisis will lead to people saying we need to have production in our own country. The machine-tool principle means that you introduce the most modern, most innovative, scientific and technological results into agricultural and industrial production ... And that will mean that we will have to apply the principles of physical science to economics and to politics. And that is essentially the reform that will be absolutely necessary. People will start to like to learn again, to like to study again. 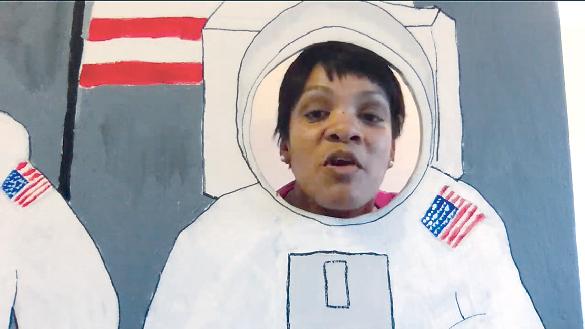 The remarks of Kesha Rogers continued on this subject. She provided a sweeping overview of the advances in space technologies and asked Helga to “address the future of mankind from the standpoint of these advancements in technologies that LaRouche forecast, and why it is that we can leap forward into that beautiful future.”

I think the concentration on space travel and space research is what can spark the optimism of people. It makes clear that we’re not living in a closed system. The entire green ecology movement, the Malthusian movement, all based on the axioms that the Earth is finite ...

We have to make new discoveries, discoveries of physical principles, to better find out how our universe actually works.

And that instills optimism in people: Remember, it’s been less than year since we had the 50th anniversary of the Apollo manned landing on the Moon, and just think! What absolute joy existed around the globe, how optimistic people were, and that was thoroughly justified. I find it quite interesting that some Chinese scientists said that they will try to stick to their next lunar missions, despite the coronavirus crisis. I think this is extremely important....

We should not go back to the old paradigm in this crisis, but we should do exactly the opposite: We should focus on the next steps of the infrastructural development of our planet, so that soon we will have fully developed every continent. And then the next phase of infrastructure development will be putting villages on the Moon as a necessary step toward building a city on Mars.

There were many other questions, including from audience members, and as this remarkable dialogue proceeded, many different aspects of the crisis and the challenge before us were addressed.

Mrs. LaRouche’s message is summed up in a comment she made near the close of the meeting:

Values will have to change. This crisis has one hopeful benefit. It will force people to think about what is important in life, what are the things that last. What is it that you leave behind as a result of your life once you are no longer here? Have you contributed something to the universal development to mankind? And if you had a majority of people thinking that way, no empire could exist, because empire depends on people not thinking. So the best antidote is to become a thinking human being and generate that quality among as many of your colleagues and friends as you can. And hopefully, we can come out as a true republic, and true republics in many parts of the world, and empires will be buried with the remnants of this crisis.