The following statement was issued on June 24 by Helga Zepp-LaRouche, founder of the Schiller Institute.

Vladimir Putin’s detailed and very straightforward article on the background to the Second World War, which he substantiates with important historical documents, and his speech to the June 24 military parade in Red Square to commemorate the 75th anniversary of the Soviet victory over fascism, are urgent must-reads for every politician and politically aware person around the world. At the same time, one should definitely watch the entire military parade, but keep in mind that the overwhelming majority of the Russian population had already read Putin’s article as they followed the parade on television.

What comes across is an approach to understanding why May 9 is the most important holiday in Russia, and that the same almost superhuman determination that enabled the Soviet population to survive the barbaric attack by the Wehrmacht and to achieve victory over Nazi Germany despite the loss of 27 million people, still exists in Russia today. But Putin also extends an olive branch to the West by calling on all countries to publish the still secret historical documents from before and during the Second World War, and to use them together with the testimonies of contemporary witnesses to launch a truth-seeking debate among historians. Reflecting on why World War II came about should cause political forces in the world today to draw the necessary lessons and rudely awaken the world to the escalating war danger so as to avoid repeating the same mistakes.

Given the gigantic destructive power of the two world wars of the 20th century and the almost certainty that mankind would not survive a third world war, this time thermonuclear, it is useful to realize the point at which these world wars could no longer have been prevented. Putin answers this question very clearly regarding World War II by saying that it was the “Munich Betrayal” as the Russians truthfully call it—called the “Munich Pact” in the West—that triggered the war. Putin’s article also responds to various historical misrepresentations, such as the European Parliament’s declaration of September 19, 2019, which gave equal blame to the Nazis and the Soviet Union for the Second World War, or numerous accounts that mention all the participants in the anti-Hitler coalition with the exception of the Soviet Union, or the claim that it was primarily the United States and Britain that defeated the Nazi war machine. There is no longer any public awareness in the West of the fact that the Soviet Union, in reaction to the blitzkrieg attack carried out with never before seen destructive power by the Nazis on June 22, 1941, carried out an unprecedented evacuation of people and production facilities to the east. Within a year and a half, the Soviet Union had surpassed the military production of Germany and its allies.

As quoted in the 1945 report by the International Reparations Commission headed by the Russian diplomat, Ivan Maisky, the number of soldiers deployed by Germany on the Soviet front was at least ten times greater than on all other allied fronts, four fifths of the German tanks were deployed there, and about two thirds of the German aircraft; in total the Soviet Union accounted for about 75% of all military operations. Roosevelt’s Fireside Chat presentation to the American people on April 28, 1942 is quoted: “These Russian forces have destroyed and are destroying more armed power of our enemies—troops, planes, tanks and guns—than all the other United Nations put together.”

Moreover, Churchill wrote in a letter to Stalin on September 27, 1944, that “it is the Russian army that tore the guts out of the German military machine.” Putin expresses gratitude for the efforts of all the countries and peoples who fought on different fronts and the eventual support of the Allies for the Red Army through the provision of ammunition, food and equipment, that accounted for seven percent of the total military production of the Soviet Union. It follows that one of the most important corrections to be made in the accounts of the Second World War is to emphasize, contrary to what is done today, the outstanding role of the Soviet Union in the victory over fascism.

Putin makes a clear distinction throughout between the German population and the National Socialists, who skillfully exploited the intention of the Western allies to rob Germany under the conditionalities of the Versailles Treaty and drove Germany into a new war. He notes that the Western states, especially political forces in the United Kingdom and the United States, directly or indirectly made this possible; certain financial and industrial circles invested very actively in German factories that were producing military products, and there were many supporters of extreme right-wing nationalist movements among the aristocracy of western nations and political establishments. 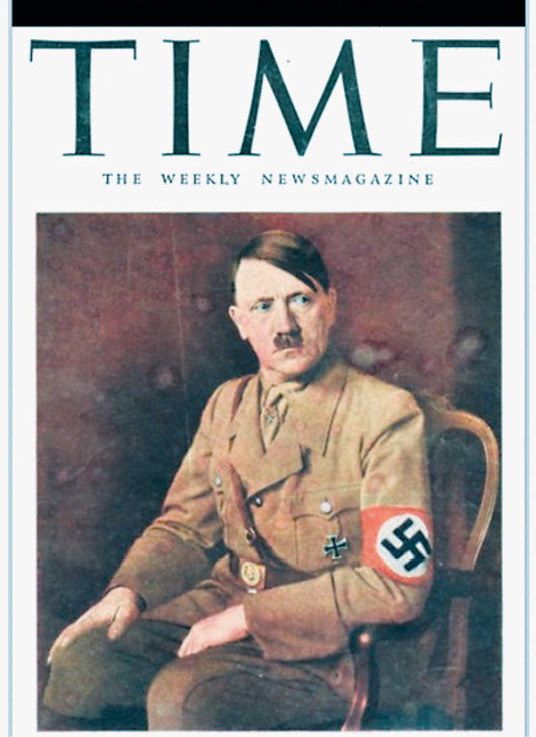 One could add to that, that Hitler was extremely “socially acceptable” in these same circles: The New York Times fully supported Hitler until 1938, and Time magazine declared him “Man of the Year” that same year. What Putin states only summarily here, has been documented in great detail by Lyndon LaRouche and authors associated with him—from the support for Hitler coming from Averell Harriman and Prescott Bush to that of Montagu Norman, head of the Bank of England, as well as the American eugenics movement’s open support for the Nazis’ racial teachings. Prescott S. Bush’s banking partner Fritz Thyssen, in his 1941 book I Paid Hitler, openly admitted that he was Hitler’s most generous supporter. Putin also mentions the deliberate setting of arbitrary borders under the Treaty of Versailles (one could add Sykes–Picot and Trianon), which were intended to be time bombs for geopolitical manipulation.

Putin hits a particularly sensitive point when he addresses the fact that politicians in the West do not like to be reminded of the Munich Pact, in which under the guise of an appeasement policy, the booty was divvied up. Czechoslovakia was betrayed by its allies France and Great Britain, and war between Germany and the Soviet Union was in principle pre-programmed. It was absolutely clear to the British and French geopoliticians that “Germany and the Soviet Union would inevitably clash and bleed each other white,” Putin writes.

Documents are also cited that show how the British and Polish sides tried to prevent the formation of an anti-Hitler coalition, and that the signing of the Non-Aggression Pact, which in fact made the Soviet Union the last country to sign any such treaty with Germany, took place against the backdrop of the real threat of war against the Soviet Union on two fronts, as Japan was already involved in fierce fighting on the Khalkhin Gol.

That France and Britain clung firmly to their plan to have Germany and the Soviet Union destroy each other, became even clearer when, after Hitler’s invasion, neither country came to Poland’s aid at all, moving militarily a few kilometers into German territory, to give the appearance of warlike activity, a farce called the “phony war” (Sitzkrieg in Germany and drôle de guerre in France). Putin quotes General Jodl during the Nuremberg Trials saying that Germany did not lose the war as early as 1939, only because the 110 or so French and British divisions, which were up against 23 German divisions in the West, remained completely idle during the war with Poland.

It will not please those in the West who have been writing a revisionist history of the Second World War, and its prelude, for some time now, but Putin has outlined in this article the essential process of these maneuvers that created the greatest catastrophe in history to date. He is now calling on all states, each of which is to blame in varying degrees because of their geopolitical interests, to cooperate in this historical reappraisal. Each believed they could outsmart the others, as Putin writes. But in the end, it was the short-sightedness of refusing to create a system of collective security, that sealed the road to the great war.

Putin’s call to create a comprehensive archive of the history of World War II, and the pre-war period, in which all film and photographic material, all documents already published and documents yet to be released, would be available to historians, must be realized without delay.

I have been deeply convinced for a long time that the German population, for example, will never gain internal freedom and their sovereignty until they understand that Hitler and the Nazis were not a purely German phenomenon, but a project that was supported for geopolitical reasons by British and American circles. For this reason, I had The Hitler Book published back in January 1984, which goes into some of the background that led to the Nazis, one among the many tendencies of the Conservative Revolution which was supported by the international oligarchy.

Such a public international debate is also urgent because thinking people can quickly recognize the parallels to politics today. The plan at that time, which was to let Germany and the Soviet Union bleed each other white, is now a plan to encircle Russia and China, and to bring about regime changes against the governments of both nations, and in the United States it is the ongoing “Maidan” against President Trump, who waged his 2016 presidential campaign with the pledge to establish a good relationship with Russia, and who was building, at the beginning of his Presidency, a good relationship with China.

President Putin ends his article with a reference to the summit of the five permanent members of the UN Security Council, which he has proposed, and which the other four heads of state have already agreed to. This summit, he says, should frankly discuss, among other things, issues of preserving peace and in particular, of overcoming the economic crisis which has been exacerbated by the coronavirus pandemic. How severe the impact of the pandemic will be, he points out, depends decisively on the ability of these countries to work together, as real partners, in an open and coordinated manner, and to revive those high humanist ideals and values for which their fathers and grandfathers fought shoulder to shoulder.

Such a summit must be supported by all peace-loving nations and people, because only the combination of the United States, Russia and China can implement the needed reorganization of the hopelessly bankrupt financial system through a new Bretton Woods credit system, and hopefully, the desolate state of the world will convince France and Great Britain that they have to give up their colonial and imperial traditions.

Vladimir Putin’s initiative to use the 75th anniversary of the end of the Great Patriotic War to launch an international discussion about the historical truth of the causes of World War II is a brilliant flank, which may possibly prevent the world from sleepwalking once again into a new world war.