This transcript appears in the October 23, 2020 issue of Executive Intelligence Review.

Stopping Hunger in Africa Is a Moral Test for Americans

This is the edited transcript of the Schiller Institute’s October 10, 2020 dialogue with Helga Zepp-LaRouche and Harley Schlanger. The video of that interview, is available. 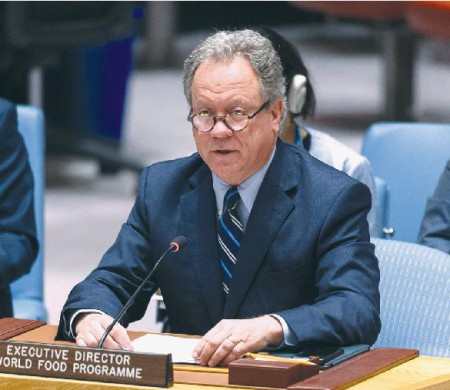 Harley Schlanger: Welcome to our weekly interview with Helga Zepp-LaRouche. It’s October 14th, 2020. We’re going to begin today by talking about something that does not receive a lot of coverage in the United States or internationally, and that’s the international food crisis.

Last week the Nobel Peace Prize was given to the World Food Programme; its Executive Director, David Beasley, said that this gives us an opportunity to bring this food crisis to people’s attention. But it’s not getting much attention, and Helga, this is a crisis that has already killed, according to Beasley, 7 million people from hunger this year. But another 30 million or more are threatened in the weeks ahead. Why don’t we pick up on this and talk about this emergency appeal?

Helga Zepp-LaRouche: I think this requires an urgent mobilization around the world, because as David Beasley said yesterday at a conference of the Food and Agriculture Organization (FAO) in Rome, this is the worst humanitarian crisis since the Second World War. And the situation is completely out of control. The worst-affected continent is Africa, but Ibero-America and some Asian countries are also affected.

This is a crisis that was clearly coming—it’s not a surprise. Mr. Beasley warned of it many months ago. As a matter of fact, I think the first warning he made was more than a year ago, and nothing was done. He said that the World Food Programme needed $6.8 billion to get the food to the places where it is needed, and his organization was only able to get $1.6 billion! Now, he made the point that in a world where you have more than 2,000 billionaires, who own more than $8 trillion in assets, it could be easily solved. If they would all put in a little share, it could be solved. They won’t do that. They wouldn’t be sitting on this kind of money if they were not enjoying the benefits of the system responsible for this crisis.

So, it does require an urgent mobilization. Beasley warned that if it is not reversed very quickly, it will lead to mass famine, “of biblical dimensions.” In earlier speeches he warned that it could soon be a situation where every single day 300,000 people are dying of hunger! Then, the second consequence he is warning of is a tremendous political destabilization, chaos—entire continents plunging into a completely uncontrollable situation. And then, third, a mass migration of the people trying to flee from hunger.

This is really a big crisis. Let me read you part of a letter from Ramasimong Phillip Tsokolibane, the leader of the LaRouche movement in South Africa, who has made an urgent appeal. He called it “A Matter of Life and Death.” In his appeal, he says that he’s not just speaking for himself, but he’s speaking as a spokesman for all of the people who soon face starvation and who cannot speak on their own behalf.

Right now, many millions of my fellow Africans are starving. They are starving thanks to a combination of deliberately enforced underdevelopment of my continent. …

He quotes these words from David Beasley, spoken on September 17:

And then he says:

I want to stress that this is not a matter of what will happen—it is already happening. And unless something is done and done soon, millions and millions of people will die in the immediate weeks and months ahead, as David Beasley warned. He had already addressed the UN Security Council in April, warning that 300,000 people could die every day.

I think you should look at his entire letter, which is posted on the Schiller Institute website, and really distribute it widely.

Tsokolibane then says that the problem is so big that it needs large food-producing nations to use the military to bring the food into the areas where it is needed, because it’s not just the big cities, but the rural areas, remote areas where not even infrastructure is developed and where the delivery will be extremely difficult. And then he appeals directly to President Trump to respond to that, reminding that this is a situation comparable to the U.S. helping Europe with an airlift program after the destruction of World War II. I think that’s exactly the right approach.

Now, obviously, this is not very likely to happen right now, because we are in the middle of the last weeks of the U.S. election campaign—people there are only looking at the election, for the most part.

But that is one of the reasons why we have been talking about the need to have a committee to address these crises. I call it the Committee for the Coincidence of Opposites, whereby health officials, retired doctors, nurses, police officers, universities, should make partnerships with the respective countries in, first, Africa, and then hopefully also elsewhere, to train young people to help out as medical aides in the tradition of the Civilian Conservation Corps program of President Franklin Roosevelt: training people on the job and starting health deliveries, teaming up in partnerships in Africa, but also at the same time organizing the delivery of food.

There is an agricultural crisis in the United States and in Europe; many farmers are losing their farms. They want to produce, but the cartels have created conditions that have ruined them, and when the COVID-19 pandemic broke out, many of the meat-packing plants immediately were infected because of the de facto slave-labor conditions in them.

So this initiative is meant to team up health workers and farmers—and double food production! The only way you can combat this famine is to double food production and start a tremendous shipment process to help the starving people, but at the same time, start building infrastructure and a world health system. Start to develop modern agriculture in cooperation between Africans and such partnerships.

And I really would like you to look at the proposal we put out at the end of May, “The LaRouche Plan to Reopen the U.S. Economy: The World Needs 1.5 Billion New, Productive Jobs,” and get it around.

The moral character of humanity is being tested if we can mobilize in such an unprecedented humanitarian crisis to help. As Beasley said in his speech yesterday, there is enough wealth in the world that not one single child would have to die or even go hungry, if only there were a change in attitude and politics. And that’s exactly what we have to accomplish!