This transcript appears in the January 15, 2021 issue of Executive Intelligence Review.

The Sweetness of Creativity 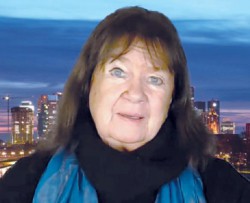 The following is an edited transcript of the opening remarks of Helga Zepp-LaRouche to Panel 4, “A Human Future for Youth: A Beethoven-Driven Renaissance of Classical Culture,” of the Schiller Institute’s December 12-13 conference, “The World After the U.S. Election: Creating a World Based on Reason.” Mrs. Zepp-LaRouche is the founder and President of the international Schiller Institute.

One may ask, why should young people get familiar with both Schiller and Beethoven? One good reason is that Lyndon LaRouche many times said that he believed that society would only be saved if a majority of the people were to learn to think in the way that classical poets and composers think.

That is, I think, absolutely true. Looking at today’s culture. You get the feeling that many young people are completely wasting their lives. They’re chasing things they will never get, at least not in the way they’re trying to find them. We have a breakdown crisis that places enormous challenges on people: the COVID crisis, world famine, mass unemployment, all of these things discussed earlier in this conference. Can you, under these circumstances become a great, creative person?

Look at all the people you know. What makes the difference between being a person who becomes truly creative, developing all the potential given to an individual as talents, and a person who just sleeps by, year after year, and dies as if he or she had never eventually woken up? I came to the conclusion that the crucial difference is if you, preferably as a young person, meet at least one individual who ignites in you this creative spark, this fire in the belly, this passion, that quality that gets you going, to become a truth-seeking person in whatever field happens to be your natural talent. That can be a person in your life. It can be your parents, it can be your teacher, it can be some other great person you meet. 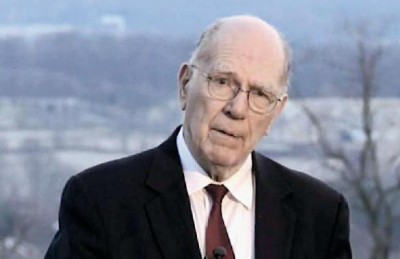 “Lyndon LaRouche believed that society would be saved if a majority were to learn to think in the way that classical poets and composers think.” Shown is LaRouche in The Rim of Fire, a video from March 15, 2011.

For many of us, it for sure was Lyn, Lyndon LaRouche. Meeting Lyn as a genius, the greatest genius of his lifetime—I’m convinced, and you can say that I’m saying that because I was his wife—but I don’t think that that is the main reason why I’m saying it: I think it’s objectively true.

But there are others you can meet. If you really get acquainted with Schiller and Beethoven, they can do the same thing. They can bring you to truly face the sweetness of creativity, of beauty in poetry, of beauty in music. That can change your life for the better, completely. 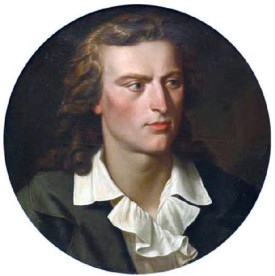 Louis Ammy Blanc
Friedrich Schiller developed the classical form, reconstituting the Greek identity of the beautiful, the good, and the truthful.

There are many things one can say about these towering giants of the German Classical period. Almost all of them died relatively young: Schiller was only 44 years old when he died; Beethoven, incredibly, with all the things he composed, he died when he was only 56 years old! Nowadays, this is a short lifespan. Both had incredible medical problems: Schiller had the first severe intestinal illness in his early twenties and suffered from it his whole life. Beethoven: can you imagine, the person who wrote these unbelievable pieces of music, started becoming deaf when he was 28 years old! In the last years of his life, he could not hear a single note of what he composed.

Did that prevent these two geniuses from being creative? No! As a matter of fact, when Schiller was too sick to compose a drama or a poem, he would translate, including translating Classical works. That was his, let’s say, “light entertainment.” We can learn a lot from these two individuals—and from Lyn for that matter, too, he frequently had many problems he was combatting.

You can overcome all that you think is containing you, preventing you from realizing your creative potential.

I like both of these individuals, Schiller and Beethoven, for many reasons. They both were absolutely convinced anti-oligarchical thinkers. If you read all the dramas by Schiller—and once you start, you probably won’t be able to stop, because they’re more suspenseful than any modern crime story. He always blasts the oligarchs and the oligarchical method: In Kabale und Liebe—Intrigue and Love in English—he blasts the way in which the nobility routinely destroys the harvests of the farmers, riding over their fields. In each play, he gives the country in which it takes place an absolutely crucial key to understand, in their own historical context, how the oligarchical principle works to destroy people.

It is famously known that Beethoven wrote the Symphony in E-flat Major in 1803, and wanted to dedicate it to Napoleon, whom he had first thought was becoming a great savior for all of Europe. But when in 1804, Napoleon crowned himself Emperor, Beethoven angrily changed this plan, and renamed the symphony. In the summer of 1806, when he was in Vienna, Prince Lichnowsky asked Beethoven to play for a group of French officers, who were there because of the war, in Vienna. Beethoven refused to play for them. And then Prince Lichnowsky tried to order Beethoven to do it. And Beethoven said:

Well, you are just a prince and you are accidentally in the spot you are, and there were many princes in the past, and in the present, and in the future, and it’s not your merit that you are in this position. But, I—I’m Beethoven. And I’m not going to play.

So it is that kind of pride in front of the thrones of the monarchy, of the oligarchy, which Schiller talked about very, very explicitly, which I think is extremely needed for today.

There are many other reasons. Schiller, for example, developed, together with Goethe, the classical form. This was an effort to reconstitute the principles of the Greek identity of beauty, truth, and the good, or the beautiful, the good, and the truthful. This inner cohesion of these values is extremely important, because any piece of art has to express that. The classical form—which, Beethoven developed further, to, in my view, an unprecedented height to the present time—also meant rigor in thinking. You develop a musical or poetical idea; you have a thorough composition, either in the poetry or in musical composition. Then you complete it by exhausting all potentialities in that idea. And then, it’s concluded and perfected, as for this moment. That is a rigor of thinking that people have completely lost and have to regain. 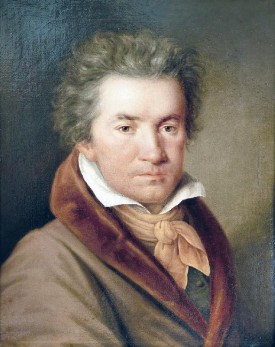 Also we must examine the question of how do you become a beautiful soul. This was an ideal of Schiller’s, which, by the way, when I was in school, as a relatively young girl, this was a notion which was sacred to me. I discovered it, due to some polemical teachings of my German teachers. Once I discovered that notion of the beautiful soul, it became one of the most important questions of what I really regarded as sacred. And I would not allow anybody to attack it or make jokes about it. Some other time, I’ll tell you what I did if people did that. But you have to have these precious things, things which you value completely.

Now that is something most people cannot say about themselves. Otherwise you wouldn’t have sudden freak-outs; people going off like a rocket, because they don’t have their emotions under control. That tells you, there is still some aesthetical work which needs to be done.

Schiller said that the most important question of his time was the education of what he called, in German, “Empfindungsvermögen.” I have not found a translation, but a good approximation is the sensory faculty that enables you to be full of empathy for the world, to have compassion, to absorb everything around you, but to give it structure. He discusses this in the Aesthetical Letters. He said that people in his time were like “crippled plants.” They had this quality or that quality, but the overall, harmonious development of their character was completely suffering.

This is why I think poetry —great classical music and poems, especially lyrical poems—are all absolutely crucial. What is the difference between prose and a lyrical poem? What can you express with a lyrical poem, or musical composition or a Lied, that you cannot say in simple prose? That has everything to do with what we discussed yesterday and this morning in our conference, the coincidence of opposites. Lyn discusses it as “the metaphor”; because metaphor that goes beyond prose, establishes a concept above the content of prose, pertaining to that quality of the human mind where true creativity occurs.

Therefore, if you don’t write poetry, or if you don’t try to study great poetry, you are losing exactly that quality which is really—as Schiller would say, poetry opens the way to the most secret motions of the soul; it gives you an inerrant key to these areas of the human soul.

I would like to encourage you to celebrate Beethoven’s birthday, which is in a few days from now. Let us make the year before us the Beethoven Year and the Schiller Year. I’m convinced that we are close to the Schiller time coming. So, between Beethoven and Schiller, I think we have incredible ammunition to intervene in this moment of history, and it’s a lot of fun.