This article appears in the June 4, 2021 issue of Executive Intelligence Review.

Energy-Flux Density as the Criterion for Physical Economy 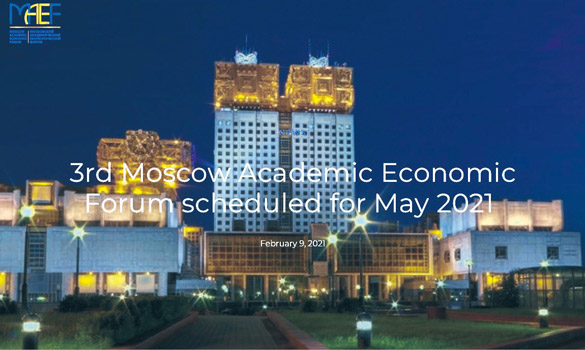 The Moscow Academic Economic Forum III, convened May 26-27, 2021 under the title, “Global Transformation of Modern Societies and the Goals of Russian National Development.” Helga Zepp-LaRouche, founder and President of the Schiller Institute, was invited to address a panel at the Financial University of Moscow May 27, as part of that conference. The following is an edited transcript of her remarks, presented under the title given as the headline above. [Box: Importance of the Moscow Academic Economic Forum]

Moderator: Let me introduce the President of the Schiller Institute, Mrs. Helga Zepp-LaRouche. She is a very well-known public figure in Europe and in the world. And she decided to share with us her experience, her vision on some real economics—maybe less “Greenie,” as it may be fashionable to say nowadays, but maybe more “Classical.” OK, the place is yours, please, Helga.

Helga Zepp-LaRouche: Thank you very much, and I want to thank the organizers of this very important conference for inviting me to speak to you.

It is almost one and a half years since the outbreak of the COVID-19 pandemic: What have we learned about how the different models of governance and economics—the U.S. and the EU on the one side, and China and some other Asian countries on the other—were able to cope with the crisis? You know the answer: while the pandemic is still not under control in the so-called “West,” and is raging out of control in many countries in Latin America, Asia, and Africa—while China had brought the situation pretty much under control within two months, and so did some other Asian countries whose basic value systems prioritize the common good over the exaggerated individualism one finds in the West.

The pandemic also revealed the fundamental flaws of the privatized health systems in the West, such as the vulnerabilities in supply chains for medical equipment due to the outsourcing of production to “cheap labor” countries, as compared to the efficiency of the Chinese model. But it was the developing countries that have had to pay the highest price, as the neo-liberal system deprived them of any health system worth mentioning. Already in 1973, my late husband, Lyndon LaRouche, had warned, that the IMF policy of conditionalities imposed on the so-called Third World, which put debt payments before investments in health, education, infrastructure, etc., would lead to the emergence of pandemics—of old as well as new diseases—since one cannot lower the immune system of entire continents over longer periods of time without causing such effects.

After the 2008 systemic financial crisis, nothing was done to correct its root causes. Instead, central banks relentlessly pursued a policy of QE (quantitative easing), and zero and even negative interest, favoring speculation at the expense of investments in the real economy. That widened the gap between rich and poor, eroded the productivity of the physical economy, and built up an inflationary bubble, which remained hidden for some time.

When the Covid-19 pandemic and the subsequent lockdowns hit, the various “stimulus” and “recovery programs” served as a welcome pretext to continue to bail out an already bankrupt financial system.

The total assets of the Federal Reserve grew from under $1 trillion in 2008, to $4.1 trillion in September 2019, to $7.8 trillion by the end of 2020. Similarly, the balance sheet of the European Central Bank (ECB) grew from €1.5 to €4.6 to €7.5 trillion by the end of April 2021. At this point, there is an unprecedented 75% increase in money creation year on year, heading into a hyperinflationary collapse, which a recent report by Bank of America ridiculously called “transitory hyperinflation.”

It is that imminent bankruptcy of the trans-Atlantic system that the central banks are trying to postpone by means of the “Great Reset,” “Green New Deal” or “Green Deal,” which is supposed to loot tens of trillions of dollars out of real industrial and agricultural production and direct all investments into a “green finance” bubble. The exit from fossil fuel-related industries into “carbon-neutral” production, construction, and architecture (basically, wood and bamboo) represents a gigantic technological leap backward. For the so-called advanced countries, it would lead to enormous price increases, a drop in the living standards, and social chaos. For the developing nations, it not only means the perpetuation of poverty and underdevelopment but also, in particular under the present conditions of pandemic and famine, massive depopulation. With his science of physical economy Lyndon LaRouche developed the yardstick needed, by defining the exact correlation of the energy-flux density used in the production process, and the associated relative potential population density which can be maintained at each level. Since wind and solar have very low energy-flux densities, and many countries, such as Germany, are exiting nuclear energy, the “Great Reset” threatens to lead to a population reduction of billions of people, which is the result desired by the neo-Malthusian advocates of “green finance.” The Green New Deal is the opposite of the New Deal of Franklin D. Roosevelt: It is the revival of the economics of Hjalmar Schacht, with the same results: mass death and war.

Fortunately, the recent agreement by the Russian and Chinese governments to cooperate closely in the development of nuclear energy represents a powerful counterpole. More generally, the Chinese economic model—which famously lifted 850 million people out of poverty—has allowed China, in 40 years, to develop from a very poor, underdeveloped country into one which has by far the most impressive high-speed train system in the world; which was able to quickly catch up with the leading space-faring nations in the world to become the first to land on the far side of the Moon; and which is in the forefront of the development of thermonuclear fusion technology.

The Belt and Road Initiative offers for the first time a concrete perspective for the developing countries to overcome poverty and underdevelopment, which is why almost 150 nations have joined it. It is the greatest infrastructure program in history, and holds the potential solution to addressing the urgent needs of regions of the world now threatened by pandemic and famine of “biblical dimen�sions”—as David Beasley of the World Food Program put it—such as Southwest Asia, Africa, and Latin America. In light of the threatened hyperinflationary collapse of the trans-Atlantic financial system, there is an urgent need for a real global New Deal, as a protection against the impact of such a blowout, starting with a global banking separation in the tradition of Roosevelt’s Glass-Steagall Act, which puts an end to the casino economy and allows for a new credit system based on a system of national banks in the tradition of Alexander Hamilton. A New Bretton Woods system—as it was intended by Roosevelt, and not as it was implemented by Truman and Churchill—must provide for the necessary long-term credit at low interest rates, in particular for the developing countries, to make real industrialization possible.

This pandemic, and looming new pandemics, such as UN World Health Organization Director-General Dr. Tedros Adhanom Ghebreyesus is warning against, underline the urgent necessity to immediately implement a World Health System—which means that every single country on the planet must have a modern health system like that the Chinese were able to mobilize in Wuhan.

The human species is the only one capable of creative reason, and the development of mankind up to the present point is the proof that Vladimir Vernadsky’s conception of the increasing power of the noösphere is the law of the universe. Therefore, there is hope that geopolitical confrontation can be replaced with a new paradigm of cooperation toward the common aims of mankind, including international cooperation in fusion research and space cooperation, which will demonstrate that there are greater gains to be made for everybody by bringing civilization into a new era. The summit of the Permanent Five of the UN Security Council proposed by President Putin, could become the beginning of such a new paradigm. We must organize an international anti-Malthusian alliance to support such a new paradigm! 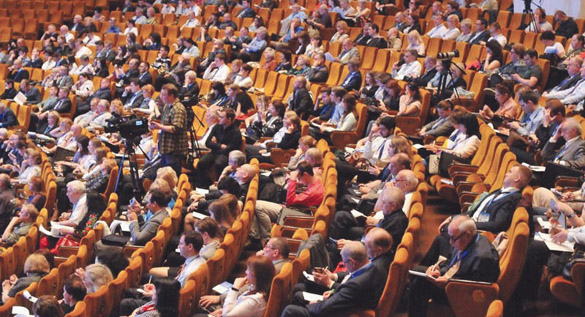 MAEF
Hundreds from the economics and scientific professions attended the MAEF in Moscow.

The Moscow Academic Economic Forum (MAEF) is a major economic debate and discussion conference for Russian economists, invited international experts, and professionals from related fields of science. This year’s MAEF, held on May 26-27, had the title, “The global transformation of modern society and the national development goals of Russia.” In his greeting, Russian President Vladimir Putin emphasized the mission: “Your forum, which brought together leading scientists and experts, representatives of government authorities, business and public organizations, is called upon to discuss a wide range of problems related to the dynamic development of the Russian economy, strengthening the domestic scientific potential—to address key national tasks.”

The MAEF was attended by hundreds from the economics and scientific professions, and chaired by Alexander Sergeyev, the chairman of the Russian Academy of Sciences and a professor of physics and mathematics; and Sergey Bodrunov, chairman of the Free Economic Society of Russia and president of the International Union of Economists.

In addition to President Putin’s and Foreign Minister Dmitri Lavrov’s greetings, the MAEF was sent many other “addresses” by Russian political and industrial leaders. S.N. Katryn, president of the Chamber of Commerce and Industry of the Russian Federation, noted that “This year the Forum is being held in a very difficult environment for our country and for the entire world economy.�Never before has the world faced such trials, a crisis of a colossal scale and its unprecedented consequences. There is natural interest in the Forum and its results, recommendations and conclusions of scientists and practitioners on how the Russian economy and the world economy will develop, what are the criteria and assessments of the actions that are being taken by the authorities and the business community today.”

Therein the importance of Helga Zepp-LaRouche’s introduction to the MAEF of Lyndon LaRouche’s development metrics against which to judge those actions: rising energy-flux density of technology—the increasing flow of work energy which a technology makes possible through a given area of work surface in a given period of time—and rising potential relative population density of societies. [back to text]