Beyond Multipolarity: The One Humanity

Helga Zepp-LaRouche is the founder and President of the Schiller Institute. This is an edited transcript of her presentation to the fourth panel, “The Coincidence of Opposites: The Only Truly Human Thought Process,” of the June 26-27, 2021 Schiller Institute conference, “For the Common Good of All People, Not Rules Benefiting the Few!” Subheads have been added. 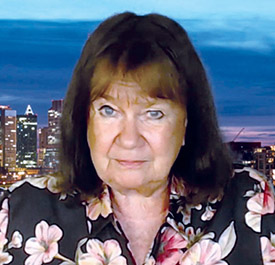 Let me first thank you Dr, Satcher for your words which capture the spirit of what we’re trying to do, in a very beautiful way. I could not start my remarks without also thinking about the incredible loss of Mike Gravel. If all people in the United States would live up to his standards, the world would be a very beautiful and peaceful place.

I want to speak about the Coincidence of Opposites, which may sound strange to some people—why use such a complicated notion? But sometimes you have to have a metaphor for some new concept. It’s new, but not so new, because it comes from the 15th Century; it is a method of thinking.

Many years ago—and this is on a slightly different note—I heard about a science fiction book—maybe it was a movie; it was a long time ago—where the story was that mankind somehow had destroyed itself, and no people were left on Earth.

Representatives of some other more advanced species from another planet landed a space vehicle on our planet, to investigate the reason for the disappearance of the human species. This was difficult because everything was pretty much destroyed. And, literally, the only object that they found was a book about methods of the mafia gangs in Chicago, who had fought each other to the death for the top position. Short of any other explanation, these visitors from outer space concluded, that it was this kind of thinking, of fighting “your enemy” to the death, that led to the extinction of the Earthlings.

If one considers the laws of evolution of our universe over hundreds of millions of years, and then the exponential intellectual and scientific development of the human species during only the last 10,000 years, if would be pretty stupid to risk the existence of mankind with a potential nuclear war. We would be depriving ourselves of the continuing experience of making an unlimited number of creative breakthroughs concerning the understanding of this physical universe—that has at least two trillion galaxies, according to the Hubble Space Telescope—and depriving the human species of becoming in this way, the only immortal species in that universe!

We are clearly at a crucial moment in that evolutionary process. It should be clear, that despite pretenses by some forces, the days of the unipolar world are definitely gone. We have definitely moved to a more multipolar world, but it’s not based on the same principles throughout. There is a conflict between those people who uphold international law, as established in the UN Charter, as it was developed out of the Peace of Westphalia into an international commitment to lawfulness for all people, versus the idea that there is a “Rules-Based Order,” in which these rules are made by the establishments of the Western countries—made by Wall Street, the City of London, supranational bureaucracies, who carry out policies in the interest of the power elites.

We must have a discussion in the United States, in Europe, and throughout the world, about how the human species can arrive back at legitimacy, not just legality in the international order. The first step is to go back to Five Principles of Peaceful Coexistence. [These principles were first agreed to between India and China in 1954, and then in 1955 at the Asian-African Conference in Bandung, Indonesia. —ed.]

If we were to go back to these principles, then the ideas that have been adopted in the last several decades—the “Responsibility to Protect” (R2P), “humanitarian interventions,” wars, regime change, color revolutions, unilateral sanctions—all these would have to disappear. Multilateralism is now a fact, but that is not really where mankind should be, because multilateralism still has the potential danger of a geopolitical confrontation, whereby one bloc says, “We have those interests which we have to defend against the interests of the other blocs.” That is why we have to have a radical change in thinking, and to learn how to think about the one mankind first. This is the Coincidence of Opposites as a method of thinking.

Learn from Nicholas of Cusa

This idea emerged in Cusa’s work and mission. In 1437, he was on trip from Constantinople to the Council of Ferrara and Florence, where he brought the entire delegation of the Greek Orthodox Church, all the key thinkers of that time: Plethon, Bessarion, the Patriarch, and many others. This conference was intended to be the unification of the Orthodox Greek and the Catholic Roman churches, for which Cusa had made many important pre-steps and contributions. Being on this journey on a ship for several weeks, all of a sudden he had what he called a “divine inspiration,” and he said, “All of a sudden, I can think something which no man has ever thought before.”

The gist of that idea was that, up to that point, the principle of the non-acceptance of contradictory assertions was the common axiom of all philosophers, and Aristotle was the most famous, was just the most explicit.

In his second major work, De Docta Ignorantia, Cusa writes about the nature of magnitudes and measurements, saying that the Maximum is also the One, since it contains everything, and therefore, it is also the Minimum, since nothing is outside of it.

I want you to understand this, and the following examples from De Docta Ignorantia as metaphors. They are pedagogical, mental exercises to get beyond the level of the senses.

Since the two sides of a triangle can not be shorter than the third, it follows that in a triangle, when one side is infinite, the other two sides must be infinite, too. And, since there can not be several infinites, they fall into one. Many more such reflections are in this book and I’m just mentioning these to whet your appetite to read Nicholas of Cusa’s books.

The Coincidence of Opposites is not a static condition, but is a concept of change, of the evolution from the non-living, to the living, to reason, as Megan Dobrodt developed in the second panel of this conference, along ideas of Vladimir Vernadsky, who spoke about “Kusansky,” as “the great stepping stone” to his own body of knowledge.

Cusa separated cognition into four levels: first, the level of the senses; second, the level of understanding; third, the level of reason; and fourth, what he called “visio,” vision, the level of the Coincidence of Opposites, where he said one has to sort of think like jumping behind a wall, to think “the one,” but to think it from the standpoint of hypothesis, and the future, and future discoveries.

Mahatma Gandhi, who was the source of many of the principles I mentioned earlier in this presentation, added the principle of what he called Sarvodaya, the idea that one has to make sure that the farthest behind will be the first, and that the progress of society is measured by the condition of the most vulnerable and weakest. This requires an emotion, which in Christian terms is called love, agapē. It’s called “ren” in Confucian philosophy and it requires that we educate our emotions to be on the same level of reason. And this, according to Friedrich Schiller, is possible through aesthetic education; that you educate your emotions, until you can blindly follow them, because they will never tell you anything different than reason demands.

This is why the Schiller Institute is named after Friedrich Schiller, because we believe that such an aesthetic education of all human beings is possible and that it is achievable, maybe even in our lifetime.

And that is why I think that the first real breaking point in this effort must be to fight in the context of this pandemic and the danger of new pandemics, to have a modern health care system in every single country, which is both in the self-interest of each of us, and of every nation. But I think it must become the absolute turning point in the history of mankind—introducing a new epoch where the one humanity is put first.