Afghanistan: The Bright Future for the
Coming Cooperation of the Great Powers 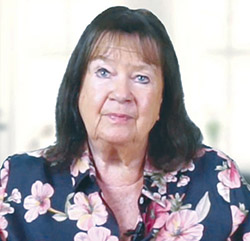 I greet you wherever you may be because we are at a very precious moment of history in Afghanistan, and actually in terms of universal history. There are long periods where states and people just continue a trend. They sort of muddle through, they find patterns. And then, there are what is called in German Sternstunden der Menschheit—magic moments in history—when it is possible to change the paradigm completely. And it depends on the quality of the leading individuals in a position of power, and ideas if the potential is wasted and the events end up in tragedy, or if such a moment is used, and a bright and fruitful future can be initiated.

I believe that with the troop withdrawal of the United States and NATO, there is such a situation in Afghanistan. It is apparent to everybody that long wars in Asia are not winnable, as Douglas MacArthur told Kennedy on April 28, 1961, when the President was in conflict with his advisors on what to do in Vietnam. MacArthur told Kennedy, “Never fight a land war in Asia.”

And it should be obvious, even to the most incurable warmongers on the planet, that in Afghanistan, no military solution can succeed. In that sense, there must be a recognition that all such endless wars, like in Vietnam, Afghanistan, Iraq, Libya, Syria, and so forth, belong to a paradigm of geopolitical thinking that has utterly failed. That means that the geopolitics of the British Empire, of the Great Game, of the Arc of Crisis of Bernard Lewis and Zbigniew Brzezinski, must be outlawed forever. And there should be an agreement among all neighbors of Afghanistan that geopolitical manipulation must be ended and replaced by the application of the Five Principles of Peaceful Coexistence.

For the people of Afghanistan, the suffering of having been the theatre of such a war for a very long time—ten years of Brzezinski’s war, playing the so-called Islamic card against the Soviet Union in the 1980s, which was the source of much of the subsequent terrorism from Chechnya to Xinjiang, including in the European nations. And then recently, twenty years of war of the United States and NATO troops against the Taliban. The suffering of the Afghan people has to stop! The horror of the fear of bombs, of terrorism, of nightly attacks must stop! There is a deep and profound longing for peace in the Afghan population. 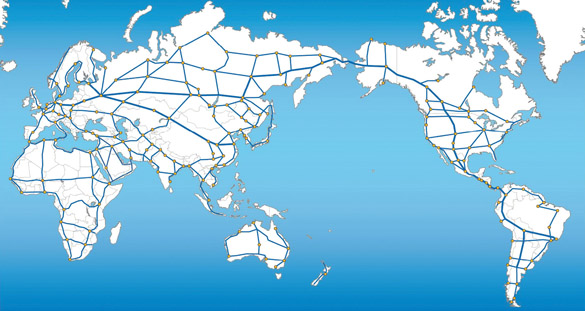 EIRNS
The major corridors of the World Land-Bridge.

In the history of all recent major conflicts, and many debates under the UN auspices, there was always one major misunderstanding however. Namely, the idea that one must have peace first, and only then can there be development. My late husband, Lyndon LaRouche, whom you just heard, was emphatic that the opposite approach must be taken. That there needs to be a clear economic development perspective first, and that there must be “shovels in the ground” as he put it and land-moving machines working building railroads, water systems, and hospitals. So that the different factions and the population at large can actually see the improvements in their living standards and can have hope for a better future. That the willingness for building a mutual trust in the process of national dialogue can be accomplished.

The only possible approach for Afghanistan must be peace through development. There is already an agreement among Pakistan, Afghanistan, and Uzbekistan to construct a railway from Tashkent near Mazar a Sharif and Kabul to Peshawar in Pakistan. And the construction of a highway, the Khyber Pass Economic Corridor between Peshawar, Kabul, and Dushanbe, which will be an extension of the China-Pakistan Economic Corridor. These projects can become the beginning of many infrastructure arteries connecting Afghanistan into the Eurasian Economic Integration from Lisbon to Vladivostok.

Looking at the entire region from Central Asia through South Asia and Southwest Asia from the standpoint of where that part of the planet will be 100 years from now, one can foresee integrated infrastructure networks of development. Corridors of fast railway lines, highways, waterways, expanded power production and distribution, and communication being the basis for industrial centers, greening of the deserts with the help of desalination of large amounts of ocean water, water management systems, and the creation of water resources through the ionization of the atmosphere, and the building of new cities.

Since it’s now generally known that most of the endless wars were not only based on lies, but that these lies were known to those involved, as was the case in the 2003 war against Iraq, as U.S Speaker of the House, Congresswoman Nancy Pelosi, so frankly admitted recently.

I think it is time for all the countries who participated in these wars as aggressors to be part of the reconstruction as a way of reconciliation. When Taliban leader Mullah Abdul Ghani Baradar was recently in China discussing with Chinese Foreign Minister Wang Yi, the latter stressed China’s commitment to the territorial integrity of Afghanistan, non-interference in internal affairs, and Chinese support for the sovereign process of a national solution by the Afghani people themselves

Baradar promised that there would be respect for the Chinese interests in return. It is mandatory that all international forces take such an attitude of non-interference in the internal affairs, which is the only way that the different factions can no longer be used for the pursuit of proxy interests by other nations, and that the pride of Afghanistan’s people, for which there are centuries of historic documentation, can be given tribute.

It is equally important that U.S. Secretary of State Blinken, during his recent trip to India, stated that the United States government sees a positive role for China in the economic development of Afghanistan. As well, the Afghani ambassador to China recently said that Afghanistan is the one place where the United States and China can actually cooperate, since they have common interests such as the suppression of terrorism and the elimination of opium production—about which we will hear from Dr. Arlacchi.

While some may think that the conflict among the forces represented by the present government of Afghanistan, the different ethnic groups, and the Taliban are insurmountable, and that a civil war is inevitable, there are historic precedents from which to draw conclusions. Contrary to the views of Henry Kissinger, who argued that the principles of the Peace of Westphalia are not applicable to the Middle East and Central Asia, they are, indeed, applicable.

After 150 years of religious war, of which the Thirty Years War was the concluding part, it was apparent to all war parties that since almost half of the villages and towns and agricultural assets—animals, etc.—were destroyed, that a continuation of the war would be enjoyed by nobody, since nobody would be alive to do so.

So, in four years of negotiations in Münster and Osnabrück, principles were debated and agreed upon in the Peace of Westphalia, which ended the war. The most important of these was the idea that first, for the sake of peace, from thence forward, all policy and foreign policy must be based on love and taking the interest of the other into account. And second, for the sake of peace, all crimes that had been committed in the course of the war by the one or the other side, must be forgotten. And third, that in the reconstruction of the countries, the state must take a leading role—a conception which gave birth to the economic method of cameralism.

Vadim Masson
An artist’s rendition of a Bronze Age ziggurat in the large town of Altyn-Depe, near Ashgabat in modern Turkmenistan, based on excavations.
Figure 2
View full size 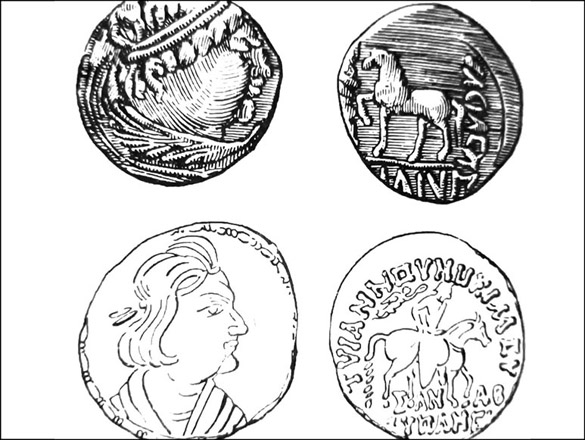 Vadim Masson
Two Bactrian coins (obverse and reverse). of the Greco-Bactrian King Heliokles I, circa 130 BCE, and an unknown ruler.
View full size 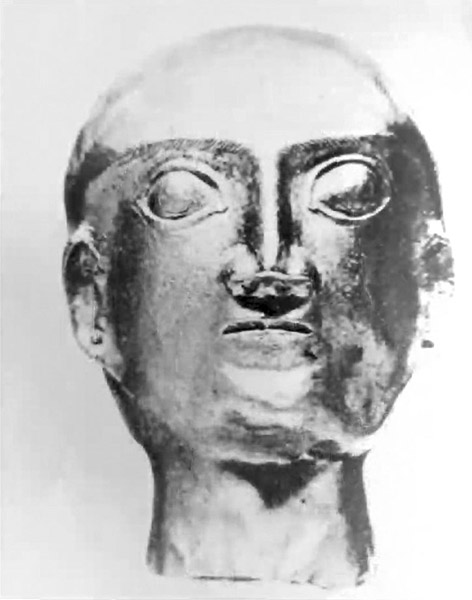 There is another dimension to the hope for a bright future for Afghanistan and its neighbors. At the recent “Central and South Asia Regional Connectivity: Challenges and Opportunities,” conference in Tashkent, Uzbek President Shavkat Mirziyoyev reminded the participants of the greatness of the civilizations in this region dating back as early as the third and second millennia BC. And while the knowledge about these civilizations is unfortunately not very well known anymore, it is due to the archaeological work especially in the Soviet era that there is now much more evidence that in Bactria and Sogdia, which is now Tajikistan, Uzbekistan and Afghanistan, there were urban civilizations which earned the area the name the Land of the Thousand Cities. (See Figure 1, an artist’s rendition of a Bronze Age ziggurat at the Altyn-Depe site near Ashgabat in modern Turkmenistan.)

There were also civilizations contemporary with the Achaemenid Empire in Iran, ancient Greece, and republican and imperial Rome. They had very impressive architecture and instruments, and coins. (See Figure 2.) It will be a great enrichment for all of humanity to learn more about this great history and to unearth the memory of this great civilization in order to have a dialogue of the best traditions and contributions of all civilizations.

There is actually not much known about this civilization, but I think this will be one of the absolute great joint tasks to show the 5,000 years of history of that region, and its contribution to universal history.

In this sense, Afghanistan is at a crossroad. Not only for Eurasian integration, but also at a crossroad for the universal history where we all can leave the age of immature adolescence behind us, and enter an era of adulthood, in which we concentrate on the common aims of mankind. This approach is absolutely not one of “realpolitik,” but it stems from the inside in the identity of human creativity which always has the vision of the higher One, which transcends the conflict of the Many. This corresponds to the laws of the physical universe, or if you want to express the same idea differently, it coincides with the divine order of Creation. Or, if you still want to express it differently, it coincides with the Five Principles of Peaceful Coexistence.

I hope I have provided some initial ideas for a fruitful discussion, because this is a window of opportunity which absolutely must not be missed.