This transcript appears in the October 8, 2021 issue of Executive Intelligence Review.

The following is an edited extract from the transcript of Helga Zepp-LaRouche’s weekly webcast on September 29, 2021. Three exchanges took place with host Harley Schlanger on the prospects for furthering global development, given the confrontational stance of the United States toward China and Russia. 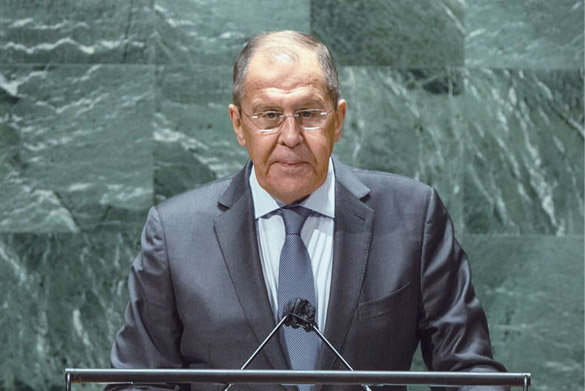 Harley Schlanger: Let’s take a quick look at developments with Russia and China, in relation to the strategic picture. Russian Foreign Minister Sergey Lavrov’s address to the UN General Assembly September 25 included his quite important mocking of the idea of the “rules-based order,” as “might makes right,” saying instead “right makes might.”

Helga Zepp-LaRouche: Sergey Lavrov’s speech was very important, because he contrasted very, very clearly the only existing international law, represented in the UN Charter, with the so-called “rules-based order,” which represents arbitrary rules of a club, the special interest of the so-called West, which is not international law but it is completely arbitrary.

He then gave a long list of examples of such a double standard, most emphatically, naturally, the question of which country is recognized: Kosovo was recognized, but then the “Falkland Islands,”—the Malvinas is their better name—are being kept as a possession of Great Britain, even though they are 12,000 km from Great Britain. The possession by Great Britain of these Malvinas is respected by the international community, which is completely false. And, naturally, Crimea is not the result of an “annexation” by Russia and Putin, but as Lavrov clearly reminded people it was the reaction to the right-wing coup in Kiev with Western support. There were a lot of Nazis in this new government, and the population of Crimea voted to not be part of this and to reunify with Russia.

So, this is really important, that these narratives are being created in such a way, and since people normally have a short memory, it is important to remind people of what actually happened.

Schlanger: On the China question, President Xi Jinping’s call for a Global Development Initiative [made to the UN General Assembly September 21] is a significant development. And, China’s State Council Information Office has just issued a White Paper about how China has eliminated poverty. Why don’t you say something about that?

Zepp-LaRouche: This Global Development Initiative is really in line with what Xi Jinping has been saying the whole time about the “community for a shared future of mankind.” It is basically a plan to gear up the development of all nations to eliminate poverty, to have vaccines for everybody, to have food security, to have a well-rounded development of all nations on this planet. And to use especially high-technology investments to increase the productivity of such development plans. This is absolutely the right way to go, and the most reasonable. The Western countries could do it. Rather than taking this as a threat and trying with geopolitical means to squash it, they should join it!

The world is in such a horrendous condition, that even if all the industrial capacities are put together, it is not even sufficient to overcome the incredible starvation crisis in many countries quickly enough, combined with the pandemic—the complete breakdown. That would require that the Malthusian faction reform itself and remedy its axioms, something they’re not willing to do. But I must say, the Chinese are becoming increasingly self-assured.

This new, longer study, “China’s Epic Journey from Poverty to Prosperity,” is a story of how incredible the Chinese overcoming poverty and establishing more and more prosperous conditions for increasing parts of the population is, really in stark contrast with the Western way, where the rich become richer, the poor become poorer. This is a systemic competition but it does not look so great for the West.

Schlanger: This was highlighted by Jan Egeland, Secretary General of the Norwegian Refugee Council, after his trip to Afghanistan. It almost brings you to tears: It’s a discussion of the fact that there are hundreds of thousands of people displaced, living in refugee camps, who will starve to death this winter, if there’s not aid.

A similar situation exists in Haiti. And so, the idea of depraved indifference from the West, as opposed to the idea of the Global Development Initiative coming from China—what you’re pointing out—does make a stark contrast between the two paradigms.

Zepp-LaRouche: The Schiller Institute is in a worldwide mobilization, starting with these two “hotspots,” if you wish: Afghanistan, where more than 90% of the population is food insecure, without medical supplies, and where starvation is developing very, very rapidly, and Haiti.

The situation in Haiti is almost worse, because this country is in such a horrendous condition after the August 14 earthquake, followed by several terrible weather conditions, and is now practically without a government. Haiti’s President was assassinated under very dubious circumstances, and the situation is practically lawless, its people are in chaos, nothing is functioning, there’s hunger, COVID-19.

So, we have added Haiti to our campaign to make the development of Afghanistan the beginning of a new paradigm. All of Afghanistan’s neighbors are already involved in planning how to integrate Afghanistan into the Belt and Road Initiative, and to stabilize Afghanistan. China is planning to invest something like $80 billion—naturally a medium-term plan; nevertheless, they are committed to doing that.

So, these are our two foci, trying to get action for these two places which are really in need, and change the policy. And to make that, hopefully, the beginning of a change in the attitude of the United States, the European countries, and other so-called “advanced” countries. Because we are in an incredible situation: In Iraq and Syria, more than 90% of the people there are also not eating enough; Yemen is a horror show, where children are dying. In Africa, many countries have been hit by drought, by locusts, by COVID, starvation.

There must be a change in the attitude! Depraved indifference is the notion we are trying to get people to reflect upon. Because you have so many people in the West who are not even interested! They just go about their business as usual. But the only way the United States and the European nations will overcome their own problems, is by focussing on the mission to overcome the underdevelopment of the developing countries, which would be very easy. It would be as easy as it was to reconstruct Germany after the Second World War—the so-called ‘German economic miracle.’ It’s infrastructure! Invest in physical economy! Shift from the idea of speculation and profit, to the idea of the common good which always has to start with investment in physical infrastructure development. If we cannot get the West to make such a shift, then it is almost a foregone conclusion that the West will go under, like the Roman Empire, because of decadence—a depraved state of mind.

So, we intend to shake people, and get them to see that the way to go is to stop this geopolitical nonsense—which can only end up in the annihilation of the human species—and join hands with the countries of the Belt and Road Initiative and have joint projects in Southwest Asia, in Africa, in Latin America, and move civilization to a condition where the laws of the universe are also the basis of the political and economic policy. That’s why natural law does exist, and if the policies for a very long time do not cohere with natural law, then you have collapses, and then you have museums where you can see the relics and fossils of civilizations that didn’t make it—only this time, they’re all sitting in one boat.