This article appears in the October 29, 2021 issue of Executive Intelligence Review.

A Chinese Contribution to Universal History Viewed From the Future

Helga Zepp-LaRouche, speaking as the President of the Schiller Institute, participated in the October 14-15, 2021, high-level International Academic Forum in China, 2021, “A New and Uniquely Chinese Path to Modernization,” hosted by the Chinese Academy of Social Sciences (CASS), in Beijing, China. That forum serves as an important platform for the promotion of exchanges in philosophy and social sciences between China and the world. More than 100 scholars from various universities, thinktanks, and academic institutions from twenty nations participated.

The meeting opened with a speech by Huang Kunming, a member of the Political Bureau of the Communist Party of China (CPC) Central Committee and head of the Publicity Department of the CPC Central Committee, in which he noted, “Over the past 100 years, the CPC has led the people in pioneering a new and uniquely Chinese path to modernization and creating a new model for human advancement…. China will follow its own path, strengthen exchanges and mutual learning with other countries, and make greater contributions to the world with the new achievements of modernization.”

Zepp-LaRouche’s call for a dialogue on the highest level all cultures of the world in her speech elicited a very positive reaction from the panel moderator, who emphasized that the juxtaposition of both the greatest poets and thinkers of the West with those of China demonstrates that while they represent very different cultures, the dialogue between them represents truly universal values. One can see this idea expressed in the anthem of the European Union (EU), Schiller’s and Beethoven’s “Ode to Joy.” Wikimedia Commons/Brücke-Osteuropa
Deng Xiaoping’s “reform and opening up” policy, begun in 1978, ushered in an historically unprecedented level of transformation. Here, a roadside billboard honoring Deng, at the entrance of the Lychee Park in Shenzhen, China in 2007.

China is presently the only country that has a clear and exciting vision for the future, namely, that by the time of the 100th anniversary of the PRC [People’s Republic of China], China wants to have become a “modern socialist country that is prosperous, strong, democratic, culturally advanced, harmonious, and beautiful.” On the basis of its incredible record of success, especially in the last 40 years, there is abundant reason to assume that this goal has an overwhelming chance of being reached.

The success of the CPC [Communist Party of China] in unifying China and transforming China from a country that had suffered aggression, occupation, and plunder by the imperial powers, into the present engine of the world economy, is one of the greatest civilizational accomplishments in history! The creation of the CPC, after experiencing its century of humiliation, [including] the arrogant injustice of the [1919] Versailles Treaty denying China its own territory, set China on a course of gaining sovereignty, which after decades of more war and civil war, led to the founding of the PRC. The Chinese people had gone through terrible hardships and the country was very underdeveloped. However, with Deng Xiaoping’s “reform and opening up” policy that began in 1978, an historically unprecedented level of transformation occurred. Deng was the first to use the notion of “Xiaokang” to give the “Chinese dream” of modernization a name. 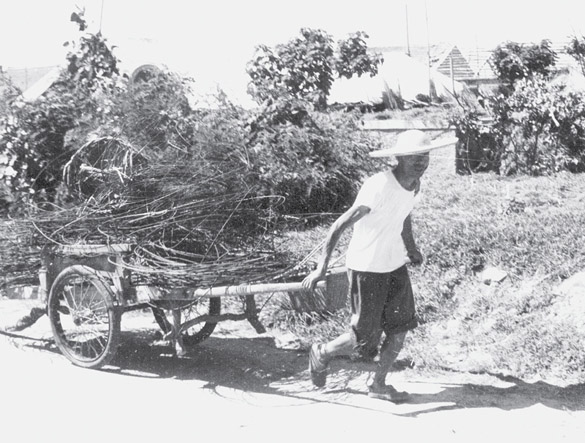 EIRNS/Helga Zepp-LaRouche
China has come a long way in 50 years. Above is a typical form of transportation just outside of Shanghai at the peak of the Cultural Revolution in August 1971. Below, the first intercity, ultra-modern rapid rail system in Hainan Province, opened to the public on July 1, 2019. Shown is the station in Haikou.
View full size From a primarily rural country based on manual labor, China developed into a country with the largest high-speed train system in the world, and while starting relatively late with its space program, China was the first country to land on the far side of the Moon with the Chang-e-4 mission. In February, the Tianwen-1 Mars probe succeeded in transporting the rover Zhurong to explore Mars. The Wukong dark matter probe satellite is state of the art, and Chinese nuclear scientists have developed third generation nuclear reactors, the pebble bed reactor, and advanced research in thermonuclear fusion technology.

Added to those accomplishments, was the lifting of 850 million people out of poverty, substantially increasing life expectancy and improving the living standards of the Chinese people. With the New Silk Road, the BRI , China is working on the largest infrastructure program in history and in this way offering for the first time the hope to overcome poverty and underdevelopment left by the colonial powers in developing countries. Xi Jinping’s vision for a shared community for the future of mankind is the most far-reaching conception for a completely new era in the history of mankind, which for the first time provides a model for a world without war.

China was the first country to contain the corona virus by applying strict pandemic measures, building new hospitals of a thousand beds, and mobilizing the whole country in solidarity, while at the same time exporting and donating medical supplies and then vaccines to many countries in the world. With the concept of the Health Silk Road, China has also gone a good way to contribute to the establishment of a world health system, without which neither this pandemic nor future ones can be overcome. 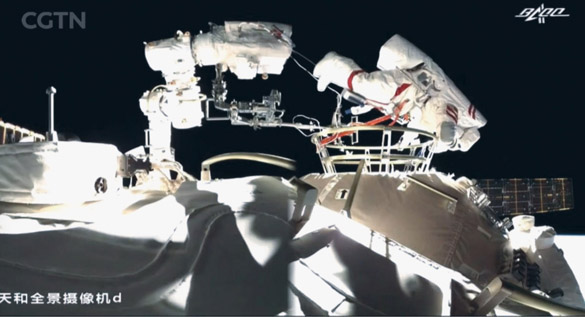 One of the most impressive features of the developments in China is the focus on the cultural improvement of the population. Everywhere in the country enormous efforts have been undertaken to preserve cultural works created over the course of 5,000 years of history and make them available in digital form to the greatest number of people, and in this way strengthening the cultural identity of the population, as well as providing inspiring activity for their leisure time. Negative cultural influences are being combated, such as Rap, Hip Hop, and the time wasted by youth playing destructive Internet games.

On the positive side, the great classical traditions of Chinese culture, such as Classical poetry, painting, calligraphy, music, and dancing, are being revived. Chinese opera, beautiful folk songs, and instrumental music are also becoming cherished treasures for China’s youth. CGTN
The Chinese Communist Party is promoting a culture that will determine what kind of society will exist two generations from now. Under the direction of Pang Kapang, conductor and artistic director, a professional orchestra of 90 performers from China and abroad made its debut in Suzhou in December 27, 2017.

President Xi Jinping has clearly adopted the view of the first Education Minister of the Republic of China, who was also the President of Beijing University, that the aesthetic education of people is what inspires creativity as well as moral character. He said explicitly that it creates students with beautiful minds, and thus generates the source of new great works of art. The intent to invest 10% of GDP into the cultural development of the general population is absolutely revolutionary.

So, given the trajectory of China’s development, especially of the recent 40 years, and the emphasis on the cultural values just described, there is every reason to believe that China can reach its goal for the kind of society it wants to be by the middle of the 21st Century—because it is in making the decision for certain cultural values being taken today, which will determine what kind of a society will exist two generations from now.

The main problem is however that the proponents of the liberal system regard the Chinese model as a rival and even adversary and they are determined to contain the further rise of China, of which the creation of the AUKUS is just the most recent example. Even if this description does not fit the official diplomatic language of today, this is essentially the same system as the British Empire, which was founded with the Treaty of Paris in 1763 and which deployed the British East India Society for the exploitation of India and many other developing countries, and, which conducted the Opium Wars against China.

Today this empire exists in the form of an exploitative oligarchy headquartered in the City of London and Wall Street. While America successfully fought its War of Independence against this Empire, after the victory of Lincoln over the Confederacy (which was allied with the British Empire), the British realized that the former American colonies could not be retaken militarily. So, the forces of the Empire concentrated on recruiting the American Establishment to the idea of running the world as an empire, based on the special relationship between Great Britain and the U.S.

If one looks at the cultural condition of the “West,” it is obvious that no such requirement of a cultural and moral improvement of the population exists. On the contrary, general cultural life is dominated by a counterculture governed by the principle: “Everything is allowed!” As a matter of fact, the more crazy and degenerate an “artistic” idea is, the more chance it has to get featured in the mass media. There are articles in the media in which it is admitted that a population dominated by base impulses can be more easily controlled politically. It is from this liberal point of view that the accusation is derived that China is an “autocratic society” which imposes cultural values on its population and suppresses “freedom” of individual expression.

So, who is right? Is it just a matter of opinion, in which each view is equally legitimate?

Mankind is the only species which can create its own future by developing a beautiful vision of what the future can become and then work to accomplish that goal. Depraved cultures, such as cultures dominated by empiricism, sophistry, and relativism, however, deprive the individual of the ability to formulate creative hypotheses about the future, as this would require raising oneself above the level of sense satisfaction. Thus, the empire relies on confrontation, aggression, and projection of its own motives on the chosen adversary.

The problem is not that China is autocratic, the problem is that the West has moved away from its best cultural traditions, such as the Italian Renaissance, the German classical period, and the ideals of the American Revolution. These values are still there but are not sufficiently active.

The best China can do therefore is to engage with the European nations and the U.S. in a dialogue of classical culture, in which each side emphasizes the best and most noble conceptions. It is the pedagogical effect of classical culture, which elevates people above the level of sense perception and opens up an understanding of the potential immortality of the human species. By having a spirited dialogue between Confucius, Plato, Archimedes, Zhu Xi, Wang Yangming, Nicholas of Cusa, Leibniz, Du Fu, and Schiller, just to name a few, people can develop a concept of the Simultaneity of Eternity as it is expressed for example in the painting “The School of Athens” by Raffaello Sanzio da Urbino.

The best way for China to succeed in its goal for 2049 is to strengthen the efforts of the Cultural New Silk Road, because the more countries on the planet that also develop the goal for themselves of developing a culturally advanced, harmonious, and beautiful society for themselves, the better are the chances that all will discover the underlying universal principles which make us human and represent the basis for the shared future of mankind.