THE SUMMIT FOR DEMOCRACY

The following are excerpts from Helga Zepp-LaRouche’s strategic webcast on December 1, 2021. The full Schiller Institute webcast is available here. 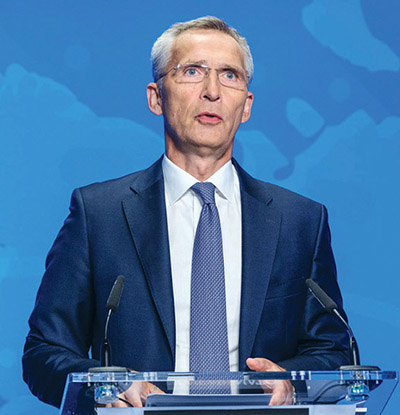 NATO
As at the NATO foreign ministers’ meeting in Riga, Latvia on Nov. 30, 2021 (below), NATO Secretary General Jens Stoltenberg (above) and the NATO leadership argue from the premise that NATO has vital security interests, but Russia and China have no security interests that NATO needs to respect.
View full size

Harley Schlanger: You mentioned the danger of geopolitics underlying the continued underdevelopment of the former colonial world. We see this again at play in the mobilization by the U.S. war hawks of NATO against Russia over Ukraine. It’s worth noting, there are meetings going—the NATO foreign ministers’ meeting, there was a NATO summit last Monday in Brussels. But at the same time, they’re announcing the prospect of a Biden-Putin meeting some time earlier next year. Catch us up on just exactly how dangerous this is, because the Russians are not playing games.

Helga Zepp-LaRouche: According to very qualified experts, both in respect to China and Taiwan, as well as in respect to Russia and Ukraine, red lines that have been drawn by these nations pertaining to their absolute security interests, have been crossed several times, and the West just ignores them. But this will come with a price, eventually, because you cannot continue to do this.

And then you can see how this is moving toward a potential point of no return. This is very, very dangerous. And the same goes for China and Taiwan, where the red line has been crossed several times by essentially U.S. forces giving credibility, or giving encouragement to the forces of independence in Taiwan. And the biggest danger, naturally, is that these two conflicts would flare up at the same time, and we would be in World War III in no time.

So, I really think this should be in people’s consciousness, and I cannot see any reasonable debate in the public media, or among politicians warning of such a danger. And that is almost like sleepwalking into World War III. Schlanger: Not surprising, we have the comments of the Chief of MI6, British foreign intelligence, Richard Moore, who made his first major public statement just the other day, and what he said is that the NATO countries must take on Russia, China, Iran, and terrorism, but the primary threat is coming from China. So just one cue, you have a total mobilization of NATO along these lines, of crossing the red lines.

Now, ironically, there’s going to be a “Democracy Summit,” called for by Joe Biden, supposedly to counter the authoritarian regimes. Do you have any comments on this, Helga?

Zepp-LaRouche: Yes, that is a strange thing: Because if you look at the countries which are invited—and I don’t want to step on the toes of any of these countries, but there are many of them which are generally not regarded as “democracies,” at all! And on the other side, if you look at the list of countries that are not invited, you have such countries as Russia, China, Hungary, many countries. So, what is going on here? It forces countries which are being categorized as being “autocratic regimes,” into an alliance! So, you are moving Russia and China closer together; there was also recently a joint statement from Russia and China in response to all of these things. So, you are creating new, geopolitical blocs! And this is very, very dangerous. I think it’s a typical case of somebody who sits in a glass house and throws stones, because the state of democracy in the United States itself is not exactly one of glory. EIRNS/Sylvia Spaniolo
Senate candidate Diane Sare taking her “Save the Humans!” message to the streets of New York City, Nov. 2, 2021.

So, what happened? Without much public attention, New York changed the rules. Previously independent candidates had to collect 15,000 signatures from eligible voters, within 6 weeks, which is a very short time to do that. Without public debate, the rules were changed to require 45,000 signatures, in the same period! And if you know the business of collecting signatures, you always have to collect at least double the given amount to be sure that you have enough valid ones. So that would mean, she would have to collect close to 100,000 signatures in 6 weeks! Now, that makes it almost unsurmountable.

And at the same time, they changed the rules for smaller parties, that they don’t need 50,000 votes from the previous election to reappear on the ballot, but they need 2%. Now, that throws out the Libertarian Party and the Green Party, so it is a completely arbitrary way of changing the rules in such a way that only the officially “mainstream” approved parties like the Republican and Democratic Party have a chance to run.

Now, Sare is fighting that, and one part of the fight is to take this to the Democracy Summit, because if the United States wants to be the leader of democracy, they should apply more democracy at home, first, because it would give them a better position to speak on the issue.

I think the party system is completely wrong, as George Washington made the point, when he left office, by warning that the party system is very dangerous because it leads to one section of the population trying to rule over the other. And we see in Germany right now, the party system does not function. In Germany, it does not matter if you vote for the Liberal FDP party, or the Green Party, which are very opposite on almost all points, like migration, like taxes, many other issues; or you vote for the SPD, because now you have a coalition government of all three. And they have to make a coalition agreement, which means you get a cocktail of the opinions of these three parties, but every voter gets the same cocktail to drink, which probably tastes very bad for most of the people who thought they voted for their preference.

That is one more case demonstrating that the parliamentarian system really does not function. And I could say a lot more about it, but rather let me just suggest that it would be wise to think about a representative system which really works. And there are models different than the one we have right now in most Western countries.

So, I really think that the Democracy Summit will be tested by all of these things. And we should see. But right now, it looks like a geopolitical maneuver, rather than any concern about democracy as such.

Schlanger: One aspect of the Democracy Summit is going to be the continued attacks on Russia, supposedly for suppressing opposition, suppressing free press. All you have to do is look at the example you gave from Diane Sare’s case, of keeping parties and candidates off the ballot, on top of which you have the censorship. And clearly the U.S. is no longer qualified as a democracy under those kinds of definitions.

Now, at the same time you have the war buildup, we’re watching the disintegration of Western economies, with the combined effects of hyperinflation and the collapse of efficient energy systems. There’s recently been reports from Germany on this that are really quite astounding. The whole world is now facing a profound crisis in the aftermath of the COP26 summit.