Psychopaths Are Threatening Our Existence! Germany Must Leave NATO! 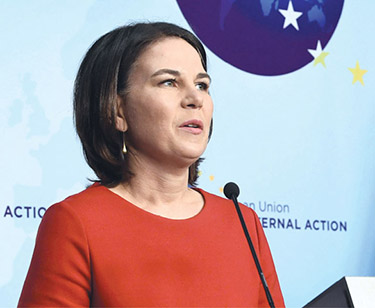 Dec. 11—In view of the political orientation of the new government in Berlin, it seems almost hopeless to demand Germany’s immediate exit from NATO. But if Olaf Scholz is serious about the oath of office he took two days ago when he took office as Federal Chancellor, namely that he “wants to dedicate his energies to the well-being of the German people, increase their benefits and protect them from harm,” then he has to set this exit in motion immediately. Because in NATO, and especially in the U.S.A. and Great Britain, there are influential forces who, for geopolitical reasons, toy with the existence of Germany and beyond that, of all of humanity. The real reason for the global military muscle play on multiple fronts is the systemic collapse of the neoliberal system, which they are trying to cover up with a complex confetti shower of anti-Russian and anti-Chinese narratives.

Some weeks ago, a media scenario was set up about the alleged preparation for a Russian military invasion in Ukraine, of the existence of which the U.S. National Intelligence Director, Avril Haines, tried to convince the NATO ambassador in Brussels, but Russia emphatically denied it. For weeks there were simultaneously a series of provocations—such as a NATO maneuver in which a nuclear attack on Russia was rehearsed and U.S. planes flew within 20 kilometers of the Russian border—as well as drone attacks in eastern Ukraine and daring “reconnaissance flights” in the Black Sea.

Russia accused NATO of crossing several “red lines” in Ukraine and of failing to respond to protests about it. In the run-up to the virtual summit proposed by President Biden at the height of the tension between Biden and President Putin, Putin demanded legally binding agreements that NATO would not expand further east to the Russian border, which Biden initially rejected with the argument that one does not accept Russia’s “red lines”; while NATO Secretary General Stoltenberg emphasized that Russia has no right to develop “spheres of influence.” 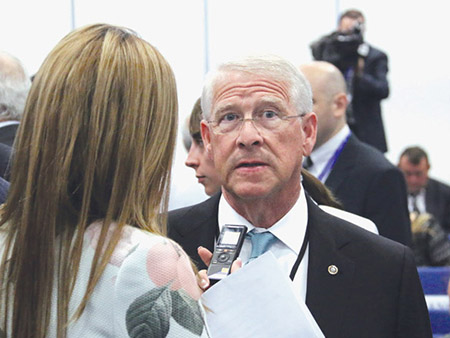 CC BY-SA 2.0
U.S. Sen. Roger Wicker of Mississippi, who said, “Military action could mean that we stand off with our ships in the Black Sea and we rain destruction on Russian military capability.... We don’t rule out first use nuclear action.”

Amid the escalation of tensions, the second-highest ranking Republican member of the Senate Armed Services Committee, Sen. Roger Wicker of Mississippi, threatened a first strike with nuclear weapons: “Military action could mean that we stand off with our ships in the Black Sea and we rain destruction on Russian military capability.... We don’t rule out first use nuclear action.”

Tulsi Gabbard, former Congresswoman from Hawaii and a lieutenant colonel in the Hawaii Army National Guard, commented on Wicker’s tirade: “Anyone who would propose or even consider what he is saying as an option, must be insane, a sociopath or a sadist.” Wicker is no exception with his proposals, which would destroy not only the American people and the whole world, but also the Ukrainians, whose democracy is supposedly being protected. The same rhetoric comes from the Democrats and Republicans in Congress, the administration and the media, the same neoconservatives and neoliberals who dragged the country into the regime change wars in Iraq, Libya and Syria.

One can only agree with Tulsi Gabbard. Anyone who has followed the escalating propaganda against Russia and China, which has come from practically the entire political spectrum in the United States in recent years, will be reminded of the saying, that whom the gods would destroy, they first make mad. 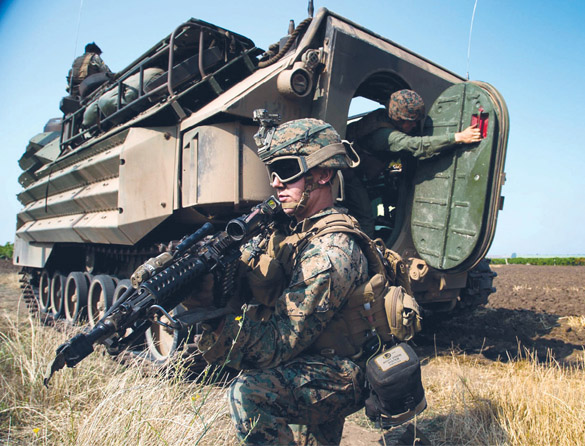 The Reality of Ukraine and Iran

The content of the two-hour conversation between Biden and Putin is not yet public. In any case, Biden contacted four NATO partners regarding the legally binding assurance of a limitation on NATO, and announced further consultation with all NATO partners. And of course, all European governments know the true story of the Victoria Nuland-backed coup in Ukraine in February 2014, the active role of neo-Nazis from the tradition of Stepan Bandera in this coup, and the lie about the alleged annexation of Crimea by Putin, which was in reality the sovereign choice (by voting) of the people in Crimea that, in view of the neo-Nazi terror in Kiev, they would rather belong to Russia. Perhaps it is time for the European governments to admit the truth about the events in Ukraine, in which they were naturally involved with their charitable foundations, before World War III breaks out on a fake narrative of Putin’s alleged aggression.

But even if the acute Ukraine crisis can be temporarily defused—Biden speaks of postponing Ukraine’s NATO membership for ten years—the acute danger of a world war remains.

The second source of danger from which a war could spark and spread is the situation surrounding the nuclear program in Iran and the JCPOA [Joint Comprehensive Plan of Action —ed.] treaty, which the Trump Administration had terminated. Although CIA Director William Burns has just confirmed that the secret service is not aware of any indications that Iran is working on a nuclear weapons program, Israel also sees the civilian nuclear program—to which Iran is entitled under international law—as a threat to its lifestyle, as Israel’s Defense Secretary Benny Gantz pointed out during his visit to the Pentagon, where Secretary of Defense Austin affirmed that the United States was determined to prevent Iran from acquiring nuclear weapons.

But the most dangerous situation is undoubtedly the US-China conflict over Taiwan. After the world got dangerously close to World War III as the situation in Ukraine worsened, a number of American political experts spoke out—and this is new—about the American habit of staging pretexts for the initiation of military operations. The retired diplomat Peter Van Buren referred to the explosion of the battleship USS Maine in the port of Havana in 1898 (the cause of the Spanish-American War [was] not a Spanish terrorist attack, but a boiler explosion); the incident in the Gulf of Tonkin, with which the United States entered the long-planned Vietnam War; and of course the 2003 Iraq War, in which everyone involved knew beforehand that the WMD story was a lie, as Nancy Pelosi has publicly admitted.

With regard to China, Van Buren wrote, it “appears to be the next war now searching for a reason.” Since China refuses to invade Taiwan and thus provide a pretext for war fever in the United States, he wrote that there could be a less problematic outcome, an arms race for hypersonic weapons. “But what if the U.S. has its mind set on a real war, as in Vietnam and after 9/11, and needs a palatable reason to be found?” asks van Buren, only expressing what has long since become obvious. 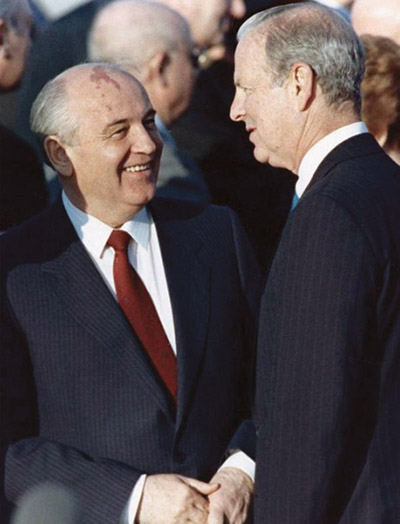 GWU National Security Archive
James Baker with Mikhail Gorbachov in Moscow, February 1990. NATO’s policy of confrontation with Russia has been obsolete since 1991. The world needs an international security architecture that takes into account the security interests of all nations.

Can it be assumed that these and many other “false flag” incidents are known to western governments and parties? Apart from maybe a few inexperienced backbenchers—absolutely! That is why the participants who took part in President Biden’s “democracy summit,” which should more likely be called a hypocrisy summit, are about as trustworthy as the organizers of the notorious “carpet bus rides,” where plush carpets are foisted upon unsuspecting pensioners as “real Persians.”

The idea that this is an alliance of the “good guys,” a community of values that campaigns for democracy, human rights and freedom, against the “bad guys,” the autocratic regimes that oppress their populations, is an advertising story with which a spoiled product is intended to be disguised with cosmetic plasters and sold.

At least since the U.S. administration and its “allies” left Afghanistan in an absolutely catastrophic state after 20 years of war (withholding money that belongs to the Afghans and thus exacerbating the worst humanitarian catastrophe on the planet, where 24 million people are threatened with cold death from starvation), none of these flawless democrats should use the words “human rights” any more. We should speak of the millions of dead, injured, and refugees as a result of the endless wars built on lies. And what about Julian Assange, whose only crime was exposing war crimes? He is being murdered by legal means before the eyes of the world.

The list could be much extended: The martial “pushback” policy of the EU using Frontex against refugees who are only refugees because they are the victims of the “endless wars”; the refugee camps, which Pope Francis compared to concentration camps; the consequences of the Malthusian policy of the Klaus Schwabs of this world, which sees the attempt to overcome poverty as the greatest threat to the “climate” and thus says any development must be stalled for decades through “conditionalities.”

On the other hand, the success story of the “autocratic” governments does not look so bad: China has not only lifted 850 million people of its own population out of extreme poverty, but given developing countries the chance to overcome poverty and underdevelopment for the first time. The United States has almost 800,000 coronavirus deaths with a population of 330 million people, while China has fewer than 5,000 deaths with 1.4 billion people. Perhaps—the Eurocentric carpet sellers might want to think about this—human life is worth more to the “autocratic” regimes?

Germans should really urgently draw the conclusion that remaining in a military alliance which, in the event of a crisis will result in their annihilation, may not be such a good idea. There is, indeed, an alternative to NATO’s policy of confrontation which has been obsolete since 1991. There is an urgent need to establish an international security architecture that takes into account the security interests of all nations.