The Westphalian Principle:
After NATO, A New Security Architecture 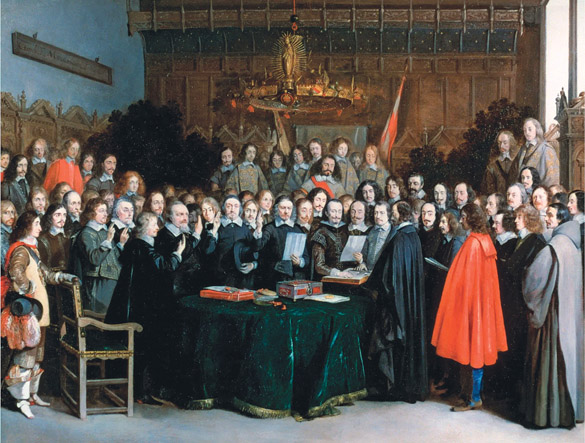 In the 1648 Peace of Westphalia, European powers ended more than a century of religious war among themselves by agreeing that each party would forgive what was done to it by another, and each would henceforth take into account the interest of the other. Here, Gerard ter Borch’s depiction of the signing at Münster.

Harley Schlanger: Helga, one of the points that you and your husband, Lyndon LaRouche, made repeatedly, is that this strategic conflict is shaped by the demands of the City of London and Wall Street—the global financier interests—who are insisting on continuing to be able to loot the world, but to do what? To prop up their bankrupt financial institutions.

On the other side, we have the Belt and Road Initiative, the moves toward Eurasian integration. Obviously, it would make sense to scrap this confrontation and look for cooperation. But you’ve recently raised the question of whether or not NATO should continue to exist. How would you look at this today?

Zepp-LaRouche: For Germany, for example, or most European countries, and even for the United States itself, to be in an alliance which, if it comes to war, would mean the extinction of all of its members, is not exactly a rational choice. Now, some in the United States may think that because it is part of a large island, many miles away from Europe, which they consider the potential theater of war, there may be a certain illusion of security. But I think if it comes to war this time, it would be a global war, including the United States.

For Europe, for Germany, it would mean within the first minutes of the conflict, Germany would cease to exist. So, I think what we need is a very serious debate: Does it make sense to be in a military alliance which, if it comes to military conflict—which is what a military alliance should protect against—you cease to exist? I think we should reflect on that. When the Warsaw Pact dissolved in 1991, NATO should have been dissolved, because it had lost its raison d’être—the enemy was no longer there. We proposed a peace order at the time, in the form of the Eurasian Land-Bridge. And there was even a period when there was serious consideration of incorporating Russia into NATO or changing the security alliance in such a way that it would accommodate the new situation.

And I think we have now, very seriously, a situation in which we have to replace NATO with a new security architecture which guarantees the survival and security interests of all. If you look in the history of such alliances or treaties, one can see very clearly, only when the security interests of all were taken into account, did it have a lasting impact on peace. When that was not the case, it led to war. The two most famous examples of this are the Peace of Westphalia, when, after 150 years of religious war in Europe, and more particularly the 1618-1648 period of the Thirty Years War, it was clear that no one would enjoy the victory, if the war were to continue. In some regions, one-third of everything was destroyed; in other areas, half of everything was destroyed: houses, villages, people. 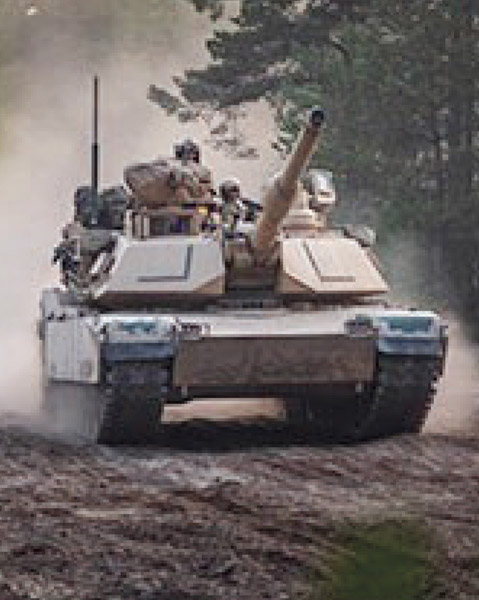 U.S. Army/Thomas Mort
The world needs a security architecture that takes into account all nations, including Russia and China. Shown, an Abrams tank in Operation DEFENDER-Europe 20 in Poland, “in support of NATO and the U.S. National Defense Strategy.”

In the four years of the negotiation for the Peace of Westphalia, the previously warring parties eventually agreed on principles which would guarantee a durable peace. And the Peace of Westphalia is still a very important precedent for what we should be doing today. The principles were: that for the sake of peace, all sides have to forgive what was done by the other side; and for the sake of peace, each side has to take into account “the interest of the other.”

And that is a very, very important principle, because you cannot have peace if you blatantly ignore the security interests of one or more of the relevant countries. When that was not considered, was, famously, the Versailles Treaty, where, contrary to the reality of what lead to World War I, Germany was proclaimed the only guilty party. Germany had to pay enormous war reparations which the Reichsbank accomplished only by massive money printing, which led to the hyperinflation. Then you had the Depression, and then, out of all of this, you had the Second World War, which was sort of the next chapter of the First World War. The utter failure of the Versailles Treaty is really what people should think about. Because you must take into account the interests, the conditions, in that case, of Germany, which led to the rise of the Nazis, led to the right-left street fighting, the total collapse, and naturally, the horrendous economic conditions.

So, what we need today, therefore, if we consider this, is a security architecture which does take into account the interest of everybody, and that emphatically includes Russia, it emphatically includes China. Therefore, I think that given the fact of this complex mess, which we have as a strategic situation, that you cannot simply take a partial problem, and solve it. That might work temporarily, but because we have a collapse of the neoliberal financial system, we have a hyperinflationary blowout going on right now, we are already seeing enormous disruptions because of the energy price, the food prices. We have famines, we are threatened with the danger of social chaos.

A Set of Solutions Among Nations

So, we need a solution which really addresses all of these problems at the same time. And it just happens to be that was what was developed by my late husband Lyndon LaRouche is still the solution. We need a reform, a reorganization of the bankrupt financial system. We have to get rid of this massive speculation, which is all hot air. Just because billionaires have become billionaires, that doesn’t mean the real economy is not collapsing. Many people are becoming poorer and poorer, and billions of people are starving. We need to change that. We need to have a global Glass-Steagall system, to go back to Hamiltonian national banking, and then initiate a new credit system in the form of a New Bretton Woods set of agreements.

Now that only can be agreed upon at the top level of nations, of maybe the G20 group of nations. Maybe that’s the appropriate body to call, on an emergency basis, for such a reorganization. Then, we need economic cooperation among nations. The obvious framework for this would be for Europe and the United States to cooperate with the Belt and Road Initiative in the development of Latin America, of those parts of Asia and Europe which are not yet developed; and a reconstruction of the U.S. economy which is very urgent—the U.S. is in a terrible state of collapse. And there are urgent development needs in Africa and Southwest Asia.

So, there’s plenty for these countries to cooperate on. And I think it was Ambassador Chas Freeman who recently said, “So what if the Chinese are building railroads? Let American trains use these railways. If the Chinese build a highway, let American cars drive on those highways.” In other words, just because China has already engaged in the Belt and Road does not mean that other countries should not cooperate!

I mean, just think about the enormous problems we have to solve: the development of Africa, the overcoming of the worst humanitarian crisis, not only in Afghanistan, but also in Syria, in Yemen, in Iraq, many, many other countries. So, what we should do, is we should put the Belt and Road Initiative on the table in the form as we proposed it, namely, the “New Silk Road Becomes the World Land-Bridge.” Agree with long-term economic cooperation agreements to engage in these projects, which would transform the world and make it a livable place for every country and every person on this planet. And then, take that economic cooperation, as the basis for a new security architecture which would not just take care of NATO’s interests, but which would include security guarantees for Russia, China, and every other country.

This is feasible. It’s rational. It would solve all problems at the same time. And the question is, can mankind take a solution which is so obviously needed, and which just requires a few people who have a vision, who have the courage to come forward in a moment like this. And I think that is what we should mobilize people to do. Because that is the clear alternative to the extinction of civilization. 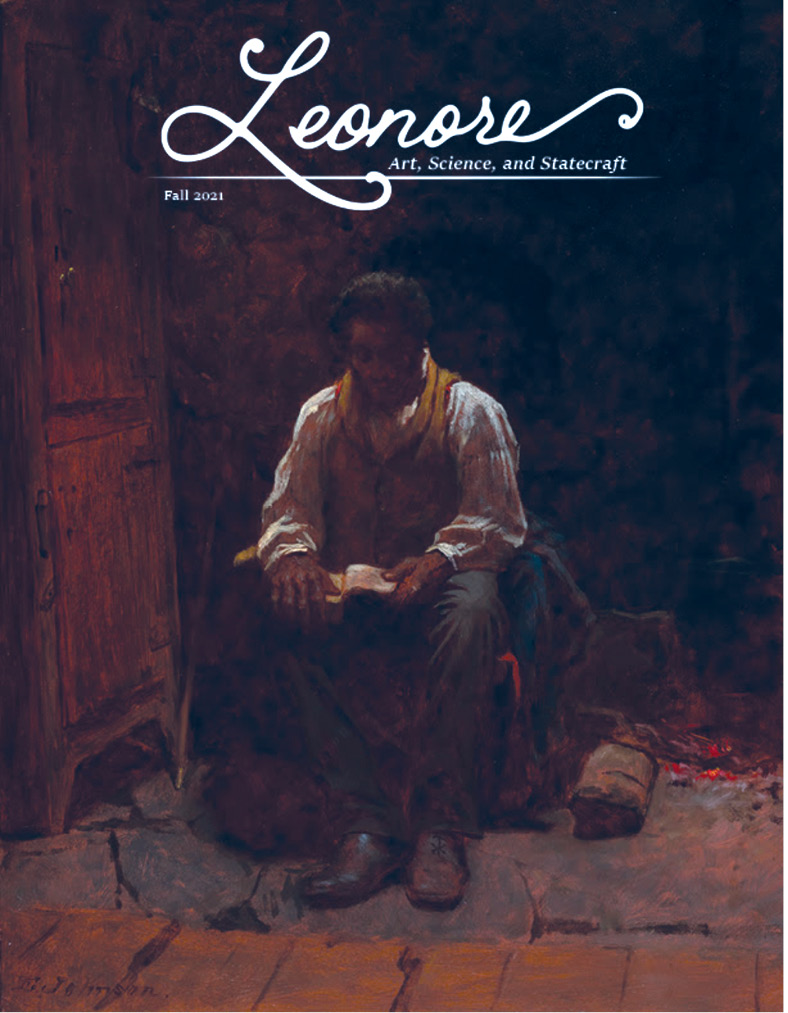