This is an edited transcript of the keynote remarks by Helga Zepp-LaRouche to the seminar, “The Humanitarian Crisis in Afghanistan: Toward a Long-Term Solution,” co-sponsored by the Russian International Affairs Council (RIAC) and the Schiller Institute (SI) on Feb. 10, 2022. Mrs. Zepp-LaRouche is the founder and President of the Schiller Institute. The full video of the symposium is available here. 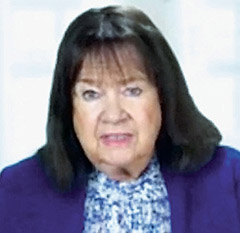 Well, I have a little bit of a different view. I think that whoever is responsible for the adoption of sanctions against Afghanistan and for the freezing of Afghan assets in the United States and in Europe, after the Taliban takeover in August, is also responsible for the following: According to German UNICEF [Executive Director] Christian Schneider, one million children under the age of five are acutely undernourished in Afghanistan, and their condition is such that, in Germany, they would have to be treated in an intensive care unit, which means that, under the current circumstances, they are likely to die. According to the United Nations, 8.7 million people are in an advanced state of starvation; 24.4 million, or 55% of the population, are in an emergency situation, which means they lack all the basic necessities of life; while 98% do not have enough to eat. More and more families are selling some of their children in the hope that the others will survive, and people are selling their organs.

The mass media in the United States and Europe, following a brief hype in August and early September, have reported almost nothing about this worst humanitarian crisis on the globe. The leaders of those NATO countries that withdrew so hastily from Afghanistan in August knew that 80% of the country’s budget came from aid provided by donor countries, and that the combination of the cancellation of these funds, the freezing of Afghan capital, and the sanctions, would strangle Afghanistan’s economy overnight.

After six months of unfolding tragedy and countless appeals that were in vain, except for a few recent small concessions, one must ask what the intent of this policy is? The argument that the Taliban first has to recognize the rights of women, and so on, becomes absurd, when those women and their children are dead. Is it the intent to sabotage the Taliban’s ability to maintain a functioning state, to such an extent that the opposition, including ISIS, al-Qaeda, drug traffickers, warlords, etc., gain the upper hand?

The consequence would be a new and bloody civil war, a hell, in which the civilian population—between hunger; freezing temperatures; COVID; epidemics such as polio, measles, Dengue fever, and diarrhea—will be crushed, and millions of refugees will attempt to seek safety in neighboring countries and in Europe. That would be the continuation of the British Empire’s “great game” of Bernard Lewis and Zbigniew Brzezinski that aims to ensure the geopolitical destabilization of Russia and China, and prevent the economic integration of Eurasia through the Belt and Road Initiative, by using the old instruments of terrorism, opium wars, and ethnic conflicts.

Should this policy “succeed,” it would be just one more element in the great final act of mankind’s tragedy that is now playing out on the stage of world history between the adversaries of the West, and Russia and China. And that has now reached a point described by the Bulletin of the Atomic Scientists as 100-seconds before midnight on the Doomsday Clock.

There is a counter-concept for saving Afghanistan, which I have named “Operation Ibn Sina.”

Ibn Sina, who lived some 1,000 years ago, was one of the greatest physicians of universal history whose Canon of Medicine remained, in part, a reference until the 18th Century. Ibn Sina was born in what is now Uzbekistan. His father came from Balkh in Afghanistan. In this time of the corona pandemic, it is extremely important to remember that Ibn Sina was the one who recognized, among other things, the immense importance of quarantine in combatting epidemics. In addition to being an outstanding Renaissance man, he can become a symbolic figure for saving Afghanistan.

Operation Ibn Sina can bring about a change for the better in two ways:

First, it can become a synonym for international cooperation in building a modern healthcare system and providing food for the Afghan people. If all the neighboring countries, as well as the United States and the European nations which fought in Afghanistan for 20 years as part of NATO and therefore have a moral obligation that cries out to Heaven, help the people out of this undeserved acute distress and cooperate in a crash aid program, the worst can still be averted.

In addition to the humanitarian aspect, Operation Ibn Sina also has a military-strategic dimension. If Russia, China, the U.S., and India—the four nations with the greatest military and economic importance or size of population—were to cooperate, this could become a confidence-building measure for resolving the major strategic conflicts. Afghanistan, unlike the strategic importance of Ukraine or Taiwan, is not one of the core interests of Russia and China. It is many thousands of miles away from the United States, while India, on the other hand, has a core interest in the stability of its geographic surroundings.

The cooperation among these four powers, together with the mobilization of other formats that exist, such as the “Troika-plus,” the SCO (Shanghai Cooperation Organization) and the OIC (Organization of Islamic Cooperation), with the aim of saving Afghanistan, can be a step toward a New Paradigm in international relations, without which the lasting survival of humanity will not be possible.

There is no place on this Earth—and that includes the strategically explosive potential of destabilization operations around Ukraine and Taiwan—where the moral fitness to survive of the human species is more tested than in Afghanistan. It is not our security that we need to defend in the Hindu Kush, as the then-German Defense Minister Peter Struck had claimed on March 11, 2004, to motivate German participation in the Afghan war, but it is our humanity.

Military strategists are invited to take into account what might be an unfamiliar domain of strategic thinking: The moral condition of the population—both their own population and their adversary’s. When the French Revolution failed due to the Jacobin terror, Friedrich Schiller found that “a great moment had found a small people.” Although the objective opportunity existed, the subjective moral capacity was lacking. He then wrote his Aesthetic Letters [published as the Letters Upon the Aesthetic Education of Man] with the conviction that from now on, any improvement in the political sphere would only be possible through the ennoblement of the character of the individual. He considered that the education of the capacity of the Empfindungsvermögen, of empathy, is the most pressing need of the times, because it “awakens the improvement in understanding.”

From this perspective, overcoming the depraved indifference in parts of the population, which makes them equally insensitive to the suffering of other peoples, and to the effects of their geopolitically motivated demonization of the supposed enemy, is a strategic factor of the highest order. Operation Ibn Sina should, therefore, become the flag under which all forces unite, who want to save the Afghan people, out of agapē, who want to bring about a new paradigm in strategic relations as the means of finally overcoming the threat of war, and who want to defend the humanity of our species.