The Need for a New Paradigm 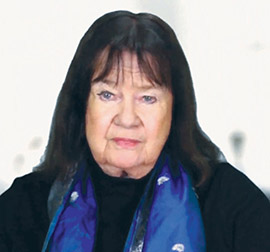 Dear conference participants from all over the world!

What brings us here together today, with participants from over 60 countries from four continents, is our utmost distress that the very existence of humanity is in grave danger. The aim of our conference is to arouse the awareness of ever larger social forces around the world, that because of the danger of the presently escalating strategic confrontation, there could be, soon, a full military engagement between NATO and Russia leading to a world war, which in all likelihood would mean the annihilation of mankind in a following Nuclear Winter. The aim of our conference is therefore to demonstrate in the most powerful way, that there exists an immediately accessible alternative, a new paradigm, which can leave that mortal threat behind us and begin a new era of human history, in cohesion with the true nature of mankind as the only species known so far capable of reason.

That danger of that large war did not start on February 24th of this year. As my late husband Lyndon LaRouche forecast with prescience in August 1971—after Nixon replaced the fixed exchange rates of the Bretton Woods System with floating exchange rates—that a continuation of this monetarist policy, unless corrected, would lead inevitably to a new fascism and a new world war. And that is, 50 years later, exactly where we are right now. The acute danger of war, the larger war, comes from the fact that the trans-Atlantic neoliberal financial system was already at the advanced stage of breakdown of a hyperinflationary explosion of a hopelessly bankrupt system, before the war in Ukraine started.

In order to understand the real reasons for the Ukraine crisis one has to go back to the reasons why the great historic chance which existed after the disintegration of the Soviet Union, for the establishment of a true peace order, as we proposed with the program of the Eurasian Land-Bridge then, was missed. A good entry point, a window to get an insight, is a document that was originally leaked to the New York Times by a whistleblower in March 1992 which became known as the Wolfowitz Doctrine, which was written in the spirit of the earlier Project for a New American Century. It stated that part of the American mission would be to ensure its role as the only superpower in the post-Soviet world which would have sufficient military might to deter any nation or group of nations from challenging America’s primacy. On March 8, 1992 the New York Times wrote:

[T]he Pentagon documents are the clearest rejection to date of collective internationalism, the strategy that emerged from World War II when the five victorious powers sought to form a United Nations that could mediate disputes and police outbreaks of violence.

The Wolfowitz Doctrine was the real reason why the promise given to Gorbachev that NATO would not expand “one inch to the East” by Secretary of State James Baker III, at three different occasions in February 1990, was not kept. The Wolfowitz Doctrine, based on the Anglo-American special relationship, was the basic axiom for a whole array of policies to follow, starting with the so-called “shock therapy” of the IMF-backed liberal reforms in Russia in the ’90s, which in light of the wealth of raw materials and scientific expertise of Russia, was aimed explicitly to eliminate a potential future competitor on the world market, and which reduced the industrial capacity of Russia from 1991-1994 to only 30%.

It was the basis for the various interventionist wars in Iraq, the bombing against Yugoslavia, wars against Afghanistan, Libya, Syria, as well the five NATO expansions to the East. Putin’s speech at the Munich Security Conference in 2007, was a dramatic protest against the enactment of the unipolar world, which remained essentially as unanswered as the various definitions of “red lines” concerning the core security interests of Russia, up to the recent one to the United States and NATO on December 17, articulated by Putin.

The conflict between the claim to maintain essentially an unipolar world and the emergence of a multipolar world—which was the natural result of the economic rise of China, the attraction of the BRI [Belt and Road Initiative—ed.] for over a hundred countries, the strategic partnership between Russia and China, and more recently, the refusal of many countries, such as India, Pakistan, Brazil, South Africa, and others to be drawn into the geopolitical confrontation between the West and Russia and China—that conflict is at the core of the present danger.

It is terrible that we have a war in the middle of Europe, but so were the wars in Iraq, Afghanistan, Libya, Syria, Yemen, etc. But they almost did not exist in the news. But did anybody think the Russian military could have come to another conclusion, when they saw the pounding of ever harsher sanctions, the acting out of various RAND think-tank scenarios and chorus of western politicians about “crushing” the Russian economy, “crushing” Putin, “crushing” the Russian system—the largest nuclear power on the planet?

And now, after the negotiations between Russian and Ukrainian delegations in Turkey had reached a first hopeful step, pictures of the atrocities of war, without even a minute of presumption of innocence until proven guilty in respect to the authorship, serve to apply further sanctions, an expulsion of diplomats, and the open threat of bankrupting Russia.

The policy is openly aimed at regime change, in an effort to make not only Putin but also all of Russia a pariah among nations for the indefinite future, exclude her from the UN Security Council, even the UN and the G20, which will destroy these institutions. It will cause the complete political and economic decoupling between the West, and Russia and China. This policy already has and is doing devastating damage to the physical economy worldwide—the so-called supply chains—and it is catapulting the potential victims of a world famine to one billion people; that is one eighth of the entire human species! There are already hunger protests in many countries in the Middle East, Africa, Latin America! Meanwhile the inflation in prices for food, energy, raw materials threatens to halve the industrial production in many countries, mass unemployment looms and a total collapse into chaos.

A New System is Emerging

A new system is already emerging, centered on China and the BRI, Russia, India, and others. There are many new strategic alignments occurring: the SCO, the BRICS, the OIC-China relations, the many relations among the Global South.

But even the conception of a multipolar world does not solve the problem, because it still implies the danger of a geopolitical confrontation. We need a dramatic, sudden change in the way we organize our affairs. It has to start with an honest explicit insight, that a continuation of the present policies risks a conflict where there would be no winner, and therefore a new peace conference is needed in the tradition of the Peace of Westphalia.

The recognition that the only option left was to have peace negotiations, dawned on the warrior parties after 150 years of religious war in Europe, of which the Thirty Years War was only the culmination, since they realized, that nobody would be left alive to enjoy the victory if the war would continue. Today, in a nuclear war many cities would be dead within hours, and the rest of humanity would suffer, ailing in a nuclear-contaminated world, until either all life ends, or the few unhappy survivors would contemplate why mankind was not able to prevent its own destruction.

Therefore there must be the immediate convening of an emergency conference in the spirit of the Peace of Westphalia, where “For the sake of peace all crimes committed by one side or the other must be forgiven and forgotten,” and “For the sake of Peace, all policy must take into account the interest of the other.”

There must be the intention to create a new international security and development architecture, which takes into account the security interest of every single country on the planet. There must be an immediate ceasefire. And a new credit system must be created to replace the bankrupt financial system, as the real cause for the war danger. It must be based on the principles of the original Bretton Woods System as it was intended by FDR, but due to his early death, never was implemented.

These principles which Lyndon LaRouche outlined in a “Draft Memorandum of Agreement Between the United States and the USSR,” published March 30, 1984 after the Soviet Union had rejected the offer by President Reagan to cooperate in making nuclear weapons obsolete by technological means, are still absolutely valid today.

In this “Draft Memorandum of Agreement,” it says:

Article 1. General Conditions for Peace. The political foundation for durable peace must be: a) The unconditional sovereignty of each and all nation-states; and b) Cooperation among sovereign nation-states to the effect of promoting unlimited opportunities to participate in the benefits of technological progress, to the mutual benefit of each and all.

The most crucial feature of the present implementation of such a policy of durable peace is a profound change in the monetary, economic, and political relations between the dominant powers and those relatively subordinated nations often classed as “developing nations.” Unless the inequities lingering in the aftermath of modern colonialism are progressively remedied, there can be no durable peace on this planet.

Insofar as the United States and the Soviet Union—today, the Russian Federation—and the People’s Republic of China—acknowledge the progress of the productive powers of labor throughout the planet to be in the vital strategic interest of each and all, these powers are bound to that degree, in that way, by a common interest. This is the kernel of the political and economic policies of practice indispensable to the fostering of durable peace between these powers.

The commitment to engage in a global poverty eradication program, such as it is outlined for example in the report by the Schiller Institute, The New Silk Road Becomes the World Land-Bridge; or the proposals of China for a cooperation between the Belt and Road Initiative, the Build Back Better program of the United States, and the Global Gateway program of the EU, can become the actual development underpinning for such a global security architecture.

Ukraine, rather than being cannon fodder in a geopolitical confrontation, can be the bridge between Europe and the other Eurasian nations.

In light of the present, and the danger of future, pandemics there must be the construction of a modern health system in every country. In light of the famine threatening the lives of one billion people and the expected population growth, governments must take emergency actions to double world food production to ensure a healthy diet for all human beings.

International law, as it developed out of the Peace of Westphalia and was established in the UN Charter, must be reinstituted without any limitations. The Five Principles of Peaceful Coexistence must be the guidelines for the cooperation among all nations.

It is an expression of the richness of our human civilization that it has generated different cultures. We must advance the dialogue of the best traditions of these cultures, the most beautiful creations in science and art, as the demonstration of the unique creativity of man, and in that way create a new renaissance, which will start a new era of mankind.

We will replace hatred and prejudice against other cultures, which only exists if we don’t know them, with a tender love for all of humanity, because it is the most precious good in the known universe.