This article appears in the May 6, 2022 issue of Executive Intelligence Review.

Faced with a Looming Nuclear War with Russia,
Has Germany’s Bundestag Lost Its Mind?

The following article was written for the German weekly newspaper Neue Solidarität and has been translated from the German original (solidaritaet. com/neuesol/2022/18/hzl.htm). It is being circulated internationally. 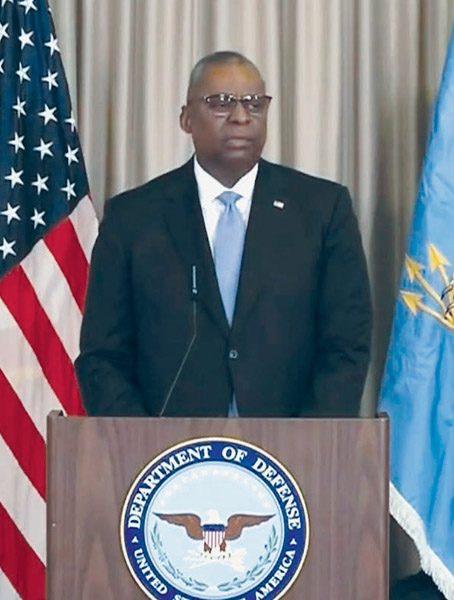 April 30—The irresponsible and highly dangerous decision of the German government and Bundestag to give in to the pressure from the U.S. government, NATO, and the warmongers in their own ranks, and agree to deliver heavy weapons to Ukraine, must immediately be reversed! It represents an acute danger for the existence of Germany, as it makes us—together with the United States, Great Britain and other NATO member states that are also providing a vast arsenal of weapons to Ukraine and training Ukrainian troops in their own countries or, according to Le Figaro journalist, Georges Malbrunot, even inside Ukraine—a party to the war. It is also a big step in a spiraling escalation toward a nuclear Third World War! Instead, Germany and France must push, with great force, for an immediate cease-fire and a diplomatic solution.

The Biden Administration is trying to mask its participation in the proxy war against Russia, with repeated statements by President Joe Biden that the military option in Ukraine is not on the table, because no one wants to trigger World War III. But given the massive arms shipments, the various aid amounting to $14 billion in the past two months, and now another $33 billion on top of that, and given the sharing of intelligence with the Ukrainian armed forces, as is openly admitted by the White House Press Secretary Jen Psaki, the United States is already de facto a participant in the war.

Bruce Fein, an American constitutional law expert and former Associate Attorney General in the Reagan administration, argues that the U.S. and NATO member countries are already co-belligerents in the war. John B. Henry, the Chairman of the Committee for the Republic, which includes well-known former diplomats and members of government, is of the view that, under international law, this gives Russian President Vladimir Putin the right to take military action against the U.S. and those countries.

After Chancellor Olaf Scholz had refused on April 22 to deliver heavy weapons to Ukraine, because he wanted to do everything possible to avoid an escalation that could lead to World War III, just three days later, his intention had evaporated. German Defense Minister Christine Lambrecht announced just in time for the major meeting at the U.S. air base in Ramstein on April 26, to which U.S. Defense Secretary Lloyd Austin had invited military leaders from 40 countries, that the government coalition had decided the day before to supply Gepard anti-aircraft tanks to Ukraine. So much for statements by the Chancellor or for Germany’s sovereignty—they are obviously meaningless.

Secretary Austin announced that from now on, such meetings would be held once a month at Ramstein Air Base, which houses the headquarters of the “United States Air Forces Europe” and “Air Forces Africa,” the NATO “Allied Air Command Ramstein,” as well as the “U.S. Air and Space Operations Center,” which controls drone strikes in the Middle East and Africa. The purpose of such meetings will be to optimize and coordinate the weapons production by arms industries in the various countries. Interestingly, the largest and most modern American military hospital outside the U.S., which is largely financed by Germany, is also located there. Obviously, decisions of greater import are taken in Ramstein than in Berlin, including as to whether or not Germany will be a party to the war in Ukraine.

So far, NATO and Western governments have turned a deaf ear to Putin’s warnings about crossing red lines, although he has repeatedly shown that his words are followed by deeds. This time, we should heed the warnings. In a meeting with lawmakers in St. Petersburg on April 27, one day after Lambrecht’s announcement, he said that in the event of outside intervention and the creation of an unacceptable threat to Russia, retaliatory strikes will be lightning-fast. Russia, he added, has the tools for that purpose that no one else has at this point, and they will be used. All the decisions, he said, have already been made.

On the same day, April 27, The Wall Street Journal carried an article titled “The U.S. Should Show It Can Win a Nuclear War,” in which former Undersecretary of the Navy, Seth Cropsey, maintained that the U.S. should prepare to win a nuclear war if it did not want to lose it. U.S. warships should be armed with nuclear weapons, he wrote, and destroy Russian nuclear-missile submarines that are the main basis of Russian second-strike capability. A similarly insane fantasy underlay the U.S. “Global Lightning” exercise, held in late January, which practiced an extended maneuver involving a hybrid of conventional and nuclear methods of warfare.

The idea that a limited nuclear war is possible and that it could be “won,” and that small nuclear weapons that are “usable” should be deployed, is madness. Nuclear arms expert Ted Postol has made an absolutely compelling case, most recently in a dialogue with Robert Scheer, on why the use of even a single nuclear weapon will inevitably lead to a general nuclear war, leading to the use of all existing nuclear weapons. And all the political morons who lightly talk about the need to deliver heavy weapons to Ukraine, even if it means the risk of nuclear war cannot be ruled out, belong in a locked hospital ward, not in positions of political responsibility.

Human beings can’t imagine the scale of such heat, he explains. He himself has written articles repeatedly about the consequences of nuclear weapons on cities, for example. Postol said, “This is something beyond anything that human beings have been able to imagine. And I don’t know how to emphasize how dangerous this is.”

He further describes that a single nuclear weapon would wipe out an urban area with a radius of 5 miles, or an area of about 75 square miles, that it would take only 20% of the American ICBMs available “to destroy all of Russia’s ICBM, land-based ICBMs—maybe a thousand,” and thus 80% of the warheads could be used for other purposes (for example against targets in Russia, China or Germany). Russia, he goes on, because of its less capable early warning system, had to set up an automated response in the event the Russian leadership were killed in a surprise U.S. nuclear first strike. Russia’s unfortunate inability to improve its early warning system, according to Postol, has resulted in a “doomsday weapon” that makes the situation much more dangerous because a fatal error could trigger a nuclear war.

It should be clear to every thinking person—and the 586 members of the Bundestag who voted for the delivery of heavy weapons to Ukraine are obviously not among them—that the Federal Republic of Germany becomes a co-belligerent because of that, and thus becomes a target in the event of war. Ramstein, Stuttgart, Wiesbaden, Büchel, Pirmasens, Baumholder, to name just a few targets, would burn up.

Rather than pursuing a course of suicide and the end of humanity in a misconceived loyalty to the alliance, Germany must work for an immediate ceasefire and diplomatic negotiations. Rather than letting ourselves be whipped up into a hatred of Russia (and China) by commissioned, war-mongering journalists and gun-toting women, we need to start doing our own thinking again. It is not the policy of détente that has led to the current crisis—it allowed for the peaceful reunification of Germany after all—it is the expansion of NATO five times to the East and the obstinate refusal of the political and military establishment to respond to Putin’s demand for legally binding security guarantees.

We are indeed living through a turning point, but not in the way the “narratives” of mainstream politicians and media would have us believe. Rather, the attempt to maintain a unipolar world in which only the U.S. and UK are in charge, has failed. The majority of nations in the world are in the process of building a world order based on the Five Principles of Peaceful Coexistence and enabling the economic development of all.

Germany will remain non-sovereign and an occupied country only as long as we allow it to be so in our minds. We must work now for real peace, for a diplomatic solution, and beyond that for a new international security and development architecture that guarantees the survival of humanity. Become active with us to make that happen!

Add your name to the petition to Convoke an International Conference to Establish A New Security and Development Architecture for All Nations, here.

Watch, and circulate the April 9, four-panel international conference, a crucial initiating step in bringing that new architecture into being, here.