This transcript appears in the September 23, 2022 issue of Executive Intelligence Review.

The Opening of the ‘LaRouche Library’—
A Revolutionary Intervention

This is the edited transcript of Helga Zepp-LaRouche’s Keynote address to Panel 3, Sept. 11, 2022, of the Schiller Institute’s Sept. 10-11 Conference, “Inspiring Humanity To Survive the Greatest Crisis in World History.” Mrs. LaRouche is the founding director of the LaRouche Legacy Foundation. The full video of Panel 3 is available here. 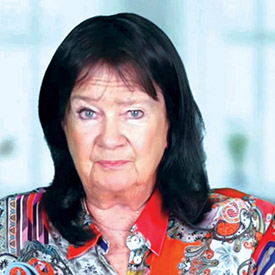 Hello, good day! I’m extremely proud and happy to have the fantastic task to announce to you, the participants of this conference commemorating the 100th birthday of Lyndon LaRouche, my late husband, and the world, the opening of the digital library of his work, both in written, audio, and video forms. This means that from now on, students and scholars, as well as ordinary citizens, will have access to his enormous production of ideas.

This is absolutely revolutionary, because the international oligarchy has run a huge concerted international operation to suppress not only his writings, but even his existence. Maybe only historians will find out one day how that was the most elaborate operation to suppress the ideas of an individual ever. So now, in every country around the globe, people will be able to access, eventually—and I disagree with Dennis Small in terms of the number of books; I think it will be hundreds of books, thousands of articles, numerous recorded speeches and lectures. What will you find when you do that? Well, many people who knew him personally have stated repeatedly that he was the most educated, most knowledgeable person they ever met.

I had the fortune of travelling together with him to many countries—probably around 40 countries—and what always struck me, and naturally also other people, was that he was able to talk with the most diverse groups of people: Be they scientists in Russia, fishermen in Peru, shoemakers in Italy, military men in France, political leaders from Africa, philologists in India, musicians from many countries, historians from Europe, engineers and farmers from the United States, industrialists from Germany—and the list could go on for a very long time. He would always leave his interlocutors with the impression that he was an expert in their field, knowing more about the matter than they themselves.

Just to give you one example. After he spent two full days of discussion about the principles of Classical music, musical composition, Motivführung, and the art of understanding the intention of the composer, with no one other than the very, very top world artist Norbert Brainin—the first violinist of the famous Amadeus Quartet and decades-long friend of his—Norbert concluded that Lyn knew more about music than he! And that means a lot, because Norbert Brainin was a genius in his own field.

Despite his universal knowledge, there was not one iota of arrogance or ego in Lyn. He lived so much in the heights of ideas that he was able to evoke in his discussion partners a creative spark, a self-subsisting impulse to think with greater clarity, so that the person he was speaking with always would feel self-elevated, motivated to explore new areas of knowledge and different viewpoints. In this way, he touched the lives of a very large number of people in his long and extremely productive life.

He was truly a universal thinker, proving that, despite the complexities of our times, it is absolutely possible to know the essential fields of knowledge, and that the compartmentalization of experts was not the fate of somebody who mastered the method of acquiring knowledge, rather than being a Brotgelehrter—somebody who only works for his money. He was truly a philosophical mind in the way Friedrich Schiller talks about in his essay, “Why Do We Study Universal History.”

Lyndon LaRouche was primarily an economist. Readers of the digital library will be able to find an unparalleled account of both the evolution of the science of physical economy, from the ancient roots in astronomy, geometry, city building, infrastructure building, etc., as well as the foundations of physical economy in Leibniz, Hamilton, List, Carey, Witte, and related scientists, such as Gauss, Riemann, Vernadsky, and Einstein. As well as the theoreticians of the opposite, oligarchical school of slave-holding societies and empires, such as the different schools of the Physiocrats, monetarists, and proponents of the free trade doctrine.

He revived the almost forgotten knowledge about the fundamental difference between the American and the British systems of economy. If any student wants to learn how to build a successful economy for his or her country, LaRouche has provided the historical examples, as well as the theoretical building blocks, to do so.

Given the obvious crisis of economic science, in which none of the established schools—from the Austrian school to the Chicago one, from the Keynesians to the Friedmanites—have been even approximately able to have a correct prognosis about the economy, the study of LaRouchean economics is a must for anybody who wants to avoid the bungling of a Paul Volcker or a Robert Habeck. Just think of the many economists who wrote shortly before the systemic crisis of 2007-8, that from now on, the boom would go on forever and everybody could become a millionaire by making the right investments in the stock market.

Also, the student of universal history will find an unmistakable guideline to study the evolution of the oligarchical system, which he described, for example, as a “slime mold,” which over the centuries may change color and shape, but which essentially always remains in the same character, being a slime mold: Namely, a system where a small oligarchical elite tries to keep all the privileges for themselves, and whose basic interest is to keep the population as backward as possible.

This system was the dominant form in much of the world until the 15th century, when the emergence of the sovereign nation-state, for the first time, produced the idea of the common good as the purpose of the state. Since then, these two orientations—the oligarchical versus the nation-state—have been in a continuous battle, still waiting to be decided.

The writings of LaRouche provide a pathway from the early forms of civilization to the essential battles of especially European history of the last two and a half thousand years. Based on his profound knowledge of history as essentially a battle of opposing ideas, LaRouche was able in an amazing way to conceptualize any new historical occurrence. When others were puzzled by sudden changes in the strategic or political situation, he was able to place this event and give it a proper name. The reason for his capability had, again, to do with his method of thinking, which had to do with his total mastery of the universe of Platonic ideas and all major thinkers who followed in that tradition, such as Augustinus, the controversies among the neo-Platonists, Nicholas of Cusa, Kepler, Leibniz, et al. As well as his understanding of the complex domain, and the thinking in terms of analysis situs, a notion coming from the geometric considerations of Leibniz.

A whole other area of different strategic proposals and policy outlines, which even if they were made for specific historic situations, still contain valid principles which are applicable today. One such example is the Strategic Defense Initiative, which—even though it was designed as a solution to the middle-range missile crisis between NATO and the Warsaw Pact in the beginning of the 1980s for the Reagan Presidency and the Soviet government at that time—still remains the most elaborated proposal to establish a new international security and development architecture to replace the curse of geopolitics, until the present day. It contains the essential idea that the only realistic form of disarmament is the agreement to make nuclear and other weapons of mass destruction technologically obsolete, and to enter a form of cooperation which both takes into account the interest of the other, as well as granting more benefit to all sides, than to maintain the adversarial position.

It will be surprising for many to see that LaRouche’s familiarity with the most profound principles of poetry, drama, and music are as deep as his knowledge of universal principles in the sciences. And it is only from that standpoint that he was able to overcome, methodologically, the artificial division between Naturwissenschaften [cognitive practice of physical science] and Geisteswissenschaften [art and moral law] which had developed in Europe since the times of Savigny and Kant.

The continuous interest of LaRouche, however, was with the issue of creativity per se, as that specific capacity which separates the human species from all other living forms of existence. He was, therefore, most concerned about all aspects and processes which further the creativity of the human mind, and equally about those which lower that capacity, as something which had to be overcome. So, if the student wants to find the key to his own creativity, there is no better way than to study LaRouche, who was convinced that every human being has the potential to become a genius, even if that may take many different forms, since in the realm of creativity the degrees of freedom are limitless.

I have to issue a warning at this point. When I once asked Lyn, how it came to be that he had become such an all-round genius, covering so many areas of knowledge, making so many fundamental breakthroughs in so many fields, he had a very sobering answer. He said, “It’s a lot of work.”