A New Credit System for the Coming Scientific Revolution

The following is an edited transcript of Helga Zepp-LaRouche’s speech to the Oct. 25-26, 2022, meeting in Moscow hosted by the National Committee on BRICS Research, Russia, and titled, “International Scientific and Practical Conference: ‘Scientific-Technological and Innovative Cooperation of BRICS countries’.” The BRICS nations are Brazil, Russia, India, China, and South Africa. Mrs. Zepp-LaRouche is the founder of the Schiller Institute.

The video of her presentation is available here.

My wholehearted thanks to the National Committee on BRICS Research for the invitation to this indispensable conference!

I will start with a quote from Sir Peter Westmacott, a former British Ambassador to the United States (2012-2016), who just complained that

[The United Kingdom has become] a source of amusement, disbelief, pity, and schadenfreude abroad. It’s humiliating for a country which has for so long been a model of functioning democracy.

Leaving aside a comment about the UK as a “functioning democracy,” it has a certain usefulness to look at the panicky roller coaster of the Bank of England, switching from QE [quantitative easing—expanding its balance sheet] to QT [quantitative tightening—reducing its balance sheet], only to bounce back to QE with a speed resembling that of Liz Truss rushing into 10 Downing Street and out again. While some people may experience schadenfreude about the demise of Great Britain, a more clinical view is appropriate, since it is the systemic failure of the neoliberal system which is the real dynamic behind the Anglo-Saxon geopolitical confrontation against Russia and China. 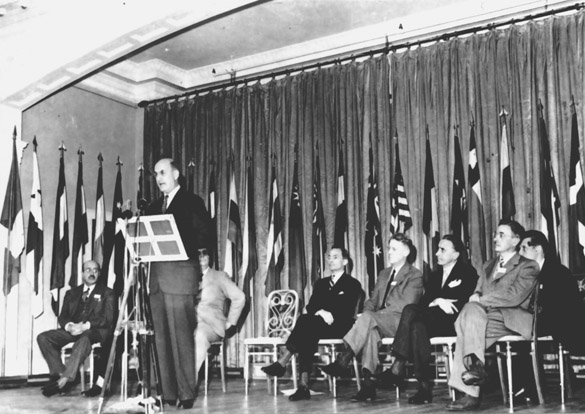 The Mount Washington Hotel & Resort
The Bretton Woods system never realized President Roosevelt’s determination to create a credit system that would end colonialism. But it is a useful reference to remind us that financial systems are not God-given, but designed by governments. Here, the system’s founding meeting in Bretton Woods, New Hampshire, USA.

While the British Establishment is tearing its hair out about these questions—what these signs of ungovernability will do to the British support for NATO’s war in Ukraine, or the Special Relationship with the U.S.—the turmoil in the UK points to a larger significance of these developments for the BRICS and the rest of the world.

Events in London signal the definite arrival of the global systemic crisis, of which my late husband, Lyndon LaRouche, warned 51 years ago when President Richard Nixon replaced the fixed exchange rates of the Bretton Woods System with floating ones. LaRouche warned at the time that a continuation of that monetarist system, oriented towards the maximization of profits for the speculators, would necessarily lead to a new depression, a new fascism, and the danger of a new World War—or, a completely new world economic system.

While the process of de-dollarization is already going on—with more and more trade among BRICS and some countries of the Global South occurring in their national currencies, as well as preparations going on to establish a new international currency based on a basket of commodities—these countries are not cushioned sufficiently from the spillover effects of either a hyperinflationary blowout of the trans-Atlantic financial system as a result of continued QE, or a chain reaction collapse of bankruptcies as a result of an effort to curb the inflation with QT.

Preparations for a New Credit System

A representative group of governments, such as the BRICS, the SCO [Shanghai Cooperation Organization] and others, acting in the interest of the majority of the human population, must rapidly prepare to set up a new credit system which shields the countries of the developing sector against the effects of a chaotic disintegration of the hitherto dominating financial system of the Western central banks. Another strong motivation arises out of the undisguised and obviously completely unworkable intention of leading circles in the U.S., the UK, and the EU to completely decouple from Russia and China, and therefore by implication [from] all the countries working with the BRI [Belt and Road Initiative].

Despite the fact that the old Bretton Woods system is understandably rejected by the developing countries, because it was set up under the tutelage of imperial thinking of Churchill and Truman and never even nearly realized the determination by President Roosevelt to create a credit system which would end colonialism and predominantly increase the living standard of the people living in the so-called Third World, it is a useful reference in so far as to remind people that financial systems are not a God-given phenomenon, but can be designed by governments.

As Lyndon LaRouche insisted consistently, a new credit system must absolutely include 1) a fixed exchange-rate system of national currencies, which can be periodically adjusted; 2) a cooperating system of national banks based on the sovereign powers of government; 3) limited convertibility of the currencies; 4) capital controls, which have basically the same effect as an international Glass-Steagall banking separation; 5) protective tariff and trade regulations, which guard especially the nascent economies of the developing countries; and 6) prohibiting any forms of speculation.

Efforts To ‘Ruin Russia’ and ‘Stop China’ Are Failing

The unprecedented scope of sanctions against Russia, which have had the explicit aim to “ruin Russia”—denying Russia access to all modern advanced technologies, preventing the diversification from exporting oil and gas, as was stated in a background press call Jan. 25 by unnamed White House officials—have clearly failed, and now, as blowback, are about to ruin the economies of Europe, but especially Germany.

There is now a similar attempt to deny China access to the chip and semiconductor technologies. The effect of the hyperinflationary explosion of food and energy prices on the developing countries is threatening a world-historic tragedy of unparalleled dimensions. All of these factors contribute to the fact that the present industrial capacities of both the “West,” as well as the BRICS plus Global South, are way below what would be needed to maintain the present world population.

If the BRICS countries and their partners want to remedy this condition, the only reliable and non-inflationary option is to mobilize all available resources of that group of nations for a coordinated “science-driver” program. It is decisive to prioritize those new scientific breakthroughs which are based on tendentially higher energy-flux-densities that allow therefore higher relative potential population densities, a correlation which is one of most crucial aspects of the science of physical economy that differentiates it completely from monetarism. This need to take the increase of potential relative population density as a yardstick for the value of an investment, pertains to the long-term survivability of the human species.

Given the fact that Russia, China, and India are among the leading spacefaring nations, science-driver space programs are among the most promising fields, where the spillover effect of new revolutionary technologies into other areas of the economy promises the highest increase in the productivity of the productive process at large at the greatest possible rate. The same applies in principle for other avant-garde technologies, such as thermonuclear fusion, biophysics and biochemistry, cognitive sciences, etc. The significant scientific traditions and capacities in nuclear and nuclear-related science of Russia, China, India, and South Africa are already available and can be the science-driver basis for a growing “knowledge export” sector for major technology transfer and training programs to other nations of the Global South, allowing them to leapfrog to significantly higher levels of productivity. 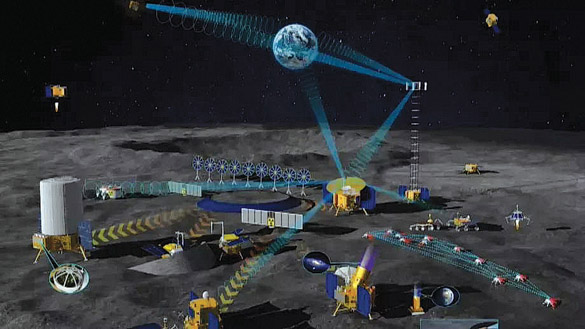 Roscosmos/CNSA
An artist’s depiction of Phase 3 of the China-Russia International Lunar Research Station (ILRS) being developed by Roscosmos and the China National Space Administration. The ILRS is a wonderful example of what can be done when nations cooperate to advance science and technology. The project is open to participation by all interested countries and international partners.

While there must be an effort made to employ all human and workplace capabilities available, and increase their level of technological performance to the highest possible level, low-cost credit and investment tax-credit assistance must be provided for each “spillover” resulting out of the science-driver programs, which then permit solving crucial problems of the economy.

The transfer of the scientific advances into potentially all sectors of the economy occurs essentially through two channels, the education systems and the machine-tool sector, and from there into the producer goods, household goods, infrastructure development, and the agricultural sector.

This presently onrushing systemic collapse of the financial system represents obviously a grave challenge, but it also means a welcomed chance to finally put the better part of the world economy on principles in accordance with those of our physical universe.