The Existence of Humanity Itself Is at Stake

This is the edited transcript of Helga Zepp-LaRouche’s presentation to the Schiller Institute’s Oct. 27, 2022, International Seminar, “For World Peace: Stop the Danger of Nuclear War,” the second seminar of current and former elected officials of the world. Mrs. Zepp-LaRouche is an expert on Friedrich Schiller as well as Nicholas of Cusa, the great European Renaissance philosopher. She is the founder of the Schiller Institute, and the Committee for the Coincidence of Opposites. She is the widow and closest political collaborator of Lyndon LaRouche, with whom she visited over 40 countries to develop a policy solution to the policy of disintegration and war. She spoke in English from Germany. The video of her presentation is available here. 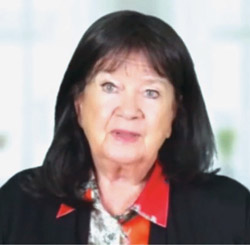 Hello! I greet you wherever you may be. What brings this meeting together, which is actually a sequel to the meeting we had on October 7th where, to the distinguished Congressmen and women from Latin America, it was clear to us that we had to do an extra effort to mobilize the world population to the danger in which we are. I think that one of the most disturbing facts about the present situation is that for those who have looked at the danger of nuclear war and the escalation of that danger, is that the vast majority of human beings on this planet have no inkling of what kind of a powder keg we are sitting on.

If you think back to the early 1980s, when we had the medium-range missile crisis in Europe, between the SS-20 and the Pershing II being directed against each other with only a few minutes’ warning time, you had hundreds of thousands of people in the street warning of World War III. And today, when the situation is so much more dangerous, there is very little. There are some demonstrations, but not in any correspondence to the possibility of the extinction of the civilization, which is what we are talking about if only one nuclear weapon were to be used.

Today, October 27, continuing until October 30—for another three days—simultaneously the entire NATO and the entire Russian armed forces are involved in annual nuclear exercises. That means the arsenals of the two largest nuclear powers are right now rehearsing a nuclear war. Because that is the basis of NATO’s Steadfast Noon maneuver, which rehearses the readiness of its nuclear arsenal. Given the fact that the main target is Russia, they are rehearsing a nuclear war against Russia. That means that the entire arsenal of B-52 bombers has been brought from the United States to the European theater. At the same time, the Russians are also having their regular maneuvers called “Grom,” which is the Russian word for thunder. They are also involved in a large maneuver, including live missile launches.

Given the tension, these are not just routine maneuvers, even though both sides have stated that this is routine. But this is in the middle of a situation in the Ukraine war which is getting more dangerous by the day. Just a few days ago, Russian Defense Minister Sergei Shoigu called all his colleagues—the defense ministers of the U.S., UK, France, and Turkey—warning them that Russia had intelligence about Ukraine preparing to use a dirty nuclear bomb, which would then be blamed on Russia. Naturally, this was denied by the Ukrainian side. Yesterday Shoigu continued his series of phone calls by calling the Indian and Chinese defense ministers, to further discuss this situation.

Now, only a very short time ago, President Volodymyr Zelensky of Ukraine, in a meeting with the Australians, called for the preemptive use of nuclear weapons against Russia, which statement was then pulled back. His aides said he didn’t mean it that way. Jens Stoltenberg, NATO’s Secretary General, said that a Russian victory in Ukraine would be a defeat of NATO, and therefore could not be tolerated.

All of this must take into consideration of each side’s nuclear doctrine. It is an absolute fact that the Russian nuclear military doctrine provides for the use of nuclear weapons only in the case that the territorial existence of Russia is at stake. That obviously is not the case under normal circumstances. While on the other side, since the George W. Bush administration, the United State has had a first strike doctrine. That is something which is absolutely not discussed, and I think we have to discuss it because ever since the U.S. has had the prompt global strike doctrine, the element of a first strike use has been there.

When President Biden came into office in January 20, 2021, he promised that he would clarify that, and correct the U.S. doctrine to being nuclear weapon use only in order to deter a nuclear attack, or if necessary, retaliate against a nuclear attack. So, I think we need to have a very broad discussion among military experts. Is it acceptable to be part of NATO when the policy of NATO is a first strike policy? That is not some theoretical question very far away. We should note that in February 2021, the commander of the U.S. Strategic Command, Admiral Charles A. Richard, advised the Pentagon to change the likelihood of the use of nuclear weapons from “not likely” to “likely.” So, that was the response.

Just last week, the U.S. ballistic missile submarine, USS West Virginia surfaced in the Arabian Sea. The Russian expert Alexander Timokhin, wrote in the magazine Vzglyad [The View], about the normally very unlikely occurrence of a submarine surfacing—normally these submarines don’t want to be seen and their locations are supposed to be secret—was, most probably, a demonstration on the side of the United States that they are capable of delivering a first strike to disarm the Russian nuclear arsenals in a preemptive way, thus preventing Russian retaliation, by putting such missiles on a flat trajectory rather than a ballistic one, and therefore shortening the flight time significantly, thereby depriving the Russian side of a counterstrike.

A Public Debate Is Urgently Required

This all is very worrisome, and I think we do need a public debate about that. We are truly that close to such mistrust and the assumption that this could happen. And the Russians have a doomsday strategy whereby if the Russian leadership were to be eliminated in a first strike, there would automatically be set into motion all nuclear attack capabilities, even though the Russian leadership had been eliminated.

I think all of these developments are really a reason to be in a total state of alarm. What is at stake is the existence of the human species. At the previous meeting on October 7, we discussed that were there a nuclear war—and all competent military experts agree that there is no such thing as a tactical nuclear war, that is, if one single nuclear weapon is used, the entire arsenal will be used—that will be the end of civilization, because a subsequent nuclear winter would kill off in all likelihood those few billion who survived the nuclear blasts. It would probably be the end of the human race, or at least in the form we know it now. If some miserable people managed to survive in the following years, one should remember the words of President John F. Kennedy, who said that those who die in the first hours will be lucky compared to those who manage to live on for a couple of weeks or months or years.

Therefore, because it is the existence of all of civilization which is at stake, we discussed that, by definition, every person on this planet is a world citizen, and has to think like a world citizen. We have been catapulted to be representative of the one humanity, whose existence is at stake right now. This is why we want to escalate this mobilization. We want to bring it into all countries, and we want to evoke from a group of nations, whatever it may be, that they must address this condition. We must have an emergency session of the UN General Assembly. Another occasion would be at the upcoming G-20 meeting in Indonesia in mid-November. But a group of nations has to come forward and offer an alternative to this danger.

Since the outbreak of this war, the Schiller Institute has mobilized for an international conference to have a New Paradigm, to have a new international security and development architecture that takes into account the interest of every single country on the planet. We have a European security architecture that clearly has failed. If you don’t include countries which right now are supposed to be completely excluded—there is actually an effort going on to decouple the United States and Europe and some of their few allies from Russia, China, the BRICS countries, the SCO—that will not work. You cannot split the world in two blocs and think that with all the problems we have that there can be a solution. We need a motion to put on the table for a new international security and development architecture, a new world economic order which addresses also the fact that the trans-Atlantic financial system is in a hyperinflationary blowout.

We have seen in the case of Great Britain and the unfortunate fate of the short-term Prime Minister Liz Truss, that the effort by the central banks—in that case, by the Bank of England—going first for quantitative easing, pumping money, then seeing that this leads to inflation; going to quantitative tightening; then realizing that that may lead to a collapse of the stock and bond markets, so going back to quantitative easing. This is not going to be a viable solution. Should the European Central Bank do the same thing in the next several days, they will have the same experience as the Bank of England had. We are at the end of the system, and we need a new monetary system, a new credit system which allows us to overcome poverty for every person on this planet. We need to have a new conception of how to organize the affairs so that every country on this planet can develop its fullest potential.

So, this is what we want to instigate a broad discussion about, and as our seminar moderator Dennis Small was saying, it was Schiller’s conviction that you can be a patriot of your country, and act as a world citizen at the same time, acting in the interest of all of humanity. We have reached in the history of mankind that point where survival requires the human species to make that evolutionary jump to think in terms of the one humanity first, putting national interest in harmony with the one humanity. It’s okay to have a national interest, but it should never be contrary to the interests of humanity as a whole. We are calling for a movement, for world citizens of all countries to unite, because that may be the last resort to stop something in which not even an historian would be left over to comment on. We want to invite all of you to participate and help to spread that effort. Thank you.