This article appears in the November 11, 2022 issue of Executive Intelligence Review.

Helga Zepp-LaRouche is the founder and leader of the Schiller Institute. She is also founder and chair of the BüSo, the Bürgerrechtsbewegung Solidarität (Civil Rights Movement Solidarity), a German political party. The following article will appear in the German newspaper, Neue Solidarität. It has been translated and is being published in EIR with permission. 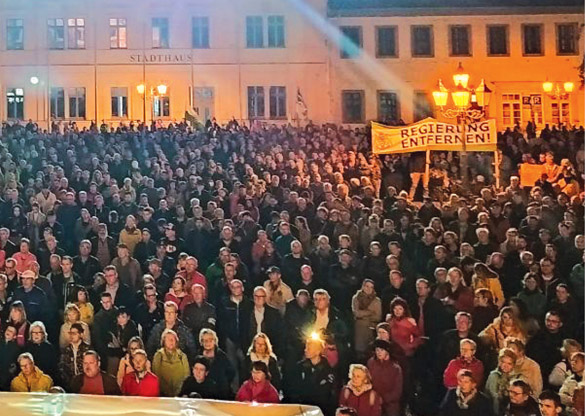 BüSo
A rally of 2,000 in Grimma, near Leipzig, Oct. 18, called for the resignation of the government. Some other demonstrations in Germany, notably in Berlin and Plauen, have made the same demand.

Nov. 5—Germany is in acute danger in two respects: We are now losing just about everything that we built up in the economy over the decades since the Second World War; and we face the grave danger of becoming the theater of war in a global nuclear conflict. Far from having a government that takes seriously its oath of office to protect the German people from harm, the ruling coalition includes at least two ministers who actively support these policies, which are clearly diametrically opposed to our country’s fundamental interests.

In the coming weeks and months, millions of people in Germany are threatened with poverty; hundreds of thousands of businesses will face bankruptcy. Vladimir Putin is not to blame for this, contrary to what the barrage in the mass media would have us believe. Rather it is the fact that Germany could become the country that suffers the greatest collateral damage from a geopolitical confrontation between the United States and United Kingdom on the one hand, and Russia and China on the other. Ukraine in all this is but a pawn that can be sacrificed.

In reality, China has achieved unprecedented economic growth in the last 40 years, with 850 million Chinese being freed from poverty—that is ten times more people than now live in Germany—and with the emergence of a well-to-do middle class of some 400 million, a figure which will soon hit 600 million and thus be twice as large as the entire American population. China’s rise was an inspiration for all of Asia and for the altogether 150 developing countries that are cooperating with China on the Belt and Road Initiative—not because China has imperial ambitions, but because, for the first time, they have the chance to break out of the legacy of colonialism, poverty, and underdevelopment.

In contrast, the “West” did not use the systemic crisis of 2008 to eliminate the underlying cause of it—the casino economy—but activated the printing press, and has since pumped many trillions into the system by quantitative easing (QE). This, together with other factors such as the boomerang effect of the sanctions against Russia, has led to hyperinflation.

In other words, the neoliberal system is hopelessly bankrupt, and that is precisely why the system of China and the Belt and Road Initiative, which is based on real economic growth, is considered a “systemic rival.”

Germany’s prosperity over recent decades has been based to a significant degree on cheap energy from Russia and a growing export market in China. If the complete break in relations with Russia were now followed by decoupling from China, as promoted by the United States, the UK, and their advocates in Germany, it would amount to the deindustrialization of the country. 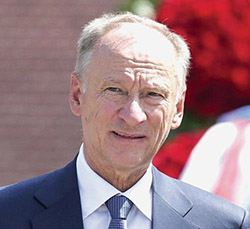 Duma.gov.ru
Nikolai Petrushev, Secretary of the Security Council of the Russian Federation.

Moreover, although one is hardly allowed now, on pain of imprisonment, to say that history did not begin on Feb. 24, it is not Putin who threatens to deploy nuclear weapons. Putin and the Russian government have merely confirmed Russia’s official nuclear doctrine, which provides for the use of nuclear weapons in the event that Russia’s territorial existence is threatened.

In contrast, according to the U.S. Arms Control Association, it is the Biden Administration that has not fulfilled President Joe Biden’s 2020 pledge to make clear that the sole purpose of nuclear weapons is to deter a nuclear attack on the United States or its allies. Instead, it reaffirmed the Obama Administration’s version of nuclear doctrine, which leaves it an open question whether nuclear weapons can be used not only in response to a nuclear attack, but also in response to non-nuclear threats.

As a result of this ambiguity, loose talk about first use of nuclear weapons has increased enormously, as by U.S. Senator Roger Wicker of Mississippi, or in an Oct. 27 article in the Council on Foreign Relations’ magazine Foreign Affairs by Thomas Mahnken. Under the headline, “Could America Win a New World War? What It Would Take to Defeat China and Russia,” Mahnken argues for massive rearmament to enable America to wage war simultaneously in Europe and the Pacific. 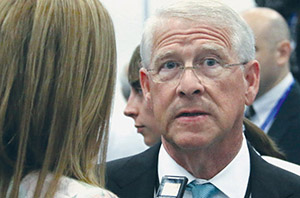 OSCE Parliamentary Assembly
An increase in loose talk about first use of nuclear weapons, as by U.S. Senator Roger Wicker, has lowered the threshold for using them.

On the same day, the Biden Administration released the National Defense Strategy, which for the first time includes the Nuclear Posture Review (NPR) and the Missile Defense Review. This doctrine represents a significant change in U.S. policy on the first use of nuclear weapons, and it deliberately leaves open the question of when the United States would use nuclear weapons preemptively, including in response to a non-nuclear threat. That significantly lowers the threshold for nuclear war, according to nuclear disarmament expert Scott Ritter.

One typical example of the media’s non-stop manipulation: The day after German Chancellor Scholz’s visit to Beijing, the Frankfurter Allgemeine Zeitung had a front-page lead with the headline: “Xi Opposes the Use of Nuclear Weapons” (as if this were news worth reporting) and then in smaller print: “Scholz in Beijing: Exert Influence on Russia”—thus, giving the impression that President Xi Jinping’s statement was directed against Russia at Scholz’s instigation.

The facts are that Russia has no doctrine for the preventive use of nuclear weapons; Xi certainly does not see Russia as a threat; and Scholz, because he rightly feared an escalation to World War III, still refused to send heavy weapons to Ukraine until he swore to a “turning point”.[fn_1] But up to now every news item in the media has been provided with the above “spin.”

Destruction of the Natural Gas Pipeline

In addition, the question remains of who sabotaged the Nord Stream pipelines. Remember that during Scholz’s visit to Washington in February, Biden emphatically stated that America had the ways and means to end these pipelines, a mantra repeated umpteen times by Victoria Nuland, now the U.S. Under Secretary of State for Political Affairs, and various U.S. Senators.

Now, the head of Russia’s National Security Council, Nikolai Patrushev, has pointed to British authorship of this act of sabotage, and said that the relevant evidence had been turned over to the UN Security Council. The British Ambassador to Moscow, Deborah Bronnert, was also summoned for the same purpose.

Similarly, the Russian government issued a statement laying out the role of the British military—with exact details on times and places—in training Ukrainian Navy personnel for the drone attack on the Russian Black Sea Fleet in Sevastopol, and stressing that such British actions signify an escalation that will lead to unpredictable and dangerous consequences. 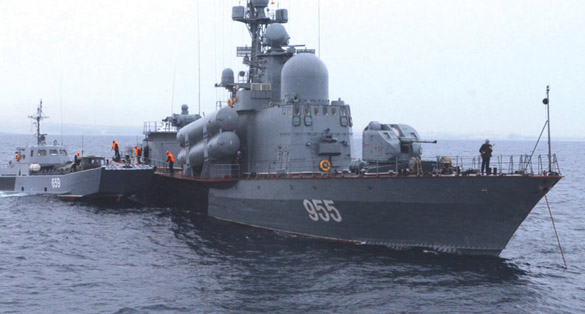 Russian Ministry of Defense
Russia has exposed the role of the British military in the Oct. 29 drone attack on its Black Sea Fleet in the Port of Sevastopol. Shown: A Project 1241 class missile corvette, part of Russia’s Black Sea Fleet.

So, where is the outcry in our “narrative-obedient” media? Where are the demands from politicians for an airtight clarification as to whether our British “allies” are responsible if the socially vulnerable citizens of Germany freeze and starve this Autumn and Winter? If the German economy is destroyed and we soon arrive at a point of no return in the war danger?

Instead of that, we are at the mercy of a German government in which at least two ministers, as well as U.S. Secretary of State Antony Blinken, regard this situation as a welcome opportunity to impose American liquefied natural gas on Germany, which is four times as expensive and will ruin consumers and businesses. But the Greens have always wanted to force people to reduce consumption by raising energy prices.

Real World Conflict Is Over Development

The current strategic confrontation is not one of “democracies” against “autocracies.” It is exclusively about the determination of America and the UK to assert their right to be the sole world power. To this end, they have launched a confrontation against Russia and China, in which Germany and all of Europe are in the gravest danger of being pulverized.

The real conflict is between the forces in the world that intend to maintain the worn-out concept of a unipolar, imperial, and colonialist world order, and the absolute majority of nations of this world determined to overcome colonialism forever and leave poverty and underdevelopment behind. These nations are in the process of building a completely new economic system with the BRICS [group of Brazil, Russia, India, China, South Africa], the SCO [Shanghai Cooperation Organization], the Eurasian Economic Union and other organizations of the Global South, which will enable survival and better living conditions for the people.

It is in Germany’s most fundamental interest to put an end to its economic suicide as vassals of a system that has no qualms about destroying our pipelines. Germans should rather orient themselves toward productive cooperation with the nations of the Global South, playing a positive role in their development, and thus securing a future for Germany. It is high time to recall that in 1990, Germans also won their sovereignty, with the peaceful reunification.

We are not experiencing a “turning point” in which militarism triumphs again in Germany, but the change of an era worldwide, in which the developing countries take up the tradition of the Non-Aligned Movement and implement a new, just world economic order, together with Russia and China. Therein lies the future of Germany.

[fn_1] Chancellor Olaf Scholz announced in a Feb. 27 statement that Russia’s Feb. 24 invasion of Ukraine was a “turning point” which justified his announcement of a huge, €100 billion increase in the German military budget, and the delivery of defensive weapons to Ukraine. [back to text for fn_1]