This article appears in the January 20, 2023 issue of Executive Intelligence Review.

Are Mrs. Merkel’s Lies Dragging Germany into War? Mobilize a Chorus for Peace! 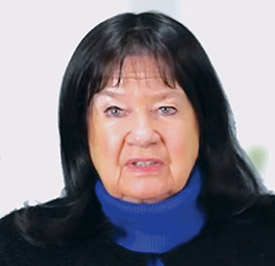 I am going to talk about the subject: How many seconds to midnight do we have on the nuclear war clock? The reason that I called for this conference is to bring the population in the German-speaking countries into an international mobilization for an immediate diplomatic solution to the war in Ukraine. What most citizens do not realize, and what is hidden from them by the mainstream mass media, is that we are in an existential danger, in which the fuse to a third world war, a thermonuclear war, is already burning, and thus the complete annihilation of mankind has become an acute possibility.

Even Der Spiegel, a magazine here in Germany which received its publisher’s license from the British, writes that with the decision of Chancellor [Olaf] Scholz to deliver 40 Marder tanks to Ukraine, he has made Germany party to the war. According to Deutschland radio, the German public radio station, people in Ukraine are pretty sure that the Leopard II main battle tank will follow in the short term. Andrij Melnyk, the Ukrainian Deputy Foreign Minister, is demanding warships, submarines, and missiles. And Defense Minister Oleksii Reznikov is also asking for more weapons from NATO. On TNS-TV in early January, he declared:

Today Ukraine is responding to this threat. We carry out NATO’s mission without shedding its blood. We are shedding our blood, so we expect them to give us the weapons to do so.

The next goal is to take back Crimea, which is an absolute red line for Russia, for which the former commander of U.S. forces in Europe, General Ben Hodges, wants to destroy the supply routes going there, such as the Kerch Strait Bridge, which connects Russia and Crimea, and the land routes via Mariupol. A spokesperson for the Ukrainian government is talking openly about plans to expel 800,000 Russian-speaking residents from Crimea.

So, we have reached a point of total confrontation. And due to a long chain of events, Russia is convinced that there is no one in the West worth negotiating with and that the decision will have to be made on the battlefield. NATO has insisted that Ukraine must win no matter what, even if the entire Ukrainian population is destroyed and the whole country is razed to the ground. The Ukrainian Ambassador in London, Vadym Prystaiko, said so quite openly to Newsweek. He said:

We’ve been in the war for almost a year now. We’re losing people left and right. We’re not advertising how many of those lost are military or civilians, but you can imagine that numbers are huge, indigestible. And the cities, some of them are totally destroyed.

…. The West now has a unique chance. There are not many nations in the world who would allow themselves to sacrifice so many lives, territories, and decades of development for the purpose of defeating the archenemy.

With these two positions: a decision on the battlefield, and instrumentalizing Ukraine to “ruin” Russia, as is being said by Germany’s Foreign Minister Annalena Baerbock, the imminent nuclear catastrophe is pre-programmed. If what Dmitry Medvedev [Deputy Chairman of Russia’s Security Council] has said, that Russia has placed Zircon missiles with a hypersonic speed of Mach 9 off the coasts of NATO countries since the beginning of the year, then we are potentially at Armageddon within less than ten minutes. That has been vividly depicted by nuclear weapons expert Steven Starr in a video that shows how a nuclear war would play out. And that video must be distributed worldwide, so that every citizen of Earth learns about what would happen.

Now Mrs. Merkel, in December 2022, in interviews to Der Spiegel and Die Zeit said that the Minsk Agreements of 2014 and 2015 had never intended to pacify the conflict in Ukraine with the Donbass, but only served the purpose of gaining time for the armament and strengthening of Ukraine for the ultimately inevitable war with Russia. Former French President Hollande confirmed former Merkel’s statement shortly thereafter. The former Ukrainian President Poroshenko had earlier said the same thing.

The implication of Merkel’s claim is outrageous. If it is true, then all the statements made by her, made by all the other EU, U.S. and other government officials, have been lies all along.

For example, on September 9th, then Chancellor Merkel said to the Bundestag [German Parliament]:

In recent months, we have always and repeatedly advocated that the crisis in Ukraine can be resolved diplomatically. The goal here is that Ukraine’s territorial integrity be restored. The Minsk package of measures was adopted in February and it remains the guiding principle on this path.

I can tell you that the Federal Government, the Federal Foreign Minister, and I, together with the French Foreign Minister and the French President, will continue to monitor and to make efforts—including in the Normandy format—to advance this process, which has now entered a decisive political phase with regard to constitutional changes and local elections. We’re not out of the woods yet, but we’re not going to let up in our efforts, because we see that the diplomatic path is the only one that we should go down.

Then, on November 23, 2016 in Berlin, Merkel said to the German Bundestag:

We have to state in connection with Crimea and Ukraine, there has been a breach of international law and violation of the territorial integrity of a country. Unfortunately, our talks on the implementation of the Minsk agreements have not yet progressed as far as I would like.

I will also raise the issue with the Russian President at the G20 summit. We will take care of it. Nevertheless, we have the request to be smart on the Ukrainian side as well, because we know that, after all, we can only solve things reasonably and only by talking to each other. There are no military solutions to all these disputes.

At the Munich Security Conference on February 23, 2019, Mrs. Merkel said:

In 2014, there was the annexation of Crimea in March, which was clearly illegal behavior under international law. And then with Petro Poroshenko, there was a laboriously negotiated ceasefire, which was fragile so to speak, but it was kept stable by the Minsk Agreement, with which Germany and France, together with Russia and Ukraine, are attempting to resolve the conflict. However, we have to say that we are far from a solution, and we need to keep on working.

Over the past eight years, all political leaders have repeatedly stressed that the implementation of the Minsk agreements is official Western policy, although the two responsible states, that is Germany and France, have done nothing to persuade the Ukrainian government to implement them. And then there is the fact that the lifting of sanctions against Russia depended on the successful implementation of the Minsk Agreements.

So, if what Merkel said last December is true, then the nine sanctions packages that the EU adopted over the past years against Russia, which were intended to strangle Russia step-by-step—or ruin Russia, as Mrs. Baerbock said—were part of this long preparation for war. French Le Figaro journalist Georges Malbrunot reported in an interview with CNN in April 2022, that he had seen with his own eyes that the United States was already “in charge” of the Ukrainian army at that time.

In his Christmas address, [Russian President] Vladimir Putin spoke about the revelations made by Merkel and Hollande, and he said that what this showed was that he should have started the Special Military Operation much earlier. He said that confidence was now pretty much at zero.

In view of the shambles caused by Merkel’s remarks, the question is, have all those responsible been lying all along? Or, is Mrs. Merkel, who has recently been severely attacked for her earlier policy towards Russia, now saying all of this just to kind of cover herself, because the preparation for war has entered its final phase, and even the smallest concession of having once seen Russia as a partner must be buried? And Mrs. Merkel would rather go down in history as a politician, if there still will be one, belonging to the [Mike] Pompeo school of politics, “we lie, we cheat,” as he said.

In the same way, the current [German] government justifies the end of Nord Stream 2 by saying that Russia broke the Minsk Agreements. Perhaps the deafening silence on the perpetrators of the sabotage of Nord Stream 2 is related to the fact that people become speechless when they fear that every word implicates them in a crime.

So the official mantra imposed by the threat of punishment from the EU, also includes speaking only of “Russia’s unprovoked war of aggression.” Whoever dares to claim that the conflict in Ukraine has a prehistory, starting with the insistence on a unipolar world order after the end of the Soviet Union, the five NATO enlargements to the East, and above all, the Maidan coup in 2014 supported by the West, is denounced as a Putin agent or is put on lists, some victims of which have already died. There really is an urgent need to publish the chronology of the notable people, including George Kennan, who have warned over the last 32 years where this policy toward Russia would lead.

I can also only recommend reading the interview that the originally absolutely pro-Western former Prime Minister of Ukraine, Mykola Azarov, gave in 2016 on the third anniversary of the Maidan coup. In this interview, he goes into detail about the U.S. and European support for this coup, and extremely importantly, said that any peaceful solution to the conflict must begin by acknowledging that it was a coup d’état in February 2014. For that, there is incontrovertible documentation.

At this late stage, when we are seconds to midnight, if we are to make it out of this crisis, we need to create widespread overwhelming publicity, worldwide, for the demand for a diplomatic solution. Pope Francis’s offer of the Vatican’s premises for unconditional negotiations is the best option so far. Other proposals have been made, such as President Lula of Brazil, and other states of the Global South, as well as Türkiye’s President Erdoğan’s efforts. These efforts could coalesce around the Vatican’s initiative. I therefore ask you all to sign our Open Letter, which began with an initiative from Latin American parliamentarians to the Pope.

I know that many military leaders, in Russia, in France and elsewhere, consider that it is too late for this, and it won’t work. And that only military means will decide the outcome. I think that this risk is too great. It can quickly lead to a global nuclear war, the outcome of which no one will be around to discuss. Instead, we need a new international security and development architecture that takes into account the interest of every country, including Ukraine, Russia, China and all other nations. To this end, I have introduced ten principles to the discussion, which I ask you all to read and discuss. The main idea of the ten principles is that we, as human beings, are the creative species in the universe, and therefore we are able to find the higher level of reason at which any problem can be solved.

The first step must be to accept Pope Francis’s offer. And a worldwide chorus of voices must be raised to demand that negotiations begin immediately in Rome without preconditions. Yesterday, President Putin said yesterday that Russia is open to negotiations, however, that we take into account whom we are dealing with. As I said, we are facing a shambles of international trust. That is why we need the worldwide mobilization of all people of good will to join our chorus.