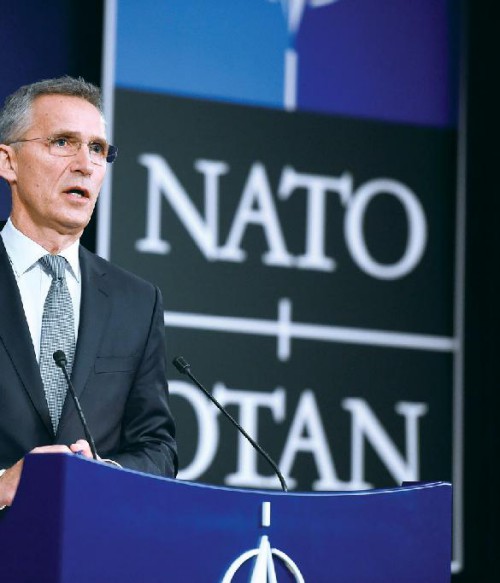 These are excerpts from Lyndon LaRouche’s article, published in EIR on June 28, 1996, on the need of the United States to replace NATO with a different security concept.

As replacement for NATO and for related, obsolete dogmas, the United States must adopt a comprehensive, radically new strategic outlook, pivoted upon comprehension of the crucial realities of the Eurasian land-mass. This comprehension is the key to the present and future of the world economy, and of the mutual political interest of all among that outlook’s present and prospective partners. In brief: The decisive strategic significance of the Eurasian land-bridge, now being developed, across the vast, underpopulated regions of central Asia, defines the urgency of developing, and of defending economic cooperation among U.S.A., Russia, and China, all in collaboration with India, as the key to the world of the Twenty-First Century. . . .

In net effect: NATO has ceased to serve any vital strategic interest of the United States, and, its degenerated nature has made it, in fact, an instrument employed by forces working against our vital interests. Exemplary is the already referenced case of those Balkan wars, which were organized as a geopolitical action, by the joint initiative of the governments of Prime Minister Margaret Thatcher and France’s President François Mitterrand. Since no later than 1992, the leading explicit adversary of the most vital U.S. strategic interest, has been the resurrection of King Edward VII’s Entente Cordiale, by Thatcherite London and François Mitterrand’s Paris. Under the influence of that revived London-Paris alliance, NATO has degenerated into an instrument of sabotage of U.S. efforts; it has proven itself, increasingly, the adversary of the U.S. search for a just peace in the Balkans, and, of our vital interest in defining, and defending durable premises for improved understanding and cooperation with our important new partners throughout eastern Europe as a whole, Russia and Ukraine typically.

The tradition of European military science, since St. Augustine’s articulation of the principles of “justified warfare,” does not tolerate postponing the dissolution of NATO in its present form. The United States, in its self-interest, and in its responsibilities as the leading world power, must scrap the tainted strategic relics of the 1946-1989 interval, and devise a new strategic doctrine, one attuned to the global realities of post-1989 developments. . . . .

A New, Global ‘Alliance for Progress’

The objective is to reach, with Russia, China, and other nations, an operating agreement of principle, under which to employ the concerted power of this group of nations, to debride the relations among nations of those relics of the old financier-oligarchical form of power, such as the dogma of “geopolitics,” which have variously ruled or dominated the affairs of this planet for much too long.

The President of the United States should place a motion to this effect before those nations which regard themselves as prospective members of such a community of principle. This action, whether public, or conveyed by less publicized channels, should be regarded as modelled in principle upon the more modest, but otherwise kindred precedent, of President James Monroe’s 1823 promulgation of what became later known as his “Monroe Doctrine.”

By means of that assertion of the interests of the peoples and sovereign nation-states of this planet, against the arrogance of oligarchical traditions, the parties to the operating agreement should employ their power to establish certain new institutions and cooperation among them, to the benefit of all such sovereign nation-states, their present populations, and the posterity of us all.

The guiding principles of practice shall be the fostering of the realization of the cognitive potentials of the individual personality, throughout the planet, the general increase of the potential relative population-density of the human species, and the assurance of a continuation of that increase over generations yet to come. Otherwise, it should be desired, that all works which are good, and which are consistent with mankind’s status as the noblest being of creation, including the exploration and colonization of regions of the universe outside our planet, shall be fostered. It should be the common opinion of the parties, that the principles of love of truth and love of justice shall be the efficiently governing conscience of us all.

This established agreement among those parties should be regarded as constituting an efficient community of principle, whose common interest shall be implemented by appropriate undertakings, excluding any measure which would subvert the perfect sovereignty of any among them.

The success of this venture depends upon the co-sponsorship provided by those sympathetic parties whose national economies are either the largest, or most powerful in the world. The actually or potentially sympathetic nations who meet that qualification, are the U.S.A., Russia, China, and India. The most important economies, after these four, are western and central continental Europe combined, the nations of the Asia archipelago, and, potentially, South and Central America combined. Other nations are prospective, sovereign parties to the common effort.

The urgent task before us, is to halt and reverse the presently ongoing, catastrophic decline in per-capita amount of useful physical output of the world economy considered as a whole, the elimination of what is presently the worst speculative financial bubble in the entirety of human existence, and the termination of so-called “free trade” policies, to the purpose of restoring those policies of internal national economic security for each and all sovereign nation-states, especially in the domain of national food and power security. This requires agreement on a selection of major infrastructural development projects, and some other projects of similar regional and global impact.

It also requires the elimination of the presently hegemonic system of monetary, tariff, trade, and credit relations, a system premised upon the unwholesome special interests of financier-oligarchical and kindred monetarist interest, and the replacement of that undesirable and fatally diseased present system, by the constitution of a new international monetary, trade, and credit system, based upon appropriate, new axiomatic principles, and new general agreements on rules of tariffs, trade, and international credit.

Throughout the Twentieth Century, the greatest single obstacle to justice for all of the peoples of this planet, has been the rabid, so-called “geopolitical” determination of the British Empire and its accomplices, to prevent the establishment of efficient forms of continuing economic cooperation between industrialized western continental Europe and the most populous regions of the Pacific and Indian oceans’ littorals. A foisted war between Russia and Japan, early in this century, and, after that, two so-called “World Wars,” and one prolonged excursion to the brink of general intercontinental thermonuclear warfare, have been foisted upon the peoples of this planet, by that self-perceived “geopolitical interest” centered in the capital of the British Empire and its hangers-on. That delayed undertaking, bridging the relatively vast, and sparsely developed spaces of Central Asia, is the natural pivot for the recovery and continued growth of the physical economy of the world as a whole. 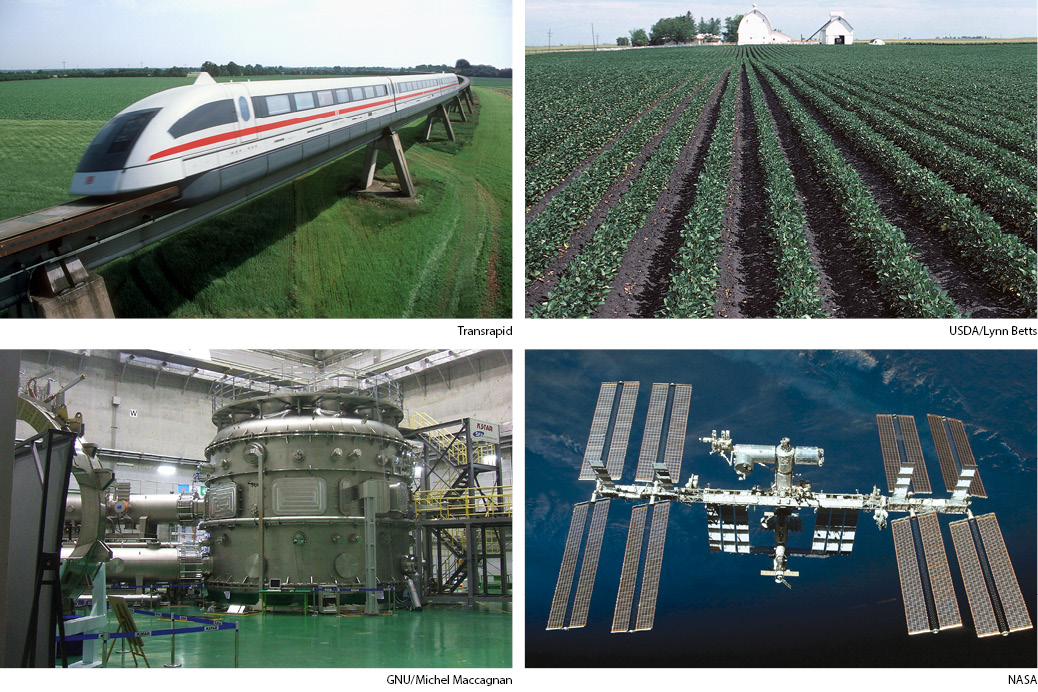 The development of modern forms of rail and magnetic-levitation transport, from Brest in France, through the great rail-hubs such as that of Berlin, to the shores of the Pacific and Indian oceans, is the natural centerpiece of a global recovery of growth rates in the planet’s physical economy as a whole. These transport links, re-enforced by improved and extended inland-waterway systems, and by development of the infrastructural elements of power-production and pipelines along the pathway of the development corridors defined by the transport links, open the back door across Eurasia for the greatest expansion of economic growth in history.

The economic interaction fostered, indispensably, by the combination of development of such Eurasian land-bridge corridors, and complementary maritime development in the Pacific and Indian oceans regions, links every part of the world, efficiently, to the impulse of economic growth and development unleashed within Eurasia.

That connection between infrastructure-based economic development within Eurasia, and links to other parts of the world economy define, implicitly, a larger, inclusive project of global development, with three leading features: 1) A complex of inter-linked infrastructure-development projects and related programs including every part of the planet; 2) An emphasis upon ending food insecurity, and also ending lack of internal food security, for every nation of the planet; 3) A selection of long-term scientific “crash programs,” including or analogous to long-term space-exploration and -colonization programs, and including biological-research “crash programs” addressing problems of health and related concerns, to provide the technology-driver for both the public and entrepreneurial sectors of the world’s economy as a whole.

This commitment requires the establishment of a new monetary system, based on a network of relatively fixed long-term parities among national currencies, and fair terms of tariff and trade protection for each national economy within the system. It requires the replacement of the presently hegemonic system of central and analogous banking, by the kind of national banking consistent with the American System of Hamilton, the Careys, and Friedrich List. It requires a system of medium-term and long-term international credit, at fixed, minimal prices, to foster that international trade and international and national investment in the infrastructure and selected entrepreneurial programs which the community of principle regards as in the relatively highest general interest.

The full article by LaRouche can be found here.