This article appears in the May 22, 2020 issue of Executive Intelligence Review.

Schiller Institute Conference on the InternetMay 9, 2020

75th Anniversary of V-E Day: Commemorate the Victory Against Fascism with a New Bretton Woods System

A report on this conference, and the presentation by H.E. Mr. Dmitry Polyanskiy representing the Russian Federation, was featured in last week’s EIR. This week we present the other four opening speeches from that three-hour conference. More will be presented in upcoming issues of EIR.

This is the edited version of an excerpt from a presentation by Mr. LaRouche in Queens, New York in June 2003. A video of that presentation, which was broadcast as part of the June 8, 2019 memorial for Lyndon LaRouche in New York City, is available here. 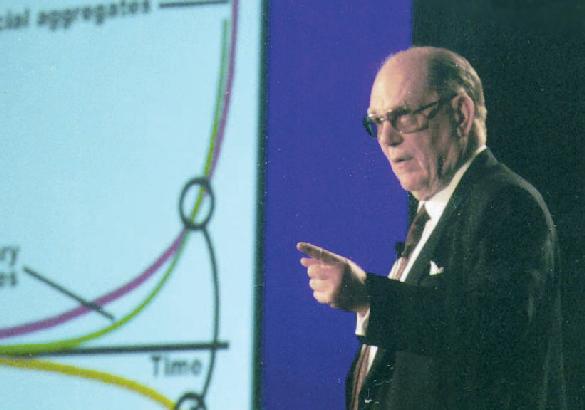 Friends, if you look around the world today, you have two pictures, one, a fearful one, the spread of war, the threat of war, terror. On the other hand, in Asia in particular, Eurasia in general, there’s a new movement, a new cooperation among the nations of Asia, steps toward cooperation: Pakistan, India, China, Southeast Asia, Iran, nations of central Asia, Russia, moving toward Europe. The world is in a great crisis, a great economic crisis. The financial system is in danger of collapse, and will collapse. But we can fix that. Governments have the power to fix those kinds of problems, and life will go on. The problem is, above all, the mind of the people of the world.

The other aspect which is important as I see it, around the world today, is pessimism. In the United States there is great pessimism; there’s an affliction of pessimism in politics. What we sometimes call corruption in politics, and it is corruption, is a fruit of pessimism. People say you can’t put the toothpaste back in the tube; you can’t change the way things are going; you can’t improve the political system; you can’t solve the problems; you’ve got to learn to live with the problems—pessimism. And pessimism leads to corruption. And around the world, the same problem—pessimism, pessimism in Africa, especially in black Africa, pessimism in Europe, pessimism in Eastern Europe, and less so in China. China is more confident, but fear in Korea, fear of what might happen, fear in Japan.

So, the most important thing, in my view, in my experience in leadership, is optimism, not arbitrary optimism, not false optimism, but knowledgeable optimism. The knowledge that we can, if we will, do the things that have to be done.

I know that in the period of World War II, when the United States had gone through a great period of pessimism in the 1920s and early 1930s, we began to come out of that pessimism during the period of the 1930s and the war. We were able to meet the challenge of war and the challenge of the hope of peace, which Roosevelt represented, because there was optimism in the people. I saw things happen in wartime, under wartime conditions, which expressed optimism. People would do what they thought was impossible, because they were optimistic.

I’m confident that the United States can change. It can change from what it is now. It can change quickly. What we’re doing now is wrong, but it can change. It doesn’t have to go on like this. And I’m determined to bring that change about. And being an older man, I have nothing to fear, and therefore, I can go ahead and do it, or try to do it at least. But I think one should not be pessimistic. I know what goes on in the United States, I know the persecution of so-called minority groups. I know the persecution of Islamic populations, or people from Islamic backgrounds. This is a melting pot country, we have everybody in this country.

This is not a country of Anglo-Saxons, it’s a melting pot nation from all parts of the world. Chinese, Koreans, Mexican-Americans, Spanish-speaking Americans of all kinds, all branches of Europe, Turkey, the Middle East, Egypt—they’re all here. This is a melting pot country in which the richness of the country is the fact that we’re a melting pot country. We live together, and by living together with different cultures and backgrounds, we have an understanding of what peace means. It means we’re united by a common purpose to create a society and a world that works in a certain way. I’m convinced we can do it, and I’m convinced that you should be optimistic, too, with me. I think we can change this. I’m determined to change it. I think we can succeed.