Lyndon H. LaRouche, Jr.Building a Youth Movement to Save a Bankrupt Nation 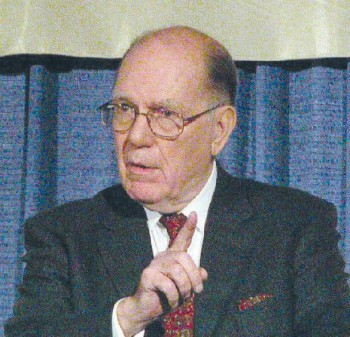 Lyndon LaRouche is, among many other things, the founder of the LaRouche Youth Movement. This is an audio excerpt played during the Schiller Institute International Conference, on June 27, 2020, “Will Humanity Prosper, or Perish? The Future Demands a Four-Power Summit Now,” on Panel 3: “The Job of Youth,” of remarks delivered by Mr. LaRouche on February 1, 2003 to an East Coast Youth Movement cadre school in Pennsylvania and, simultaneously, by video-conference, to a West Coast youth cadre school. A transcript of his entire remarks, including the discussion session that followed, is available here.

Historically, only a certain kind of youth movement can change things.

So, you know that. What are you going to do about it? You know that you don’t have a future unless you can change society. But you’re a generation which is not in a controlling position in policy-making of society. So, what you do, is you go out like missionaries, and begin to organize the dead generation, your parents’ generation, in society. And you see the impact you have when you go into these various places, like the campuses—go into places such as the state legislatures, or the Congress—you see the effect you have. The presence of four, five, or six of you, walking in, knowing what you’re talking about, which is more than most of these legislators can do, and others: You have an effect on them.

What happens then, is not magical, it’s principled. Whether people know it or not, the difference between man and a monkey, is the fact that the human species can do what no monkey can do, no ape can do, no Al Gore can do: Actually assimilate valid ideas of principle, and transmit them to a next generation. That’s the difference between man and the ape. Man is capable of discovering universal physical principles by a method of discovery which is illustrated by Plato’s dialogues. Or illustrated by the case of Kepler, or illustrated by the case of Gauss, or the case of Leibniz. Man can do that—and transmit these discoveries, about what’s out there in terms of principles in the universe, and transmit this to new generations.

These discoveries, and their transmission, increase man’s power in the universe, per capita and per square kilometer. Therefore, the most important thing about man, is society. We all die. Everyone is going to die. The mortal life of everyone will come to an end. So, you’ve got a mortal life; what are you going to do with it?

How long it is, is not the most important thing. It’s what you go out of this life, leaving behind.

And when you’re wise, and you’re living in a generation, you think about dying. Not in the sense of a morbid thing, but you say, “I’m going to die eventually. Now, while I’m still here, I’m going to get a certain job done. And my job is, to guarantee, to the degree I can contribute to this, that the next generation will have everything we have, in terms of knowledge, and the next generation will have a better life than we had. And that future generations will benefit from what we, in our generation, have done.”