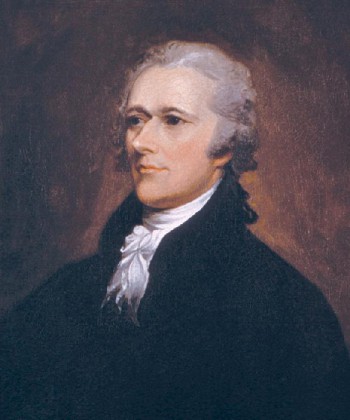 John Trumbull, 1806
Alexander Hamilton, our nation’s first Treasury Secretary and author of three reports to the U.S. Congress—on the subjects of national credit, a national bank, and manufactures—which rescued our new nation from its 1787-1789 bankruptcy.

Very soon, the doomed, present international financial system will disintegrate. It can not be managed, or repaired; its doom is certain, and soon. We are already in the final phase of its destruction. This destruction will occur either in a rational way, through merciful, pre-emptive actions by individual governments, or in the most tragic way, spontaneously, and chaotically. Either way, the present financial system is doomed to disappear, very soon.

Under these circumstances, the continued existence of the U.S.A., as of other nations, depends absolutely upon the alacrity with which the government responds with certain required, immediate measures of emergency action.

If the measures specified here are taken, this nation will assuredly survive the crisis, and that most successfully. If the political will to adopt and implement such emergency measures, immediately, is lacking, the nation will be torn apart by the chaos caused by its stubborn refusal to change the present system. If the present posture of clinging to the self-doomed dogmas of “free trade” and “globalization” is not overturned, chaos is already inevitable; in that case, this nation will not survive in a recognizable form.

The following are exemplary required measures.

When that disintegration of the world’s present financial system occurs, the U.S. and other governments, if they are sane, will each consider themselves obliged to take certain, instant, autonomously sovereign, and drastic emergency actions. The immediate purpose of these actions, is to maintain the social stability and general welfare of the nation and its entire population. The rule governing these actions, is: “People first! All the people!”

Using the case of the U.S.A. itself as the example, the case can be stated as follows.

2.1. These actions will give absolute priority to the continuity of the essential functions of government itself, but will also give equal priority to maintaining the continuing function of all essential elements of basic economic infrastructure, agricultural operations, manufacturing and closely related operations, and the physical distribution and commerce in those goods and services essential to maintaining the life of persons and households. Enabling action expressed in such legal forms as emergency laws and decrees, will be needed for this purpose.

2.2. These actions must not merely maintain infrastructure, agriculture, manufacturing, household, and related essential physical-economic activity at levels existing prior to the “crash.” Immediate steps must be taken, chiefly by initiative of government, to increase the levels of useful output from these categories of activities, this at the expense of forms of services which are not essential to the health of the physical economy and its population. For the case of the U.S.A. itself, these actions will be taken with an eye to the methods of emergency action taken under President Franklin Roosevelt, for the period for World War II.

2.3. Some special, supplementary actions must be taken. These will include a moratorium on financial foreclosures of home-owned residences and closely related, functional essentials of private ownership. This must be complemented by absolute protection of the bank deposits of individuals, up to a specified, modest amount per capita. Similarly, basic health-care programs must be funded to similar effect. The general rule for such and related measures, is to leave the household and small business affairs of the individuals and families at the discretion of the individuals, as much as possible, freeing decisions within this area from the burdensome and complex details otherwise demanded of governmental interference, as much as possible. 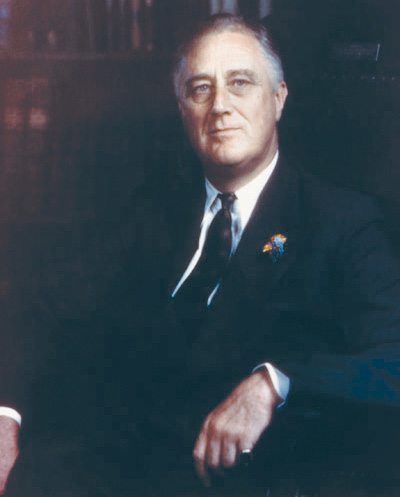 FDR Library
President Franklin D. Roosevelt, whose great-great grandfather Isaac Roosevelt was a close collaborator of our first Treasury Secretary Alexander Hamilton. Roosevelt looked back to the early American republic and the Hamilton-Roosevelt collaboration for inspiration and guidance.

3.1. The U.S.A., like most nations of the world presently, and most globalized financial institutions, is already hopelessly bankrupt financially. It is not necessary to wait, to see if the bank collapses, to know, already, that this is so. Only desperately wishful fools would deny that to be a fact.

3.2. As in any bankruptcy of a major, once stable economic enterprise, the bankruptcy did not come all at once, but occurred through the cumulative effect of wrongheaded policies, each piled on top of one another, over a long period of time. In the case of the U.S.A. itself, a period of not less than thirty-odd years. Fortunately, the set of principles on which the U.S. economy, in particular, was operating prior to thirty-odd years ago, was predominantly sound in effect. That being the case, we must reorganize the U.S. economy as we would act to bring any essentially sound economic enterprise back to healthful life, by reorganization in bankruptcy.

3.3. The actions to be taken initially, are to eliminate the bad management and the bad policies of practice, and to write off that portion of the total amount of putative present financial obligations, the which must be written off, if the enterprise is to resume the degree of healthy growth it enjoyed status quo ante—prior to thirty-odd years ago.

3.4. In the case of the bankruptcy of the financial system of a sovereign nation-state, there are special rules to be considered, differing from those which might be appropriate to any institution other than a nation-state. Fortunately, in an earlier period the U.S. as a whole was bankrupt, 1787-1789, those implicitly constitutional considerations have already been addressed, principally by U.S. Treasury Secretary Alexander Hamilton’s three reports to the U.S. Congress, on the subjects of national credit, a national bank, and manufactures. These rules apply not only as the relevant U.S. precedents, but serve as a model of reference for other sovereign republics.

Although we must give due consideration to debts and assets defined in terms of differing media, the central point of reference for the financial, monetary, and related policies of the U.S. government, especially under conditions such as these, is the sovereign currency of the U.S. government, which can be nothing other than U.S. Currency-Notes issued according to constitutionally prescribed procedures for this. For reasons stated by Secretary Hamilton, that form of currency, and other forms of debt directly incurred as U.S. Debt (rather than other Federal Reserve debt), constitute the primary, absolute obligations of the U.S. government in face of a general financial bankruptcy of the nation, such as that now extant. The “full faith and credit” of the U.S.’s currency and sovereign debt, must be defended, as the premise for the credit-mechanisms employed in coming out of the end of the present international financial system. The role of U.S. currency, on this account, is not limited to the case of the U.S.A. itself; the special importance of the U.S. dollar is global, still today.

The central principled issue of financial reorganization, is that the defense and deployment of those forms of U.S. sovereign debt, are the financial mechanisms of credit-creation, through which the U.S. real economy shall be revived from its present degenerated, torpid condition. 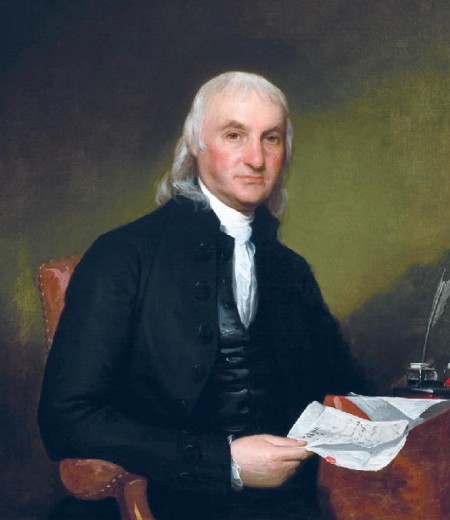 Gilbert Stuart
Isaac Roosevelt (1726-1794) was an early proponent of bank development, whose work was closely studied by his direct descendant, President Franklin D. Roosevelt. He was a founder and later President of the Bank of New York, whose original articles of association were drafted by Alexander Hamilton.

3.5. With one additional provision, let paper values otherwise, fall as low as they please. “It is only paper, after all.” If a bank’s net worth is less than zero, we may choose to support its continued functioning, because the sovereign U.S. requires that such a bank exist for the needs of the citizens and economy of that locality. The protection of modest financial and other assets of individuals, households, and certain varieties of enterprises which are defined as essential in physical-economic terms, follows from the same general principle.

3.6. The object is to expand the physical-economic activity and productivity of the economy and of the population as a whole, such that the economy is meeting the needs of the entire population, and also operating above physical-economic break-even levels. To this purpose, U.S. national credit must be supplied, through national-banking methods, radiating through participating private banks, into the relevant enterprises of the nation’s government and private sector, as we built up what became the prosperous U.S. economy of the 1950s and early 1960s, from the deep economic-depression levels supplied by Treasury Secretary Andrew Mellon’s policies of the 1920s and early 1930s.

Our nation has done this in the past, has known how to do that in the past, and can apply those lessons to doing the same, or better, once again.

During 1861-1876, again during the economic mobilization of 1914-1917, and during 1933-1945, the U.S. used a combination of large-scale infrastructure-building and science-driver programs in technological progress, with effects whose successes astonished the world of those periods. The leading priorities in organizing a long-term period of successful, global economic reconstruction, are the following.

4.1. Basic economic infrastructure: principally water-management and general sanitation; mass transportation of freight and passengers; power, with emphasis upon increasing energy-flux density and coherence of primary sources; basic urban infrastructure as such; and, national and international mass systems of education, science, and health-care. Large-scale, long-term investment in these improvements in basic economic infrastructure, supply the foundation upon which the potential for real economic growth depends.

4.2. Fostering employment of operatives in basic agricultural and industrial production, with emphasis upon those increases in the productive physical-economic powers of labor which are realized solely through emphasis upon increased rates and levels of per-capita investment in capital-intensive, power-intensive modes of scientific and technological progress.

4.3. Increasing the role of the machine-tool-design sector of production as a percentile of total labor-force employment, and the development of these capabilities to ever higher international standards, and with greater density of efficient delivery into national economies and the localities of those economies.

4.4. Integrating the educational, fundamental research, and machine-tool-design functions of the world’s and national economies around science-driver programs, including the aggressive exploration and colonization of nearby portions of our Solar System.

Generations have passed since a very nasty fellow, Harvard Professor William James, wrote of “the moral equivalent” of war. The only true moral equivalent of war, is to mobilize for development of the world’s economy, to the benefit of each and all nations of the planet, and to do this in a way we have never mobilized before, except for purposes of war. That, in summary, is the task, the policy which sane governments will adopt now.