America’s Challenge to the British Oligarchy

This is the edited transcription of an excerpt from Mr. LaRouche’s speech keynoting the September 2, 2000 annual Labor Day weekend conference of the International Caucus of Labor Committees and the Schiller Institute, “Storm Over Asia, Take Two: I Told You So, and Now It Is Happening.” The video for this excerpt opened Panel 1 of the Schiller Institute conference on September 5. 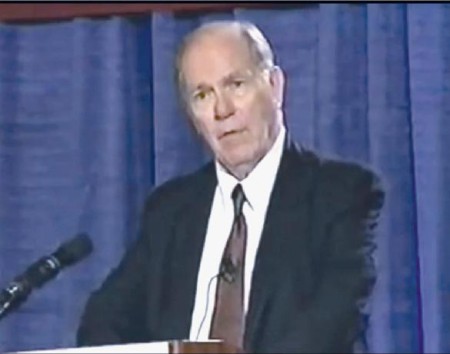 The British Empire, the British monarchy, was created by a rentier-financier interest which consolidated its power over the English monarchy with the accession of George I, as the first King of the United Kingdom of Great Britain. From that time on, the establishment of an independent republic in North America, became the central interest and cause of all of the patriotic, republican-minded people in Europe. As a result of this, European forces—in France, especially France, in Germany, Italy, England, and so forth—united to help make the United States’ independence a success. The United States became an independent republic, only because of European direction and support for this cause.

The Jacobin Terror of 1789—that is, from the 14th of July 1789, until the beheading of Robespierre and Saint-Just five years later—demoralized Europe, and isolated the United States, which no longer had friends in Europe, or significant nation-state friends. And, thus, the United States was isolated.

The United States recovered from this isolation, with the victory of the United States, under the leadership of Abraham Lincoln, over a British puppet, the Confederacy, an institution which, like the French Jacobin Terror, had been orchestrated from London.

Specifically, in the case of the Jacobin Terror: The Jacobin Terror was organized in France, under the direction of the first head of the British Foreign Office’s Secret Intelligence Service, the Secret Committee, by Jeremy Bentham. And, all of the leaders of the five years of the French Terror, the Jacobin Terror in France, were all operating under the personal direction of the head of the British Foreign Office intelligence service: Jeremy Bentham. The purpose was to destroy the chief ally of the United States—France, at that time—to prevent it from coming back as what it had been before. And, so forth.

After the War of 1812, the chief effort from Britain, was to destroy the United States—from within. To this purpose, traitors in the United States, centered in Wall Street, and similar locations, organized what became known as the Confederate conspiracy. You had President Andy Jackson, who was a traitor. So was President Polk—a traitor. Both great Democratic—these are the founders of the Democratic Party. Martin Van Buren was the puppet-master in charge of the traitor, Andy Jackson. Polk was a British agent. President Pierce, another “good Democrat,” was a British agent. President Buchanan was a British agent. These are the people who, with Polk’s initiative, organized and prepared the military conspiracy, which became known as the Confederacy.

That was the great world cause, the cause of all humanity, for which the greatest war ever fought by the United States, the Civil War, was fought. Led by Lincoln. The defeat of the Confederacy, was a defeat of the British Empire, a change in the strategic situation, and the bringing back to European civilization of the hope, of a form of society, free of control by the kind of oligarchy, which, then and now, has been represented, worldwide, chiefly by the British monarchy, and by the bankers, the financiers of the City of London, and by the British Empire.

The British Empire always was, and remains to this day, the chief enemy of all civilization, and of the United States, in particular.

Why the British Hated Roosevelt

But, Roosevelt was the greatest threat to the British Empire, once the war had been won. Unfortunately, at that point, he was dead. And Truman was a stooge. Because, what was Roosevelt’s policy? Why did the British wish to be rid of Roosevelt? Why did the British spend the past period, since the death of Roosevelt, trying, among other things, to destroy the United States, the way we are half-destroyed today?

Why? What’s the issue? What underlies this whole history leading up to this so-called “Kursk incident” near-brush with thermonuclear war, which occurred on the period of Aug. 12, through 13 and 14?

And, the United States, as Roosevelt laid this out to Churchill at Casablanca, for the case of Africa: The United States would use its technology and power, not only to bring about the freedom, of the victims of British imperialism, but also to give these countries—the newly freed countries—the means to stand on their own feet economically, with U.S. cooperation in infrastructure and technology.

In other words, what Roosevelt intended, was that the former victims, or the victims of British imperialism, would have the same benefits, which the United States brought to western continental Europe, to western Europe, with programs, such as the original IMF, the original Bretton Woods agreement, and with the Marshall Plan, later.

Thus, the first thing to understand, if you’re going to make sense of the modern world, of the past three centuries of history, and longer: You have to understand that the fundamental issue, since the Declaration of Independence in 1776, the fundamental, strategic issue on this planet, has been two policies: The policy of the British Empire against the policy embedded in the Declaration of Independence and in the Federal Constitution, especially the Preamble.

Any other interpretation of history, or major events, is nonsense. And that’s what people are going to have to learn.