THE PRINCIPLE OF THE FLANK

Note from the editor: Oct. 30–As of this writing, there is no one now living who knows what the world will look like next Wednesday morning, November 4, 2020.

In one of his writings, Lyndon LaRouche defined the German military term Entschlossenheit, popularized by Carl von Clausewitz, roughly as follows: In a highly-charged, highly-dangerous situation, while having only the most dubious and fragmentary information, you must nevertheless reach an immediate evaluation for action, which is either right or close enough—and act on it immediately, without one second’s hesitation, absolutely forbidding the adversary from seizing the initiative.

That is what history requires of us next Wednesday morning, and that is the spirit in which this article, written by Lyndon LaRouche in 2011 under the Obama administration, is reprinted here and now.

The ancient Roman army was destroyed by Hannibal through his double-flanking operation. A greatly superior force of the Austrians was defeated in their well-designed copy of Hannibal’s defeat of the Roman military, a copy of which was successfully accomplished by defeat of the superior mass of Austrian forces by a lesser force directed by Frederick the Great, at Leuthen. The principle in both exemplary cases was secured not through military forces as such, but by the principle of strategies which inheres in the human mind, not the nominal strength of the troops as such. The issue in such cases, is not forces as such, but the superior principle which the mind of the commander and his forces have brought to bear. War is best won by other means.

A crucial example of this principle was demonstrated by the advice of the General Douglas MacArthur who advised President John F. Kennedy not to permit a protracted U.S. land-war in Asia; Kennedy agreed, and Kennedy was assassinated because he opposed a war which the British conceived as a means to ruin Britain’s most capable rival, our United States. By means of the assassination of Kennedy, the war proceeded, and the United States has been ruined to great British satisfaction, ever since. Such matters are essentially expressions of the battles of the mind, as certain U.S. Presidents have served the British imperial intentions ever since the assassinations of President Kennedy and his brother Robert.

In a similar fashion, the United States has been ruined by aid of Presidents such as Barack Obama, whose essential loyalties have been expressed in his impassioned ties to the British imperial Queen.

The only proper issue in fighting a war, is that there is no alternative. Considering the risk, and the costs of entering a state of warfare, it were better that it never need be fought at all. If necessary, develop the capabilities needed to defeat an enemy whose predatory intentions might not be deterred by lesser means of restraint; in such matters, as chess masters have asserted, the threat is more powerful than the attack.

As Chancellor Bismarck had warned, Germany must not support the Austro-Hungarian empire in a new Balkan war, since such an Austrian attack on the weaker Balkan force would provoke a massive deployment of Russian forces against the Austro-Hungarian empire. If Germany were stupid enough not to blackmail the Austrian Kaiser into backing off from Austria’s London-directed Balkan war, London need only eliminate Chancellor Bismarck from office, to insure that the British geopolitical warfare on the continent of Europe would bring about the ruin of war-soaked continental Europe. Bismarck was discharged by British Royal family hands, and World War I, and the premises for World War II, were, so to speak, “in the bag.” The British monarchy’s backing of the rise of Adolf Hitler in Germany, secured the virtual inevitability of World War II and of the consequences of that war. 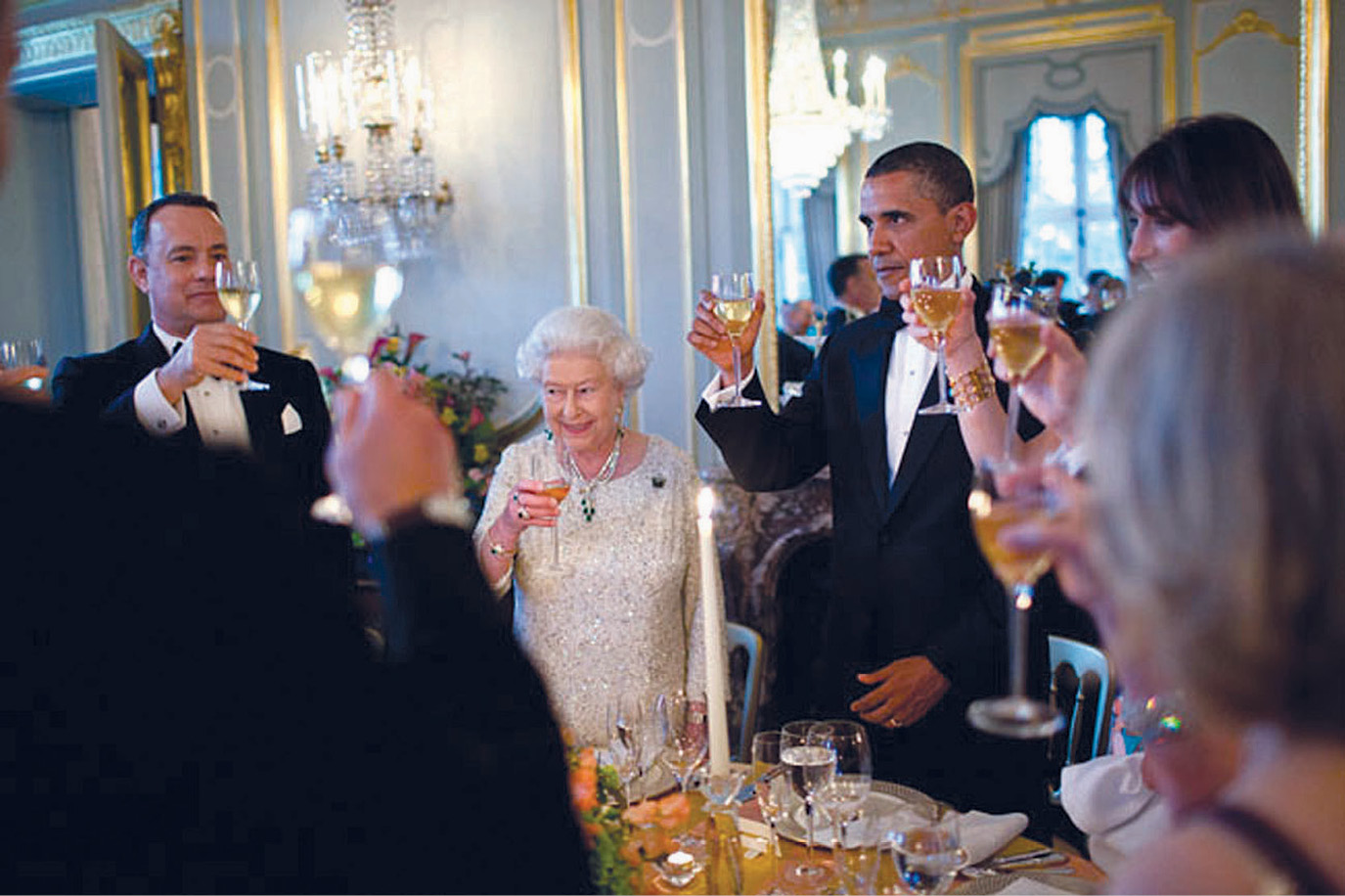 White House/Pete Souza
“The United States has been ruined by aid of Presidents such as Barack Obama, whose essential loyalties have been expressed in his impassioned ties to the British imperial Queen,” LaRouche writes. Here, the traitor President toasts the head of America’s historic enemy, the British Empire.

Notably, as former Chancellor Bismarck had warned from his place of forced retirement, the then foreseeably inevitable World War I, and also the overthrow of Russia’s Czar, were chiefly the British reaction to the victory of the United States under President Abraham Lincoln over the British intelligence-diplomatic services’ operations in launching the British-backed Civil War in the United States. There were two principal motives of the British imperial monarchy’s 1890-1917 campaign to wreck the set of nations of continental Europe through a war conceived as a grand strategy in the likeness of the British victory in its orchestration of the so-called “Seven Years War.” Bismarck, in his pre-World War I forced retirement, stated exactly that point.

It is essential to understand that the British empire is an empire, an empire which is not essentially premised on colonies as such, but on the ability of its diplomats, associated intelligence services, and both witting and witless British allies and accomplices to orchestrate wars fought at great expense to the regions of the world of concern at that time. In the case of the British Empire’s orchestration of the first and second “World Wars,” the pivotal issue was the combined effect of the establishment of the U.S. transcontinental railway system, and the echo of the same quality of intention within not only continental Europe, but the extension into Asia: hence, Britain’s avowedly “geopolitical intentions.”

Essentially, that pattern has been continued, from the reign and rampage of the New Venetian Party’s representative, William of Orange, in Britain, through much more than two so-called “World Wars,” in the British monarchy’s steering of the imminently terminal state of general economic collapse of the United States and of many other nations, a collapse which is entering its terminal phase under the direction of the current British monarchy. If not stopped now, within as short a time as weeks, or as long as a few months, the entirety of the planet will be plunged into the most monstrous orgy of death and other ruin in known history.

Thus, at the present moment, everything depends upon the immediate re-enactment of President Franklin D. Roosevelt’s 1933 Glass-Steagall legislation. There is broad-based and deeply rooted desire in the United States population to have the current U.S. President, Barack Obama, tossed peremptorily out of that office, on grounds contained within the U.S. Twenty-Fifth Constitutional Amendment; the grounds is provided by clear evidence of a mental instability in this current President, which is located within the provisions of that Amendment. Obama is a repeatedly avowed agent-in-fact of an alien power, the current British monarchy.

This occurs within a presently oncoming general breakdown-crisis of the economies of the trans-Atlantic region generally. An accelerating plunge in the physical output and wealth of the U.S.A., per capita, and per square kilometer, in which the U.S. economy is profoundly bankrupt in both financial and physical terms of per-capita assets and per-square-kilometer physical incomes, has created a condition throughout the trans-Atlantic regions, including the interior of Europe, which is now at the brink of an explosive physical-economic implosion which, if permitted would be the end of trans-Atlantic civilization, a breakdown comparable in characteristics of form to what was done to Weimar Germany in 1923, this time on a trans-Atlantic scale, rather than a single nation.

The only action which could be taken to avert such a plunge into a prolonged “new dark age” of the planet, would depend upon a certain initiating action from and by the United States: the re-installation of the 1933 Glass-Steagall law, with the exact terms specified during the 1930s decade under President Franklin D. Roosevelt. If that is done, then there must be a second action: a return to the protective economic measures used for the U.S., partly in response to World War II, then, but required as purely an economic recovery action now: price and related controls to prevent an active threat of a runaway inflation. The intention would be to return the United States, and partner-nations to the traditional agro-industrial intention of the United States which was elaborated in detail by U.S. Secretary of the Treasury Alexander Hamilton: the intention which had been established as the essentially strategic implications of the U.S. Federal Constitution.

Europe, which we are compelled to assist in the same measures of relief in our own U.S. interest, would need to get out of its particular form of current mess, by adopting a credit system comparable to Glass-Steagall’s intentions and effects. The proper objective of such a rebuilding of economic policy, is to establish a fixed-exchange-rate credit system among nations, with a view to facilitating globally extended cooperation in long-term, capital-intensive modes of upward leaps in physical productivity throughout the planet.

We must recognize, at the same time, history does not exist on what many identify, symbolically as a flat plane. That brings us here to the particular intention of making clear why we require a return to a system of what are, respectively, sovereign nation states.

The notion of a “one world” society, means what would be, inevitably, a world empire of the worst possible quality. It would mean a world-dictatorship of an entrenched and entire form of tyranny which would be, in respect to all of its objectionable aspects, a form of imperial grip and mass-murderous proclivities, called “governance,” comparable to, but probably worse than the Roman Empire at its ugliest. Today, it is chiefly the United States, China, and India, which are the chief, still-standing ramparts from which the threat of an inherently pro-genocidal “green” tyranny is already seeking to rule the world.

To secure a practicable form of understanding of this challenge to even the merely continued existence of some degree of human standards of human life on this planet, we must examine the case for the principle of the sovereign nation-states system. That system implicitly defines a specific quality of human interest on which present efforts to defend an actually human quality of human existence now depend.

What, in brief, is the difference between the human being and the edible features of cows, pigs, chickens, and the like? The answer is: nothing but those creative powers of reason, powers which are lacking in every other form of life presently known to us. It is, in short, those noëtic powers specific to the human individual, the power to make revolutionary developments of progress in the general condition of mankind, and that universally if we choose to adopt that standard of practice.

The creative powers of reason specific to the human species, are customarily found in the Classical artistic expressions of composition, although not the prevalent standard of art practiced among populations since the 1950 European adoption of the existentialist doctrine of the Congress for Cultural Freedom. It is the development of the creative powers of the individual, and the sharing of the qualities and fruits of those specific kinds of powers, which provide the essential development of personal character of the human individual. The Classical function of metaphor in both art and the creation of the discoveries of what are truly universal physical principles defines the truly human form of biological prototype as Russian Academician V.I. Vernadsky did with the advent of his development of the concept of a Noösphere.

Our war for today, is a war of defense of the principle which separates the truly human individual from the lower forms of life. Creativity, as I have referenced that conception here, and in other published locations, is the true standard of humanity, the quality which expresses the essential distinction of man from vegetable and beast.

Therefore, defend the true nature of mankind, while we are still able to do so. The time is short, and the opportunity brief. Act now, without fear-driven capitulations to the evil which is seeking to close in upon us presently.