This article appears in the November 13, 2020 issue of Executive Intelligence Review.

Note from the editor: At this particular moment, a special reason for reprinting this article by Lyndon H. LaRouche, Jr., from the Obama years, is the catastrophic historic effects of the John Kennedy assassination, as LaRouche portrays them. Were Joe Biden’s fraudulent theft of the Presidential election from Donald Trump to be accepted, the result would be far worse. Fortunately, the American people are not accepting it; they are active both in the courts, and in mass, peaceful protest in the streets against this travesty all across the nation.

I was born on September 8, 1922, at the beginning of the process of the infamous, 1923 hyper-inflationary collapse of the economy of the Weimar, Germany republic. Now, the threat to the trans-Atlantic economy as of this date is a far worse, and virtually immediate threat for as long as current U.S. President Barack Obama remains in the Presidency. That is not even a good guess, but one about to come crashing down upon the trans-Atlantic economies as a whole soon, unless the necessary corrective actions are taken very soon.

As long as the current U.S. President, Barack Obama, remains in office, that already onrushing calamity is virtually unstoppable. In the fewest words possible, either Obama and Wall Street are both put through an urgently needed moral as well as financial reform, or the deadly catastrophe is virtually certain for virtually the entirety of the trans-Atlantic region sometime very soon. At the present date, both this President and much of the Congress have each remained increasingly hysterically impotent, through their own cowardice in refusing to face a future for which immediate remedies do exist, rather than face their own presently systemic errors.

The insanity is, essentially, “all about money.” Dump “Wall Street” and its lunatic swindles, and relatively immediate solutions are available, as could have been the case in the immediate Versailles-crafted crisis which had led into the Adolf Hitler, Germany regime. Who brought Adolf Hitler into power in Germany? Who was to be blamed for the infamous 1929 Wall Street and London crisis? In both cases, it was the financial centers of London and Wall Street, then, as it is now.

The befuddled citizens became too eager to gamble their way into hoped-for riches while gambling in financial speculations, and not enough really caring to do good for mankind, especially since the assassinations of John F. Kennedy and his brother, Robert, for their emphasis on science-driven technological progress at work. That is “why and how” the Anglo-American financial swindlers of London and Wall Street wished the assassinations of John F. and Robert Kennedy. It was not so much because they hated John or Robert; it was the fear of the specter of a possible new President Franklin Roosevelt, or, for some others, such as a new Benjamin Franklin, a genius such as Alexander Hamilton, a James Monroe, a John Quincy Adams, an Abraham Lincoln, a Franklin Roosevelt, or, in an alternative, the selection of the mythical oysters of Warren G. Harding.

Despite all writhings and groanings in protest from Wall Street and London, those are the facts of the matter to be faced, if you, personally, wish to enjoy a prolonged and actually productive and enjoyable life. 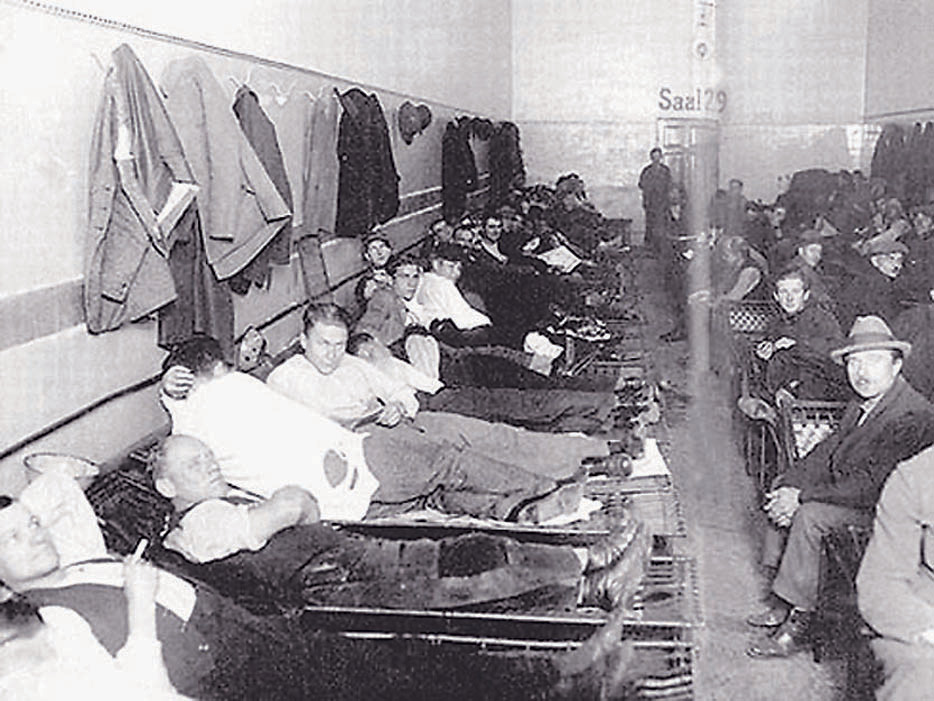 The U.S., under President Obama, is staring in the face of a 1923 Weimar-style hyperinationary collapse of the economy. This photo shows a refuge for homeless and jobless men in Weimar Germany, following the crash.

The center of this crisis is not actually the United States’ present crisis as such. The trend which led the United States (and Europe) into this presently onrushing collapse, was all about Wall Street and London, back then, and right now. What caused it? The immediate cause was the margin of our foolish voters who elected Presidents George W. Bush, Jr., and Barack Obama into office, for what is now approaching a span of fourteen very ugly years.

During the recent weeks, the trans-Atlantic world has been plunging into a general economic breakdown-crisis of the present trans-Atlantic region of our planet. What we are presently experiencing on both sides of the Atlantic Ocean, is a hyper-inflation for as long as the current U.S. President, Barack Obama remains as President of the United States; not only the United States itself, but also the trans-Atlantic region of western and central Europe is now being plunged ever more deeply into the worst economic collapse since the Fourteenth-century plunge into a new dark age, probably one even much worse than that of Fourteenth-century, medieval Europe.

There is an alternative:

If the will is there to take the necessary action, there is an option, under our U.S. Federal Constitution, by which not only can our United States be brought into a genuine economic recovery, but our immediate action under our Constitution, taken now, could bring our republic into genuine recovery from the plunge into darkness which has been under way since the rejection of my July-August 2007 “Home Owners & Bank Protection Act” submitted for adoption by the Federal States of our Republic at that time.

Instead, the members of the U.S. Congress and the Federal Presidency had acted, at that time, and since that time later, to plunge our republic into a spiral downward into policies which have now dumped our republic into what has been the greatest economic crisis of the trans-Atlantic group of nations. Now, as of this past weekend, beginning this past Monday, the economy has fallen, thus far, into the steepest financial breakdown-crisis of modern trans-Atlantic history.

Fortunately, our republic could still be rescued at this time. As many know, I have a record of being among the leading economic forecasters for our United States during the recent decades, as in my uniquely successful forecast of the 1971, Richard Nixon depression, and also the deep 1980 recession, the steep depressions launched by the George W. Bush, Jr. recession, and, now, the economic horror-show brought to you by the Barack Obama depression. Now, the violations of our U.S. Federal Constitution by the Obama government, are combined with Obama’s plunging our United States into a form of depression from which our United States, could never recover in its present form.

The necessary action at this moment, is to prevent the current President of the United States, Barack Obama, from relying upon “dirty tricks” of the type already enjoyed by President Obama, to block that action, the revival of President Franklin D. Roosevelt, from being successfully presented for a vote of the Congress, now.

Without the removal of President Barack Obama from office, the situation of our republic has now reached the point, that the continuation of President Obama in office, would mean the end of our United States under its present Federal Constitution.

Fortunately, there is an alternative, if we act very soon to adopt those needed Constitutional options. The remedy is available, and fully constitutional, if we find sufficient leaders among us with the guts to do what is constitutionally legal, and is already the only visible, constitutional course of action needed to save our nation from what is, now, virtually national economic suicide, unless we act immediately to save our nation. I am now putting myself on the block as one who has shown himself as leading among the leading economists and others of our republic, who is willing, and more than fully qualified to present that option, publicly, here and now.

Consider the following measures most urgently needed at this time.

There are two absolutely indispensable actions which must be adopted and urgently implemented, if our United States can be rescued from the presently accelerating plunge into a virtually hopeless plunge into a general economic breakdown-crisis.

First, we must expel President Barack Obama from office, immediately. There are chiefly two available options for doing so. The first of those two is the President’s impeachment on such available grounds as his violation of the war powers provisions. The second, is removal from office under existing Constitutional provisions of the U.S. Twenty-Fifth Amendment.

Only with the suspension of the President from office, were it likely that the United States could be rescued from what is already the careening into virtual economic death of our United States and its economy. However, the doubtful mental health of this President, and the sheer hatefulness of this ostensibly sick President, show both the case for the President’s urgent removal from office for reason of known impeachable offenses, and the arguably faulty mental health of that President, both of which were a just means for rendering him politically harmless to the general welfare of our republic.

Once we have considered these sources of available remedy as to be used for the rescue of our republic from what would be, otherwise, it’s virtually immediate political death at the hands of President Obama and his British imperial masters, we will have soon secured the measures needed to organize a process of general economic recovery of our republic.

Measures of the Rescue

I. Incapacitate President Obama’s power to sabotage legitimate measures for removing that President from the position of power he might attempt to use to prevent lawful support for the re-enactment of the original Glass-Steagall law as it had been crafted under the guidance of President Franklin D. Roosevelt.

II. That measure should be sufficient to hamstring a corrupted President, to the effect of blocking the use of the power otherwise available to him for reason of his illicit blocking of the necessary, immediate reenacting of the original Glass-Steagall Law.

III. This legitimate action against him separates the legitimate qualities of indebtedness from the forms of speculation associated with such agencies as “Wall Street” and its foreign likenesses.

IV. The U.S.A. law must be improved, to replace the notions of monetarism, that done by a system of U.S. Constitutional Federal credit.

V. Since the residue of salvageable monetary credit in the U.S.A., as within the bounds of the left-over balance of U.S. monetary credit, will not be sufficient to launch a recovery, the medium of U.S. dollar-denominated credit, shall be employed for such included missions as:

A. The recovery of the essential functions of each of the Federal States,

B. The capitalization, in terms of the credit system, of medium- to long-term investments in higher orders of per-capita and energy-flux intensity than are supported presently, with an emphasis on ending the present suppression of the higher intensity of thermonuclear fusion needed for a truly modern economy: a space-age level of intensity of principal applications.