This article appears in the February 5, 2021 issue of Executive Intelligence Review.

Since the developments of this summer, there’s been a great change in the situation in the world at large. Following the period of the Rhodes conference,[fn_1] we had the effects of the negotiations between China’s President and Russia’s President, setting the terms which were later followed up on, with Prime Minister Vladimir Putin in the new agreement with China on the development, the shared development, of Siberia.

This has made a fundamental change in the direction of history—this development, and its consequences. Now, the world has shifted from the former domination by the Atlantic Ocean, as the relationship between Europe and the Americas; and now, between the United States, and the Americas, across the Pacific, into the Indian Ocean, with the nations of Asia, and touching Africa.

This means that the great area of development in Siberia, especially in northern and eastern Siberia, is now opened for its realization: that the cooperation between China and Russia, in the development of this area of Siberia, has produced a fundamental change in the strategic orientation of the planet as a whole. And, hopefully, this is a more or less permanent change for generations yet to come. 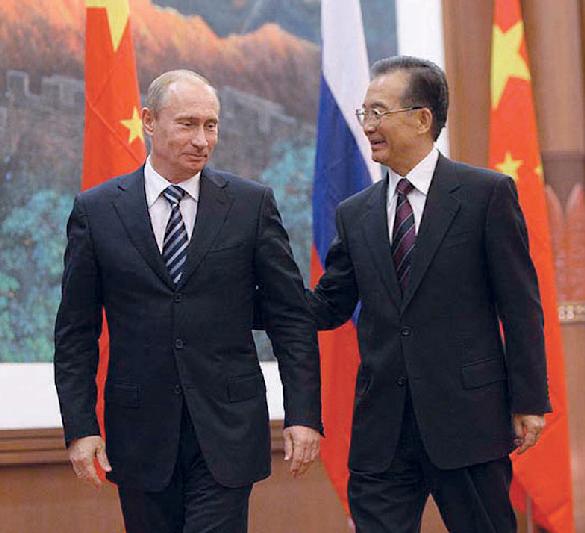 What we have on our hands, are the vast resources of countries such as Mongolia, and Russia—in Siberia, northern Siberia. This is a development which affects the populations of Africa, particularly on the Indian Ocean coast. It affects India, Southeast Asia, China, and Russia. It means that there’s a change in world history from a trans-Atlantic orientation of modern civilization, which has been the case, essentially, since Christopher Columbus, to a new period, where the relationship of the United States, across the Pacific, to Asia and also to the coast of Africa, and to Australia, will be the dominant feature.

Especially in Asia, we have large populations. Russia, for example, has not a large population, comparable to the scale of China or India, but it has a very special role, with the territory of Siberia. China and India: China, 1.4 billion people; India, 1.1 billion people; the comparably large populations of Indonesia, and so forth. This means that the combination of the realization of the development of the raw materials potential, and production potential, in Siberia, is now being combined with the large populations typified by those of China and India; to combine raw materials and the labor force together, not to loot a territory of its raw materials, but to develop that territory, and to develop the peoples participating in the development of that territory.

This is the new world economy, if we escape the dangers that exist now. And we have to shift our thinking to that.

We also have to shift our thinking to something else. 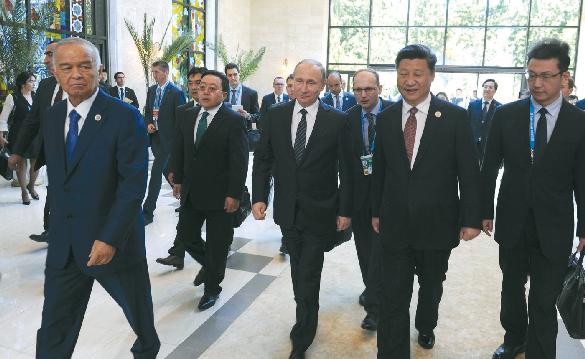 kremlin.ru
After the expanded meeting of the SCO Council of Heads of State in Uzbekistan, June 23-24, 2016, Russian President Vladimir Putin (center) is seen with China President Xi Jinping (on Putin’s left) and President of Uzbekistan Islam Karimov (left).

The future of mankind, even though it’s some generations distant, now, depends upon the development of the colonization of the Moon, as a manufacturing center for building pieces of equipment which will convey man to the colonization of Mars. This will be a fundamental change in the character of the apparent human destiny, over this period of time. And this program, which is now agreed upon, so far, by Russia and China, will be the starting point.

Those in the United States who know their history, who know their strategic history, realize this is a fundamental change. The world is now going to have a trans-Pacific orientation, as opposed to a trans-Atlantic orientation. And that will be for a long time to come. Because combining the populations, which are numerous, but underdeveloped, with a process of development of the raw-materials areas of Siberia and related places, is the solution for the present world problem. And we should look at these things in that way.

We also have to look ahead to Mars, the Mars colonization, which this will help to make possible. It will be several generations distant, before we do that. There are numerous problems, scientific problems, that have to be overcome, not so much in getting to Mars—we already know how to get to Mars—but to get men and women safely to Mars, and back, there are some problems that have to be worked out, on that one.

So, therefore, this will be the character of the coming period of history, provided we get through the present crisis.

But, there are certain parts of the world, which are not willing to accept this. The British Empire, for example. (Australia—yes, Australia will tend to be very much interested in this. Australia has resources, such as large quantities of thorium and uranium, and these resources will be very useful, not only for Australia, but for its neighbors. Thorium nuclear reactors are a very special feature of a development program during this period, and for support of this.) But, in general, you’re going to have opposition from what we call the British Empire, which is not the empire of the British people; it’s an empire which is based on London and the British interests, which is international. It’s the international monetarist system.

And what we’re going into, with this reform, with the Russia-China agreement, is the inception of an alternative to a monetarist system: a shift to a credit system. That is, instead of having an international currency, which exerts imperial power, authority over the power of nation-states, and over their economy; instead of a globalized system, we’ll have a system of sovereign nation-states, in cooperation through their credit systems in the development of the planet. That’s the direction we should be going in. That’s what my purpose is in this.

However, in order to meet that mission—the mission not merely of starting this development, which the Russia-China cooperation begins, including Russia-China-India and other countries—we have to develop the science and technology which goes together with a Mars orientation.

We’re looking to that. In order to realize the objectives which stand before us now, we have to give mankind a new mission—mankind as a whole. The mission is typified by the idea of the Mars colonization. This requires us to make the kinds of changes, in terms of scientific progress, which are needed for mankind’s future existence.

We have many problems on this planet. And we can not solve those problems, extensively, without going into a development of the Solar System as a habitat of mankind. We’re on the edge of doing that, scientifically. There are many scientific discoveries, yet to be made, which will make it possible to act for man’s colonization of Mars. That will be in some time to come. But we need to act now: We need the intention of accomplishing the Mars colonization. We need to educate and develop generations of young people, who will be oriented to that kind of mission. In the coming period, we will have the birth of young people, who will be part of the colonization of Mars, in one way or the other, before this century is out.

We need to give mankind a sense of purpose, developmental purpose, not only throughout the planet, but through the influence of Earth on the adjoining regions of the Solar System, and beyond.

Those objectives are feasible. There are, admittedly, many problems to be solved, scientific problems, which are not yet resolved. We have many questions. But, essentially, we know this is feasible. We know this should be feasible within two or three generations. What we have to do, is give to people, who will be the grandchildren, born now, to give them something to realize. When we’re dead and gone, they will be there, three generations from now, four generations from now. They will be the people who actually colonize areas beyond Earth itself. We need to give them the opportunity to do so. We need to give society, in the meantime, the mission-orientation of achieving that colonization, for our descendants, three generations or so down the line. 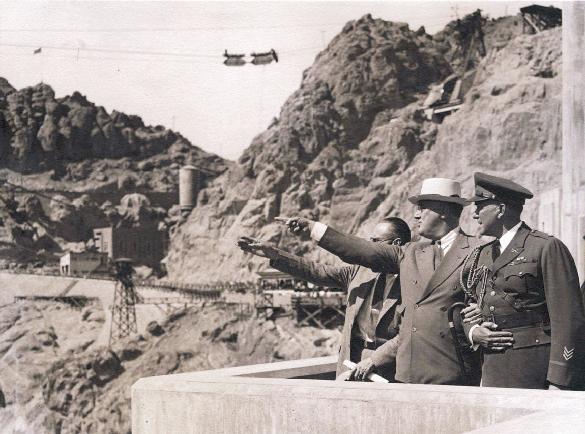 FDR Library
In our Constitutional system, we believe, not in monetarism, but in a credit system, as was the case with President Franklin Roosevelt, shown here at the Boulder Dam, 1935.

The End of the British Empire

The advantage of the United States in this, is that the United States is not a monetarist nation. We do not believe, in our Constitutional system, in monetarism. We believe in a credit system. It is a feature of our Constitution, which is lacking in Europe. And our crucial role, as was the case with Franklin Roosevelt, our crucial role in society, is to promote this kind of change, away from a monetarist system, which is the true form of imperialism. Many people talk about imperialism; they use the label for many things. Mostly, it’s nonsense, scientifically. There’s only one kind of imperialism we’ve known, in European experience during the past 3,000 years, and that is monetarism, as such. And that’s what we have to destroy.

Yes, there is a British domination of the planet, controlling the monetary system, as such, in the tradition of Keynes, and so forth. We have to eliminate that. But, we have to replace it with something, and this means going to a credit system, like that of the United States under Franklin Roosevelt, in which each nation’s credit system is sovereign. And you have cooperation, on a fixed exchange rate, among sovereign economies. We can cooperate in long-term creation of credit, for the fulfillment of these kinds of projects, which the present treaty-agreement between Russia and China signifies. That’s what I’m committed to. I’m looking forward to it. 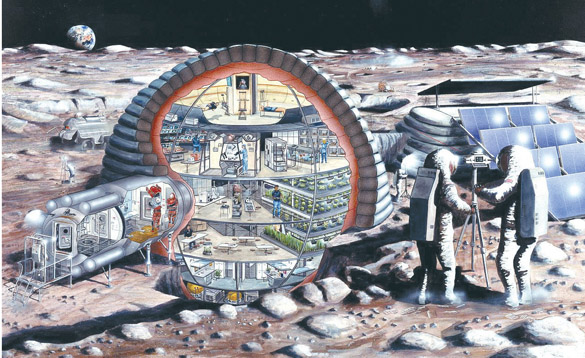 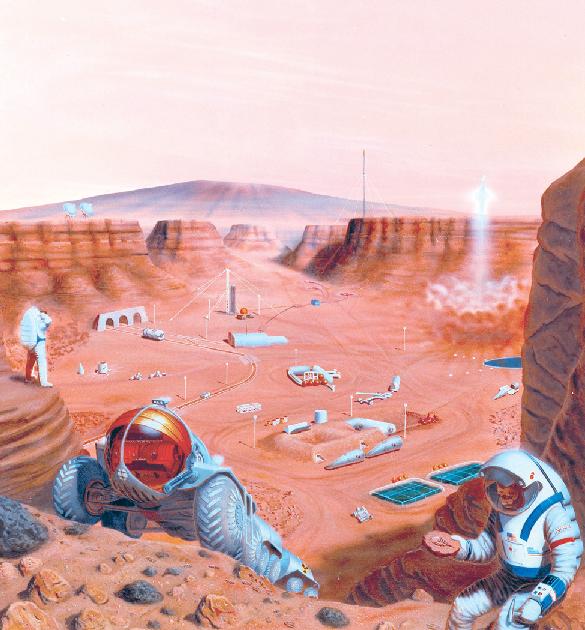 NASA
Artist’s depiction of humans exploring near a base on Mars.

And I think we have the potential for doing that, just now: what’s happened between China and Russia, which is not going to stop there. It’s oriented toward bringing India in more fully. It’s going to mean trying to create a situation in which India cooperates with Pakistan, in defending themselves, both, against what’s coming out of Afghanistan from European sources, in terms of drug-trafficking and so forth.

There are many challenges of that type. But we can achieve that. We can achieve that, provided we come to extend what has been agreed between China and Russia, extend that on a broader scale, as the beginning of a Pacific-oriented development of the planet as a whole. And at the same time, with a mission orientation toward the development of an industrial base on the Moon, which is indispensable for the task of the colonization of Mars.

And when mankind has reached the point, that we have developed the launching of the colonization of Mars, and know it’s going to work, then mankind has gone to an entirely new phase of its existence. We are no longer Earthlings. We are now people of the Universe or, as they say in Russia, the Cosmos.