The following was published in 1987 by the LaRouche Democratic Campaign Committee. 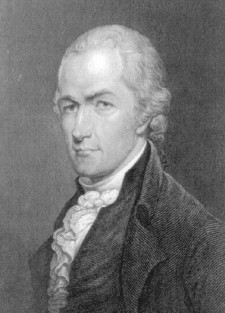 June 22, 1987—Today, Alexander Hamilton, our republic’s first Treasury Secretary and Inspector General of our armed forces, seems to be a giant, and our contemporary political leaders Lilliputians by comparison.

When Hamilton entered the post of Treasury Secretary, our nation’s indebtedness and economy were in a terrible condition, similar in many ways to the economic disaster we are suffering today. Under Hamilton’s program of recovery, our national credit was restored, our banking system became the soundest in the world, and prosperous growth was unleashed throughout most of our nation.

These policies of credit, banking, and economy, which Hamilton outlined in his famous reports to the Congress, became admired and envied worldwide by the name of the “American System of political-economy.”

Under the administrations of Thomas Jefferson and James Madison, Treasury Secretary Gallatin scrapped the American System, and introduced Adam Smith’s free-trade dogmas instead. The result of this change was a ruinous one. Under Presidents James Monroe and John Quincy Adams, Adam Smith’s ruinous ideas were scrapped; Hamilton’s American System was restored. National credit, banking, and economy were saved.

Presidents Jackson and van Buren destroyed the American System, and reintroduced the ruinous policies of Adam Smith. The result of Jackson’s policies was the terrible Panic of 1837.

I have lived personally through a similar experience in my own lifetime. The Coolidge and Hoover use of Adam Smith’s policies, during the 1920s, plunged the world into a Great Depression. Most Americans suffered greatly through 1938, until President Franklin Roosevelt began his first steps toward preparing us for the war with Hitler he already knew then was inevitable.

We could have had an even better economic recovery, if we had not been forced to do this under the costly, inflationary conditions of war. Despite the inflationary costs of full-scale war, the U.S. recovery of 1940-43 was one of the greatest successes in the economic history of the world. All of the prosperity we enjoyed during the 20 years after the war, was a result of the high levels of farming and industrial potential we built up by 1943….

The time has come, to junk Adam Smith’s ruinous policy of free trade, and to return our country to what Secretary Hamilton was first to name “the American System of political-economy.” That is what I intend to do as your next elected President of the United States.