This editorial appears in the April 16, 2021 issue of Executive Intelligence Review. 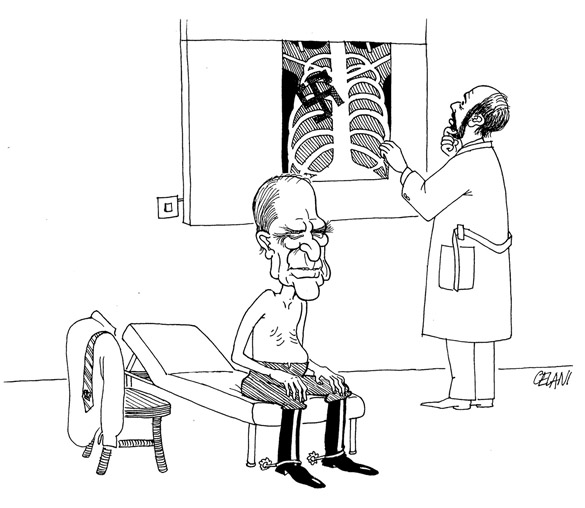 The following editorial regarding Prince Philip was authored by the late Lyndon H. LaRouche in 1994. It is as timely today as it was then. It comes from LaRouche’s introduction to an EIR Special Report titled “The Coming Fall of the House of Windsor,” which is available here.

“In the event that I am reincarnated, I would like to return as a deadly virus, in order to contribute something to solve overpopulation.”

Ladies and gentlemen of the readership’s international jury, we have brought you to this court to hear charges arising from one of the most monstrous crimes committed in all known human history, a crime perpetrated on a vast scale. We present to you here the evidence, that for the past thirty-four years, since its founding in 1961, a wicked organization, calling itself by such names as the World Wildlife Fund, has engaged in willful genocide against the nations and peoples of the sub-Sahara regions of East, West, and South Africa. We shall prove to you, that throughout all of this period, the “kingpin” of this criminal conspiracy has been Prince Philip, also known as the Duke of Edinburgh, and as Consort to the reigning Queen of the United Kingdom.

… You will discover that he has played this role with full consciousness of the criminal intent of his organization’s policies. We show you here, that he has repeatedly stated his desire to bring about the deaths of countless millions of people, to which monstrous crime he has professed to have been driven by the same quality of motive which impelled the Conservative Revolution’s Adolf Hitler: to the purpose of drastically reducing certain human populations of this planet. We show you here the evidence, that he has advocated the policies by means of which this genocide, including that ongoing in Rwanda, has been brought about, In Her Majesty’s Service, through concerted action of the World Wildlife Fund and the British Crown. We present to you the evidence, that he, by the word of his own hand and mouth, with shameless braggadocio, has adopted publicly many of those programs which the World Wildlife Fund and its affiliates have deployed to bring about against Africans, and also others, that genocide which was the Prince’s explicit standing instruction and documented intent.

This evidence will show that he is personally responsible for this ongoing and attempted genocide against the peoples of sub-Saharan Africa, and, also, of other parts of this planet.… There are many other culpable parties: the House of Windsor as an institution; many individual accomplices, simply on their own account; officials of governments such as the [John] Major government’s British Overseas Development Minister, Lady Lynda Chalker; wealthy families, in addition to his own; powerful financier and other corporate interests; highly paid officials of well-financed and complicit charitable and other private organizations; and many others: the list reads, as it should, like a summary of the Nuremberg Trials’ categories of criminals under the rubric of crimes against humanity.…

It is readily and fairly calculated, that the policy-measures which the Prince and his accomplices have adopted, and are implementing currently would, if allowed, reduce the population of this planet from a current level of about 5.3 billions persons, to much less than 1 billion within about two generations, chiefly through the hyperbolically self-accelerating impact of famine and epidemic diseases of persons, animals, and plants. Under conditions produced as a by-product of such concentrated shock to the collective immune system of all higher forms of life, it is by no means assured that any human beings would exist at the close of the coming century, if the Prince and his accomplices were not stopped, and the policies reversed, now. We might hope such a holocaust were not certain, but we dare not risk that wish; in any case, the Prince, his accomplices, and their evil policies must be stopped now….

He has been but the defective instrument of a policy-interest which was defined millennia before he was born, and will be a continuing danger for at least the several decades immediately before us, after he is departed….

Since 1961, Prince Philip has supplied a crucial leading role in heading up this global criminal conspiracy, but he did not originate the underlying policy. That policy we trace immediately to the 19th-Century Darwin-Huxley circles and their role in creating the Eugenics network which, among its other productions, sponsored the Hitler dictatorship in Germany, and also its satellite, Margaret Sanger’s Planned Parenthood organization. Prince Philip’s role should be seen as continuing that same tradition which produced Hitler earlier, and to carry that criminal tradition to new extremes, of which some television fans might say, ‘‘To boldly go where no man has gone before.”