This article appears in the August 6, 2021 issue of Executive Intelligence Review.

What is the Good?

The following is an excerpt from Lyndon LaRouche’s keynote address delivered at a conference of the International Caucus of Labor Committees on December 29, 1985. The video excerpt was played to open Panel 1, “The Economic Effects of Green MAD—Mutually Assured Destruction” of the July 24, 2021 Schiller Conference, “There is No ‘Climate Emergency’—Apply the Science and Economics of Development to Stop Blackouts and Death”. The full transcript of Mr. LaRouche’s speech. 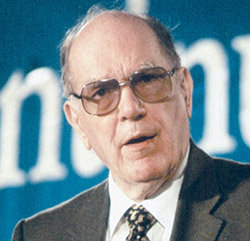 In our concern to define the exact nature of this self-interest, we search, as did Socrates, for a definition of the Good: What is that, which served in what manner, corresponds to this self-interest? What can we be sure will be beneficial to humanity, in present and future generations under circumstances beyond our foreknowledge? How can you know that what you do today, can be judged as good?—a contribution to the Good—ten, twenty generations from now? How can you know that?

You cannot simply say, “I do what my father and mother told me, or what my peers tell me,” or “what the current opinion poll tells me,” and that, “By acting in such a manner, I believe myself to be good, my friends and neighbors and peers believe me to be good, and who are you to gainsay it?” Such definitions of the Good are worthless!

What is the Good, as if it were known only by one person, in defiance of the contrary opinion of every other living person? And how could that Goodness be proven? That is the question which preoccupied Socrates: What is the Good? Man is properly motivated by nothing but the love of the Good! That love of the Good, and its efficient self-service, is the essence of individual self-interest.

Already this begins to make clear to us, even before the question of the nature of the Good is satisfied, that we as individuals are and must be instruments of something universal; that we, as the microcosm of the universe, must become an efficient agency of the macrocosm—of the development of something larger, permanent, all-encompassing, and encompassing in particular the condition and work of all humanity; that our self-interest lies not within our skins—or only as what, within our skins, is necessary to the work of our self-interest. Our self-interest lies in the Good, in something universal. That is our work; that is our self-interest. And that, some people have understood.

What is the Good? How can we observe the Good, empirically? Well, first we look at the difference between ourselves and the beasts. And then we have to study economics; not the kind that is preached in Washington, or in the universities today, or by the so-called economics profession … but physical economy—real economy, the power of a species, or of an individual, to produce the material and cultural conditions necessary for the existence of that species.

What’s the difference between us and the beasts? A very simply observed distinction—at least historically, if you can’t observe it in the current crowd in Washington.

In the earliest condition, as asserted by the all-knowing anthropologists of mankind, it required, on the average, on the order of ten square kilometers of the surface of the Earth to sustain one individual, in a very miserable condition of life. The average age, in terms of life expectancy, of that individual, would be considerably less than 20 years. The existence of these small groups of individuals were sort of extended, mother-dominated family groups—the old mother of the tribe, probably 28 years old, would dominate a mass of little children, squabbling children who behaved and thought very much like beasts. The existence of these little groups would be extremely precarious. And there could be not more than approximately 10 million such miserable creatures, living an existence more precarious than that of a tribe of baboons.

But today, we have approximately 5 billion persons, who, apart from liberals, live on a much higher level of existence than the baboons.

We got there by what we call, today, scientific and technological progress, which takes the form of scientific discovery, by which we are guided to modify our behavior. That is, we do not behave according to what Adam Smith prized as “original and immediate instincts,” but rather we suppress those bestial, baboon-like instincts, in order to bring forth some other quality which we have within us: the quality of creative reason, the power to look up to the heavens, and construct a solar astronomical calendar, as opposed to the kind of lunacies which came out of Babylonia. This is done very simply: Man looked up, took some sticks or stones, and did the obvious. He took the angle of the sunrise, the angle of the sunset, and the highest position of the sun during its midday course. Elementary!

And then, man did something also very obvious: He stayed up at night—a thing which, I tell you, is essential to wisdom! You have to wait until the world is asleep, and then think about what happened; and then, the next morning, you’ve got the world off guard. That’s wisdom! You stay up at night, and you take these sighting positions, of the sunrise, the sunset, and the midday position, and you observe, to which constellations and stars do these observations correspond. And so, you record these with stone, like those megalithic constructions which were made and dot Brittany and Ireland and Britain, typified by Stonehenge. You can count the days by the Sun, not by “lunacy”—you count the number of days. In five years, you discover, that in the cycle of the advance and regression of the position of the Sun—and man would obviously use the equinox for the dating of this calendar—that there are 365 and a quarter days, approximately, in one cycle, called one year. And then you discover, by the same means, other cycles.

A beast can’t do that—nor can a liberal! Only a human being can do that. And the earliest known cultures, dating 6-, 7-, 8-, 10,000 B.C., developed a solar astronomical calendar, which is more accurate than anything that existed up into the 19th Century; and also, which far surpassed anything created from the founding of Sumer and Ur in the Biblical land of Mesopotamia—which is a Biblical fraud, written by Babylonians who rewrote the old Jewish writings, under orders of Babylonian Chaldean priests.

So, man is capable of this: capable of reason, capable of seeing lawful ordering in the universe, and using the knowledge of that lawful ordering to reform and change his own behavior. And in this way, by making reason—rather than Smith’s “immediate and original instincts,” bestial qualities—the characteristic of human behavior, we achieve what we call scientific and technological progress. We not only increase man’s power over nature, by bending man’s will to the law of reason in the universe, but thereby, by making the mind, not the bestial aspect of humanity, but the mind into the personality, the value and the identity of the person, we elevate the moral condition of humanity. We not only increase the human population, but we elevate the possible moral condition of mankind—if we don’t have oligarchs to ruin the process—usurers, Venetian bankers, and the like.

The republic is the only natural condition of mankind. This was proven by Dante and his followers, that the only natural form of republic, is a totally sovereign nation-state—not subject to the IMF, or the World Bank, or UNO [United Nations Organization]; a sovereign nation-state, a republic, which is based upon the employment of a literate form of common language by its citizens—a literate form of language which imparts to those citizens, in the words of Shelley, “the power of imparting and receiving profound and impassioned conceptions respecting man and nature”; conceptions organized in the form of reason, the form of reason as exemplified by the Socrates of Plato’s dialogues.