This transcript appears in the October 15, 2021 issue of Executive Intelligence Review.

On January 12, 2002, speaking to a California workshop recruiting young volunteers to his campaign, Lyndon LaRouche reviewed the six years since his “Triple Curve Collapse Function” had been first introduced. This is an edited transcript of that presentation.

At the end of 1995, I was a guest at a Vatican conference generally on health care. And as a contribution to the record of that conference, I produced a short report on related problems, and submitted a diagrammatic representation of the essence of my report, as to where the world economy—Europe, the United States, and elsewhere—were going; and how this would affect health care. It was the famous Triple Curve (Figure 1). 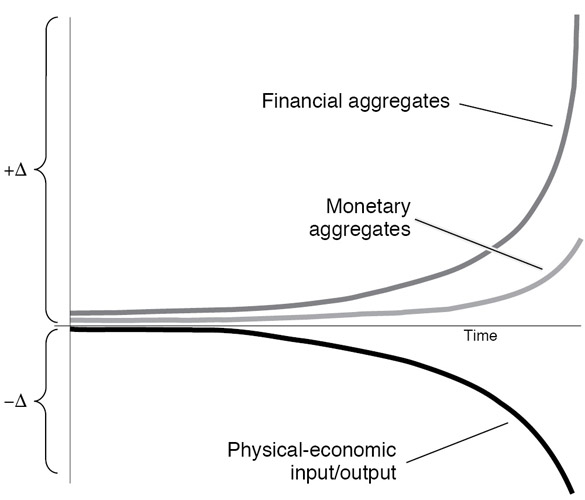 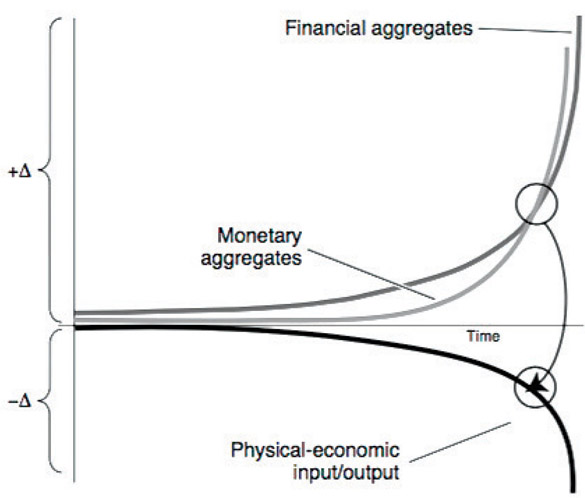 As you recall, if you have looked at the Triple Curve, there were two successive versions of that. One, was the one I produced in 1995 for this Vatican event, which I then reproduced as a key feature of my 1996 Presidential campaign. The second one was done on the basis of the 1999-2000 study of exactly where the Triple Curve function was going. I indicate the “crossover,” which is where we are right now (Figure 2).

Let me just remind you of this, and then get to what my point is here. You recall the Curve. The top [curve] was a sort of hyperbolic, self-feeding growth of financial aggregates—what might be called “shareholder values,” nominal shareholder values as accountants would account for them, or the equivalent. Then you had a second [curve], which was the monetary expansion, both by Treasuries and Central Banks and so forth, which was feeding the money-flow in, to help pump up the growth of this financial bubble. Then the other tendency, which I dated from 1971, is the accelerating decline in real physical output and consumption, in terms of productive potential per capita and per square kilometer. That’s the bottom curve. The bottom curve is down, the two top curves up.

The second version—in which I dealt with the phenomenon of the “importer of last resort,” last year—was based on the fact that, as we emphasized in various reports done by Richard Freeman and others, we’d reached the point, already during the period of the 2000 election campaign, that we were in a Weimar type of hyperinflationary process. 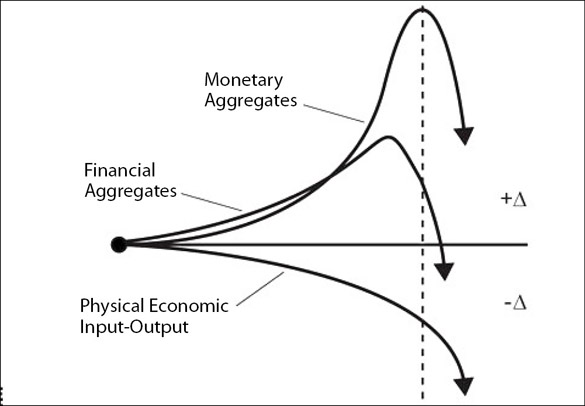 EIR
LaRouche’s Triple Curve collapse function is triggered by a shrinking real-productive economy while financial (debt) and money-printing volumes grow geometrically (see Fig. 1); there is an ominous “crossover” when the money printing escalates (since 2008) even faster than the debt it’s trying to support, and both push down the economy even faster (see Fig. 2); until finally, when masses of debt start to default and collapse, hyperinflation hits currencies (this figure).

Remember that in Germany, the hyperinflation really started several years before—about 1921—before the famous 1923 blowout of the Reichsmark. The problem grew gradually. There was an increase, an inflationary increase in monetary-financial aggregates, largely debts, debt rollover, especially debt to the predatory Versailles Powers on war reparations, or other reparations of Germany. And then there was the monetary printing-press operation, which was feeding the ability of Germany to pay, and create the financial assets for the foreign creditors. Thirdly, there was a process of looting Germany physically, internally, and even shutting down firms, to sustain this monetary-financial process.

In the period somewhere between late May and July, 1923, the amount of monetary aggregate which had to be put into the system—that is, printing-press money—which had to be put into the system to roll over the existing financial assets, was bigger than the amount of the financial assets being rolled over. This was being done by financing methods for the printing of money, which resulted in a major collapse in terms of the physical economy of Germany of that time: production, output, consumption.

So that led, from the beginning of Summer into October-November [1923]—the Reichsmark virtually disappeared. It had to be brought back from the grave at a later point.

So, what I identified, is that as of the Spring-Summer of the year 2000, it was obvious that the United States, and the world economy associated with the United States, had entered a phase comparable to exactly this condition which had occurred in Germany in 1923, but this time on a world scale, with a world economy, not a German economy.

This was signified [as follows]: as I drew the second [monetary aggregates] curve, I said, “Now you’ve reached a point, where the rate of the monetary aggregate required to keep these curves functioning, is greater than the amount of financial aggregate which is being sustained by [this] printing-press money.” At the same time, the effect of this, this monetary-financial process, is to accelerate the collapse of real industry, in terms of fake industry.

Now, you’ve got a good example of this in terms of the so-called New Economy. The New Economy, which took off in 1995, was a hoax, created by the government—or, with the blessing of the Clinton-Gore Administration—in which they argued two things. First, that we were in danger of a year-2000 blowout of the computers, which wouldn’t know what to do when they reached the end of 1999, which is the old two-digit year code [problem]; and the accountants tried to figure out how to get to the year 2000. And they would tend to think that they [the computers] would go back to the year 1900, not to the year 2000. So that would really screw things up—that was the argument.

And of course, it was true, that when they made Cobol [a computer code language] into a system and developed it in the course of the 1950s and early 1960s, they kept this two-digit year code in there. And when they assembled more and more programs later on, these programs had this Cobol thing locked in there, as a general part of the way they built these programs. So the programs that computers were using were full of this two-digit date thing. Especially, you’d have government systems, for example, which would date, in the creating of accounting systems, back to the 1950s, when computers were first used.

So what they did, is they said, “We’ve got to stop the Y2K Cobol crisis. The whole world economy is going to vanish on January 1, 2000,” because of this Cobol problem inside present-day computer systems and the programs installed in them. So they had to invest a vast amount of money, of course—they said—in changing all these computers of government and private concerns. So therefore, they had to pour credit into this.

Then they said, “Well, if we’re going to change the machines, going to change the programs, why don’t we put out better machines—faster, more efficient machines?” So there was a vast increase in the marketing of computer hardware, software, and so forth. A big inflation in that area. It was all pumped up by the Federal government, by the banking system internationally. They created the myth that the production of information-emission from these computers—this circulation of information—was itself, intrinsically, an increase in wealth.

And therefore, they built up this tremendous bubble, which was not based on the actual sales or net income of these companies; because what they counted as net income, was the growth, the appreciation on shareholding. So a company that would make no profit, [but] because its stock was selling, and because it was being bid up in price on the market, would show a capital gain—a financial capital gain—in the current price of the share, even though the company in which this share was created, was operating at a net loss.

And they invented a lot of accounting tricks and fakery, to cover up this kind of thing; where they would show—someone’s profit on a shareholding would then be shown as an asset for the company. And therefore, this would then be turned around and shown as growth in the company; even though in terms of the operation, the operation was not making any money, but was operating at a massive loss.

So now, then, comes the year 2001. The New Economy collapsed. It was substantially wiped out.

So we shut down the U.S. economy. We gave people synthetic jobs—that is, make-work jobs—to keep them quiet. We gave them very cheap jobs, very low wages in real terms, but we gave them the opportunity to work at three jobs a week; maybe not full-time jobs, but one, plus, plus jobs per week per person. We put virtually everybody in the family to work. We put the children on the streets—the younger children who couldn’t work—virtually on the streets, or “latch-key children.” We took all decent education away from them. So they came out of these schools, not qualified for any serious kind of work, with no cultural development—social studies of some crazy kind—but essentially useless people as members of the labor force. That was a fraud.

We shipped the jobs overseas. We shipped the national income overseas. How did we get national income? We stole it! We used the IMF and other means to pressure countries to sell things to us, by reducing the price of their currency, so we could buy their goods cheaply. We imposed debts on them, by these manipulations, so we could loot them. And the argument was, “Look, we don’t have to work anymore. We’re going to use our power intelligently, our financial power, our control of international financial institutions; we’re going to loot the world, and we’re going to get along just fine, in this New Economy, this new way of life.” And so forth, and so on.

So what’s happened now, is we’ve gotten to the point—and you can see it in the figures—that all these financial blowouts beginning 1997—I forecast this in 1960, that this would occur; 1997 it occurred. It was called the “Asia crisis.” It wasn’t an Asia crisis, it was a crisis of the system, which was beginning to disintegrate. Then they invented this fakery called the [Russian government] GKO bonds, which were really junk bonds, against Russian debt. They blew out in 1998. And the entire world system has essentially been limping along, in the process of collapse, ever since 1998.

And what’s been keeping it going, is largely this engine of printing currency, like monetarizing Japanese yen—zero-interest loans, overnight loans—monetarizing all kinds of lending of this type. Pumping that lending at almost-zero interest rates, or very close to that, into financial markets, trying to drive the financial markets up; but at a time—especially since the year 2000—when the amount of money which the monetary mechanisms must put into the economy, to pump up these financial markets, is greater than the amount of financial growth that the economy generates as a result of this monetary pumping.

In other words, we’re in exactly the kind of mechanisms, on a global scale, that Weimar Germany was, in the Summer to Autumn of 1923. And we’ve been in that state of affairs, since approximately the Summer of the year 2000—as Richard Freeman and others have produced the figures which just show this comparison.