This article appears in the November 19, 2021 issue of Executive Intelligence Review.

The first panel of the Schiller Institute’s Nov. 13-14 Conference, “All Moral Resources of Humanity Have To Be Called Up: Mankind Must Be the Immortal Species!” was opened by the panel’s moderator, Dennis Speed, with a video excerpt of remarks from the late economist and statesman Lyndon LaRouche, a co-founder of the Schiller Institute, one of the foremost thinkers of the 20th and 21st Centuries. Mr. LaRouche delivered those remarks at the Schiller Institute’s July 2-3, 2011 international conference in Rüsselsheim, Germany. (The July 15, 2011 issue of EIR provided extended coverage of that conference. The transcript of Mr. LaRouche’s full 2011 presentation is available here.) Panel 1 of the Nov. 13-14 two-day conference was, “Can a Strategic Crisis Between the Major Powers Be Avoided?” 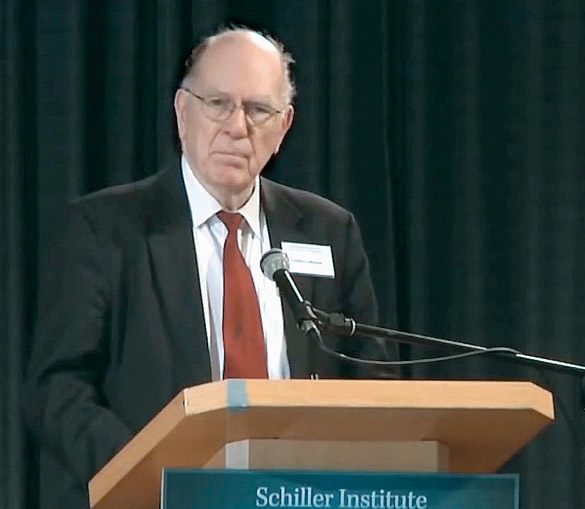 This is truly the most important of all strategic questions we have to face today: the fact that the human species is absolutely unique in its capabilities. There’s no other known species in the universe, ever known to have existed, or could exist—even though we have not fully explored, of course, the Crab Nebula or similar parts of the great galaxy which we’re involved in, called the Milky Way. There may be many species with cognitive powers out there. The Solar System of which we are immediately a product, although always under the control of the galactic processes—and we know a good deal, today, about those kinds of things—our organization in the United States has spent a good deal of effort on concentrating, inclusively, on just this question.

And yet, we’re talking about billions of years of this galaxy, during which all living processes known to us have come into existence. And all life is creative, but there’s a sad part: that over 95% of all known living species have been rendered extinct, as failures, in their time. The question, therefore: Why, in these times, when we have entered a period in which there will be more great kills of living processes, at this phase of the movement of the Solar System through the galaxy, why should we be so presumptuous as to imagine that human life is not about to disappear as the dinosaurs did in the last great kill?

What is there about human beings that says they’re not just another animal species, ready to get to the chop in the course of their time?

The answer is a very little-known question. Most people don’t have an inkling of what the answer is! As a matter of fact, our societies are run on the basis of people who have no inkling what the human species is! All they can come up with is an explanation of some kind of an animal, with animal characteristics of pleasure and pain, and things like that, that might control the behavior of this animal.

So why should we expect that we have a right to claim that the human species is going to survive the approaching point of a great kill in the course of the movements of the Solar System up and below and around the galaxy we inhabit? How do we know that this 62-million-year cycle is not going to take the human species away, as it’s taken so many away before? And then, before that, and then before that?

What is there in us, that is not in other living species known to us? That might, somehow, miraculously, pronounce a destiny for our human species which we grant to no other living species? The name for that specific quality, which we know in the human species, which does not exist in any other known living species: There’s a quality of creativity, which is absolutely unique to mankind. And if you’re not creative, and if you don’t understand creativity, you haven’t got a ticket to survival yet! Because creativity won’t save you, unless you use it.

All you have to do is adopt a zero-growth policy, a zero-technological-growth policy: I can guarantee you, your extinction will come, delivery on time! I don’t know what the time is, but it’s soon, in terms of geological and galactic time.

Now, how often do you hear the question which I have just posed discussed in policymaking of nations? Here we are, the most important thing for any species to consider: its extinction, and the possibility of not becoming extinct, a possibility known to us, or can be known to us, if we’re not stubbornly opposed to learning it, which is called human creativity, a phenomenon which does not exist as human creativity, as willful creativity, in any other known species that ever lived, to our knowledge.

Dennis Speed: For those who would like to know more about the works of Lyndon LaRouche, we invite you to acquire the first volume of Lyndon LaRouche’s Collected Works, which is available from the LaRouche Legacy Foundation. We’ll say more about this during the course of the conference. It contains works such as So, You Wish to Learn All About Economics?; There Are No Limits to Growth; and other works.