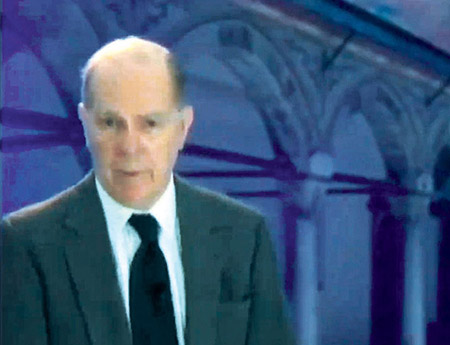 Winning the Ecumenical Battle for the Common Good

The two focal points of this conference will turn out to be, at the end, as they are at the beginning, the issue of Eurasian recovery, Eurasian development, as the pivot for world recovery, including the role of Russia as a very special part of any such recovery effort, and the relationship of this Eurasian commitment, to the contrasting situation of Africa.

In other words, to understand the world as a whole, in the simplest terms of reference, look at the possibility of what we can do in Eurasia, and then look at the needs of Africa, in order to see humanity in its wholeness. Those who have the means to lift themselves up, and those on whose behalf, in the larger term, they must act, to lift them up too. Because the idea of the general welfare, while it’s a notion of government of each nation, also must be a notion of the relationships among nations of the world.

The Idea of ‘the Good’ in the Year of Augustine

The republic is the only natural condition of mankind. This was proven by Dante and his followers, that the only natural form of republic is a totally sovereign nation-state, not subject to the IMF or World Bank or UNO; a sovereign nation-state, a republic, which is based upon the employment of a literate form of common language by its citizens—a literate form of language, which imparts to those citizens, in the words of Shelley, “the power of imparting and receiving profound and impassioned conceptions respecting man and nature”; conceptions organized in the form of reason, the form of reason as exemplified by the Socrates of Plato’s Dialogues.