This article appears in the March 11, 2022 issue of Executive Intelligence Review.

Behind Russia’s Catastrophic Liberal ‘Reforms’: A Fatal Pattern of Policy-Shaping

Lyndon LaRouche wrote this essay as the preface to the book, Genocide: Russia and the New World Order (October 1993-August 1998), A Strategy for Economic Growth on the Threshold of the 21st Century, by Dr. Sergei Glazyev, published in English translation by EIR News Service in December 1999. Dr. Glazyev is a member of the Russian Academy of Sciences and is currently the Minister in Charge of Integration and Macroeconomics, Eurasian Economic Commission. On February 19, 2019, he wrote a Russian language eulogy for LaRouche, saying: “Lyndon LaRouche has left us. He was a titan of thought, a man of incredibly encyclopedic knowledge, great soul, and love for humanity.” 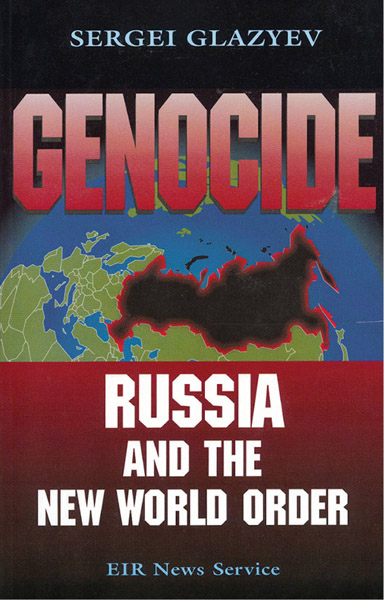 At the time the English edition of Dr. Sergei Glazyev’s book goes to the printer, we have reached the point of successive economic collapses of not one, but, now, both of the principal superpower alliances which had dominated the post-Franklin Roosevelt world. At the present moment, there is no scientific way of foretelling on which week the present International Monetary Fund-dominated world financial system will collapse, but it is nonetheless certain, that that system is doomed, and that soon.

For the period immediately ahead, we can be certain of only two facts about the world economy as a whole. First, we may be certain, as many leading bankers and others are certain today, that the present, hopelessly bankrupt IMF system, is at the brink of either one, or a series of precipitous systemic, fatal, chain-reaction implosions. Only the exact date and choice among several probable detonators of that general collapse remain uncertain. Second, we know, that either the present world financial system will be put into bankruptcy-reorganization, that by joint action of some of the world’s leading nations, or the system will simply disintegrate of its own accord. In the latter case, the result will be the unleashing of a virtually global, economic chaos. A collapse of the latter sort would plunge most, or all of the world into something echoing Europe’s mid-fourteenth-century “New Dark Age,” perhaps for decades to come.

In the case of the 1989-1991 disintegration of the Comecon and Soviet Union, it is arguable that many among the contributing causes for that collapse were of a voluntary nature. Which were those mistaken choices of action and inaction, by the Soviet leadership, is still being debated; but, the fact that some grave errors of choice occurred, is not debatable. At bottom, whatever those voluntary errors of leadership were, the essential fact is, that the collapse of the system was ultimately not simply the result of some isolable bad individual decisions; the bad decisions were the outcome of a pervasive systemic flaw within the decision-making characteristics of the system within which particular decisions were made.

The same judgment must be passed on the presently collapsing world financial system: the so-called “IMF system.” After all secondary questions are taken into account, the reason the present world financial system is now disintegrating, is simply that any system of the special functional characteristics described by my “Triple Curve,” the characteristics of the decision-making of the present IMF system, must cause that system to disintegrate.

Therefore, we must say, that the reasons for the presently ongoing collapse are of a systemic, rather than an accidental nature.

For example, it was President Richard Nixon’s follies of August 1971, which launched what has been demonstrated to have been an inherently ruinous “floating-exchange-rate monetary system,” the present IMF system. It might seem that any of Nixon’s successors among the leaders of the G-7 nations, could have, theoretically, reversed the 1971-72 blunders of Nixon, George Shultz, et al. In fact, they did not do so; instead, the later decisions made, simply made things much worse than Nixon’s blunder had done. When one takes into account the powerful interests which usually control the election and downfall of governments, perhaps the bottom line is, that those officials simply lacked the ability to make anything other than foolish decisions on these matters of long-term trends in monetary, financial and economic policies.

The reasons the Atlantic powers did not reverse the terrible monetary-policy blunders of 1971-1976, lie in the systemic, policy-shaping characteristics of the dominant factions within that social formation fairly identified as the London-led “Atlantic establishment.” It was not any one policy which has steered the present IMF system from the folly of August 1971 to the fatal “derivatives bubble” crisis of today. The fault behind the onrushing doom of the world’s present financial system, lies not with individual policy-decisions, but in an ultimately fatal pattern of policy-shaping innovations. Typical of what have proven to have been the most crucial among such follies, were those introduced by the trans-Atlantic powers under the influence of the long reign of the Mont Pelerin Society’s British Prime Minister Margaret Thatcher.

That point should be repeated. The fault lies not in any particular decision, as such; the fault lies in the social and ideological characteristics of today’s “Atlantic establishment,” just as the collapse of the Soviet system flowed from the ideological and related characteristics of its establishment. The fault lies in the habituated, ideologically charged pattern of changes of decision, an ordering of changes which shape the “planetary” orbit of the net effects so produced. We say, therefore, that the fatal trajectory of events is, like a planet’s orbit, essentially systemic, not the result of several isolable policy-decisions on direction made along the way.

Thus, in both doomed cases, the fallen Soviet system, and the presently doomed IMF system, the ultimately inevitable doom of the system lies in what may be viewed as the characteristic behavior of the species—the characteristics of that species of system. 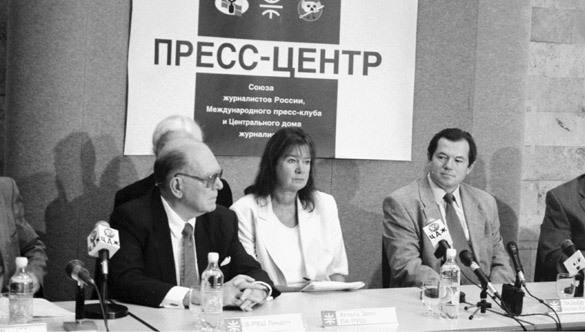 The Human Ability To Change

The rabbit who is killed by the automobile, had the physical ability to avoid that risk; it was the characteristic of the rabbit’s nature, to choose the new decision which then doomed it to serve the pleasure of the waiting crows. The skilled hunter relies upon his or her knowledge of the inhering follies of the intended prey’s inhering behavioral traits, just as the skilled military tactician regularly outflanks his unwitting intended prey. Animal species can learn, but they can not improve upon the axiomatic assumptions which govern their behavioral propensities. The doom of any lower species is, therefore, systemic, rather than the accidental result of the animal’s isolated decisions.

The doom of social and political systems, lies not in any one or several among the decisions leading into that doom. Human beings, and therefore societies, have the ability to change the characteristics of a society’s mass behavior. The cause of the collapse of a society, is, rather, those flawed, axiomatic habits of decision-making which the system itself stubbornly refused to change. So it was with the Soviet system; so it has been with the 1971-1999 pattern of decision-making by the IMF’s establishment.

Therefore, in examining the self-inflicted doom of once-powerful political systems, we must focus on both the similarities and qualitative differences between the lower animal species and human beings. The difference lies in the rational options always implicitly available to human beings. Therefore, the crucial issue is, the potential of societies, using reason, to survive, by recognizing and correcting the follies of their own seemingly built-in, axiomatic assumptions.

The analogy for such fatally flawed decision-making by the two presently doomed systems, is the problem posed by the way in which the mathematician’s adoption of any specific set of definitions, axioms, and postulates, dooms that mathematician to adopt only those theorems (e.g., policy-decisions of practice) which are consistent with his (often unwitting) axiomatic assumptions. If his opinions are shaped, like theorems, by the wrong set of definitions, axioms, and postulates, every crucial theorem he develops will be wrong. Such errors are systemic, and neither accidental, nor transitory in nature.

If that kind of policy-shaping error is adopted by a society, that society is ultimately doomed by its stubborn acceptance of its own “generally accepted ideas.” This defines what we must regard as the true cause of a systemic collapse, as distinct from a temporary collapse which might be caused by a series of accidental mistakes in choice of policy. That is the difference between a systemic economic crisis, such as the present world crisis, and a mere temporary, cyclical crisis in an otherwise successfully ongoing economic system.

A Concert of Action

So, Dr. Sergei Glazyev and I, as others, have been impelled to study the systemic, rather than merely accidental reasons for the apparently imminent doom of both the Soviet system and its neo-liberalism-dominated Russian successor. For me, that is the most important implication of his book. On the problems and options presented to Russia’s economy today, he is an exceptionally qualified insider. Such Russian specialists must sort out what was valid in the former Soviet system, and distinguish that from the causes of the systemic collapse of both that system and the doomed liberal experiment which followed.

Similarly, I, like any serious patriot of the present-day economies of the USA or western continental Europe, must define both the virtues and follies of post-Franklin Roosevelt U.S. economic systems.

We have come to the point, that the present IMF system is hopelessly doomed to an early end. Either we change the system fundamentally, or we must expect a plunge deep into a prolonged period of vast devastation. That catastrophe few nations, if any, were likely to survive. To prevent that, we must act, very soon, to change the system systemically. We must sweep aside, and replace, many of what have become, over the interval 1971-1999, the most passionately adored among the post-1971 changes in the present world financial, monetary, and economic system.

To save civilization, we must act immediately, to change the present world system in a most sudden and radical way. Otherwise, all of us are berthed on a sinking world-economic Titanic, with no lifeboats available.

To make such radical and sudden changes, two preconditions must be satisfied. First, the USA must find a powerful array of accomplices among nations of the world. These nations, acting in concert, must make those sudden and sweeping changes, which eliminate immediately the present IMF system, and introduce its healthy replacement. Second, we could not bring such agreement about in a timely fashion, unless the authority of successful precedents from the pre-1971 period could be invoked as proof of what might work to replace the presently doomed, post-1971 evolution of the IMF system.

The nations which must be brought together to make such a quick decision, must be a group of sovereign nation-states representing a majority of the world’s population. This includes, together with the President of the USA, the sovereign governments of Dr. Glazyev’s Russia. China, India, at least some nation from western continental Europe, plus other states of Eurasia, Africa, and the Americas likely to rally to the same effort.

On this account, the lessons of the successful experiences of those nations’ past must be taken into account. Dr. Glazyev’s role, his background as a professional economist, and his several important roles as a leading youthful, upcoming figure of a Russia whose participation is essential to the USA and other prospective partners, make his knowledge and opinions of special included importance to all those, in every nation, who must be assembled to establish the urgently needed new world monetary system.

On both sides of the former divide, I, for example, for the USA, and Dr. Glazyev, for example, for Russia, these are the types of issues which serious policy-shapers must consider, in searching for happy ways out of the presently threatened common doom of both former strategic systems. The English-speaking reader, including, one would hope, President William Jefferson Clinton, should view Dr. Glazyev’s book with that thought in view.