The Basis for Belief in Optimism

The Plenary Session of the Schiller Institute’s April 9, 2022 conference, “Establish a New Security and Development Architecture for all Nations,” began with remarks from the late economist and statesman Lyndon LaRouche, known throughout the world for his unique ability to speak to all people about those values and ideas that unite us all. This is the edited transcript of excerpts from a speech Mr. LaRouche gave in 2003 to a conference in New York City devoted to world education, with a specific emphasis on Pakistan. 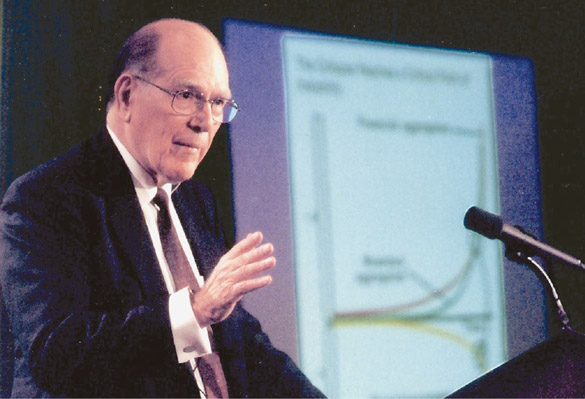 If you look around the world today, you have two pictures, one, a fearful one, the spread of war, the threat of war, terror. On the other hand, in Asia in particular, Eurasia in general, there’s a new movement, a new cooperation among the nations of Asia, steps toward cooperation: Pakistan, India, China, Southeast Asia, Iran, nations of central Asia, Russia, moving toward Europe. The world is in great crisis, great economic crisis. The financial system is in danger of collapse, and will collapse. But we can fix that. Governments have the power to fix those kinds of problems, and life will go on. The problem, above all, is the mind of the people of the world.

And is the case of Pakistan, as you have emphasized with your program, the support of education program; the problem is—look at the faces of the poor of the world, not only in Pakistan, but the poor of India, the poor of Southeast Asia. And you look at the eyes of poverty, or poverty in Africa. What do you see? You see a mind which is a human mind, which is capable of doing everything every other human mind can do in general. But you see that the lack of education, the lack of hope, the lack of connection, is like a prison. It is not only a prison in denying them the knowledge they need to have the skills to produce, but it’s a psychological prison, a spiritual prison. They don’t know the world in which they live. The world in which they live in the large is a stranger; it’s a frightening stranger.

And so therefore, when it comes to the kind of project with which you are concerned here tonight, the project of education for the poor, especially of Pakistan, who otherwise would not have the education that you’re working to provide for them. The spiritual goal is almost as important, or maybe more important, than the economic goal.

I know that in the period of World War II, when the United States had gone through a great period of pessimism, in the 1920s and the early 1930s, we began to come out of that pessimism during the period of the 1930s and the war. We were able to meet the challenge of war, and the challenge and the hope of peace which Roosevelt represented, because there was optimism in the people. I saw things happen in wartime, under wartime conditions, which expressed optimism, optimism. People would do what they thought was impossible, because they were optimistic. And the function I think of education, especially education in poor countries, is to give the child the basis for belief in optimism, for the belief we can do things, the belief that by cooperating we can make things different, we can change things for the better. And that’s what I look for.

I am privileged now because of my work internationally in dealing with countries in South Asia, Southeast Asia, East Asia, Europe, elsewhere. I see that there is a great possibility of optimism. But then I see when I look at the poor countries, such as Pakistan and India which have many poor, even though many are not poor, but many poor. I think what will happen to the effort to build peace in this part of the world, if we leave the mass of the population, the majority of the population, ignorant and poor with a sense of hopelessness. That can become a disease that can destroy all our wonderful aspirations.

So I must say briefly, as briefly as possible—I could say much more about many things, and maybe you would like to ask me about some of these things later tonight—that this is a very worthy cause. It’s a small part of what is needed. But sometimes we set an example by a small effort. And hope that others will be inspired by what is accomplished by this small effort and hope therefore that that example will inspire others to do more.