This article appears in the May 6, 2022 issue of Executive Intelligence Review.

Mr. LaRouche issued the following statement Aug. 11, 1999 in his capacity as a Democratic Presidential pre-candidate. 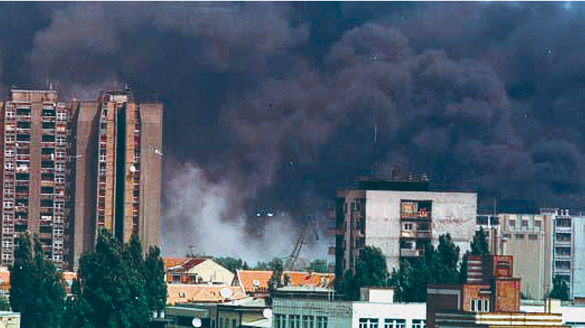 cc/Darko Dozet
For 78 days in 1999, NATO illegally bombed Serbia, expanding its targets to include civilian infrastructure, bridges, and hospitals. Here, smoke from bombing blackens the sky in Novi Sad.

Among those who are paying attention to reality, one of the two big questions of the day is, “Is Nuclear World War III Now Inevitable?” My answer is, that I believe it is not inevitable; but, the danger is serious enough that serious people will ask themselves that question.

The drive toward a nuclear world war comes from the British monarchy, as the policies of the current Prime Minister and 1931 Ramsay MacDonald look-alike Tony Blair typify this impulse. However, although the British monarchy is by far the world’s dominant financial power, and also the world’s presently leading political power, the thrust for war depends upon that monarchy’s ability to push the world’s leading military power, the U.S.A., into adopting London’s current geopolitical adventurism.

It is from this standpoint, that we must understand the significance of madman Zbigniew Brzezinski’s current policies, which are more or less identical to those of Brzezinski crony and U.S. Secretary of State Madeleine Albright. For maniacs such as Blair, Brzezinski, and Albright, the orchestration of the recent war against Yugoslavia was only the prelude to a nuclear confrontation with Russia, in Transcaucasia and Central Asia more widely. Blair, Brzezinski, Albright et al., are depending upon their belief that this drive toward a nuclear confrontation with Russia is a strategic bluff, to which they are confident that Russia will back down. London’s attempt to orchestrate a nuclear attack on India, by London-controlled assets in the Pakistan military, is part of the same post-Balkan-War thrust. There, in brief, lies the risk of an actual nuclear World War III.

What these nuclear maniacs, such as Blair, Brzezinski, and Albright, assume, is that Russia could not win such a war. They have asked themselves the wrong question. Perhaps Russia has no hope of winning such a war; but, perhaps the U.S.A. has no hope of winning it, either. Even if the U.S.A. might appear to secure a victory in such a showdown, just as the famous King Pyrrhus defeated the Romans in one battle, perhaps the U.S.A. would not long outlive the end of such a military confrontation.

Go back to 1905, where we may find a comparable case. Recall the discussions between the two cousins, Kaiser Wilhelm of Germany and Czar Nicholas of Russia, discussing the need to spoil their uncle’s, King Edward VII’s, clear intent to push them into war against one another. When the two cousins failed to prevent the British from manipulating them into war against one another, the result was that both lost the war, and the Czar lost more than that.

The British monarchy’s use of its assets in Turkey, to orchestrate a post-Balkans spread of warfare throughout Transcaucasia, and into Central Asia beyond that, has already erupted into open warfare in the north Caucusus, and threatens to pull fools in NATO into military deployments against Russia, in both Transcaucasia and in Central Asia. This would constitute a threat to the very continued existence of a Russia which is still a thermonuclear power. Russia’s warfare capability would then go on alert status.

When one presents a chosen adversary with an absolutely hopeless situation, that adversary may find itself impelled to strike back in absolute desperation. As every qualified military professional since Machiavelli knows, what NATO is implicitly threatening to do, creates precisely the kind of military situation, in which the unthinkable may become the inevitable. When the fires of hatred are stoked to the highest possible degree in the passions of the intended military victim, all ordinary strategic and diplomatic calculations, especially the calculations of madly desperate fools such as Blair, Brzezinski, and Albright, are no longer controlling. There lies the short-term risk of an actual, early outbreak of nuclear war-fighting.

Now, look at another crucial element of the same strategic equation: the current world economic situation.

It is an open, repeatedly verified fact, that, since 1989, the U.S.A. and NATO as a whole, have lost the ability to conduct regular warfare. The chief reason is economic. As in “Desert Storm,” and as is shown in the resumed war on Iraq, and the recent war against Yugoslavia, NATO is not capable of fighting war to win with military force on the ground. The very adoption of the lunacy of “Air-Land Battle 2000” by the U.S.A. attests less to what the U.S. military forces can do, than what they have lost the capability of doing.

In the war against Yugoslavia, NATO did not fight war; indeed, both NATO and the President of the U.S.A. insisted, that this was a punishment expedition, not an actual war. What NATO’s bombing attacks did, was to destroy the economy of most of the nations bordering the Danube east of Vienna. Once the British monarchy prevailed upon President Clinton to abandon the reconstruction perspective he had announced earlier, that entire region of southeastern Europe has been transformed into a bloody mass of attrition which will soon destroy, chain-reaction style, the entire economy of both northern and western Europe.

To assess the larger strategic realities in which the Blair-driven search for nuclear confrontation with Russia is situated, the war-threat becomes more immediately ominous than would be implied by the facts I have referenced thus far. We must take into account the strategic military implications of the presently onrushing meltdown of the world’s financial system, including that of the U.S. economy.

Significantly, the British state apparatus (representing a much higher level than lackey Tony Blair) has announced a special security program, named “Operation Surety,” to go into effect, beginning September 9, 1999. This operation is designed to anticipate a deadly social crisis’s eruption under the conditions of the world financial meltdown expected for the interval between September 9, 1999 and the close of the year. No one I know—and I do have many high-level sources in various parts of the world—can give me a definite date, other than “soon, perhaps next week, perhaps October,” for the expected date of the chain-reaction collapse of the world’s financial system. However, that kind of collapse, of a kind far worse than October 1929, is already onrushing; it is not something which could happen; it is something which, in fact, is already happening.

The intervention of the effects of this world financial collapse into the present strategic situation, automatically and immediately changes all of the determining parameters of the worldwide strategic situation. No existing government could last long enough to carry out a pro-warfare posture effectively under such circumstances.

Were I President of the U.S.A., I would know how to deal with this mess. Given the very advanced state of sundry presently ongoing world crises, I could not guarantee success, but I am the only figure who might have a chance of success.