Lyndon LaRouche:
‘We Must Choose a New Road’ 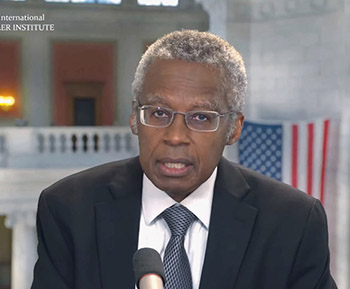 The conference “Inspiring Humanity To Survive the Greatest Crisis in World History” was opened by a performance by the Schiller Institute New York City Chorus, of the first movement of J.S. Bach’s “Magnificat”. The first panel’s moderator, Dennis Speed, noted that “The conference is dedicated to the 100th birthday of the co-founder of the Schiller Institute, the economist and statesman Lyndon LaRouche” and LaRouche’s “use of physical economy as a weapon in the battle to inspire humanity to be better than its destiny.” To set the stage, Speed then introduced this excerpt from a presentation by LaRouche to a seminar on African economic development, on June 18, 1997, a time of many conflicts in that great continent. 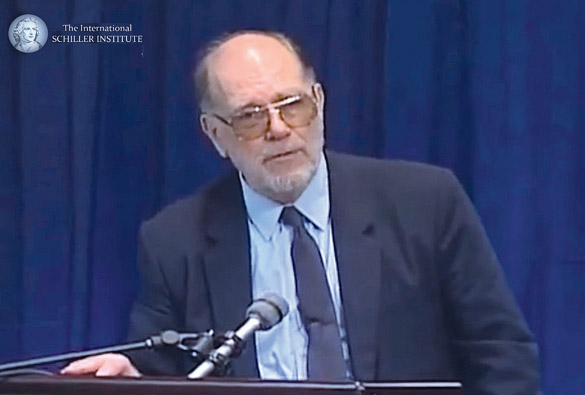 LaRouche: People are clinging to the delusion of something they’re going to lose. And, they are unwilling to accept the reality, that we—as a soldier in war sometimes has to face—the reality, that we must choose a new road. So, what must we do? We must use the precious little time available to us, to organize around alternatives, which we may not yet have the political support to implement, but which will work; and when there is obviously no other alternative, masses of people will rally around these things.

But if they don’t know about these ideas, if we don’t organize around these ideas, then the time of crisis comes, they’ll just go crazy. Because they don’t have a clear conception of an alternative….

That is the world situation today. An immoral civilization is going to its doom, a self-imposed doom. We’re well rid of it, because it would kill us, sooner or later, anyway. The question is, have we the courage to adopt an alternative, and do we know what the alternative is….

We must establish the axiomatic rule—not a do’s and don’t’s list—but an axiomatic rule, that no policy must be made, which is not consistent with the fact that every human being is made in the image of God; and that their life is sacred on that account. Not only their biological life, but their right to development, and their right to participate in society on the basis of that principle.

That relations among states, relations within states, laws passed by governments, must submit themselves to those principles. The only hope we have, is to look at this horror, and turn this horror of Africa—horrors which are similarly represented in other places—and turn that into a lesson, quickly, and say, this is what we are seeing: We are seeing a great civilization which is destroying itself, because it has denied the right of human beings, in Africa, and elsewhere, the right to be treated as persons created in the image of God; has denied them the right to participate in their society, the right to honor their ancestors, for what the ancestors gave them; the right to give their posterity what their posterity has a right to expect of them.

And we must restore law, that principle of law. We must use the crisis, which discredits this enemy of ours within—this great financial crisis, this collapsing system…. We must intervene in that; introduce a new dimension of passion into that, and say, we need a new civilization. We need the right turn in the road, as we go from the broken past to the hopeful future.

Speed: We have a message from a prominent Russian economist, who sent a personal birthday greeting on the occasion of Lyndon LaRouche’s 100th birthday. We are going to read a few short quotes here, with the hope of making the entire message available in the near future.

This year, progressive people around the world are observing the centenary of the birth of the brilliant thinker—and I wouldn’t hesitate to say, prophet of our time—Lyndon LaRouche. If the leaders of the world’s nations had listened to the voice of Lyndon LaRouche, then perhaps we might have managed to avoid the social upheavals we confront today as a result of the collapse of the world financial and economic system.

If LaRouche had been elected President, the world today would be developing in a stable fashion. There would not be the growing chaos; there would not be the worldwide wars and provocations. And in practically all the major countries in the world today that are developing successfully—above all, India and China—there are partisans of LaRouche. They have used his thoughts and ideas for creating their economic miracles. It is the principles of physical economy that he championed, that today underlie the Chinese economic miracle, and are there in the foundations of India’s economic development policy. Lyndon LaRouche turned out to be right.

Today, we rely on his work, his writings in composing proposals for very rapid transition to a new world economic paradigm. As we can see, countries that are taking this path are enjoying success. We have to muster all of our forces to fight that evil of war, and the creative legacy of Lyndon LaRouche helps us in this. May his memory live forever. 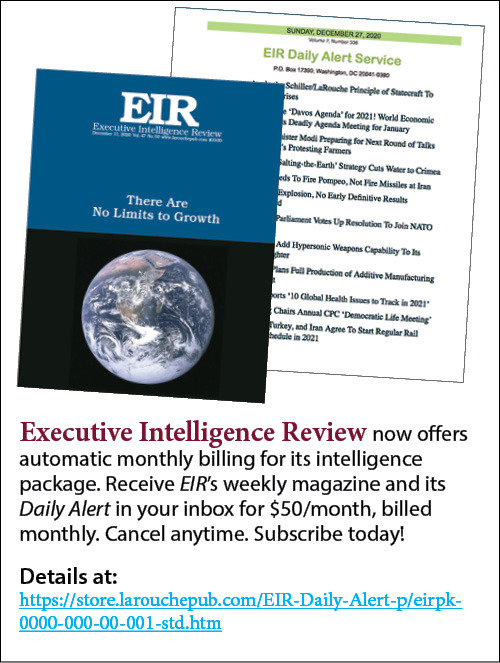