This article appears in the January 29, 2016 issue of Executive Intelligence Review.

Jan. 24—On a ground-breaking visit to three major countries in the Middle East—Saudi Arabia, Egypt, and Iran—from January 19 to 23, President Xi Jinping brought to this war-torn region a message of hope and optimism, through his commitment to revitalize the Middle East by linking China’s plan for a New Silk Road with these, the countries of the ancient Silk Road. This move now promises to overturn the rules that have hitherto prevailed in the region, long a playground of British financial interests, one which they have used to keep the world destabilized and on the brink of war.

While China has long had interests here, receiving much of its oil and gas from the Middle East, it has kept a low political profile in an area long dominated by Britain and the United States. During the Bush-Obama regimes, the entire region has been subject to a major destabilization that has created chaos and devastation in its wake, with the potential for leading to a new world war. Following on Russian President Putin’s historic intervention against terrorism begun last Sept. 30, the high-level Chinese intervention has the potential to turn the situation completely around.

In an article published in the UAE newspaper Al-Ittihad, author Mohammed Aref expresses the sense of optimism engendered by the visit. “China is redrawing the map of the world, turning the seven continents into six by making Asia and Europe one continent,” he wrote. In the article, Aref also notes the key role of the “Silk Road Lady,” Helga Zepp-LaRouche, in spearheading what is now the main thrust of China’s foreign policy, to which she has given the name, the New Silk Road.

But this New Silk Road, or what the Chinese call the Silk Road Economic Belt and the Twenty-first Century Maritime Silk Road, is not simply a project for economic cooperation, but rather is a new paradigm for relations between sovereign nations. The strategic significance of the Silk Road narrative is not lost on the countries visited by the Chinese President. The old Silk Road, dating back 2,000 years, was in many respects a Golden Age for the countries of the Middle East and Central Asia. While Europe was immersed in the Dark Ages, there was a flourishing of culture, art, and science in the great capitals of Central Asia and the Middle East. In fact, it was through Latin translations of Arabic works, often by Jewish scholars in places like Andalusian Spain, that the first glimmerings of the literary and scientific work of the ancient Greeks were made known to the West. In that era, China and the countries of Iran, Egypt, and the Arabian Peninsula were involved in a great union of trade and cultural exchanges. The message of the Chinese President is that that era can be revived with Twenty-first Century methods.

Prior to Xi’s departure for the Middle East, the Chinese Foreign Ministry issued an “Arab Policy Paper,” the first of its kind, which outlined an agenda for cooperation with the region. The occasion of the publication was the 60th anniversary this year of the establishment of diplomatic relations with an Arab country, Egypt. But the paper would also provide the groundwork for Xi’s visit.

“Over the past 60 years,” the paper says, “China-Arab friendly cooperation has made historic leaps in breadth and depth. It has become a model of South-South cooperation and gained the following successful experience: Both sides have always respected and treated each other as equals and remain brothers, friends, and partners no matter what happens on the world arena; both sides have insisted on the principle of mutual benefit, win-win, and common development, and have pursued common interest and sustainable development no matter what changes or developments take place on either side; and both sides have promoted dialogue, exchanges, and mutual learning among civilizations, and have always respected each other’s social system and development path no matter what differences exist in ideology.”

It is precisely such a relationship, based on mutual respect, that China has been attempting to build with its neighbors in the “One Belt, One Road” strategy. The interventionism and unilateralism practiced by the Bush and Obama administrations, dictated by their British game-masters, has caused havoc in the region. Establishing peace requires a new paradigm in international relations, and this is what China is trying to establish.

In Saudi Arabia, the first stop on his trip, Xi witnessed the signing of fourteen agreements, including agreements on oil production and nuclear energy, and an agreement to work toward a free-trade agreement with the countries of the Gulf Cooperation Council (GCC) by the end of 2016. In Saudi Arabia, President Xi met with Saudi King Salman bin Abdulaziz al Saud, Saudi Crown Prince Mohamed bin Salman, the speaker of the Majlis (Consultative Council), and the head of the GCC.

The second stop on Xi’s trip was Egypt. China has increased its cooperation with the country since President Abdel Fatah al-Sisi took power and re-established some order in a situation that was quickly spinning out of control under the Muslim Brotherhood president, Mohamed Morsi. China views Egypt as a major hub on the Belt and Road, with the newly improved and expanded Suez Canal now able to service a much larger amount of expected shipping from the Asia-Pacific region.

In an article published in Al-Ahram, the major Egyptian daily, prior to his visit, President Xi outlined a development perspective: “The aspiration of the Arab people for a better life not only provides the momentum for reform, it also lays the foundation for regional stability.” “By jointly developing the Belt and Road Initiative,” Xi wrote, “the two sides can link up our respective development strategies, [and] deepen and expand cooperation in energy, trade and investment, infrastructure and high technology. China welcomes Egypt and other Arab countries to get on board the fast train of its development and hopes that our respective development and growth could be well-aligned and mutually reinforcing.” The two sides signed 21 trade agreements, including a broad five-year cooperation agreement. These included agreements on cooperation in civil aviation, electricity, higher education and science, media, banking, and trade. China will invest $15 billion in Egypt in infrastructure projects, including a China-Egypt Suez Economic and Trade Cooperation Zone, which is slated to provide employment to 10,000 Egyptian workers. China will also invest in the construction of a new Egyptian capital city just east of present-day Cairo.

In Cairo, President Xi also gave an important speech to the Arab League in which he underlined the thrust of his policy for the region as a whole. “The key to overcoming difficulties is to accelerate development,” Xi told the members of the League. “Turmoil in the Middle East stems from the lack of development, and the ultimate solution will depend on development, which bears on everyone’s well-being and dignity. It is a race against time and a struggle between hope and disillusion. Only when young people are able to live a fulfilled life with dignity through development can hope prevail in their heart. Only then will they voluntarily reject violence, extremist ideologies, and terrorism.” Xi also reiterated China’s support for an Israel-Palestine two-state solution and the creation of a viable Palestinian state with its 1967 borders.

President al-Sisi also hosted the Chinese President on a tour of the Luxor Temple, more than 3,400 years old, stressing the relationship of these two ancient cultures. Both presidents viewed performances under the stars at Luxor by both Chinese and Egyptian performers.

Finally, President Xi visited Iran, the first head of state to do so in the aftermath of the signing of the P-5 nuclear agreement with Iran, in which China was a key participant. Iran, especially, has its own history as a key country along the ancient Silk Road. Many of the surviving documents and contracts from the old Silk Road period were written in languages stemming from old Persian and much of the culture of the ancient Silk Road was also Persian.

by the Chinese President published in the Iranian newspapers a day before he arrived, Xi wrote: “Over 2,000 years ago during the Western Han Dynasty in China, the Chinese envoy Zhang Qian’s deputy came to Iran and received a warm welcome. Seven centuries later, during the Tang and Song dynasties, many Iranians came to China’s Xi’an and Guangzhou to study, practice medicine, and do business. In the Thirteenth Century, the famous Iranian poet Saadi wrote about his unforgettable travel to Kashgar, Xinjiang. In the Fifteenth Century, a renowned Chinese navigator, Zheng He, from the Ming Dynasty, led seven maritime expeditions, which took him to Hormuz in southern Iran three times.”

More recently, China has had a long-standing economic relationship with Iran since 1971, which was not curtailed during the days in which economic sanctions kept other countries away. While 140 countries have now sent delegations to Tehran, eager to cut deals with the Islamic Republic of Iran, the Chinese still maintain something of a special status with Iran. This was particularly stressed by Supreme Leader Ayatollah Ali Khamenei who, in his meeting with the Chinese President, said that Iran still mistrusted the West, but that China was seen as an old friend. The two countries signed an unprecedented 25-year Comprehensive Cooperation Agreement coordinating the two nations’ respective development agendas. They also signed a Memorandum of Understanding on Jointly Promoting the Silk Road Economic Belt and the Twenty-first Century Maritime Silk Road.

Iran and China signed seventeen documents for cooperation in economic, industrial, cultural, and judicial fields, including an agreement between Iranian and Chinese nuclear chiefs for peaceful energy cooperation. Others agreements involved environmental cooperation, financing of a bullet train railway, and banking cooperation. President Rouhani called this a “new chapter” in the two countries’ relationship.

The visit of the Chinese President to the Middle East has indeed signaled a “new chapter” in the history of the Middle East. The historic decision by Russian President Vladimir Putin to help Syria fight terrorism, successfully judoed attempts by Obama and the British to launch war in Europe and begin a new round of “color revolutions” in the Mideast. Now, the visit of the Chinese President has provided the basis for a new paradigm in relations among nations, based on the mutual interests of them all, and a revival of those elements of their cultures which represented a high point for humanity. As the New Silk Road will be traveled more rapidly by high-speed rail than was the ancient road by camel, the great values of cooperation and mutual benefit characteristic of the old Silk Road can be transmitted more rapidly on the new one. If the project is brought to fruition, these nations—which provided such an important role in the advance of human civilization 2,000 years ago—can again make a valuable contribution to the development of mankind on our planet, launching a new Renaissance for humanity. 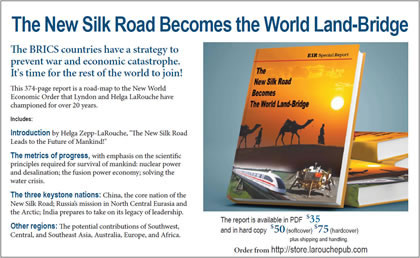