This article appears in the April 27, 2018 issue of Executive Intelligence Review. 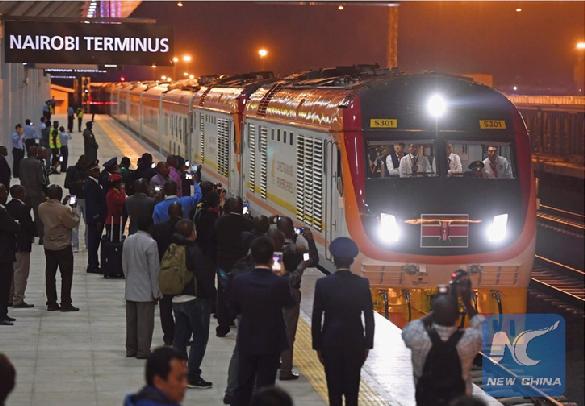 Xinhua/Chen Cheng
The first passenger train of the Mombasa-Nairobi Standard Gauge Railway arrives in Nairobi, May 31, 2017. A video overview of the project is “My Railway, My Story—Documentary about Mombasa-Nairobi Railway,” https://youtu.be/p9Z0eYHWFCI

P.D. Lawton, born in South Africa, is a member of Solidarité & progrès, the LaRouche movement in France. She is a researcher and writer on African affairs. This article is reprinted, with editing, from her website, African Agenda (English-language).

April 14—Amazing and wonderful things are happening all across Africa, as that continent begins a giant leap into a modernized incredible future! China is investing in African infrastructure at an astonishing rate, bringing the African nations into the New Paradigm and ‘Win-Win’ spirit of China’s Belt and Road Initiative. By issuing credit for the construction of mega-infrastructure, China is assisting African nations to invest in the future, investments based on the development of Africa’s physical economy! We are so fortunate to be alive in these times and to be able to witness the continent’s transformation with mega-development projects which will free the human creativity of Africa’s people and provide them with an economic renaissance.

The Mombasa-Nairobi Standard Gauge Railway (SGR) is the largest, most expensive infrastructure project ever undertaken in Kenya. Its 480 km of super modern construction traverses mountain ranges, wetlands and national parks. The project has found innovative solutions to a multitude of social, environmental and geographic problems in its journey from the Indian Ocean port of Mombasa directly into the interior of East Africa and Kenya’s thriving capital, Nairobi, home to over 4 million people. Mombasa is the largest sea port in East Africa and is its key trade gateway.

The old railway from Mombasa to Nairobi is over 100 years old and it could only carry 1 million tons of freight each year. The main highway is in poor condition and parts are severely over-crowded. Up until now the old railway and the motorway have been Kenyans’ only direct path between the coast and the interior. As the old railway deteriorated over the decades, the Rift Valley Railway Consortium of Kenya and Uganda reported losses of $1.5 million in 2014. 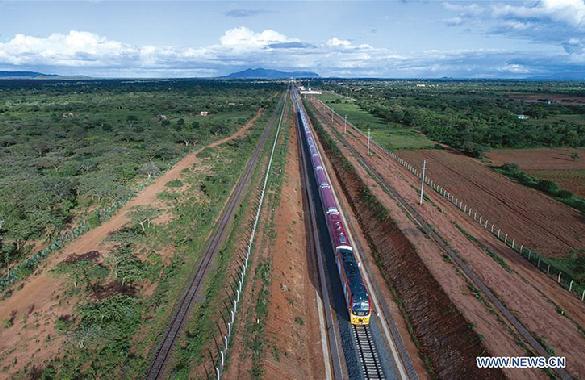 In 2009 the Kenyan government agreed to work with the China Road and Bridge Corporation to construct a standard gauge railway from Mombasa to Nairobi. Work commenced in December 2014. China’s Exim Bank has extended credit for 90% of the project. By May 2016, initial track laying was completed in just over 1 year. Passenger service was opened May 31, 2017, an astounding eighteen months ahead of schedule! Freight services commenced in January 2018.

The journey time between the two cities has been reduced from ten to four hours. It now takes less than half the time to travel the nearly 500 km—incredible! The economic advantages of reducing travel time and improving access between the port of Mombasa and Nairobi are immeasurable. This constitutes a qualitative improvement of the Kenyan economy, an advancement that will transform the economy beyond all previous limits. In a few years’ time it will become obvious that the $3.8 billion cost of this mega-infrastructure project will seem like nothing compared to the vast improvements it will make in developing the physical economy by building the country’s infrastructure, an incalculably sound investment in the future! Infrastructure is the key element of the physical economy without which manufacturing cannot develop.

Not only will the Mombasa-Nairobi Railway transform Kenya’s economy, it is also the first part of the Belt and Road Initiative’s Northern Corridor Integration Project (NCIP). It is the primary section of a planned series of railways to connect the Great Lakes region to the Indian Ocean. This is only the beginning of the radical economic transformation of not just Kenya, but also Burundi, Rwanda, Uganda, Democratic Republic of Congo (DRC) and also South Sudan. Through mega-infrastructure projects such as this and the Transaqua Project, the African interior will be transformed through economic development. As proven by the construction of the Mombasa-Nairobi Railroad, mega-infrastructure does not have to destroy ecosystems and national parks, all these things can be creatively designed in such a way that they can symbolize a dialogue and communion between man and nature and actually enhance the wellbeing of both humans and the natural kingdom. 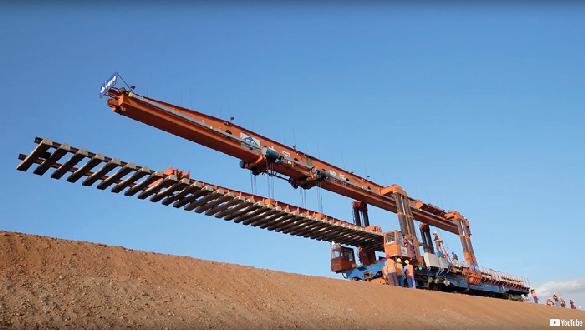 The Mombasa-Nairobi railway has provided 60 jobs per kilometer of line. More than 30,000 Kenyans are now employed including highly skilled professionals.

Ninety percent of the total railway workforce is Kenyan, including many women who have been selected on ability and are now working in various occupations, from site engineers to project supervisors and even plant operators—and they are loving it! There are also eight women train drivers who are part of a team trained in China in the operation of the highly sophisticated locomotives. This is a hugely positive human investment. The SGR train drivers were selected on the basis of ability and their passion for the project. 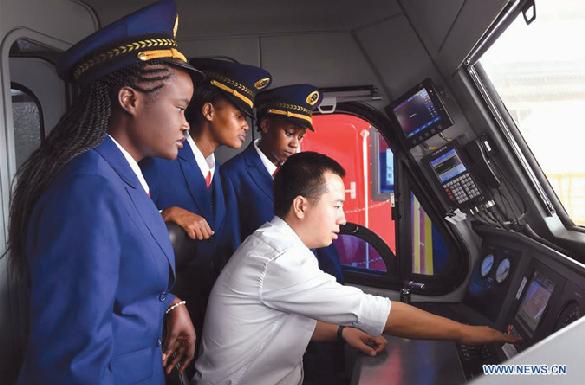 Factories were built along the route of the railway to make the required parts. Rail ties are used for support and transmission. These factories can make 1400 concrete ties per day as well as colossal steel T-beams weighing 143 tons each! On-site production increases efficiency, provides local employment and drastically reduces the overall production time.

Each section of track is composed of 44 rail ties spanning 25 meters and weighing 15 tons. It takes just 4 minutes to lay a track panel. There is a margin of error of less than 2 cm, and with perfect precision the railway fits together like a jigsaw puzzle! Seventy-nine bridges grace the course of the railway. The Ormagerigara Bridge is a colossal 807.46 m long.

The making of high-performance concrete for rail and bridge construction requires an ingredient called coal ash, also known as fly ash. Kenya has always had to import its fly ash. As demand for concrete was outstripping supply, the China Academy of Construction Research came up with a solution. They proposed using volcanic ash instead of fly ash. As Kenya is situated on the Great Rift Valley, it is abundant in volcanic ash, especially in the area near Nairobi. Tests showed that volcanic ash was a perfect substitute for fly ash. This is a fantastic discovery that solved an immediate problem, reduced the costs, boosted local production, invented a new industry, helped the Kenyan government from having to import fly ash, and provides a solution for all the countries on the Great Rift Valley of East Africa with an essential ingredient for construction and infrastructure. Wider applications will be found and who knows what else this discovery will bring. Amazing!

The railway passes through Tsavo National Park, which is the largest wildlife reserve in Kenya, which currently relies heavily on tourism. Tsavo covers more than 13,000 square kilometers and at its widest point is 240 km across. This ecosystem has around 13,000-14,000 elephants, a much loved and respected animal in Kenya and the world. When the railway was first proposed, environmentalist groups strongly objected to it on the grounds that it would destroy the natural beauty of the environment and disrupt and disturb the local populations of many species such as elephant, wildebeest and rhino. 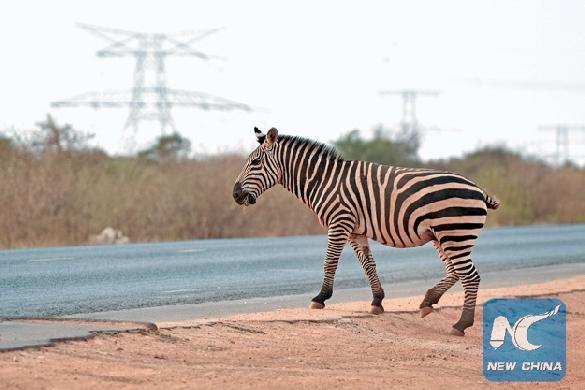 Xinhua/Sun Ruibo
Zebra leaving an animal passageway of the Mombasa-Nairobi railway in Kenya.

The Kenyan Wildlife Department was very concerned about the potential negative impact. China, however, had encountered similar problems in their own national parks and ecosystems. Drawing on years of experience, Prof. Zhang Jingqiao, who is the project designer of the Mombasa-Nairobi Railway, was able to apply extraordinary measures based on China’s past experiences to incorporate the needs of the local wildlife into the design and construction of the line. Similar problems were encountered in China when constructing the Qianghai Tibet Railway that traverses a particularly beautiful wilderness, home of the endangered Tibetan antelope. Thirty-three wildlife passages were built along the line, and over the past ten years the migratory animals have become perfectly accustomed to using these manmade corridors. This solution has been applied in Kenya and is proving to already be a success. Lions, elephants and migratory herds are all beginning to use the 14 corridors which are either bridges or culverts traversing the railway! Vast sections of the railway that cross Tsavo have been elevated on beautifully designed viaducts, leaving the wildlife completely unaffected! 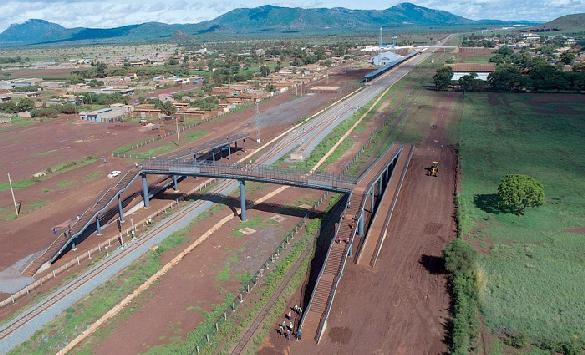 Xinhua/Chen Cheng
Pedestrian bridge near the Emali station of the Mombasa-Nairobi railway. It has been designed so that it can also be used as a livestock overpass.

Emali is a town of 25,000 residents that has been bisected by the railway. The movement of cattle is important to the lives of many from Emali, and the railway has created a problem for them. Another concern was that the line would separate the town’s two schools. The railway project’s community liaison officer discussed all these problems with the residents and proposed a pedestrian bridge to cross the line. The $2 million bridge had not been factored into the initial cost, but the Chinese project manager for that section of the line said that the additional cost was a worthy investment because it made the children’s lives safer. Within a month of the decision to build, the 700 ton steel bridge was completed and has reduced the children’s daily walking distance by 3 km. The bridge has also been designed so that it can safely be used by livestock as well as pedestrians.

The Mombasa-Nairobi Railway is proof that mega-infrastructure is a plus-plus investment; there are no negatives; the project only brings benefits. With creative solutions it is possible to overcome any and all obstacles, be they social, environmental or geographic. The lives of millions of people are being enhanced by investment in mega-infrastructure and the physical economy. With the Mombasa-Nairobi Railway as working proof of this principle, surely the wider public can now see that the Transaqua Project can become the single most important investment in the futures of millions upon millions of people in Africa. Kenya’s mega-infrastructure is proof that we do not need to destroy the environment in order to develop. Transaqua has the potential to completely re-write the history of the African interior and to transform the livelihoods and economies of all 12 participating nations.

Africa is on the brink of the most incredible future, working in conjunction with China’s Belt and Road Initiative and the New Silk Road. Development plans of amazing creativity can change the course of history, not just for Africans but for the entire world.