This article appears in the May 4, 2018 issue of Executive Intelligence Review.

The Science of Profit IsThe Profit of Science

April 28—“Ford Retreats from American Car Business in Penny-Pinching Push,” and “Ford Just Killed the Car” read newspaper headlines on April 26, 2018. The decision by Ford Motor Company to discontinue its lineup of sedans in favor of SUVs, crossovers, trucks, and, of course, the quintessential baby-boomer fantasy car—the Mustang, was driven by the desire to increase profits. But more significant than the shakeup in the product line, was the further announcement that there would be cuts in engineering, materials costs, and sales and marketing. The company expects to spend $5 billion less between 2019 and 2022 than previously planned in capital expenditures. All this is occurring under the tenure of James Hackett, the turn-around specialist, who was appointed CEO one year ago, replacing Mark Fields who, despite generating solid profits, was not making the stockholders or “the market” happy enough.

A few days earlier, LaRouche PAC policy committee member Bill Roberts, speaking to a meeting of supporters in the Detroit area, challenged the audience to think about profit from Lyndon LaRouche’s standpoint, asserting that the only legitimate source of profit is science, and that profit cannot be measured from the standpoint of money, but rather from the standpoint of increases in physical production which derive from scientific advances. Roberts used the example of Henry Ford (whose modern day company “just killed the car”) in buying out the Dodge brothers and other stockholders, so that he could reinvest the profits of the Ford Motor Company to build the River Rouge complex in Dearborn, the largest industrial complex in the world, rather than paying out fat dividends. The Rouge plant was started just seven years after the construction of the Highland Park plant, which housed the first automobile assembly line. Obviously the capital expenditures of Highland Park had not yet been recovered, and yet there was Ford, building something huge and new—a facility which ultimately employed 100,000 workers.

The contrast between monetary profit and true scientific profit reflects the challenge of presenting Lyndon LaRouche’s “Four New Laws to Save the USA Now,” issued in 2014. Excerpting those introductory sections which LaRouche himself highlighted, we have the injunction for the federal government to—

institute four specific, cardinal measures: measures which must be fully consistent with the specific intent of the original U.S. Federal Constitution, as had been specified by U.S. Treasury Secretary Alexander Hamilton while he remained in office: 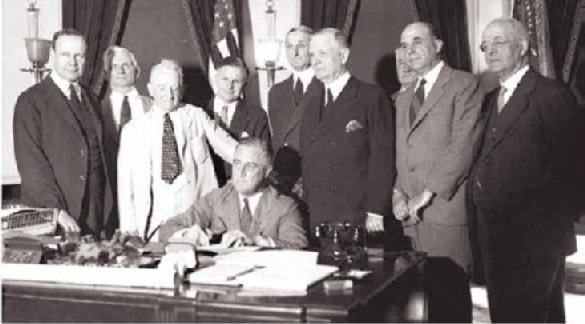 (1) Immediate re-enactment of the Glass-Steagall law instituted by U.S. President Franklin D. Roosevelt, without modification, as to principle of action. (2) A return to a system of top-down, and thoroughly defined, National Banking. . . . (3) The purpose of the use of a Federal Credit-system, is to generate high-productivity trends in improvements of employment, with the accompanying intention, to increase the physical-economic productivity, and the standard of living of the persons and households of the United States. . . . 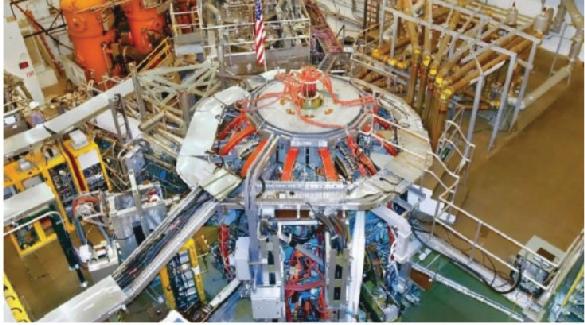 (4) Adopt a Fusion-Driver “Crash Program.” The essential distinction of man from all lower forms of life, hence, in practice, is that it presents the means for the perfection of the specifically affirmative aims and needs of human individual and social life.

But Americans are so contaminated by the language of money, it is often difficult to discuss those four laws in the order written. Take the first. Mention of Glass-Steagall often prompts the question, “Why don’t we have Glass-Steagall yet?” Why, indeed? President Trump is for it, Bernie Sanders is for it. Both the Democratic and Republican parties put it in their 2016 platforms. So why don’t we have it?

Glass-Steagall will never be reinstated by people who see it merely as a reform of a rotten Wall Street-dominated monetary system. And most of its champions and supporters view it that way. To the contrary, Lyndon LaRouche has always fought for it as an action necessary to restore and protect a commercial banking sector which exists within an economic system based on a principle entirely opposed to Wall Street’s monetarism and speculation. It is not a question of trying to rein in speculation; it is an intention rather to destroy monetarism and those principles which foster it.

Similarly, discussions of a National Bank often prompt, “Is that like the Federal Reserve?” or, at best, “How is that different from the Federal Reserve?” Discussion of the credit system works its way around to the inevitable: “Where does the money come from to pay the credit back?” Everything is thought of within the world and assumptions of the current monetarist system. By the time one gets to the Fourth Law, one has usually used up the attention span of the person on the other side of the discussion.

The Fourth Law: A New Language

If one pays attention to LaRouche’s Fourth Law, “Adopt a Fusion-Driver ‘Crash Program’,” one should be stunned by the next sentence: “The essential distinction of man from all lower forms of life, hence, in practice, is that it presents the means for the perfection of the specifically affirmative aims and needs of human individual and social life.” And later, “The healthy human culture . . . represents a society which is increasing the powers of its productive abilities for progress, to an ever higher level of per-capita existence.”

Needless to say, that is not the substance of discussions in Economics 101 classrooms or in corporate boardrooms. Nor is it only economics or business professionals who are clueless. Americans have no idea how thoroughly crippled they are by the metric of money when they speak about economics. It is like using a chimpanzee’s vocabulary to discuss Shakespeare’s sonnets.

LaRouche begins to introduce the new language, needed for discussing an economics based on the essential distinction of man from all lower forms of life, in the concluding “stretto” section of the Four Laws article. He says,

We call it “chemistry.” Mankind’s progress, as measured rather simply as a species, is expressed typically in the rising power of the principle of human life, over the abilities of animal life generally, and relatively absolute superiority over the powers of non-living processes to achieve within mankind’s willful intervention to that intended effect. Progress exists so only under a continuing, progressive increase in the productive and related powers of the human species.”

It could also be said: Profit exists so only under continuing, progressive increase in the productive and related powers of the human species. 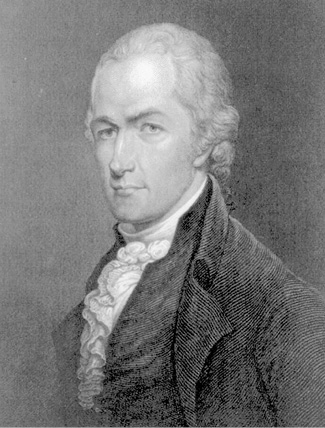 While this concept may be foreign to policy makers, business leaders, and citizens today, it was the essence of Hamilton’s great economic writings, and it shaped the mental life of the earlier American System industrialists and manufacturers. Two ideas in Hamilton’s writings have always stood out for me. The first is his assertion in his Report on the Subject of Manufactures, that the wealth of a nation is not its money, or its land, or its raw materials, or its gold, but rather the productive powers of labor.

The second, is his organization of the mission of the National Bank. While Hamilton knew that those who invested in the bank would need some kind of return on their investment, and he established revenue streams from taxes and tariffs to ensure those returns, he made clear that the mission of the Bank was not to make a monetary profit. The mission of the Bank was to benefit the nation as a whole. The Bank’s investment decisions were to be governed by that, not by the individual profit generated from an individual investment. Yet those properly made decisions would ultimately result in profitability throughout the economy. (Look at China’s Public Policy Banks today as an example.)

That was how Henry Ford thought when, in 1914, he decided to pay his workers $5 a day and reduce the workday to 8 hours. The reason commonly put forward—that this meant that his workers would then be able to buy his cars—doesn’t add up. Ford had about 13,000 people employed at his Highland Park plant, and even if every one of them bought a car, he would not recoup his outlay. It was about the productivity of labor, not only of his own workforce, but of the nation’s. Before the wage increase, Ford had to hire 57,000 men per year to keep 13,000 of them employed. The loss of productivity caused by that turnover was enormous. More significantly, that wage increase forced other manufacturers to improve the conditions of their workers, ultimately lifting up living standards nationally. Now, there was a market for his cars!

Similarly, the common idea that the purpose of the assembly line is to speed up the production process is embedded in the let’s-cut-costs-to-make-a-profit world. As described in the biography of William Knudsen (Norman Beasley, Knudsen: A Biography, Papamoa Press, 2017), the production genius who went from the Ford Motor Company to the presidency of General Motors, and then to the leadership of Franklin Roosevelt’s Office of Production Management at the War Production Board: “Knudsen and Ford each saw the automobile as a product of mechanical skill and not a product of mass production. They saw the conveyor as a carrier of material—nothing else. . . . The carrier produces nothing. It is a beast of burden leaving the mechanic free to do the work.” The worker should not be a beast of burden; he should be freed to use his skills and his mind.

This gets closer to the heart of the matter.

The early auto industry was a crucible for scientific and technological innovation. New materials came from increasing mastery over the chemical domain. New mechanical configurations came from applications of the “least action principle.” All of that came from the minds of workers. (In one case, a Ford floor sweeper made a suggestion which lead to a breakthrough. He went on to become the head of a major division.) This is what LaRouche calls “the machine tool principle,” the principle that turns science into true profit. On July 23, 1997, LaRouche spoke on this subject to a Washington, D.C. audience at an EIR seminar titled, “War on the British, or, How to Save the Economy”:

So, you construct what’s called an experiment. It’s called a crucial, or proof-of-principle, experiment, to prove that nature works the way your discovery says it works. That’s called a Machine-Tool Principle. Now, when you take the apparatus, which you used to construct that experiment, you walk into a guy who designs machine tools, or similar kinds of products. This guy, having seen your experimental device—he probably helped you build the experiment—now says, “Look, I can design a whole group of new kinds of products, and new kinds of machine tools, on the basis of this discovery which you demonstrated, by looking at your experiment, understanding your experiment. I can see how to build a whole new class of products and processes out of that.” . . . And that’s the way it works. You combine the development of the mind, with the development of the products and processes, which the mind’s discovery of principle has devised. And that’s how you produce—that’s called scientific and technological progress.

That is LaRouche’s Fourth Law, and that is called profit.